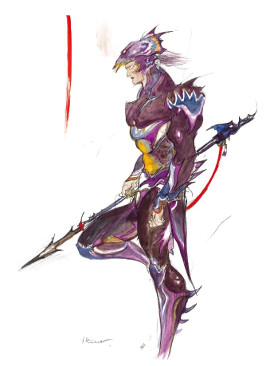 Final Fantasy IV begins with Cecil returning to the kingdom of Baron as captain of the Red Wings. This is after a mission to the village of Mysidia to relieve them of their elemental crystal. Cecil and his crew are upset with this mission and after voicing such concerns to the king he’s reassigned on a delivery mission to a nearby village. These events ultimately lead Cecil down a journey greater than he ever envisioned, meeting a variety of characters that gradually unveil the gravity of his fateful trip to Mysidia. The first three Final Fantasy games showed an evolution in storytelling and Final Fantasy IV is the culmination and realization of their potential. This entry could be called a turning point in the franchise’s narrative approach. The use of visual presentation and music scoring of certain scenes created moments with true emotional impact, exceeding what was expected to be seen in video games back in 1991. To keep this review spoiler free we won’t go into details to take away from the experience for newcomers, but us old timers are aware of how many amazing moments are to be found in this entry, some jaw dropping and some heartbreaking. The limitations in dialogue and animation may look outdated by modern standards, but a great story remains so after the passage of time, which thirty years after the initial release that can be said of Final Fantasy IV.

The characters and job system is a variation of what was seen in previous games. Like Final Fantasy II each character has their own predetermined name (which can be changed) and history in the world, but the player has no control over each character’s job unlike previous entries. This approach helps make the characters feel more developed as their abilities often tie into plot points. This also makes the player have to choose their battle strategy within the limitations of their current party, instead of just making a party with ridiculous melee attack power or being able to spam the boss with everyone casting Meteo. Some of the classes introduced in Final Fantasy III carry over with their own special commands. For example, dragoon Kain can deliver a devastating jump attack, summoner Rydia can call powerful monsters to aid the party in battle and valiant Prince Edward the bard can hide from the enemies when the rest of the party members fight the monsters. Okay, maybe not every job is a winner, but each character having an assigned class helps make them feel more developed and unique during their time with the player. 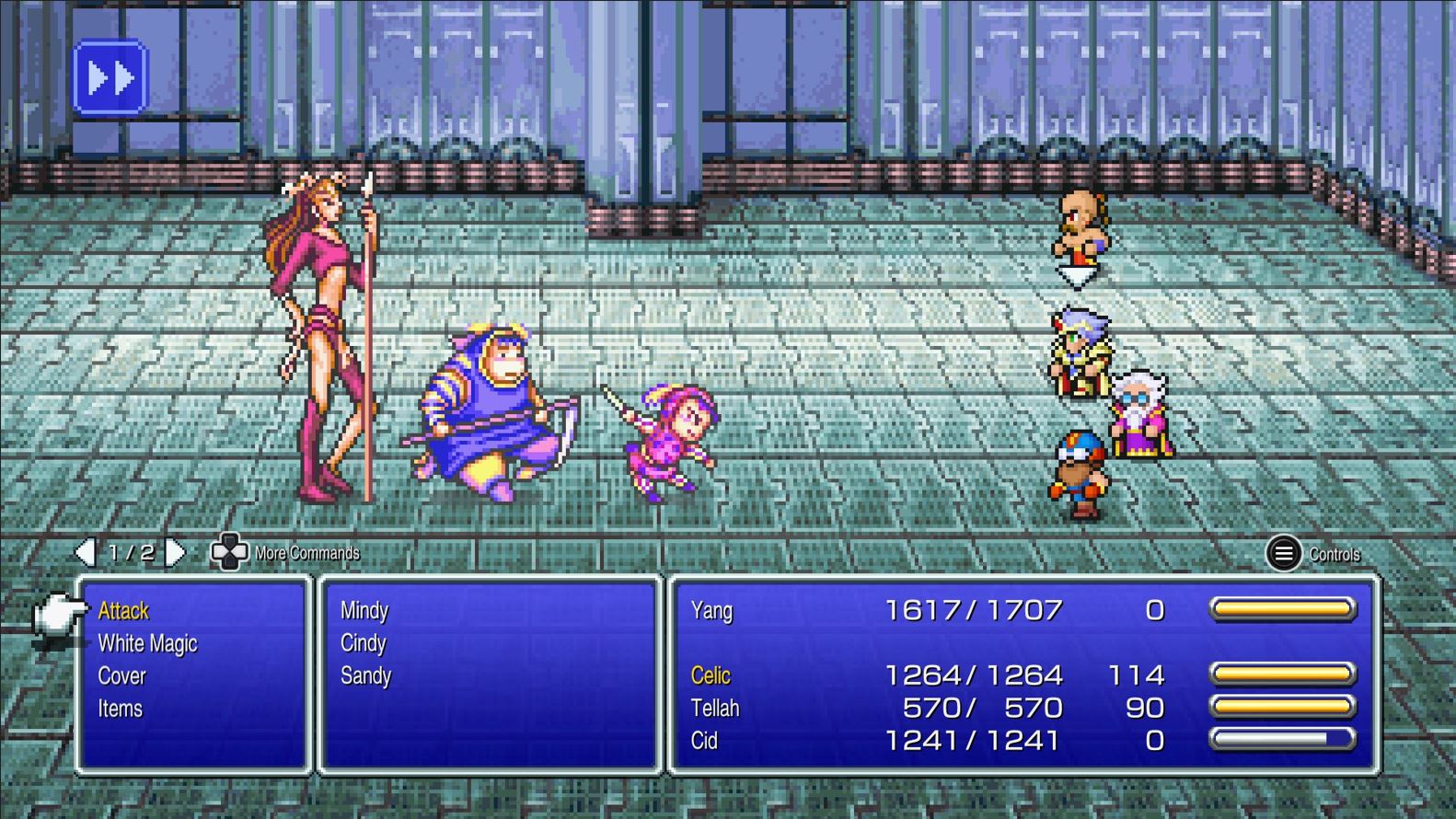 Final Fantasy IV doesn’t vary much in its overall gameplay from most of the other titles in the franchise. The player explores the world in an overhead view. Battles are initiated through random encounters. This entry introduces the active time element to the turn-based system, so instead of everyone being assigned a command at the same and then every action plays out in a random order, each character executes their action after its assigned, though certain abilities and spells may have longer cast times then others. The battle system is straight forward if you’ve played any other Final Fantasy or turn-based JRPG in general. A few weapons have useful effects if used as items in battle and there’s certain tricks with spells, like using Float to avoid earthquakes or Cure magic to damage undead enemies.

There have been a few different versions of Final Fantasy IV throughout the years. The SNES one was actually an easier, simplified version of the original Final Fantasy IV that most of didn’t get to play until years later when it was released on PlayStation as part of Final Fantasy Chronicles. The Pixel Remaster version is slightly more difficult than the original western SNES version, but easier than the PlayStation version.  Some of the character specific commands return in this version, such as Yang’s ability to focus power and Rosa’s ability to pray for some quick healing which can actually be beneficial depending on her equipment. The end game bonus content that was introduced in the Game Boy Advance version is absent, which seems to be the case with all Pixel Remasters. Maybe if these games ever get a console release they may add the bonus content, but that’s purely speculation. 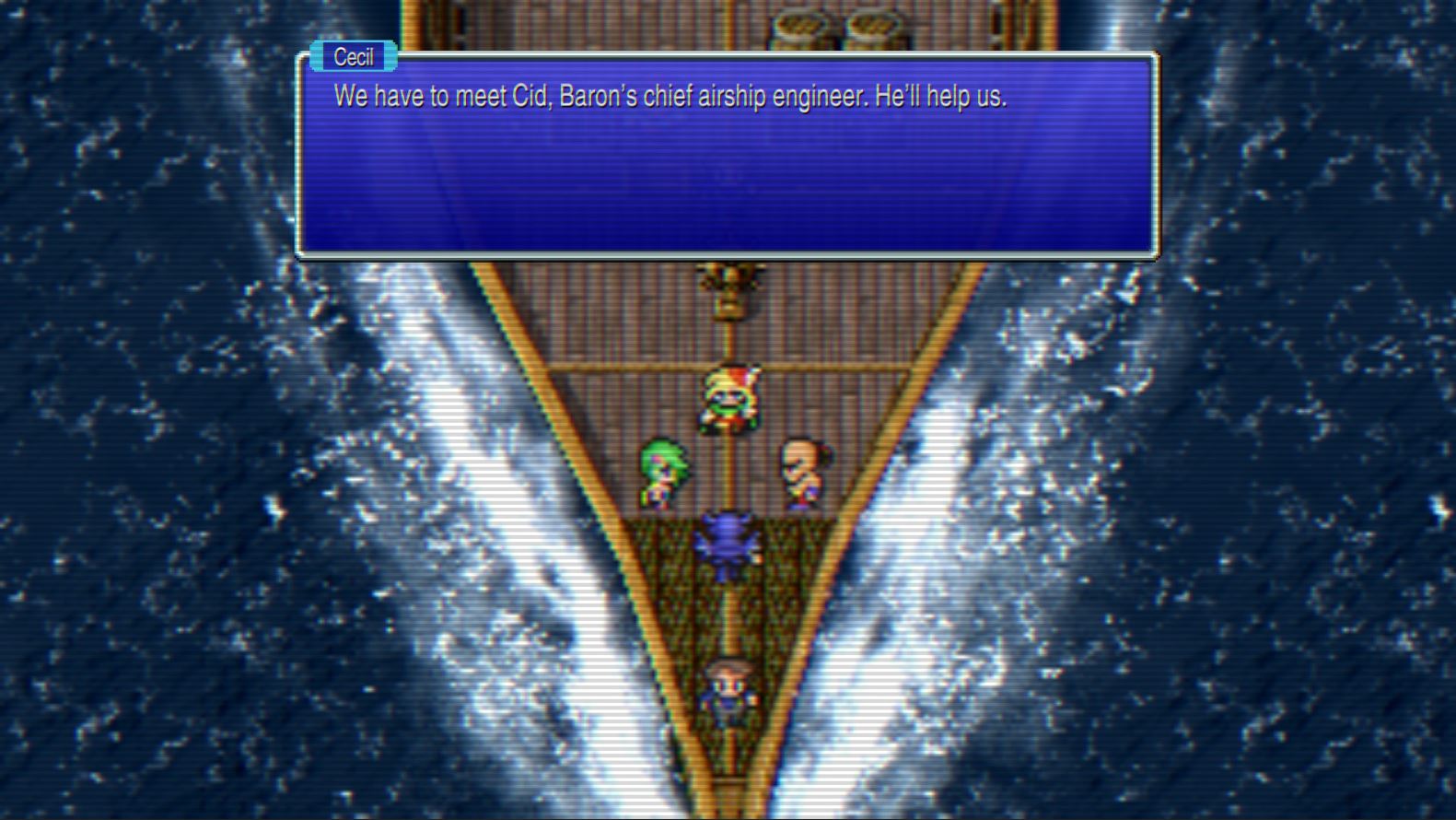 Now for the most anticipated point of discussion: the graphics. There’s subtle (and a few not subtle) changes to the character sprites and enemies, but for the most part are faithful recreations of their 1991 incarnations. Spell animations and environments have received more drastic changes where some parts look like it’s the merging of a 1991 game with a 1998 game. Opinions of this will vary among fans, but overall my personal opinion is I like how this version looks a lot. Pixel Remaster succeeds at what it was trying to do, which is create yet another version of the game that maintains the original looks while also updating it to look more contemporary. It’s a tall order, but the familiar character and enemy sprites combined with the current aspect ratio and more-detailed backgrounds and animations works well. The one drawback to the new aspect ratio is some of the larger monsters look smaller and less intimidating than their original version. A feature that’s included in this (and all other Pixel Remasters) is the option to turn on scanlines. Original pixel art in the CRT era utilized scanline placement to clean up the pixel art, smoothing some of the rough edges and adding details. Turning on scanlines (the Classic setting in the Configuration menu) does give the graphics an overall darker appearance, but also makes it look more retro. Both settings look good and it just comes down to personal preference, as turning on the scanlines enhances some aspects while diminishing others. The font used is the same as the other Pixel Remaster which is small and narrow. This might be fine on PC, but I imagine it would be nightmarishly small on the mobile versions or if the player has less-than-perfect vision.

Final Fantasy IV Pixel Remaster does the same thing the other entries have done, which is remake the games with enhanced graphics that are still reminiscent of the original games. For the first three games this was a drastic change, as they maintained the original look and style, but redid the 8-bit games in the style of the 16-bit games. Final Fantasy IV (and we can assume Final Fantasy V and Final Fantasy VI) looks a lot like the original but different. Pleasing all the fans with these releases is impossible. Most would probably say the PlayStation Portable version of Final Fantasy IV looks the best, some are clamoring for a remake in the style of the upcoming Dragon Quest III HD-2D Remake and others might want just a pure port of the original. While all of those hypothetical approaches sound appealing, the version we ended up with works well. The original designs are maintained enough in the new style so it checks the nostalgia box and the fresh coat of paint with spell animations and backgrounds are nice modernizing touches. It may not be the remake you were hoping for, but it’s still a great revision of the classic. 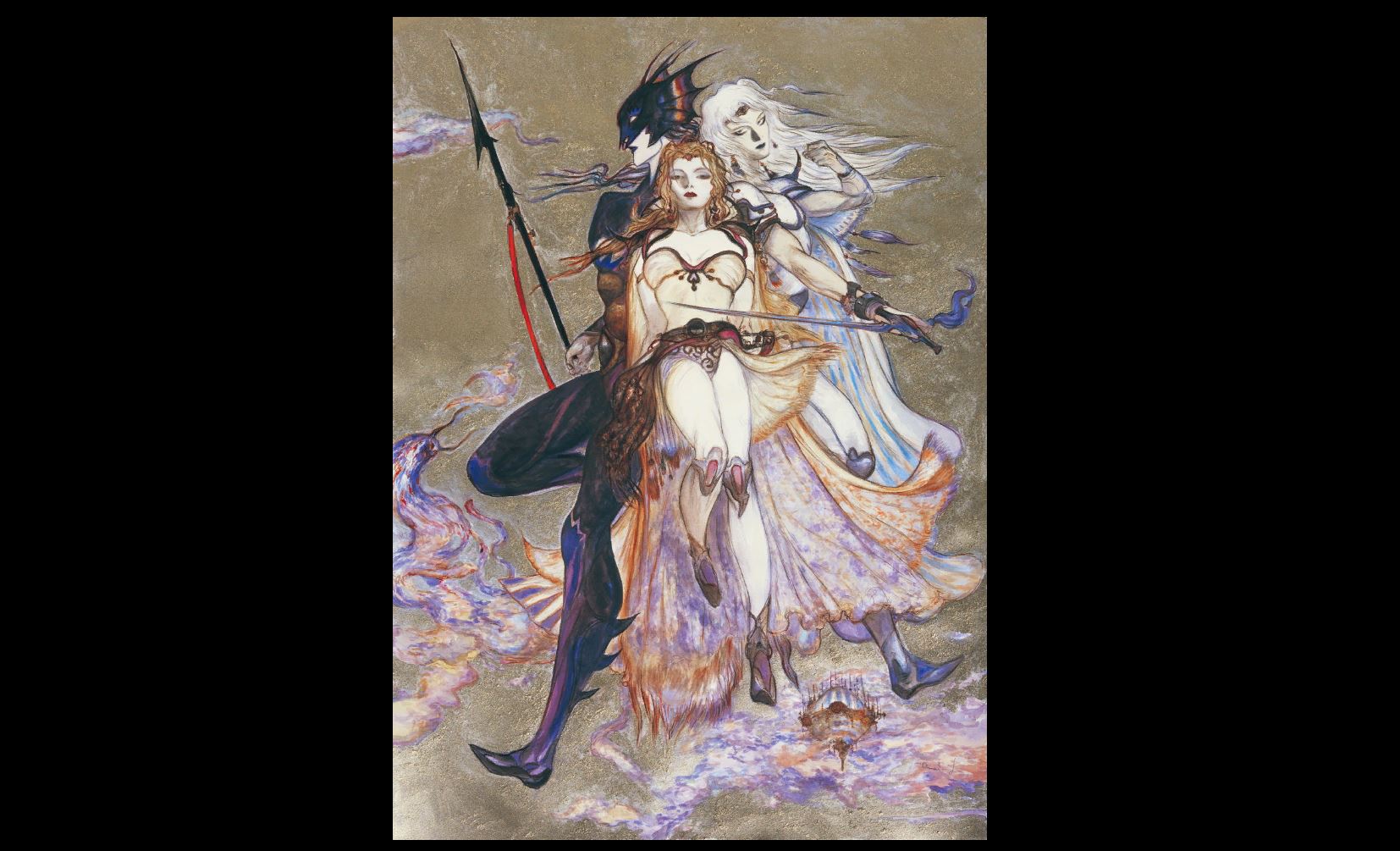 Opinions on the graphics may divide the fandom but the soundtrack will reunite them. The treatment to the graphics has gotten the most attention but even speaking as someone who likes the new look the remixed music is the true highlight of Pixel Remaster. All the music has been completely rearranged in a way that maintains the familiarity for long time fans but the overall sound quality is more akin to a recording by The Black Mages than a 16-bit MIDI player. The newly-arranged theme for Mysidia makes the magic users’ village spring to life when Cecil arrives, despite the overall context of his return visit. Conversely the new theme for a couple castles that lay in ruins sound like a requiem over the devastation the once proud kingdoms have endured. There are aspects about the Pixel Remaster games fans will be critical about, but the soundtrack should not be one of them as this is hands down the best-sounding version of Final Fantasy IV.

Everyone has a different favorite Final Fantasy, and when they were introduced to the series can often play a role in determining which one gets the honor. It seems to be the general consensus, however, that regardless of what someone’s number one favorite may be, Final Fantasy IV is one of the stronger entries in the franchise. There are a few different versions of Final Fantasy IV available, each with their own pros and cons. Saying Final Fantasy IV Pixel Remaster is the definitive version may be stretch, but it’s still an excellent choice. We’ll ignore the 3D remake since it’s so different, but out of the 2D versions it has the best soundtrack and second best graphics, with the PSP version taking that honor. It’s lacking the additional bonus dungeons from the GBA and PSP version and the ability to change party members at the end of the game. This missing content doesn’t hurt the game tremendously as the story felt complete in the original version, but out of all the tacked-on content in re-releases personal opinion is that Final Fantasy IV got some of the better bonus content. Its absence doesn’t hurt the game, but it’s understandable that many people would have preferred it be included. It does include a Bestiary, gallery of Amano’s original artwork and a music player. There’s also an option for auto battle, which can take the tedium out of grinding for the pink tail. 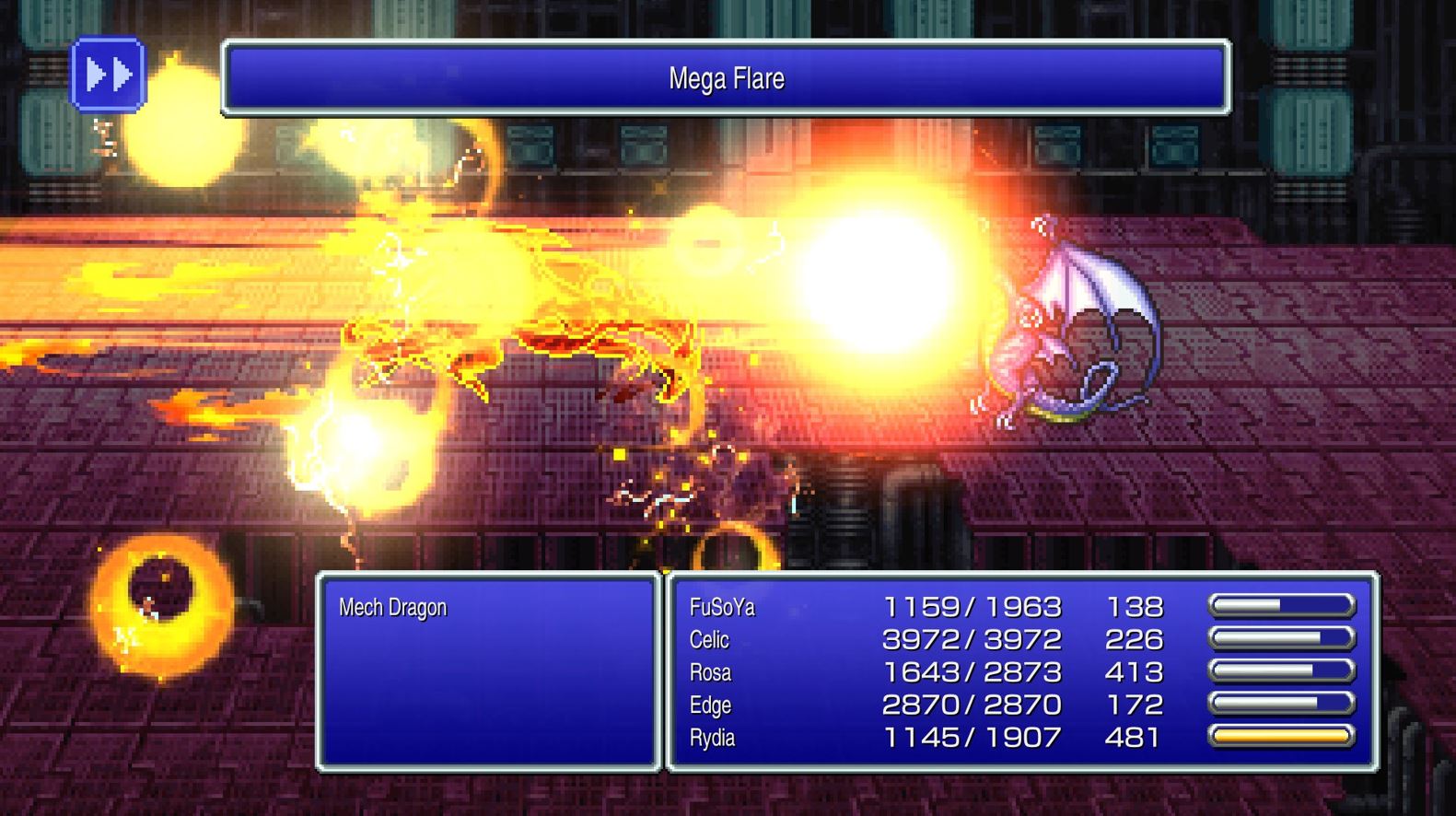 Final Fantasy IV Pixel Remaster might not be the definitive version of Final Fantasy IV, but it’s an excellent way to experience this classic, whether it be someone checking it out for the first time or a long-time fan replaying it for the umpteenth time. The redesigned graphics strike the balance between making a thirty-year-old game look less dated while still maintaining the essence of the original look, and Uematsu’s score has never sounded better. Final Fantasy IV is one of the best 16-bit RPGs with a strong story that holds up after all these years. Even though the turn-based combat and exploration with random encounters may seem simple compared to modern games, it’s still an enjoyable fourteen hour playthrough. This may not have been the remake everyone was hoping for, but Final Fantasy IV Pixel Remaster is a great version of a great game.