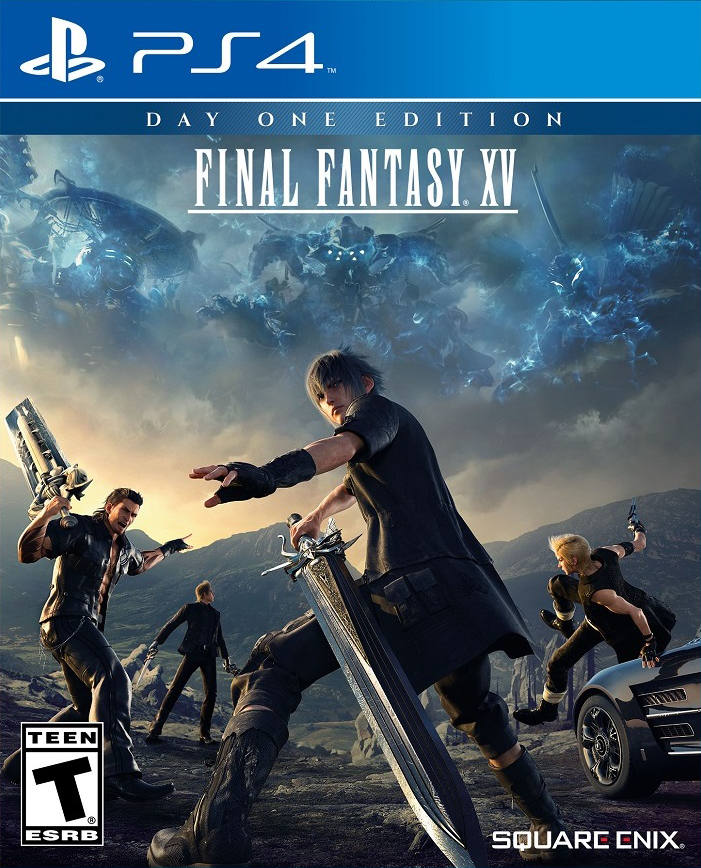 It finally happened: Final Fantasy XV released. To think, those in their mid to late 20s were in high school when the RPG was first announced as Versus XIII, and while there were those who doubted Square Enix’s ability to actually complete development on the project, the Japanese studio was somehow able to pull through. Quite a bit has changed over the last three years since it was re-announced as the fifteenth mainline title in the beloved series, but fans should be able to sleep easy knowing that a lot of what they were excited about has been retained. With a new combat system that blends fast-paced action with RPG elements, a vast open world to explore and what seems like an extensive universe that has already been expanded upon earlier this year, Final Fantasy XV is much more than a simple game; it’s something that Square Enix is banking on to keep the franchise at the top of the genre. For ten years of development, nineteen-hundred words won’t be able to do Final Fantasy XV much justice.

Let’s start off with probably the most unfortunate aspect of Final Fantasy XV: the story. Square Enix has set up a vast universe of immense potential, but they falter in the main game’s execution, telling a disjointed and disappointing plot. You play as Noctis Lucis Caelum, a prince to a prosperous nation that’s not in great terms with the other power of the world, Niflheim. After an invasion on your homeland, it’s up to you to restore balance to the world by winning over the favor of the Astra Gods Titan, Ramuh, Leviathan and Shiva. That’s more or less the plot in the nutshell as you’ll be put through a twenty-five-hour long journey with Noctis’ three best friends, Gladiolus, Ignis and Prompto. The story is not so much about the world, but these four individuals, among a couple of other supporting cast members, as they serve strong character building and chemistry. They are your family, and you get to know them better than what’s happening around the world. 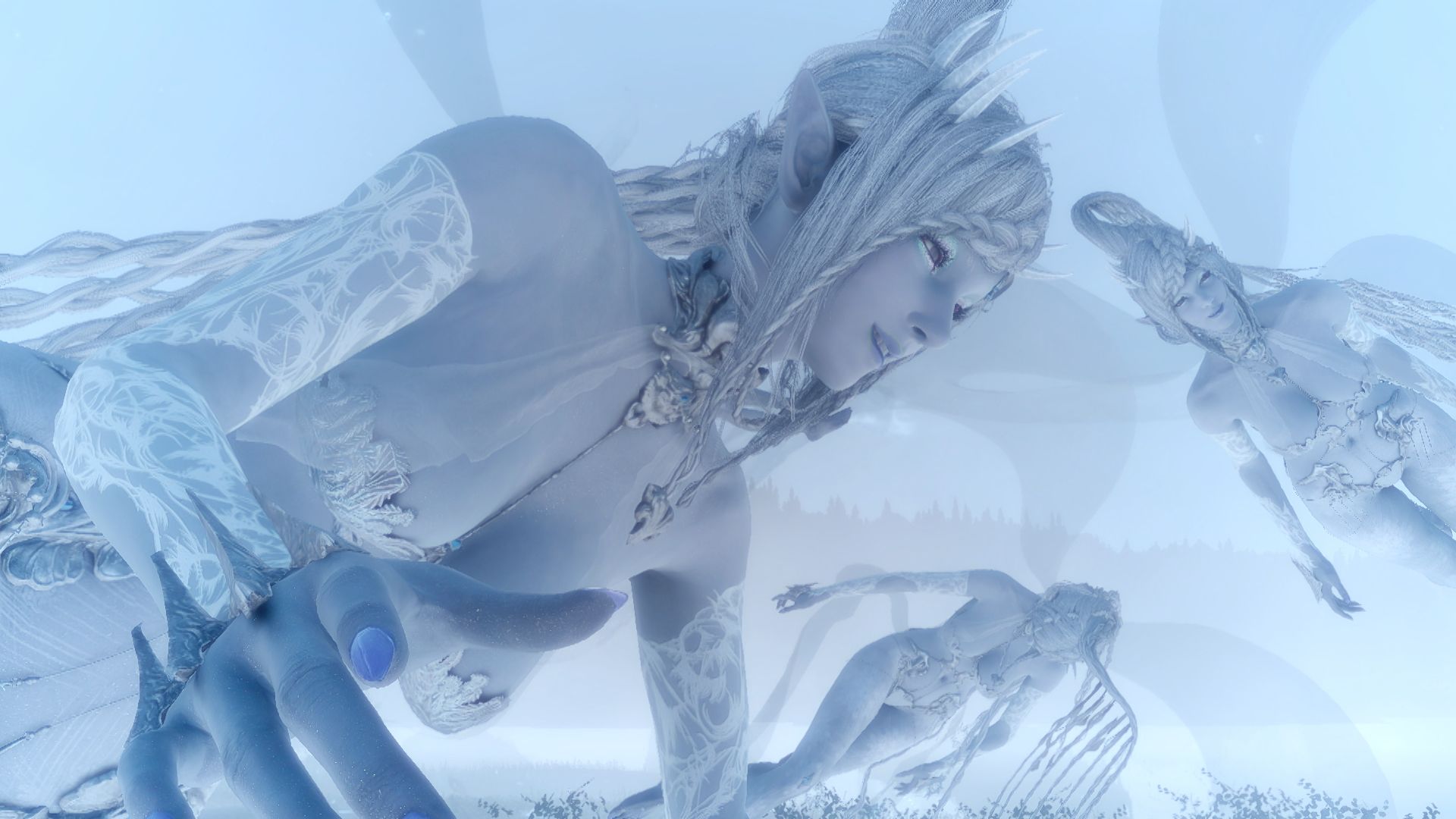 The biggest problem with the story is that it’s far too vague for its own good, never truly fully painting the whole picture. It’s a game entirely reliant on the various other forms of content released in the universe, as there a couple of instances through the early parts of the story where scenes from Kingsglaive and even the Omen trailer are spliced in with little to no context for those who have never seen them before. Those coming in fresh won’t necessarily be lost, but rather confused at the speed at which the developers try to tell the story. For example, Emperor Iedolas Aldercapt, who was the driving force behind the invasion on Lucis, and essentially the antagonist of Kingsglaive, is seen maybe once in an early cutscene and then quietly removed from existence. Same goes with Verstael who’s almost entirely absent, and even Ravus Nox Fleuret, the would-be brother-in-law to Noctis, is poorly established and has such little screen time that it makes you wonder why he’s even in the game to begin with.

The worst offender, though, is the progression as, while things start off a bit slow, they quickly ramp up in telling what resembles an intriguing plot for the first half. Unfortunately, the second half spirals out of control, as it’s apparent the developers were rushed to actually finishing the game. Players can easily plow through the final third of the game in six hours, but that time feels amplified because of how much of a slog it becomes. What ultimately ruins everything is the timeskip they allude to right at the beginning of the game. Usually timeskips are meant to better extend the plot, wrapping up one scenario and then starting something fresh, all the while showing how the world and its inhabitants have changed since. Final Fantasy XV doesn’t fall into this mold, but instead feels randomly thrown in with primarily only the main cast getting a slight facelift and the world just alluded to being worse off. It’s a baffling decision to an already middling plot that only crushes what’s supposed to be a far more emotional conclusion than it comes out to be. 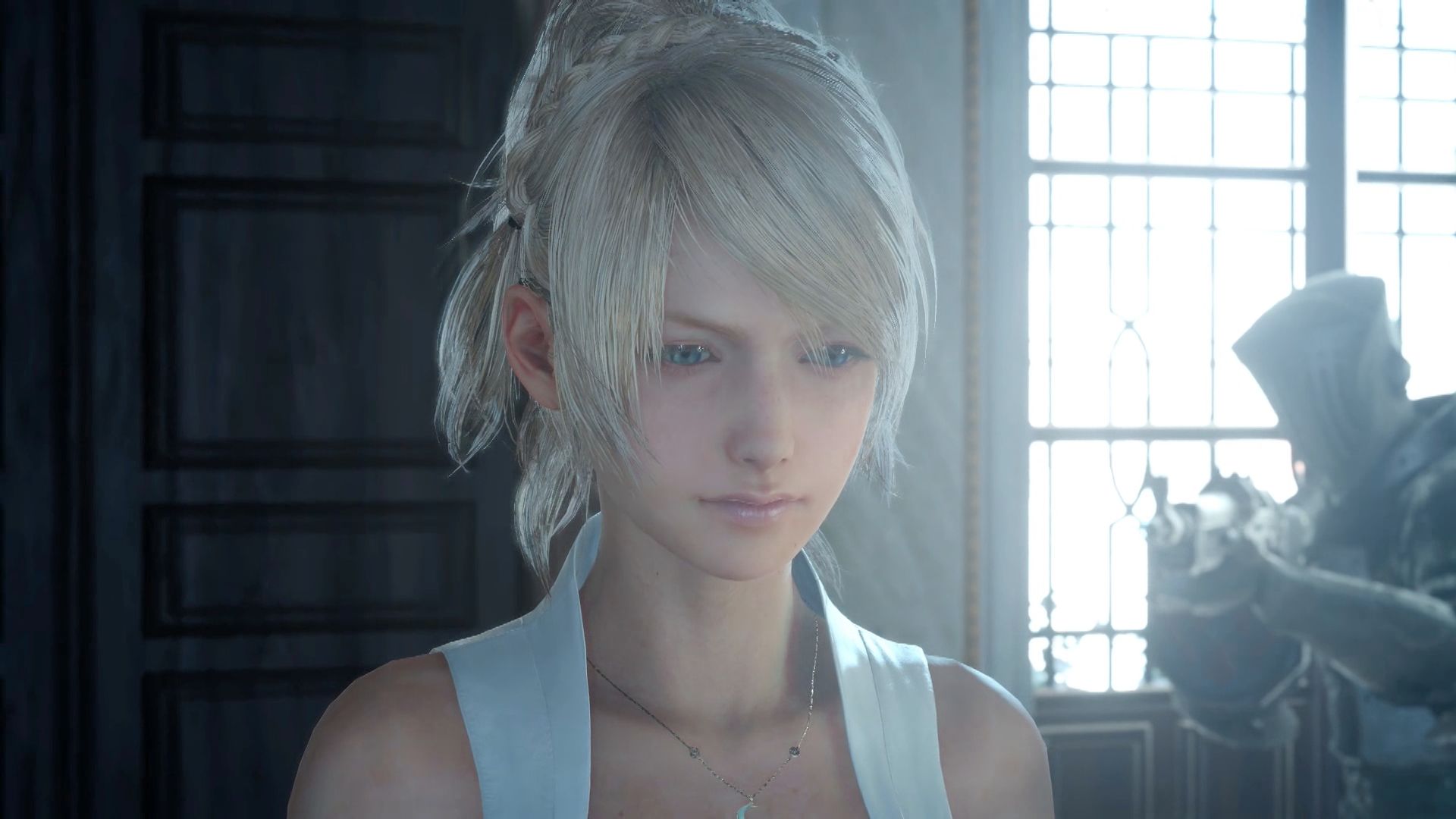 Fortunately, while the story is a monumental disappointment, the gameplay helps make up for it. The core combat isn’t like your traditional Final Fantasy game, but leaning more towards something like Kingdom Hearts. It’s an Action-RPG that runs entirely in real-time, even so much so that there isn’t a dedicated arena you enter when facing monsters; once you engage an enemy, you’re right in the thick of things. The combat, while a bit shallow, is incredibly enjoyable, essentially consider Noctis’ teammates will fluidly back him up with both offensive and defensive abilities. They act on their own, and they’re generally intelligent enough to get through most fights, even though it can be a bit frustrating when they don’t pick Noctis up from a downed state. You do also get a couple of guest characters throughout the campaign, but they end up feeling like teases you want more of, especially considering they come with their own unique skillset.

While this feels more like an action game, focusing on dodging and parrying attacks, this is still an RPG and there are various mechanics that support it. To begin with, the shared pool of Ascension points helps build up the four characters through various skill trees, be it teamwork, combat, stats, magic and so forth. The biggest difference is, while you still earn experience points, they’re not immediately used to level the characters up, but instead are banked. Players will need to visit an inn or campsite in order to boost their levels, which is a strange mechanic that forces Noctis and party to get some rest. Considering it’s discouraged to go out at night and encouraged to campout with your buddies, it makes somewhat sense, but it’s still an out of the ordinary mechanic.

While there are still some RPG elements to be found, Final Fantasy XV veers away from some of the staples of the genre. We’re not necessarily talking about control or experience point distribution, but rather the way weapons and spells are selected. There aren’t any menus during combat, but instead weapons and magic are assigned to the d-pad. You can switch between different types of weapons on the fly, which is very helpful considering enemies have different weaknesses and strengths that need to be taken advantage of. Unfortunately, you don’t learn new magic in a traditional manner, nor do you really obtain any abilities; instead must find magic flasks to hold elemental spells you absorb from around the world. It can easily work to your benefit if you combine specific elements with one another, and maybe mix in a piece of treasure to make more powerful, but magic in general feels far less emphasized compared to the various other mechanics. Summoning is also a strange entity; while they look absolutely breathtaking and are set pieces each time they’re used, their availability is confusingly random. If you’re in a dire situation, they will sometimes come to your aid, but it’s never known when they might appear. 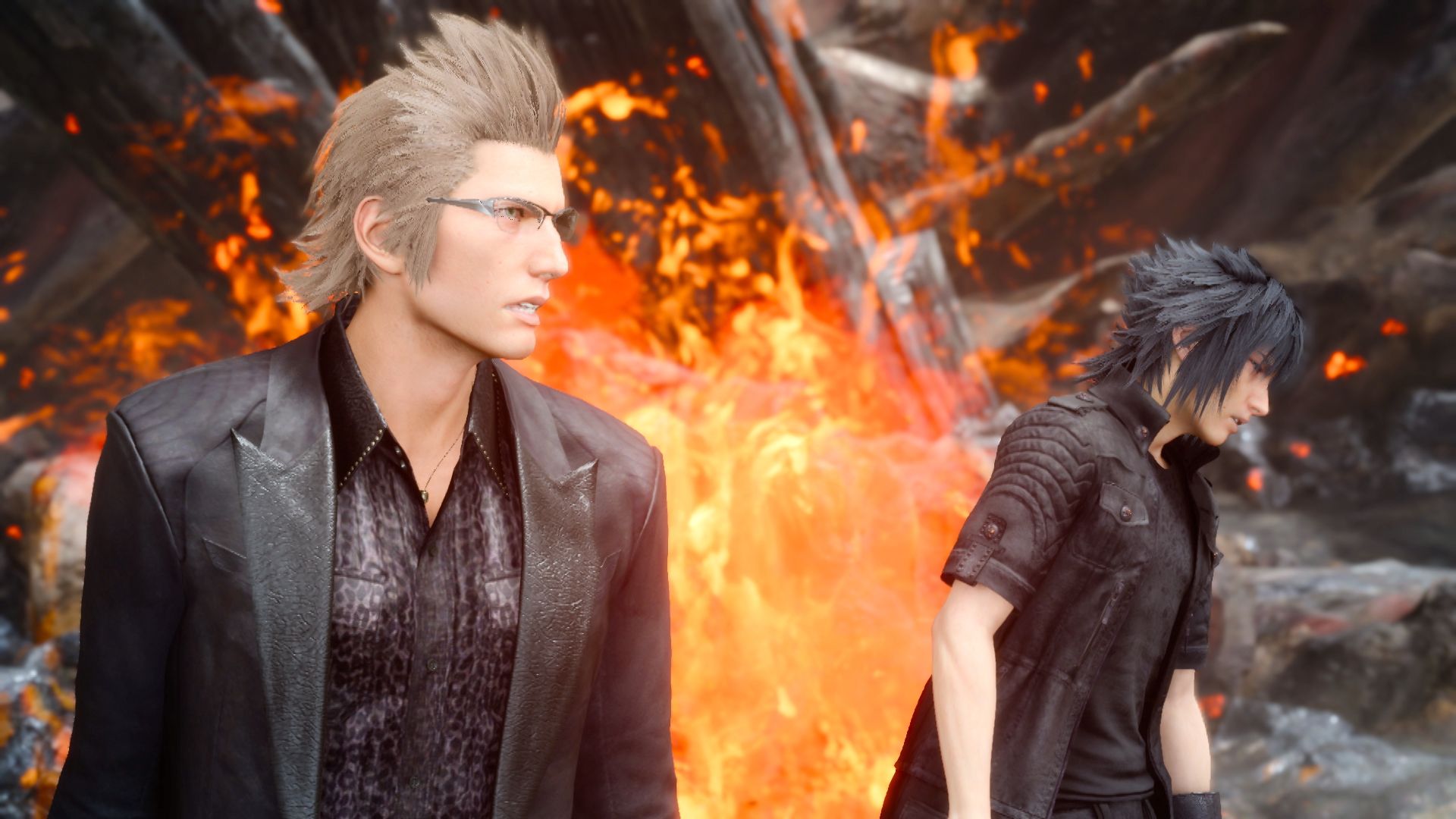 The biggest and best part of Final Fantasy XV is the well-crafted open world. Square Enix has meticulously build a large open world to drive through, despite the driving mechanics being less than ideal. It may start off a little stale as the desert isn’t exactly the most scenic of locations, especially when it comes to lighting effects, but as you progress through various enemy barricades, things slowly move in the game’s favor. The lush wilderness gives off a sense of beauty, even though it’s only a small patch of earth in the grand scheme of the world. The only criticism would be that, due to the lack of cities and only a handful of dungeons to explore, the world can sometimes feel empty in spots, but that’s an issue plenty of open world games suffer from. Due to Final Fantasy XV’s open nature from the early goings, there are various of side quests to partake in. Outside of the varied dungeons, which have some fantastic post-game content, most of the side quests aren’t all that inspiring. The vast majority end up being fetch quests or missions to slay a number of monsters. Fortunately, the hunting missions do add a level of challenge as you’re tasked with slaying dangerous foes. Overall, Square Enix has created a world ripe for exploration, even though the side quest structure could use some work.

Now this wouldn’t be a Final Fantasy game without some sort of spectacle, and XV doesn’t disappoint. From a visual perspective, as mentioned before, the game does start off a bit dry in the desert, but it quickly evolves into an exquisitely crafted open world RPG. Even looking at the set pieces spread out in the middle and later half of the game, there are moments that will absolutely take your breath away from the sheer scale and absurdity. For example, the Leviathan battle, while a bit confusing from a gameplay perspective at first, is a thing of beauty that’ll make you appreciate Square Enix’s art team. There can be a jittery frame rate due to frame pacing issues, and some of the textures in enclosed caverns can look a bit muddy at times, but most of the game is gorgeous, making you wish a city such as Altissia was more properly sown into the plot. All of this is supported by an extraordinary soundtrack that range from soft somber tones to heart-racing, quick tempo tracks. The music can also sometimes make rather dull fights be more enjoyable than they actually are. While you’ll definitely hear the same tracks over and over again through your travels in Final Fantasy XV, it’s no more than any other Japanese RPG. 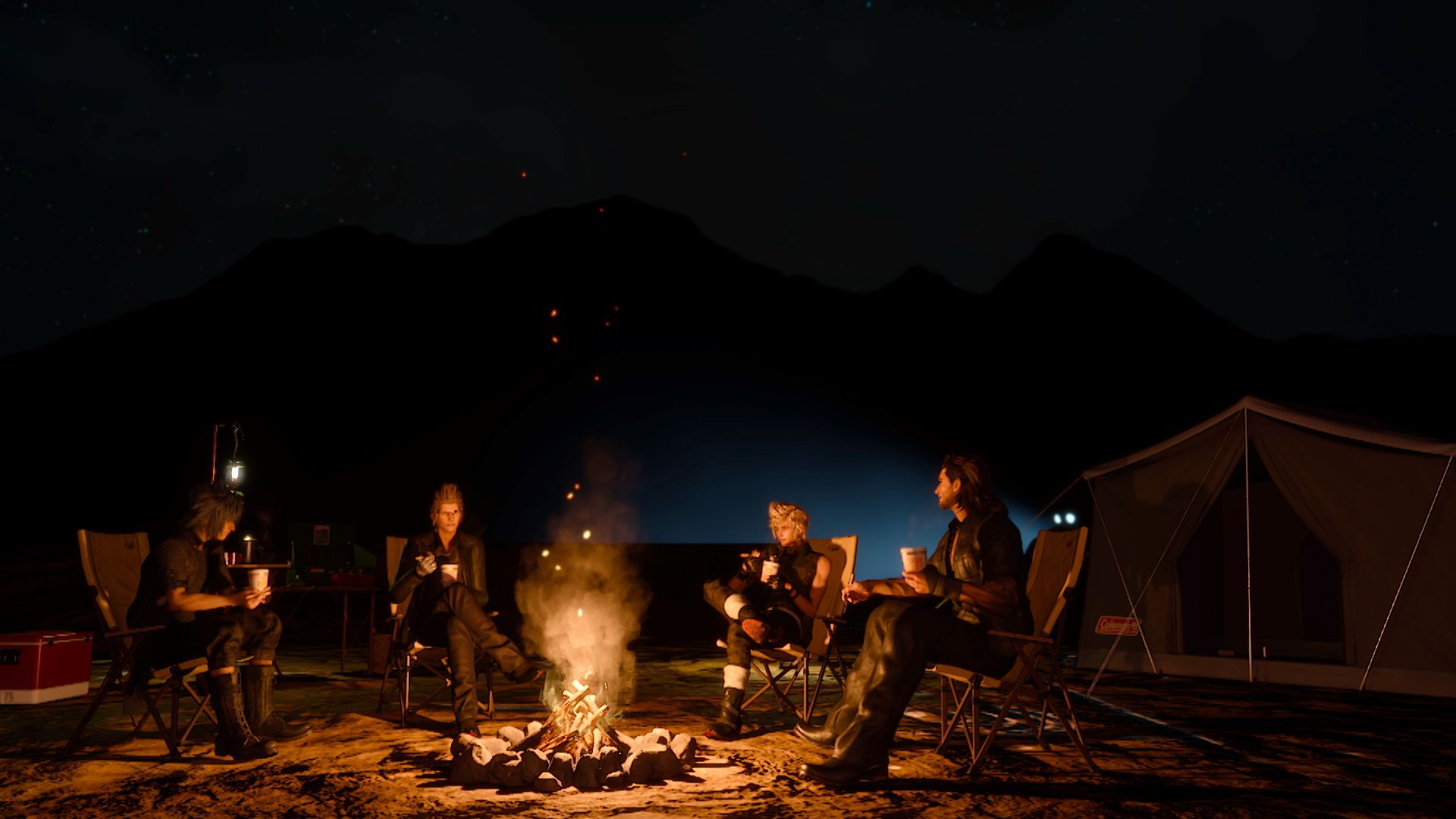 After ten long years of development, Final Fantasy XV ends up being more style than substance. It’s apparent that a lot of content wasn’t able to make the final cut as there are characters who are killed off or removed from the plot off-screen with little to no explanation, despite their important appearance and stature. The story is also poorly paced, with the core open world being utilized within the first eight chapters and the remaining seven ending up as a linear slog. It’s apparent that the story isn’t going to win any awards, but the final four chapters wind up ruining what would’ve been a decent adventure thanks to the poor plot devices. With that said, the gameplay helps make up for some of these wrongdoings. Easily the best part of Final Fantasy XV is the world Square Enix has created, as while the populated side quests lack inspiration, it ends up being an absolutely beautiful and vast playground to explore. The charming character chemistry among the four protagonists is also properly developed and the fluid combat mechanics aid the overall enjoyment. There are moments of brilliance spread across the campaign, but with it comes a frustratingly disheartening story.