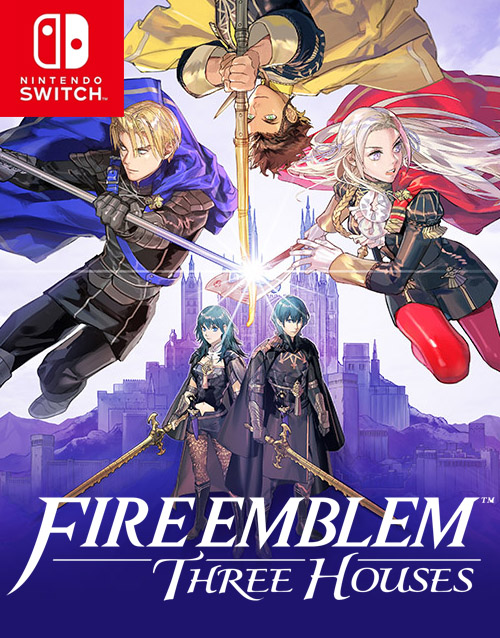 Fire Emblem has had quite the rocky history since its creation, which famously led to the series having one last hopeful hurrah on 3DS which exceeded expectations and allowed it to continue. After being revealed, Three Houses had a long period before we heard and saw more but finally more was unveiled and there were a lot more questions than answers. With a whole new setting and new approach, it seemed to be aiming for something different. Considering the ultimately mixed reception of both Fates and Shadows of Valentia, does Three Houses deliver on giving a truly enjoyable Fire Emblem experience?

The tale of Three Houses begins with a mercenary by the name of Byleth meeting a mysterious girl whom only they can see. They soon begin to realize they are connected to one another with the girl Sothis residing inside Byleth’s body. Upon waking up from what feels like a dream, Byleth is caught up in a sudden fight when three strangers show up asking for help. After a quick battle to save them the three introduce themselves as Claude, Dimitri and Edelgard. These three each play a major role in the political corners of Fodlan and are in school training to be the very best they can. After accompanying them back to their school and the church of Garreg Mach, Byleth is introduced to the archbishop Rhea who decides that they are suited to become a professor and teach the students. There are quite a few students, however, and Byleth can only choose one class to take care of. After exploring the area and meeting with students and their house representatives, Byleth selects one of the three houses and their journey truly begins.

Although each of the three paths will offer a different story experience, the core gameplay between the three is the same. Combat in Three Houeses is the usual fair for the series. In most battles up to ten units can be sent out at a time. They take turns moving across the grid battlefield to attack, heal or aid allies in a fight as enemies do the same. Previous Fire Emblem titles traditionally featured the weapon triangle, but Three Houses does away with it in favor of some unit types simply being weaker or stronger to certain weapons. The main weapons are sword, lance, axe, bow and magic with each one providing unique approaches to a fight. Typically the main goal in a battle is to defeat all the enemies or a main boss, collecting treasure along the way and trying to keep all the units alive. New to Three Houses is the battalions mechanic. Based on their authority ranking, units can hire battalions to help in the middle of a fight. Each one has their own mechanics such as stunning enemies in place or raining magic fireballs down from above. These are especially useful on enemies that appear later, although make for a great way to slow down and defeat oncoming attackers. While combat is typically the bread and butter of Fire Emblem, Three Houses sees a brand new gameplay change to mix things up: teaching. 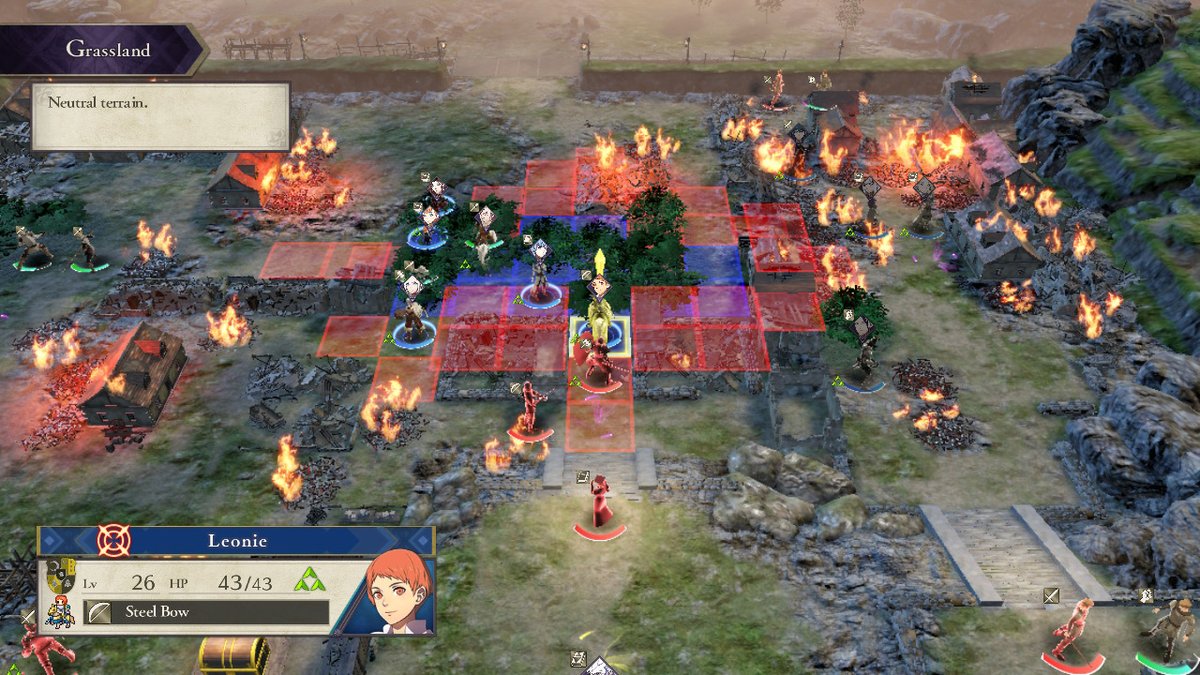 Outside of battles, it is Byleth’s job to teach and see to all of their students. Much like real school, time for teaching is split up into the twelve months of the year with each one having a required fight at the end of it. Byleth has days where they teach, and also days off to choose the activities they want to take part in. During the actual school segments, Byleth can select and handful of students to work with if they have enough motivation. Byleth specifically teaches combat skills, so students will increase their abilities with weapons, magic or other stats to help them as they grow. Eventually students gain the ability to upgrade to a new class which requires the teaching and battle experience in order to succeed. Each student has stats they are more proficient in which is usually what they aim for, and Byleth can select up to two they wish the student to focus on extra hard. At the end of the teaching week, students will gain experience for the two they’ve been studying and if lucky level them up while increasing their abilities.

On Byleth’s days off, there’s a variety of things they can choose to do. Typically the first free day of every month will require them to Explore. This allows Byleth to freely roam Garreg Mach to speak with other students, pick up quests and partake in side activities. Speaking with other students can help Byleth learn more about them and what’s currently going on in the story. On free days Byleth only has a certain amount of energy that can be used for special activities such as eating lunch with students or training with other teachers. There are also extra activities that require no energy such as fishing or gardening, in addition to exploring the local market for weapons and items. These free moments are also when Byleth can increase their support with students and get familiar story segments to learn more about each one. Students can also support one another through working together in battles or sharing a meal. If Byleth really wants to increase their bond, they can even invite house units to tea and have a caring conversation with them. Exploring is key to learning more about the world and what each character is up to, while also being the perfect time to recruit additional party members. 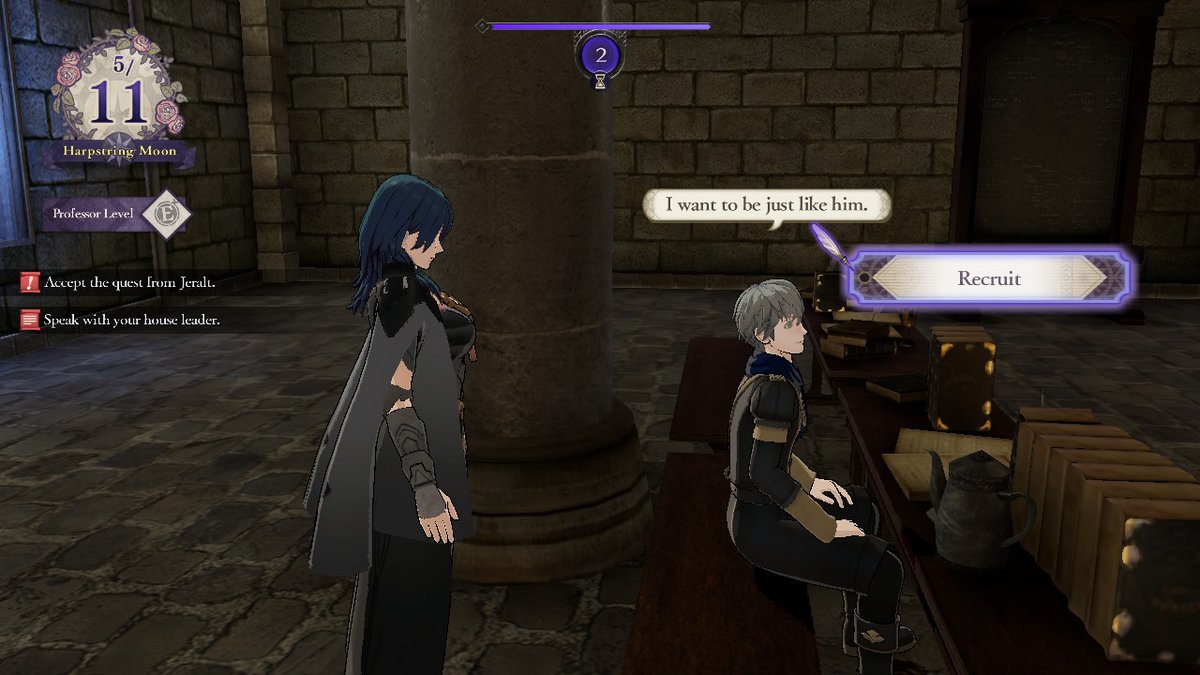 Although Byleth will only start out teaching the students of their chosen class, they can actually gain the favor of other house students throughout their time at Garreg Mach. Each student has their preferences in combat, and if Byleth happens to be proficient in those areas, other students may be more keen on joining their house to fight. The main way that students can be recruited is through improving Byleth’s stats in combat. Each one requires a numbered stat, such as charisma, and a lettered stat like Riding to meet a certain criteria if they want to be recruited. This can even be lowered if Byleth gets close to them in supports, and given a high enough support level the students may even decide to simply ask to join because they enjoy Byleth as a teacher. Recruiting is extremely important for people who want variety in their playable characters, and although not every single student will leave their house to join up, it is possible to recruit every other available character if Byleth works hard. Having such a variety of characters available adds leagues to the replayability if the temptation of multiple story paths wasn’t enough.

The soundtrack in Three Houses is simply fantastic. Every musical piece stands out and makes it easy to want to stop and listen to it for a while. The visuals for characters are a welcome upgrade from the 3DS titles, although the background at time can look a bit dull or off especially while in battle. In handheld there’s an obvious drop in visual quality, with character faces at times looking a bit pixelated. There’s also noticeable frame rate issues in battles while moving across the field of units and occasional odd dips while running around Garreg Mach. Fortunately these aren’t game breaking for a tactics title where it’s all about slow planning ahead, but it feels like it could have been a bit more smoothed out, especially for handheld. 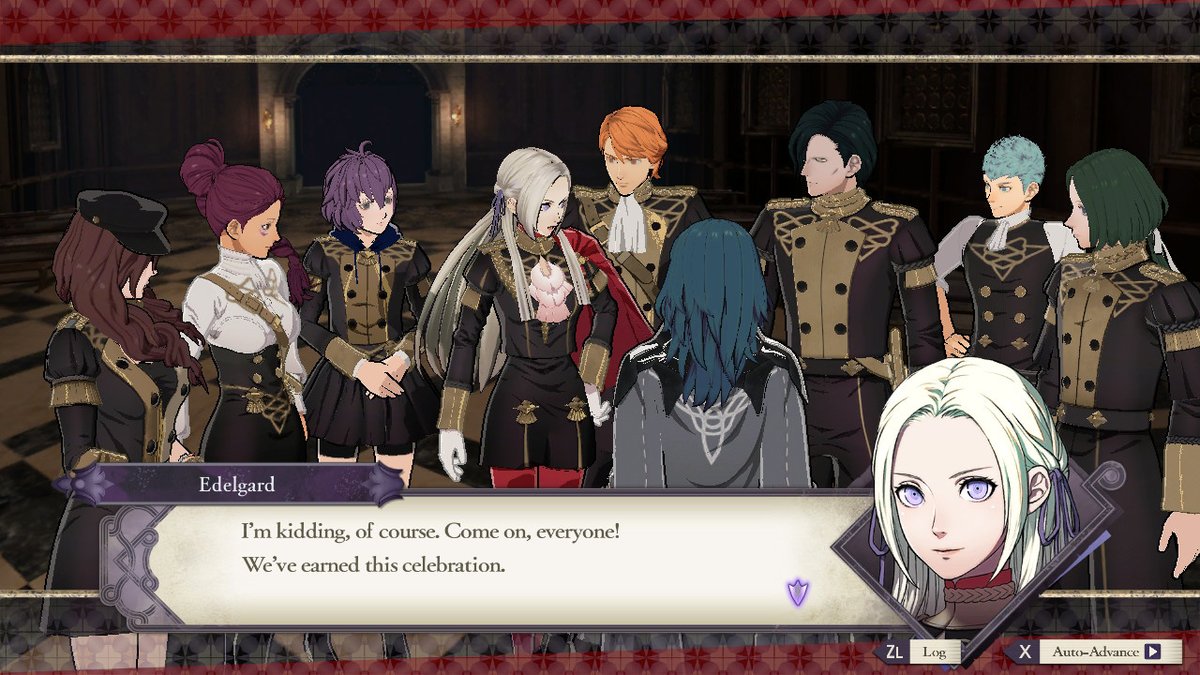 Three Houses offers one of the best stories in the Fire Emblem series since its revival on 3DS. The characters are all brilliantly written and none ever feel like their conversations fall flat. Every story element seems well thought out and the mysteries that get uncovered along the way are always surprising. Combat feels satisfying as ever with all the new mechanics and there’s a great amount of variety for players to try out or experiment with characters. It feels like a true return to form for the series where story and characters make the biggest impact in order to draw players in to a fantastical and terrifying world at war. Fire Emblem: Three Houses is an amazing title for new and old fans alike, with a gripping story and gameplay that can ease one in easy or start out rigorously hard for any type of player. There’s so much to be experienced in the world of Fodlan that anyone looking for a wonderful tactic RPG will be in for a fantastic time.