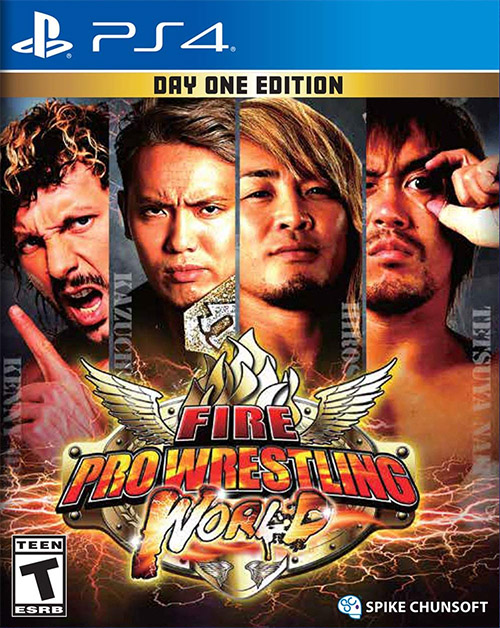 The Fire Pro Wrestling series has delivered some of gaming’s greatest in-ring action ever — and been a trailblazing series for both pro wrestling and MMA. Long before mixed martial arts was big enough across the world for the UFC to get its own games, the Fire Pro series featured an MMA cage and a roster of fighters heavily-inspired by the greatest acts of the day. The same held true for pro wrestling as a whole, with Japan’s major and minor leagues getting unofficial representation for years with one female licensed exception. Fire Pro Wrestling World is the first New Japan Pro Wrestling-licensed video game outside of a mobile app since Wrestle Kingdom 2 on the PS2 — and it’s a must-play game for any pro wrestling fan in general.

With the rise of NJPW over the past five years, Spike Chunsoft couldn’t have picked a stronger company to align Fire Pro Wrestling World with. New Japan has merchandise available in every Hot Topic store, a nationally broadcast TV show on AXS TV and now a starring role in the latest and greatest entry in the longest-running wrestling game series of all-time. The best thing about this is now fans who have seen all of these incredible matches week after week on NJPW World can now replicate some of them  in Fire Pro Wrestling World. The Fire Pro engine was essentially rebuilt from the ground up for this game, but manages to retain the same feel as prior entries in the series.

Fire Pro has always been about replicating the sports aspect of pro wrestling and much like what Aki’s games did for 3D was treat the games as a playable version of pro wrestling if it was real. It’s a difficult balancing act because whether you’re playing a game or watching a movie, there is a sense of unbelivability to what’s going on — but it’s up to the creators to get you invested in what’s happening and that’s very easy to do in Fire Pro World. The game offers up just about every major match type outside of a topped cell or anything involving ladders and allows for regular matches, K1-style striking wars, MMA fights, steel cage matches and a variety of exploding ring death matches. 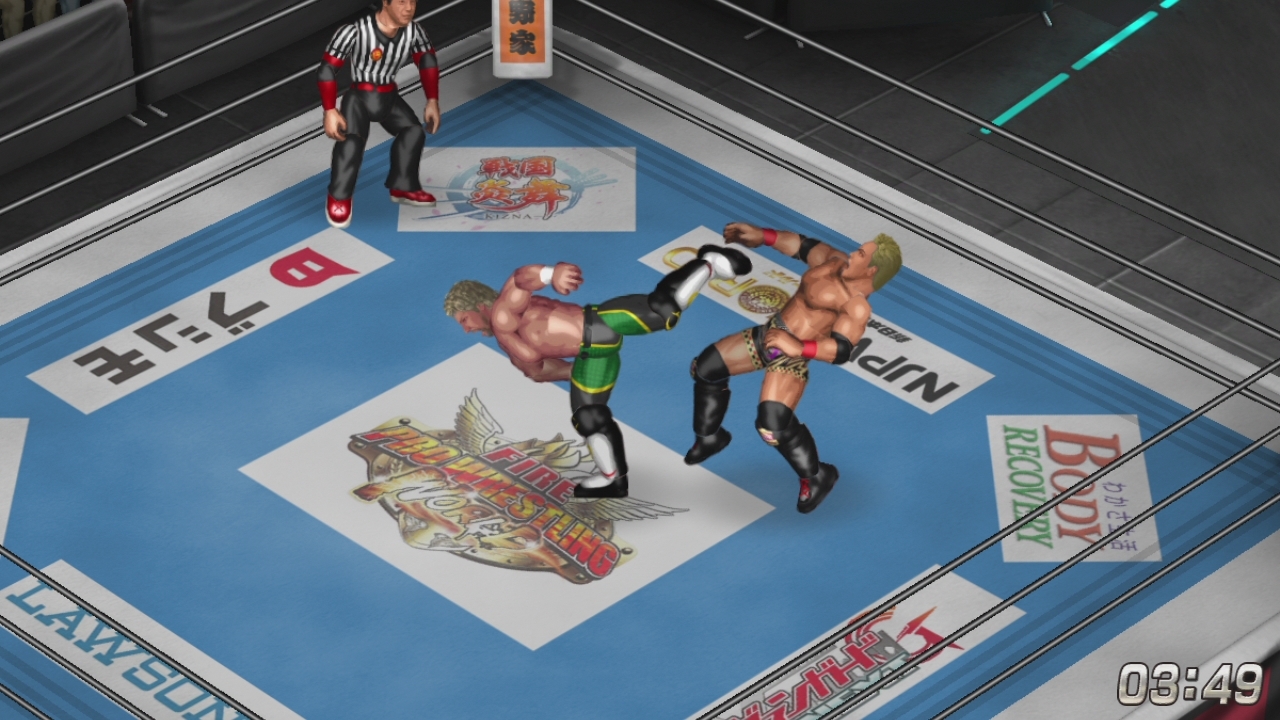 Each of these styles is completely different and yet works wonderfully thanks to Fire Pro’s timing-based gameplay mechanics. Everything relies on your timing being just right for a grapple — generally right after contact is made — and the person with the best timing gets the move started. Depending on how worn down a foe is and how big the move is, it might wind up being countered. Your moves generally have three different power levels to them — small, medium and big, with a finisher thrown in for good measure.

A small move will do less damage, but stand a far greater chance of landing early on and throughout the match. These are generally setup moves, like slams, forearms, and chops, but can put you in a greater position to do more damage to a limb. By doing enough of those, you can move up to more damaging medium moves before going for the big guns. There’s a constant risk/reward system in place for attempting big moves before you logically should though — as a single counter can result in you either being cradled or put in a submission depending on the style of your opponent. 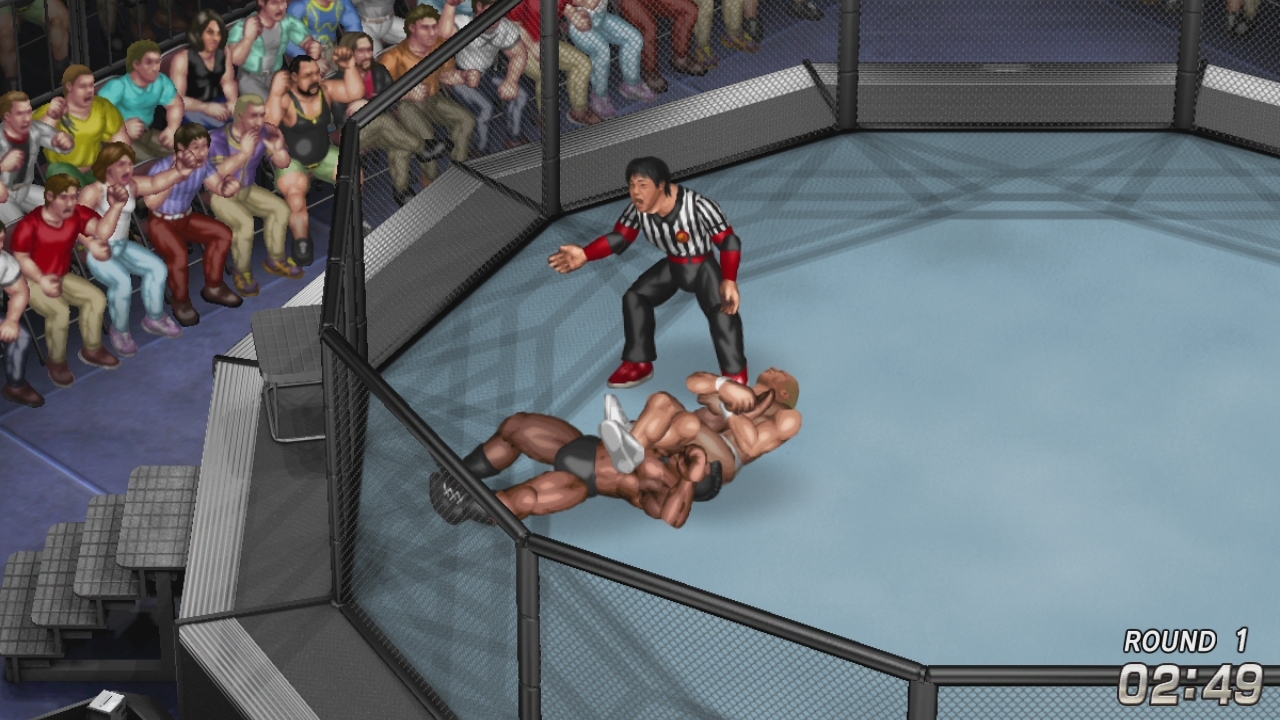 This means that in order to truly excel, you need to think about everything you do before you do it. Grappling is going to be timing-based, but strikes are a blend of timing and positioning. Unlike a WWE game where execution the button combination in the direction of a foe will usually do the trick, with Fire Pro, you have to have your timing and positioning dead-on to land a strike. Standing strikes can give you distance for a bigger attack — so using a kick to the gut as a way to land a giant elbow to the jaw right after can do damage or perhaps even win the match with a CRITICAL stoppage akin to a knockout or a ref stoppage for MMA. Striking battles are new to Fire Pro World and allow you to do things like the now-standard back and forth forearm exchanges before winning that and gaining momentum — or losing it and being vulnerable for a longer period of time. Finisher stealing is also new for World and better-replicates the American style of using an opponent’s pet move, although that is now something being done in New Japan — making this something that makes the game more current for the NJPW roster.

Fighting Road is new for the PS4 version and is DLC for the PC version alongside the NJPW content. It aims to replicate the role of a young lion in New Japan, where you get no-frills gear and a minimal moveset are out to prove your worth to your trainers. You start out working in the New Japan dojo and do practice matches before moving on to matches with set guidelines to them. These teach you the ropes in a more real-world way than just the in-game training mode, which is a must for newcomers and isn’t a bad idea for veterans just to keep your skills sharp. 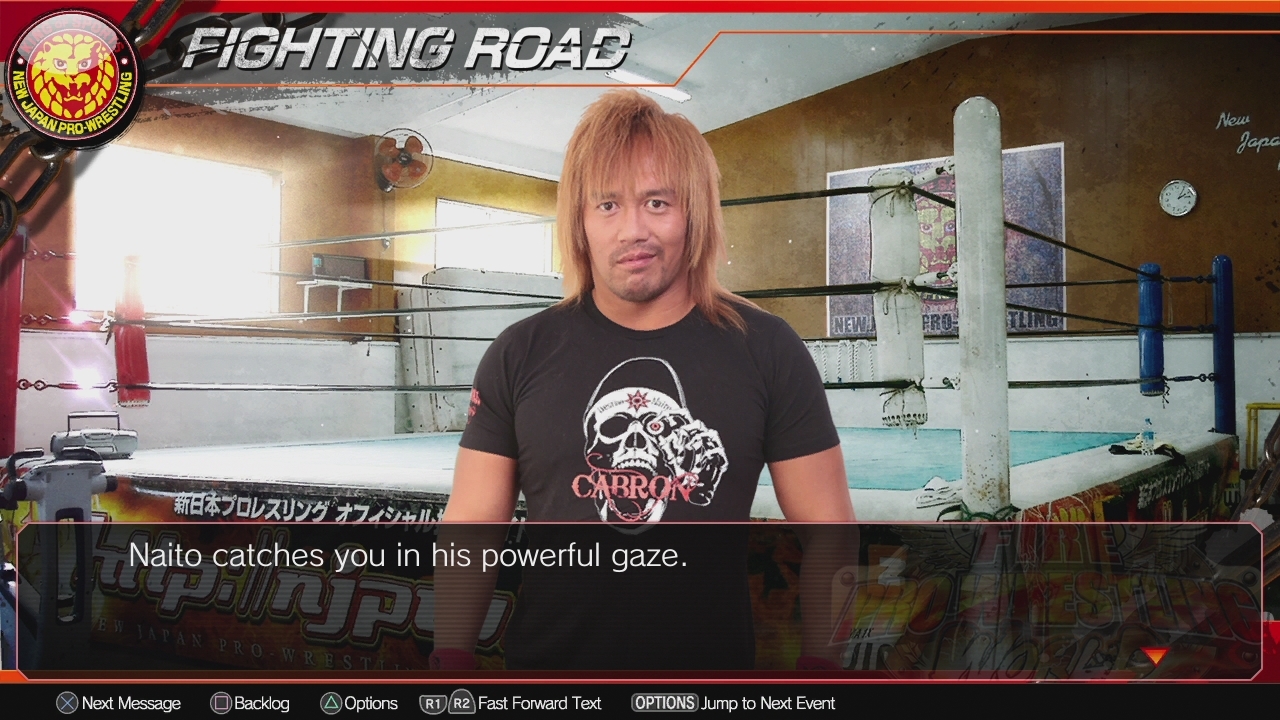 The mode is a fairly standard story of going from nothing to a big star, but it’s told with hilarious photo and text screens with New Japan’s roster. They aren’t funny in the sense of pure jokes, but have some odd phrasing in them that is perfectly in keeping with this being a Japanese product first and then being Americanized to some degree and that transition having some odd points to it. Things like nicknames that might work in Japan seem absolutely bizarre with English wording, but add to the comedy when you have Naito with as “Uncontrollable Charisma” right before he “catches you in his powerful gaze!” Beyond that, the mode is a fun way to pass the time and allows you to break up whatever your usual routine is with the game.

One thing that has defined Fire Pro over the decades has been its elaborate character creation suite, and long before things like that became standard, they were pioneered in Fire Pro. The franchise has flourished by giving you a lot of character heads, hair pieces, attire parts, moves and mannerisms from world-famous stars over the years and that has allowed character creations to excel. Fire Pro Returns was the last entry in the U.S. and one that I found myself spending countless hours tweaking for small moveset adjustments and attire changes. 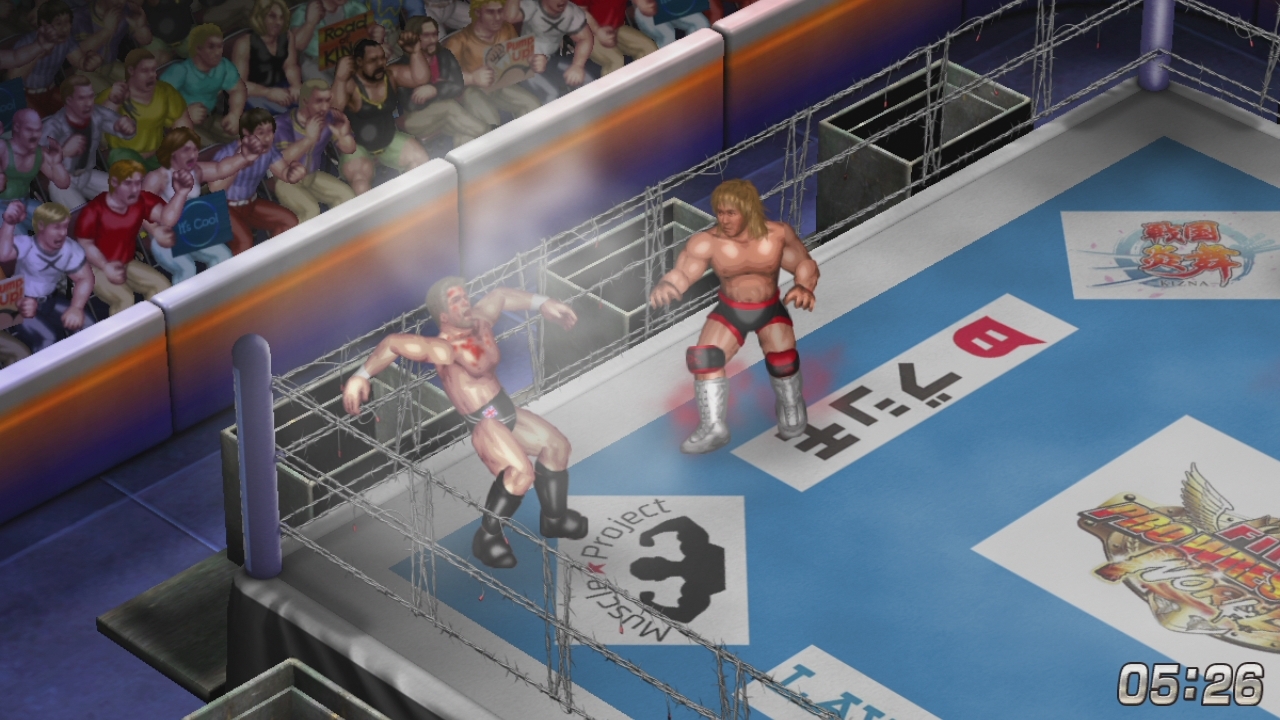 Beyond that, you can adjust CPU logic so someone wrestles differently than another person. It seems obvious, but few games truly replicate that and this series always has because you can change things like a taunt being done before a move or with a verbal saying and make the in-game replication that much more accurate to the real-life person. Whether it’s a pro wrestler or an MMA star, if they’ve been a big deal over the past thirty years, odds are you can make a reasonably good version of them with the tools provided.

Visually, Fire Pro World features the most-detailed character and environment art in the series. There are more parts visible on the roster’s attire and the ringside areas and entrance ramps have more detail than ever before. Pyro is featured and looks good, even if entrances as a whole are fairly no-frills and very few of the NJPW roster has their proper theme songs. The in-game music is fine, but remains a bit repetitious. Fortunately, it can be turned off and you can have music-free matches which allow the focus to shift to just telling the story in the ring with powerful blows to the body and jaw. When combining animations like grabbing an injured body part and bloodshed going on bodies and the ring itself, there are a lot of visual flourishes that impress. 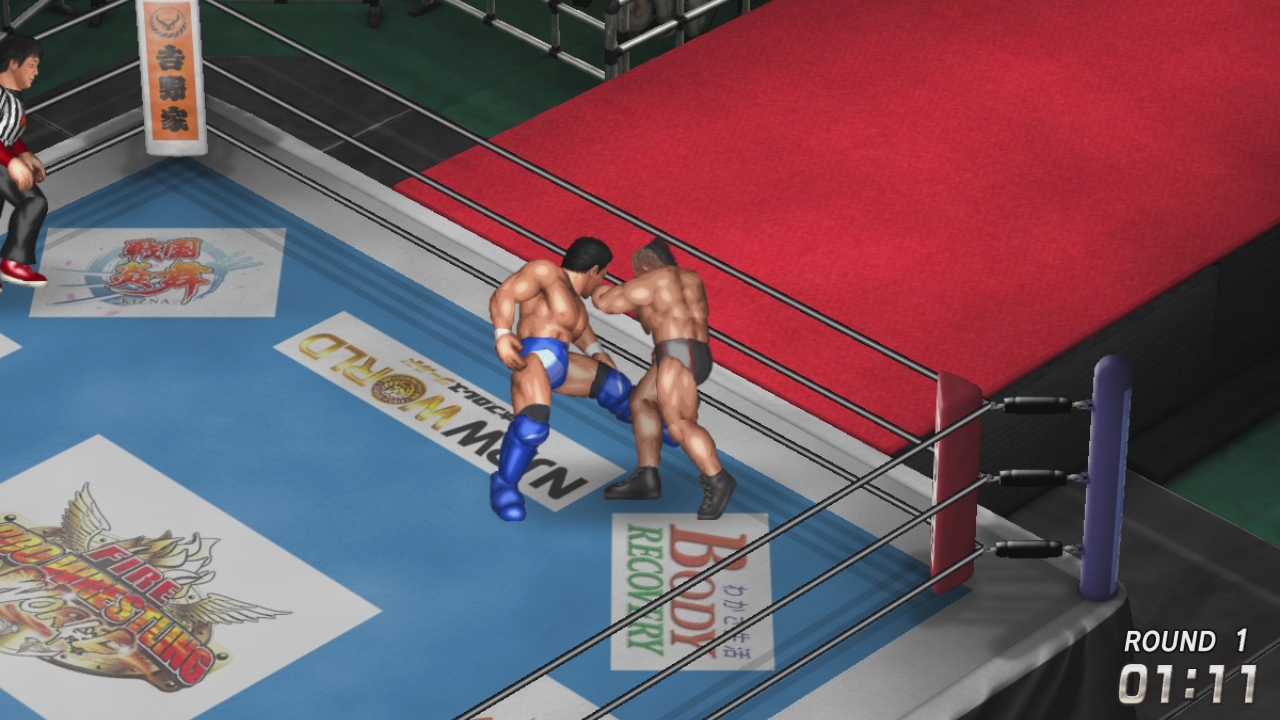 Fire Pro Wrestling World is the best entry in the longest-running wrestling game franchise. It combines the modern era of New Japan Pro Wrestling with a gameplay style that does not only that company, but many others justice with its diversity. The learning curve may be tough on newcomers in theory, but the training and Fighting Road modes ensure that you never feel too out of your depth even if you haven’t played a Fire Pro game before. Fire Pro Wrestling World is a must-buy for any fan of New Japan or pro wrestling as a whole.