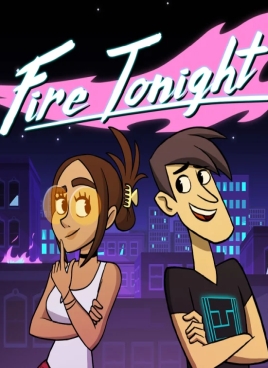 Fire Tonight features a unique premise, but one that endears the player to its characters and the world. Set in 1990, Devin and Maya are separated in their city by a strange fire. They have the will to see each other, but face many obstacles due to road closures and cops being out patrolling to keep people out of certain areas. Because of the setting, they can’t use cell phones or the internet to communicate and they don’t have pagers — so they’re left with using payphones to attempt to call one another, but the fire is messing up the signal. Reptoid Games aimed to capture the late ’80s/early ’90s vibe and did so well with things like tapes, records, CDs and actual stores selling those things littering the world alongside band billboards. It’s a glimpse into a bygone era and it feels like an effective time capsule of the time. Inspired by the name and lyrics of Information Society’s “Fire Tonight,” Fire Tonight the game is a fascinating experience from beginning to end.

Both Devin and Maya come off as fleshed out people and being able to shift between them in the narrative from level to level works well and gives the player glimpses into each character’s personality. Devin a lot more passive about the situation, while Maya is gung-ho and wants to not only get to the bottom of the fire, but get to Devin as soon as possible. Devin’s a tech guru who loves TV, movies and gaming and even has a brand-spanking new Mega CD to enjoy. One great little atmospheric touch is being able to move the camera around with either the bumpers or right stick and see more of the in-game world. So many point and click-style games don’t allow that, but because this meshes point and click gameplay with logic puzzles where the player controls the character manually, it works out wonderfully.

Maya being more the type A personality is the one the player controls the most, while the passive Devin is represented in a largely point and click style. Having the gameplay methods fit their personalities is awesome and makes Fire Tonight stand out from either other logic puzzle games or point and click games. In the case of the latter, you have a genre that does have some representation in the modern day with things like Deponia — but few that set things in a world that feels realistic and lived-in. Maya being more active leads to comedy, like her using an ability gained by using a walkman to pass through some of the blaze to move onto the next part of the level — and powering it up with weird, smelly batteries found in trash cans. The dev team did a fantastic job of poking fun at tropes by having others say they aren’t sure why folks keep throwing out perfectly good batteries, but you might as well use them. 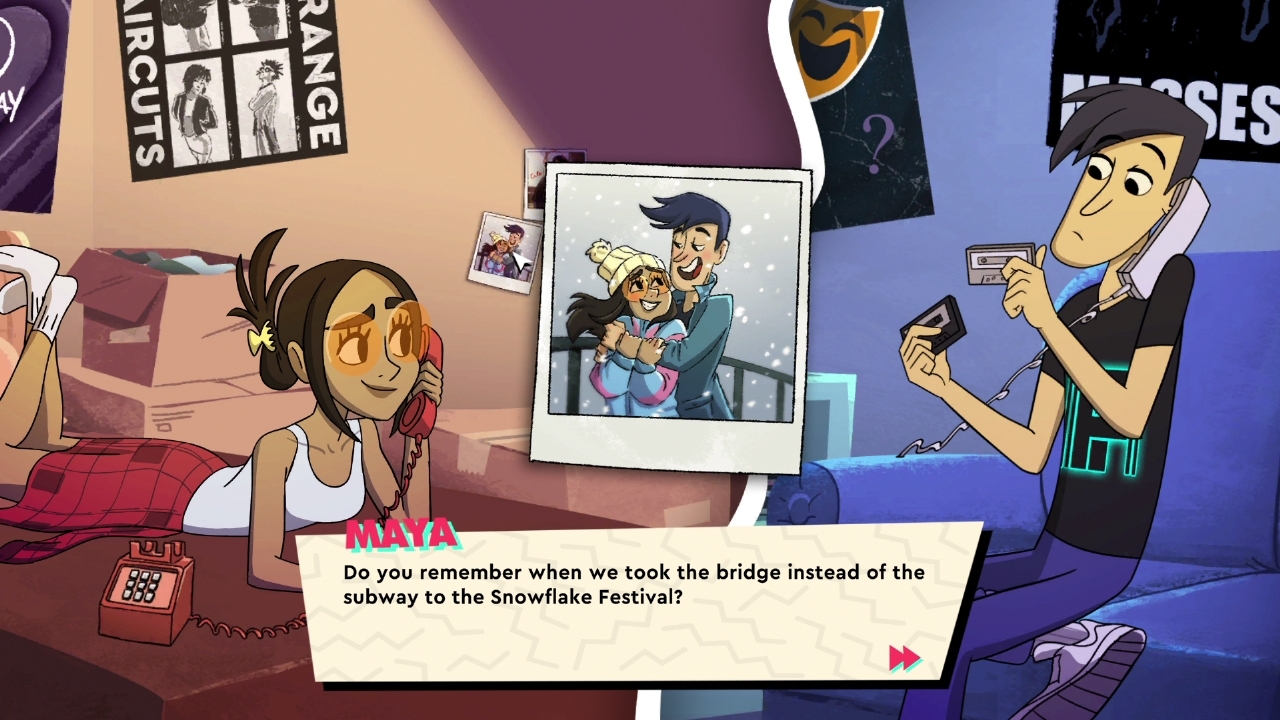 Now with Devin being passive, it’s easy to get an impression that he’s a bit of a jerk — but he isn’t. He had a brief conversation at the start with Maya where she told him to stay put before they got disconnected — so he’s going off of that. He’s conflicted throughout the adventure and exploring his apartment to find things to distract him. TV can’t help, movies and games can’t — but music does. Playing his favorite song of hers amps him up a bit and shows off how well the game makes tremendous use of a normal controller layout. What other game out there uses the left stick in place of a pencil to re-roll tape back into a cassette mixtape? It’s a tad odd to have a point and click-style game without touchscreen support, but it works fine here overall because the player has to use the right stick to move the camera and get a full view of the areas anyway.

Maya’s stages are logically laid-out with the puzzles mainly being environmental with light stealth thrown in at times too. It may seem daunting, but the cops she’s trying to evade only have their flashlights as a clear cone of what they can see at night. As someone who has issues with some stealth sections in games, they were a breeze to get past here and logic puzzles like using dumpsters to climb around areas showed that the compact areas were crafted with a lot of care put into them. It helps that since the areas are so small, the player can’t get lost — progress is gated and failure states only set you back a few minutes at most. Fire Tonight is an efficient experience and one that doesn’t waste the player’s time — instead choosing to envelope them in the world and make it a fun journey from beginning to end.

The variety offered up is impressive. Beyond logic puzzles and point and click adventure elements, there are latter-game roller-blades that help show how determined Maya is. The game-closing sequence is hilarious too, as the couple finds themselves conflicted in a tough moment — but have to come together as a team in order to move forward. Fire Tonight takes players on an emotional roller coaster at times and exceeds expectations at adding drama to a game that is so inherently comedy-focused. 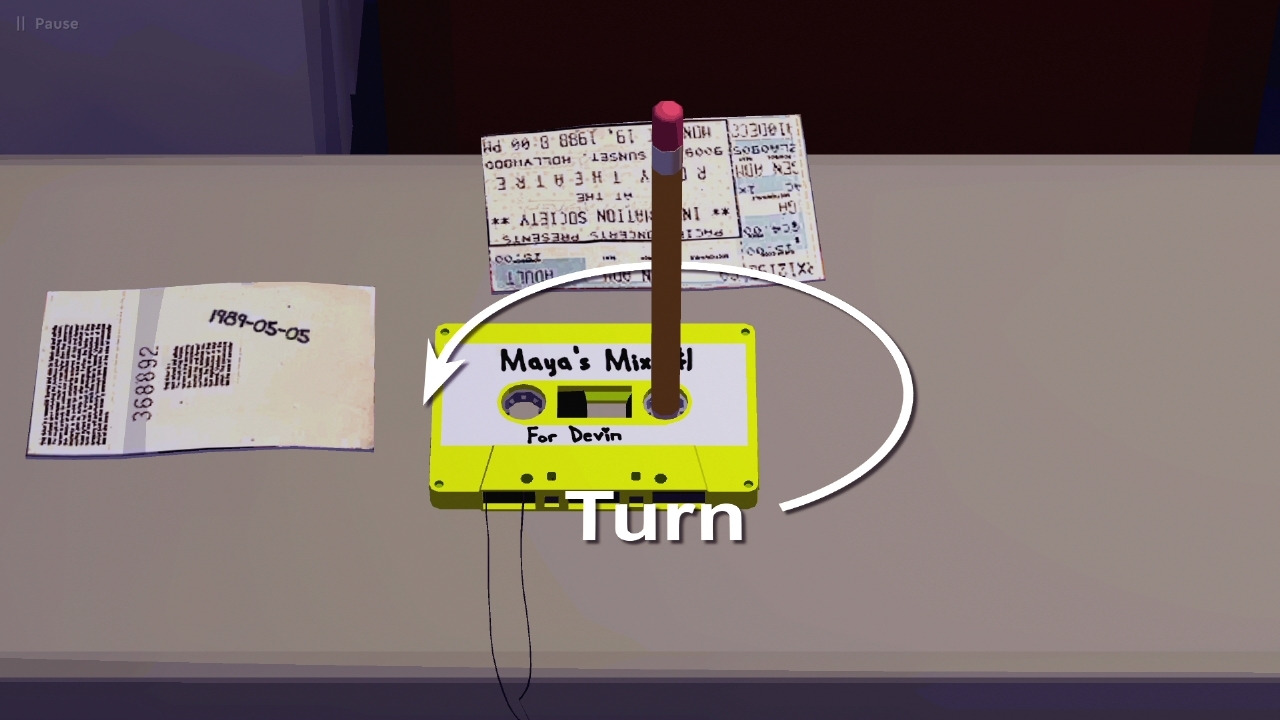 The clean cartoony art style works well for both the cinematics and the in-game action. Every part of the world fits the style — so even though real-world things like TVs and gaming consoles are drawn in a way that look great in the game. Animation is also smooth, although there are rough edges when it comes to moving around that look jittery. The small flaws can be smoothed over with patching and never get in the way of becoming engrossed in what’s going on. It’s a gorgeous experience overall and one that makes good use of a minimalist design.

Fire Tonight‘s soundtrack is diverse and ranges from easy-going pop to more intense synth music. The default soundtrack fits the scenes nicely and is enjoyable to listen to just to chill for the day and have the songs playing in the background. Hopefully, the PC version gets a variant with the soundtrack available as well. Being able to control the OST at points with Devin’s cassette deck is a cool feature and is the closest thing we’ve really seen to in-game custom soundtracks that are mixed properly with in-game audio since the original Xbox’s custom soundtrack feature. There’s no voice acting, which helps here because it allows the player to create their own voices for the cast. It’s easy to imagine Devin as a laid back stoner-type, while Maya worked for me with a Kim Possible-style voice where she’s just determined to get things done no matter what. 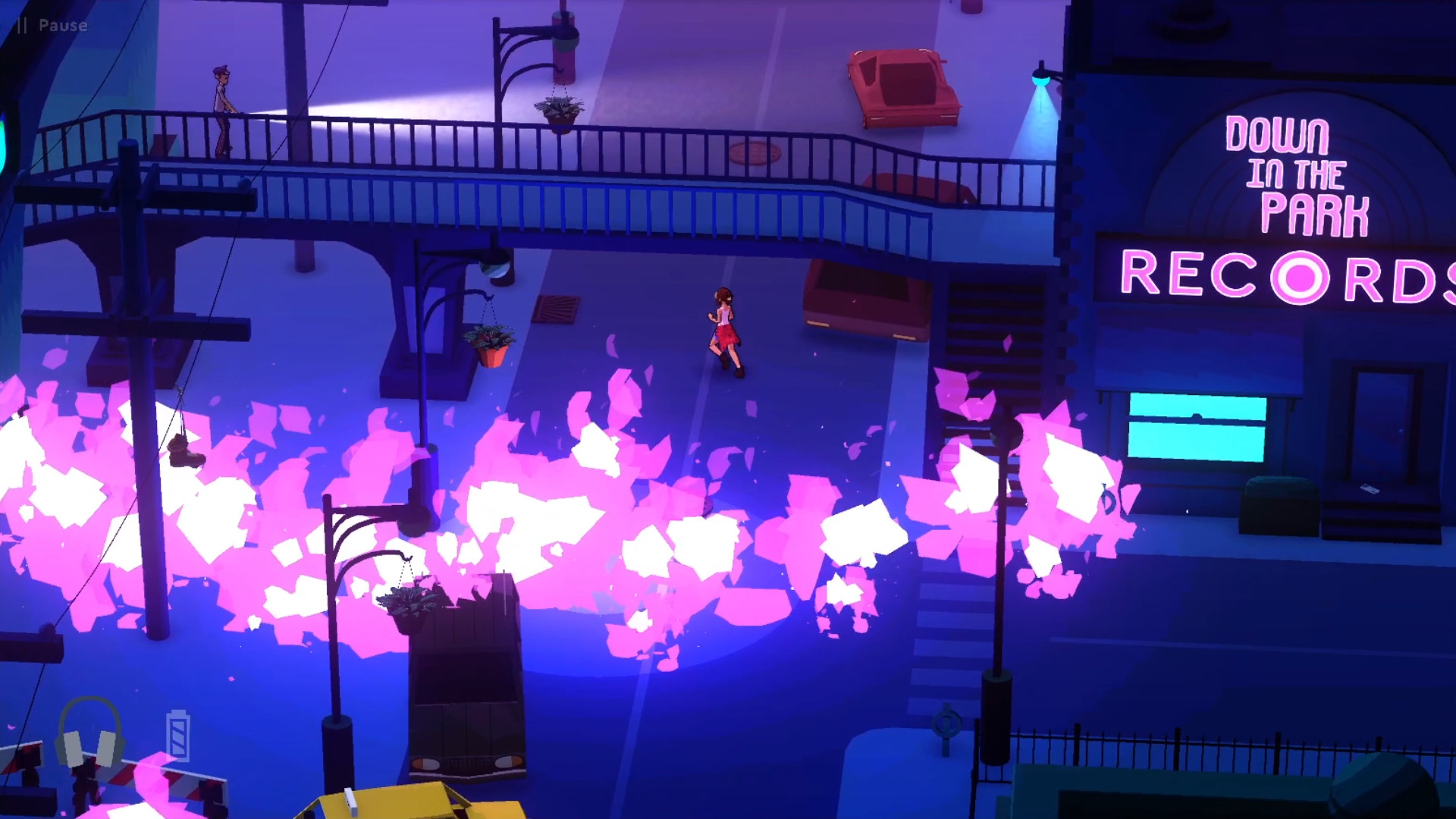 Fire Tonight is short, sweet and unforgettable. Both main characters and their varying gameplay styles enable the player to go on a journey that sticks with you long after the game ends. Blending logic puzzles with a point and click adventure seems odd in theory, but in execution works out well. Each style of gameplay is fun and aside from some technical hiccups that can spring up from time to time, it’s a smooth experience. Its visuals and music work together to form something beautiful and it acts as a nice time capsule for the early ’90s while also highlighting how fortunate we are to have technology we do. Fire Tonight is a fantastic pickup for anyone in the mood for a light, breezy logic puzzle game — but also anyone who just wants to enjoy an uplifting narrative.