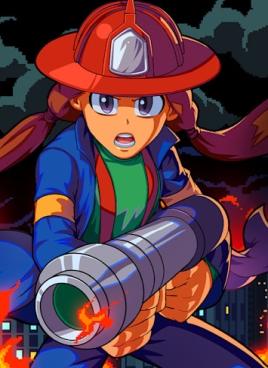 We don’t see a lot of firefighting games on the market despite the industry having a rich history of them. The Firemen was a reasonable success for Human on the Super Famicom in the mid-’90s, while Jaleco’s The Ignition Factor remains a personal gold standard for the genre and has been re-released enough to be appreciated more fully. Its Nintendo Switch Online service release was easily the biggest audience it’s had in decades, while latter-day games like Konami’s Firefighter FD 18 went away from a cartoony atmosphere and went more reality-based. 2021’s Firegirl Hack ‘n Splash Rescue was a good game, but one that needed more polish.

The original release was a rogue-lite firefighter action/platformer and a tough one, but it was too unforgiving at the start. It was easy to die early on in the first area and while it’s a procedurally-generated experience with different outcomes being possible, death was a near-certainty if you didn’t gel with the game right away. There was an upgrade tree in place, but it was clunky to use and the quick deaths made it tougher to gain access to it to begin with. Most firefighting games have used either an overhead perspective or a 3D view, but Firegirl uses a 2D side-scrolling plane with high-res pixel art in a 3D world, resulting in a highly-detailed set of characters and environments.

The core gameplay revolves around slicing down doors and barriers to get through the stage and unlock things like more time or water refills. As with a lot of firefighting games, there’s an element of reality thrown in with having limited water supplies to work with to put out fires. This results in a risk/reward scenario where the player can try to take out flames while balancing rescues. Taking care of all the flames is more fulfilling as the player because in-universe, you’re supposed to try and do the best possible job. Taking more time to get rid of every flame, however, can result in not being able to find a survivor in time. The time and water limit is an ever-present reminder that efficiency is the key to success overall. 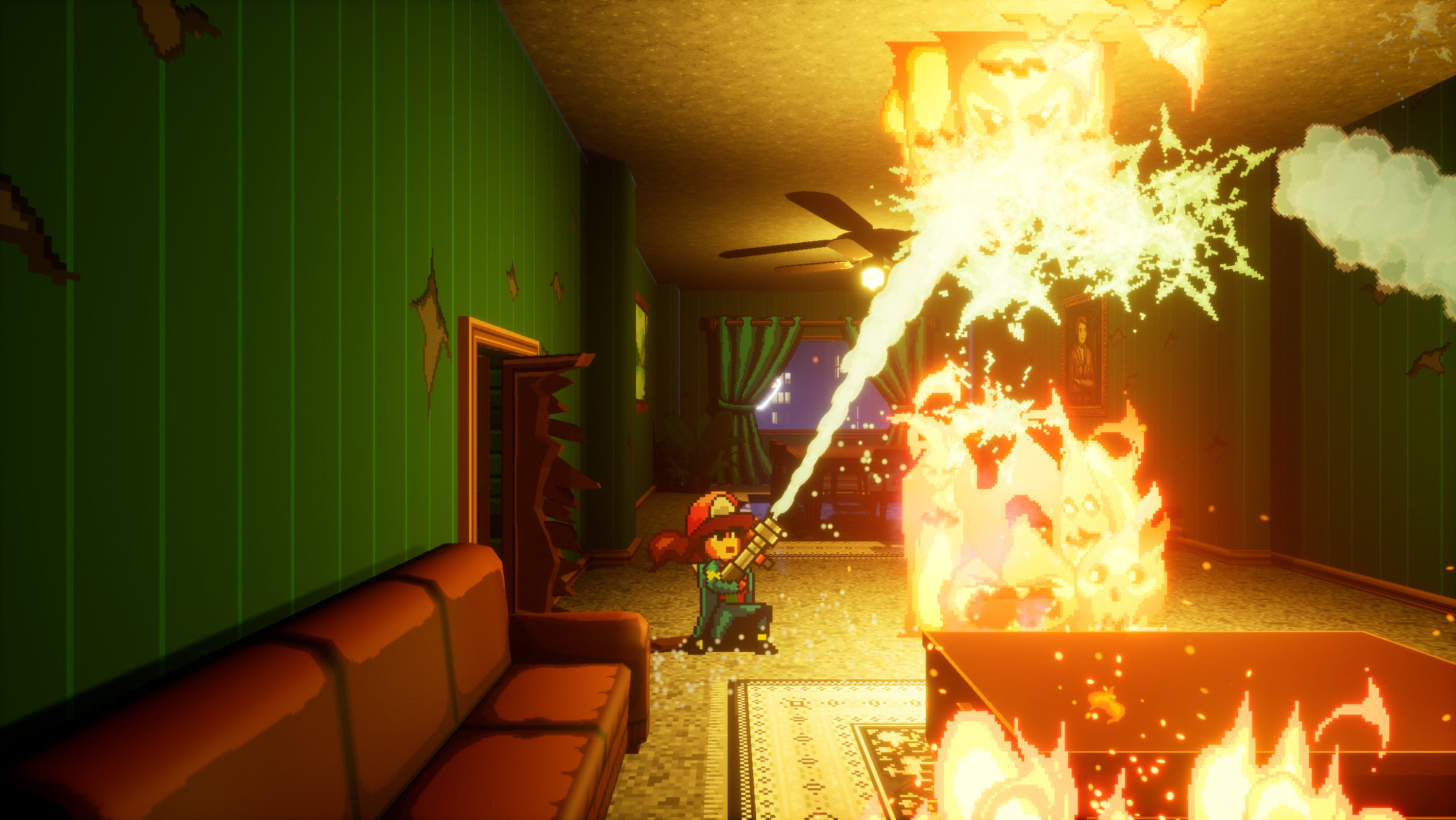 Firegirl feels like a slower-paced platformer and winds up being a nice gateway game into rogue-lite games as a result. She moves up, down, left and right with vertical movement being controlled by her hose a bit like FLUDD in Super Mario Sunshine. Using the hose to move about opens up new pathways and allows for items to be found, while survivors will always be given a verbal cue when nearby. Her normal jump can get around many obstacles, but going room to room with debris in the way results in needing to make sure to keep an ample supply of water ready just in case you get fire monsters throughout the room.

The usage of fire monsters instead of purely natural flames is odd in a way, but even more simulation-based games like FD18 used it as a way to explain so many fires being around one location. Here, there is lore built up of the fires springing about after a tome is found and that adds a nice bit of flair to things. One can easily imagine this being a nice conceit for an OVA about the franchise one day as there’s more to it with the Chief and Firegirl’s late father that winds up being cool. The folks that get saved range from pets to people and the people can help upgrade the firehouse.

The original version’s upgrade path was slow-going for a lot of the trek, but the DX version rebalances funds to better-allow a player’s time to be used to at least get some cash to show for a stage failure no matter how quick. You can die a minute in and still feel like something got accomplished and that helps it feel worthwhile to keep soldiering onward. The DX incarnation is still a tough game, but one that balances things more in the player’s favor without making things too easy. 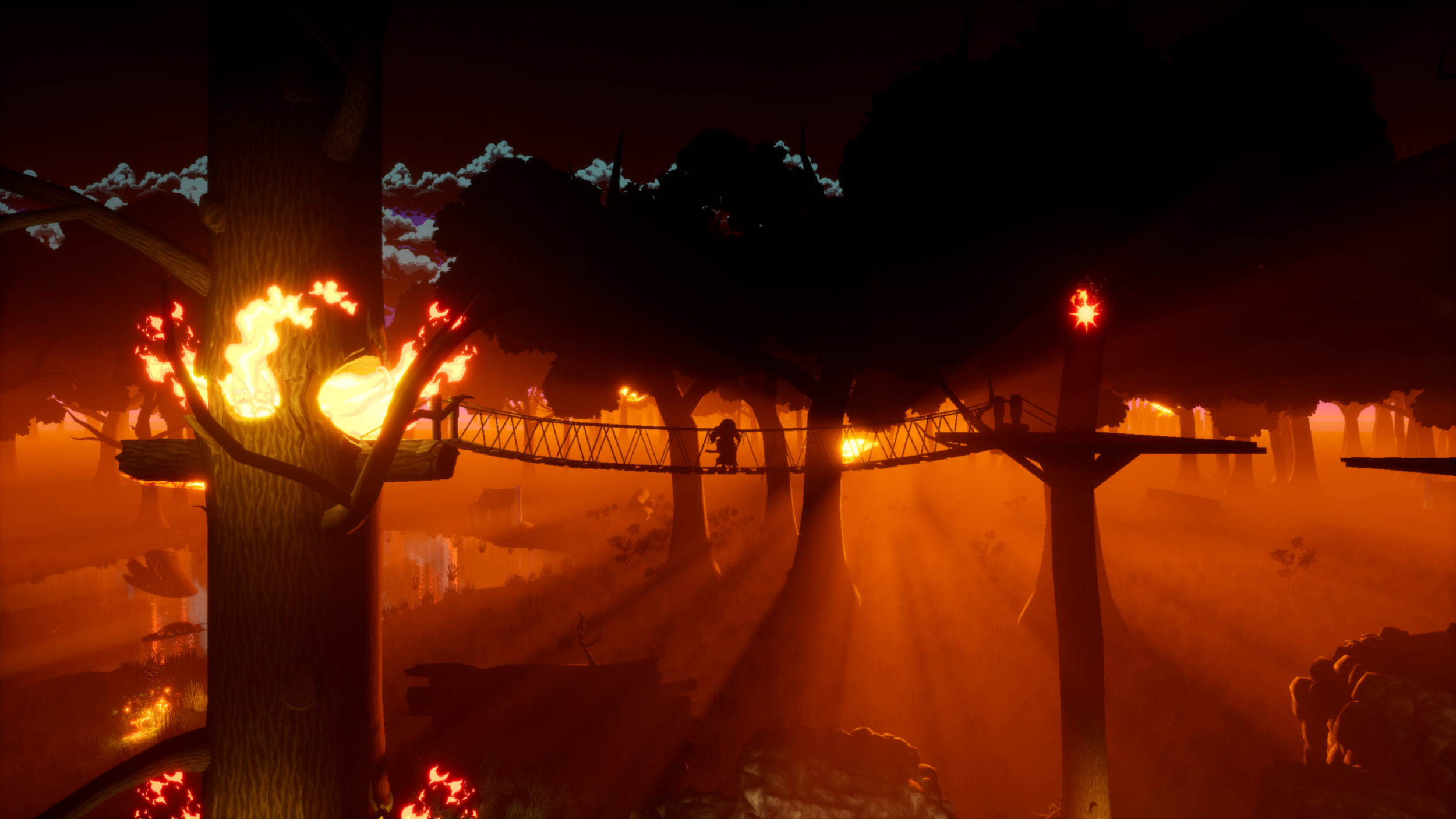 It strikes a nice balance between being really forgiving and being “the Souls-like of firefighting games.” Players do need to be mindful of things like the timing and animation for an axe swing being longer than swinging a sword in a platformer. Some of the challenge is going to come from how familiar the player is to other firefighting games. The genre as a whole is meant to be somewhat unforgiving to start to show how unforgiving fire itself can be. Firegirl Hack ‘n Splash is a challenging adventure, but one that can be conquered with a lot of patience.

The biggest key to success is to take one’s time with every obstacle and avoid rushing because rushing in leads to taking damage and then death. There’s a balance between it and generally taking out the larger of two fire monsters is just fine and will allow Firegirl to pass through the area without an attack. Similarly, mastering the platforming mechanics with the hose early on in the tutorial area can make a world of difference for the main game itself. The core formula doesn’t change much, but the environments do. Firegirl’s controls are spot-on and one can play it almost like a run and gun shooter with the hose as you can use the left stick to move both the character and the hose at one time. It feels natural, but if you want, the right-stick can be used to move the hose too. Players can move with the d-pad, but due to the movement of the character and hose being tied together, it’s usually best to use the left stick for everything. 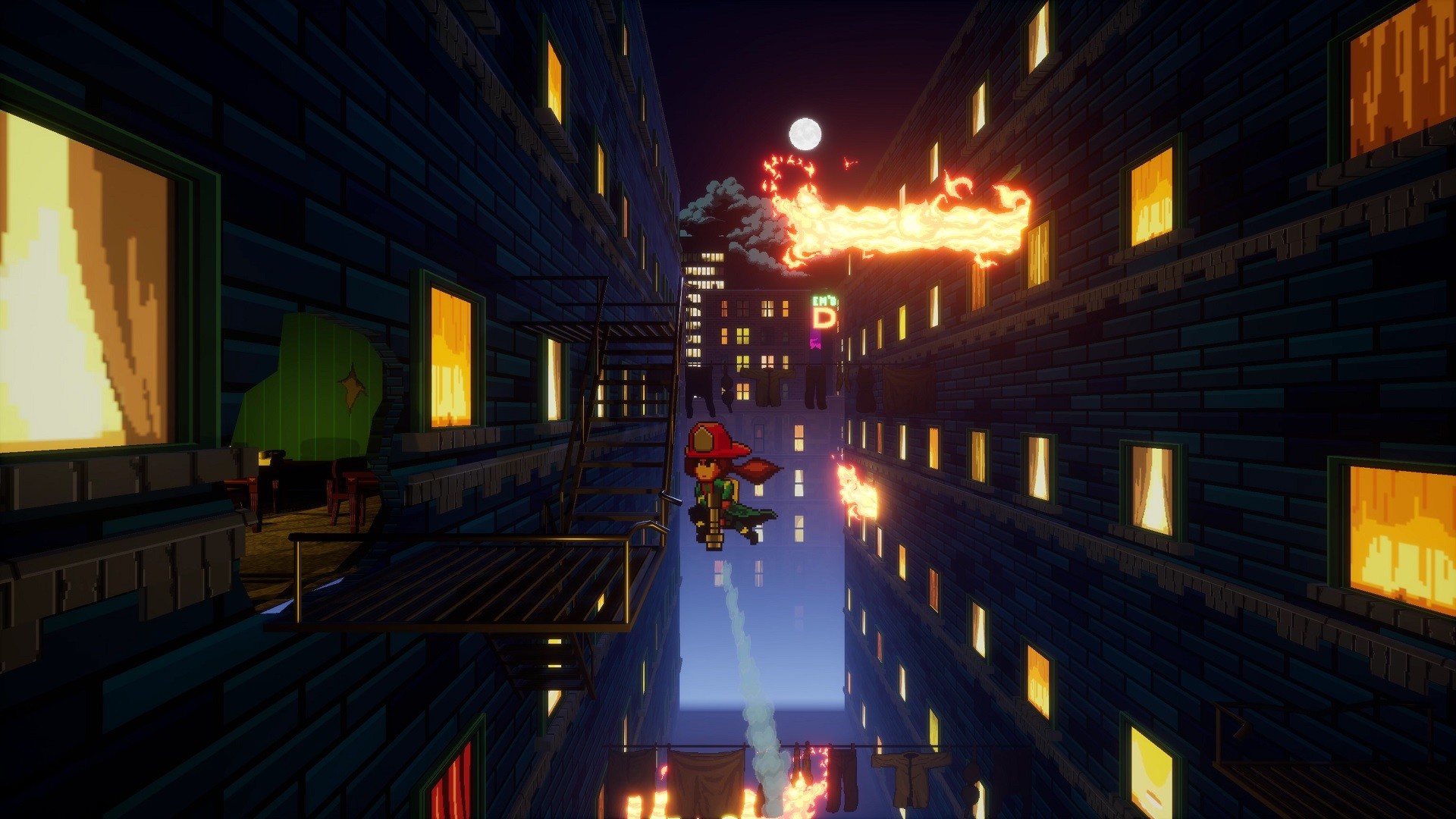 Regular buildings and cool areas like trains will be used to test your mettle and they all look impressive. The fires themselves have a lot of detail and the environments are gorgeous, whether it’s the firehouse itself and its realistic lighting for things like wood or the night sky leading to a silhouette effect for the flames. It’s clear that a lot of care went into the art style and it helps Firegirl stand out when compared to pretty much every other game on the market except for things using the HD2D graphics, which are the most similar to these. The exaggerated designs of much of the cast help give the game a light-hearted tone overall given that the subject matter is inherently bleak.

Firegirl’s sound design is solid overall, with room for improvement depending on one’s viewpoint on voice acting. The crackle of the flames and impact of the axe are fantastic, but the hose does sound weak. The soundtrack is good and offers up a cartoony, but dramatic blend of music that varies from being fun in the firehouse to more intense on the field. There’s no voice acting of any kind beyond clues for saving folks and that’s going to either be fine or an annoyance for some. If you don’t mind a quiet cast and like creating your own voices for them, then you’ll be in for a treat, but those who love voice work will be disappointed. 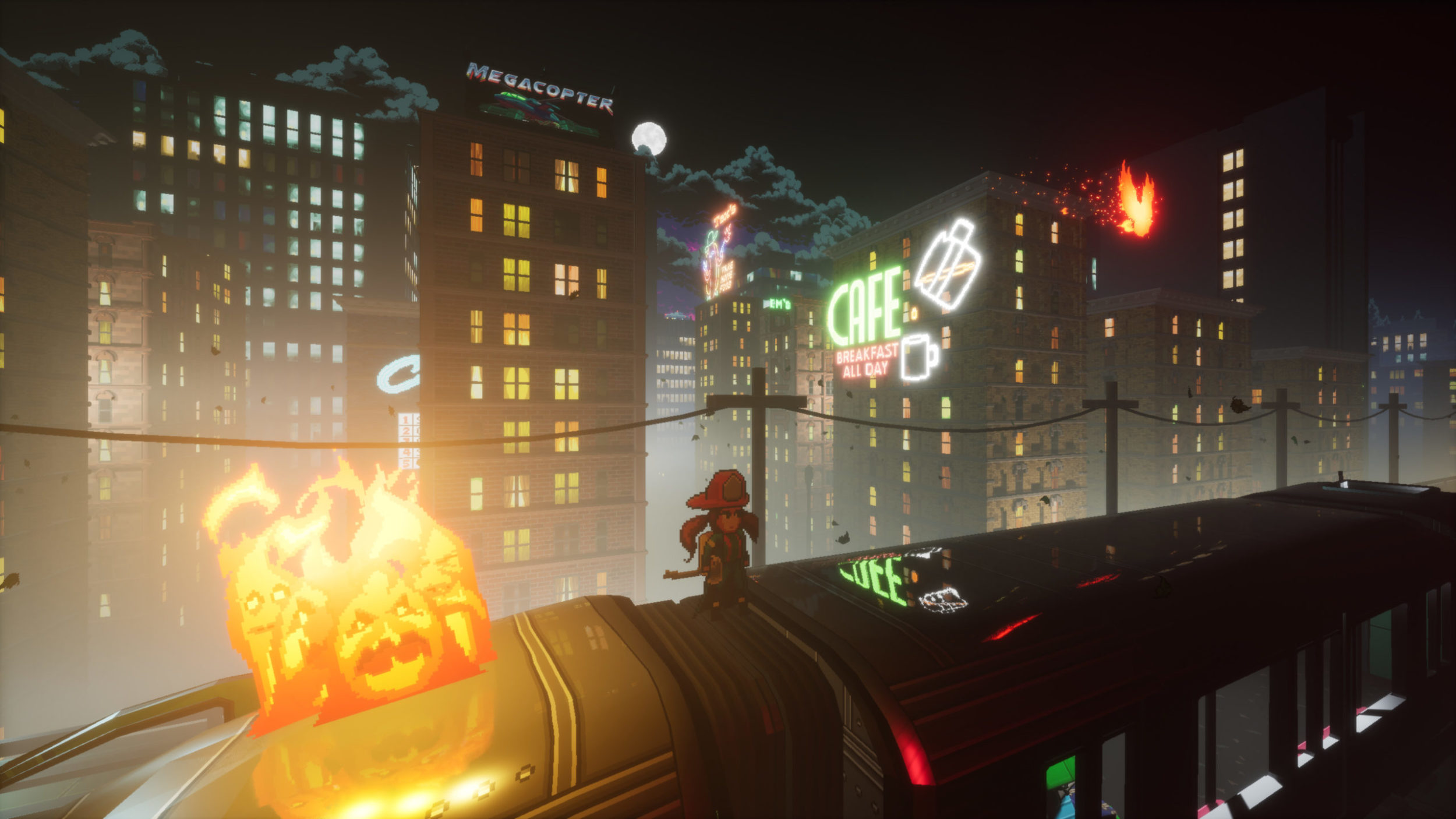 Those seeking a slower-paced action-platformer with a mix of real-time resource management thrown in will adore Firegirl Hack ‘n Splash Rescue DX. It’s a tough, but fair game and one that feels a lot more fair than the original release thanks to tweaks with the balance and an in-game rewards system. If you’re in the mood for a fun, challenging adventure and have an affinity for side-scrolling action, Firegirl Hack ‘n Splash Rescue DX is a must-buy.