Puzzle and board games have existed for centuries. They have cured boredom, been used in competitive environment and are generally just a hobby to many. Then, in more recent years, video games came into play. All of these serve the same exact purpose. Then something like Flip Wars comes along and combines everything into one. There have been similar titles in the past, but let’s see what is worth checking out about this brand new game.

Flip Wars comes from developer Over Fence who have a few titles under their belt. They have even partnered with Sanrio on a Hello Kitty project and a little something with CoroCoro, both of which are nothing to sneeze at. Now they team with Nintendo to bring some multiplayer enjoyment. Flip Wars takes place between 2 to 4 players on different game boards. The goal is to flip as many tiles as possible as doing so will reveal it in your color and the player with the most tiles in their color at the end of the match is declared winner. It’s a simple concept to understand, but a challenge pulling off.

Actually, there is more to just getting your color on the board. In order to do so you must perform a slam and a couple of tiles will become yours. There are items to collect such as increased speed or large area which will help in getting the most, plus they can stack up, so it is advisable to grab them if possible. But you can also knock an opponent off the board if they happen to be standing in your pathway. This causes them to lose their power-ups and gives you time to takeover. Because of this feature there is also a mode where you compete to see who can knock the others out the most. Take that even further with a variation of it by being the first to knock them out three times in Life Mode. So, the amount of different ways to play is pretty good. Only two buttons are necessary for the entire game. Press A to jump and it automatically pounds where you stand. If you are moving around when jumping it will hover you to the next space and pound. If you hit B while in mid-jump it will cancel and you just land back without flipping tiles. Fake out the opponent by canceling a jump, standing still a bit or going for all the items and over powering them. Implementing a strategy could take some time as action can be a bit unpredictable. You will want to keep moving around instinctively but sometimes hanging back or observing could be best to throw off the opponent’s timing. 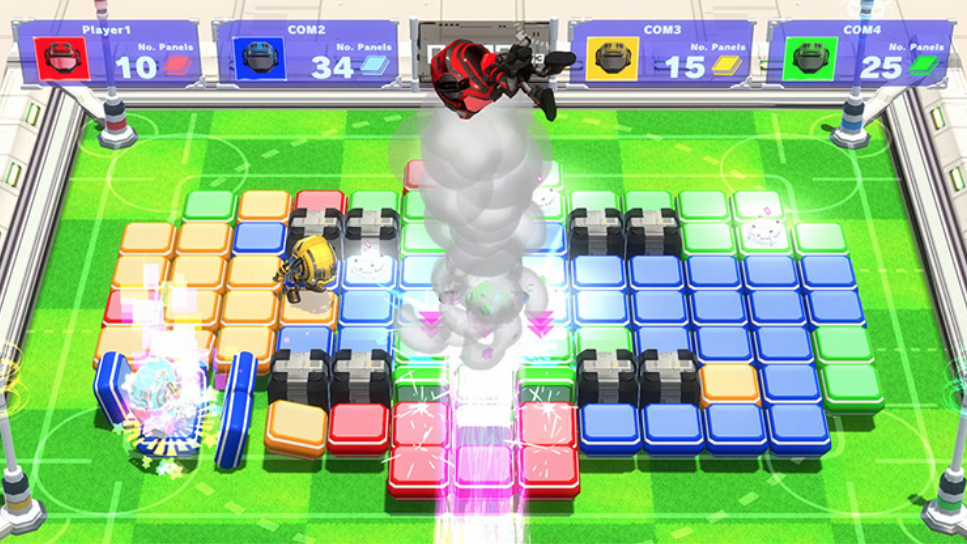 Single and multiplayer are the only two options. You can play alone against the computer which can be set at different levels. A few different locations are available and there are two types of gimmick as well as hazards. A laser beam can light up tiles in your color while knocking out other players. A bomb will give tiles your color in the surrounding area. There are also tidal waves and lightning strikes which will leave you paralyzed or thrown off the board. Avoid them as best you can by steering clear of spots lighting up in purple. Luckily, the Switch comes with the Joy-Con controllers which means it is readily available to play with another person. That way there’s no need to go out and buy another controller. It’s a perfect feature and worthy of being on the console to support its portable capabilities. But the majority of your gameplay will probably take place online. You can choose from the three different modes when facing others. Either make your own room or join in on a random one; just pay attention to which mode you’re in when starting. When the matches start up you may experience a slight lag. Sometimes this will last the whole time but for the most part it disappears and the rest of it goes smoothly. But to be clear, there has yet to be a single starting which didn’t have lag at all. I can compare it to Splatoon 2 which I rarely find any lag occur. Perhaps in due time adjustments will be made.

Action is pretty hectic when running around the levels. For the most part you stay pretty calm just trying to do your best but once the timer starts counting down the pressure is on. You feel a sense of urgency as you just wish for ten more seconds to get a few more tiles flipped, however it’s all up to fate now. Music in the game is repetitive at least during menu options and waiting rooms. During the matches it’s hardly noticeable as vision will be the sense used most. The artwork in Flip Wars is very minimal but works for the kind of game it is. The character have a chibi style and are all clones of each other just in different colors. The levels and other items are all simple in design and don’t hinder the game at all. Including features such as achievements and a global leaderboard are fantastic and much appreciated. They aren’t perfect but it is a start and something Nintendo games need more of.

There is a lot of foundation laid out in Flip Wars that makes for a solid experience. There just isn’t enough to do at the moment. Something like  storymode would give it more oomph. Fleshing out the world of this tile flipping sport would be helpful too. Allow for the use of teams of two to face off. At this point there may not be enough players getting in on the fun for that to be effective. Only a couple of times have I been in a full room. Clothing options, though might get in the way of playing and hinder vision, would just make for more entertainment. 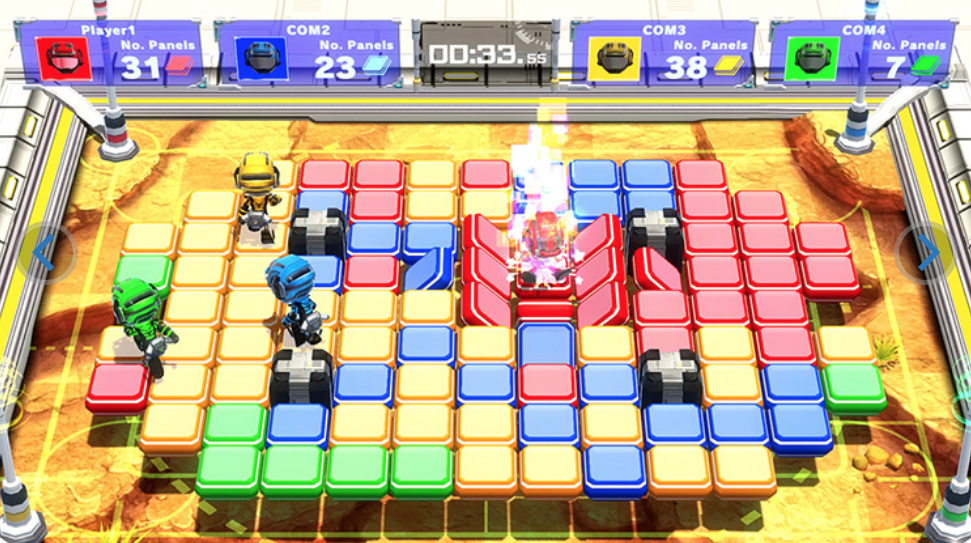 Over Fence has an average game on their hands with Flip Wars. There is so much potential here for bigger and better things, but for the time being, it’s fun and worthy of parties. If you’re into multiplayer games, it isn’t a bad choice at all. That being said, patience is key when waiting for matches to start and actually playing them. It has only been available for several days now so the fan-base is slowly developing. If purchasing Flip Wars, make sure you have others to play with in person or good enough internet connection to play online. The free access to Nintendo’s online connection is limited, but at least you can enjoy it with friends.