How is Flower more than 4.5 years old? February 2009 seems like 10 minutes ago, but somehow the time has zipped on by as one game leads to another and, finally, a new set of gaming consoles sees their release. It’s been a far longer time than seems possible, but somehow Flower is still as lovely as its ever been.

In Flower, you’re a petal on the wind, blowing through fields and causing any other flowers you touch to bloom, taking a single petal with you and adding it to your ever-growing tail. As sets of flowers bloom they trigger environmental effects that open up new areas and make the formerly-grey worlds burst with color. Brown fields turn green, the glowing orange sun sets leaves behind a dark world that eventually glows with silver as you paint the land with light, rock formations pop open with a swirl of color inside that allows you to paint the grass in your own patterns, and everywhere you fly looks much lovelier once you’ve been there. 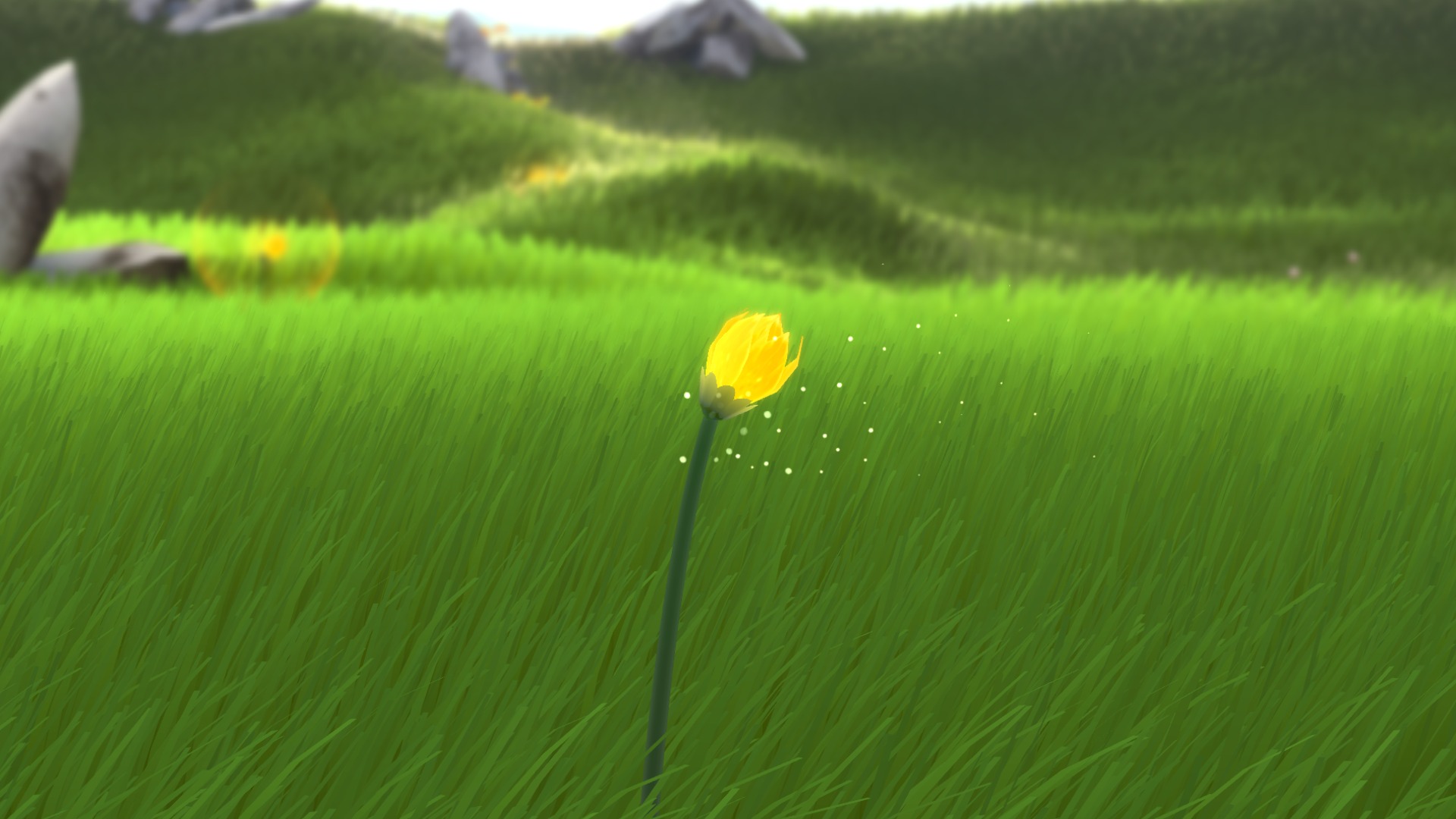 The sense of flight is fantastic, and that’s down to the (almost) a one-button controls. X makes the wind blow, taking your collection of petals along with it, and directional movement involves tilting the controller left/right and forward/back. It’s a little bit loose overall, but has the advantage of conveying a feeling of flight that an analog stick wouldn’t be able to match. Fortunately there’s only one area in the game that needs any kind of precision, and by the time it shows up the controls should be second nature. Like all of thatgamecompany’s output there’s very little challenge involved, but the experience of playing is wonderful. Flower is practically the definition of art-game.

It’s also fairly short, clocking in at six levels plus a playable credit sequence. The three secret flowers in each level are a good reason to head back in for another try, but that assumes you don’t clean them out the first time. The real reason to re-visit an area is to see it again, and this is where Flower pays off. Every level is different, with a number of set-pieces and distinct areas, and it feels good to just fly around looking at the details. The way the grass parts as you fly through it, the petals swirling in a trail; swooping high into the air for a view of a field or ravine or valley, diving back down to pop open some flowers you might have missed; bringing light to a darkened pond and listening as the frogs and insects start singing; it’s all just a lovely way to relax into a pleasantly contemplative gaming session. 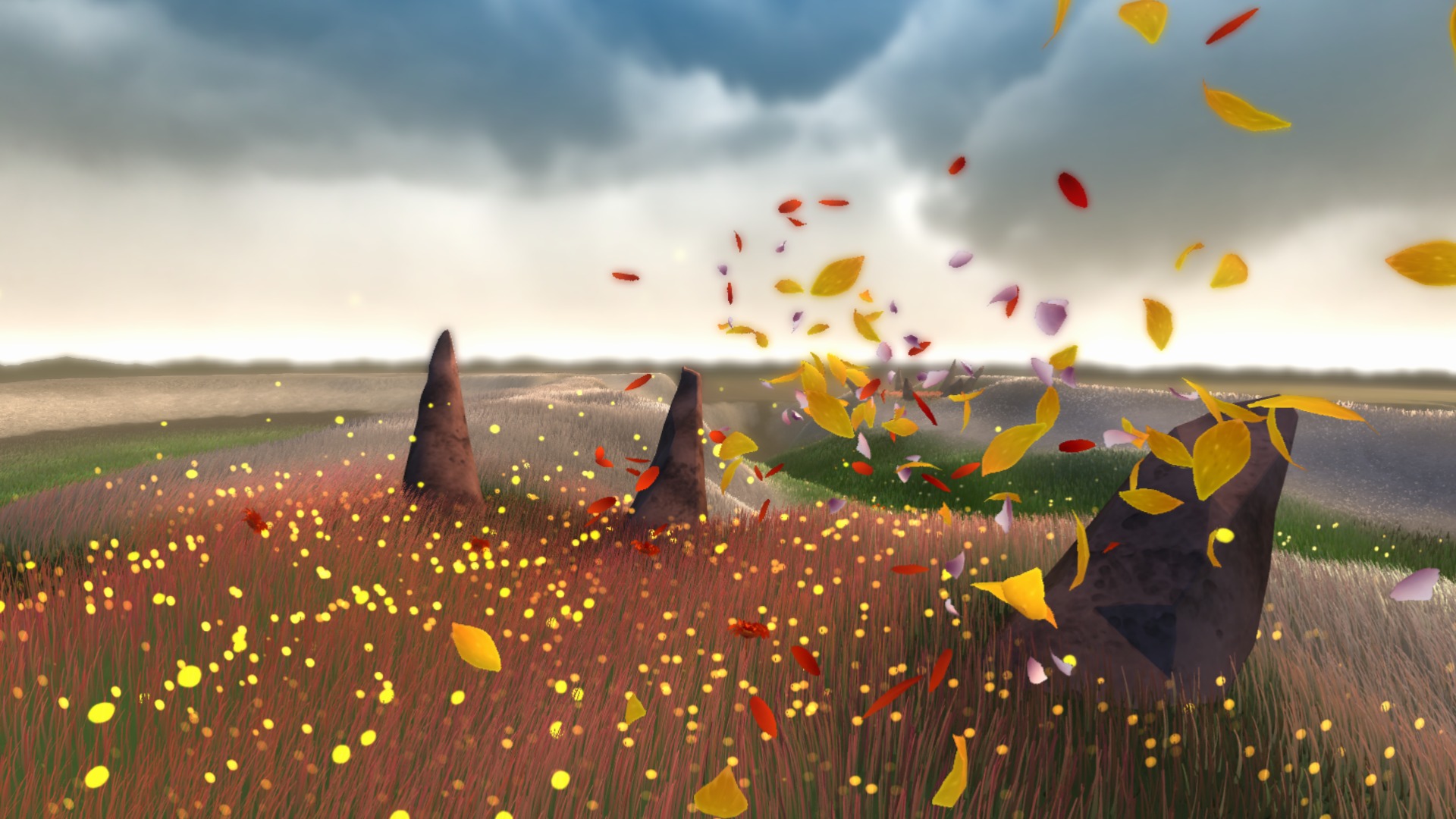 Making it a bit easier on the gaming budget, Flower is also cross-buy, so if you’ve already got it on PS3 or Vita, then the PS4 version is free. There’s no gameplay updates, no level tweaks or new areas, but it runs at a better framerate and the 1080p is noticeably sharper than the original if you put them side-by-side. The real advantage of getting it free (assuming you already own it) is that it’s good incentive to play through the game again. Flower is beautiful and relaxing, perfect for chilling out with, and replaying the full game from start to finish for the first time in years felt almost as good as playing for the first time. In an industry where four years is practically a lifetime, Flower hasn’t aged a day. It’s worth a replay if you’ve already got the PS3 version, and if you’ve never played it before, then there’s no prettier way to inaugurate your new console.