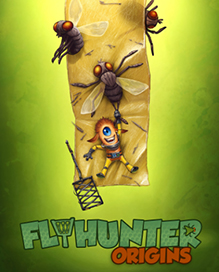 Zak could be having a better day.  It started decently enough, with just a little light sweeping of the spaceship’s hold, but after looking at the pictures of all the great flyhunters hanging on the wall how was he to resist giving the inflatable bug dummy a few good whacks with his broom?  One accidental jettison of the cargo hold’s precious bug cargo later and he’s alone on the ship, responsible for recapturing its valuable goods, and more than a little worried that his alien mob employers are going to enact Consequences of Inevitable Unpleasantness.  On the plus side, only a truly amazing flyhunter can pull it off, so if he’s not squished, eaten, sliced, zapped, roasted or mummified in spider silk just maybe he’ll get to realize his dreams.  It would probably be easier if he wasn’t bug-sized, though.

Aliens, as it turns out, are small.  Or possibly people are huge.  Either way, Zak goes on his platforming adventure through a world that’s far bigger than he is.  The little bugs are easy enough to stomp on, when you don’t smack them with the starting broom weapon, but as soon as they get spikes the stomping avenue of offense goes out the window.  Bigger bugs can be jumped on without them taking any damage, and will shake Zak off and knock off a third of his health while he’s down.  Spiders drop from the ceiling to cocoon him for later, ladybugs perform an insta-kill dash attack, and enormous preying mantises barely notice Zak running by.  The world is filled with insect menace, but a flyhunter is up to the task thanks to an upgradeable pair of weapons.

As you go through the levels there are two main collectibles to grab.  The green dots left behind by squished insect enemies are biomass, and while they’re supposedly fuel for the clone-o-matic and jetpack, the biomass gauge doesn’t actually deplete with their usage.

This means that it’s actually harder to complete a level with under 100% biomass collected than it is to get a perfect rank for topping out the meter, especially if you take the time to clear out the larger enemies.  The second collectible is insect eggs, and there’s a set amount of those per level both out in the open and hidden in secret areas.  Insect eggs are currency as well as collectible, though, and used to upgrade both the swatter and zapper gun. 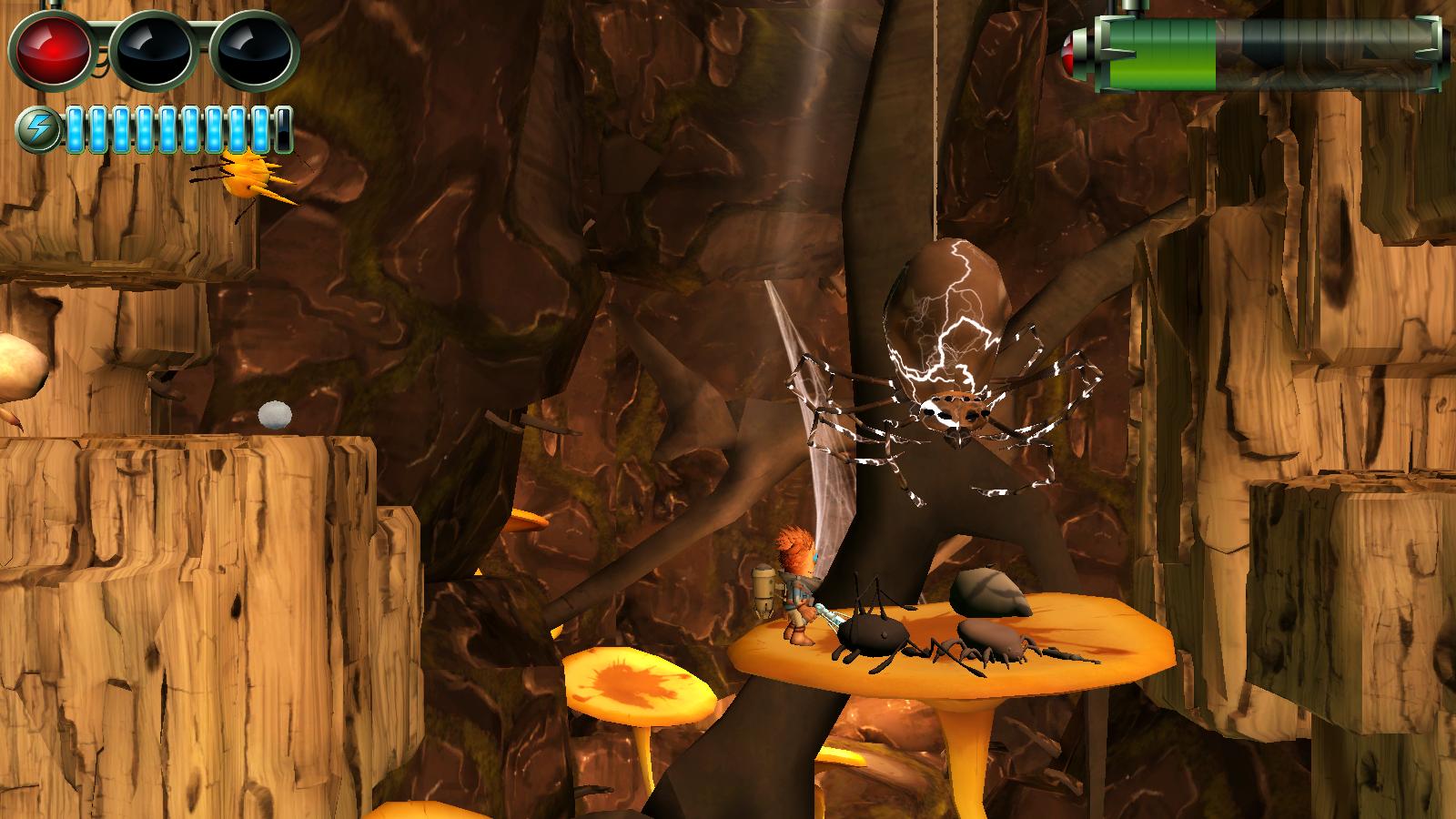 Zak’s two weapons serve different purposes, with the zapper used to stun enemies and the swatter for squishing them.  The upgrades are fairly cheap, though, and if you pay attention you can probably max out both of them by level 6.  (Or maybe level 5.  I held off on upgrading for a level or two on the theory there’d be something else to spend the eggs on, but no; just the weapons.  A fully upgraded zap gun slowly recharges itself, making conserving shots almost irrelevant, and a full-power swatter takes down even the largest insects with a handful of hits.

Add in threat-free boss fights that are impossible to lose so long as you just keep trying and, for an experienced gamer, Flyhunter Origins is more fun diversion than any kind of challenge.  Seeing as it’s aimed squarely at a younger, less gaming-experienced crowd that’s not really a problem, but even so I managed to complete 100% of everything in under four hours, except beating all levels under their target time. 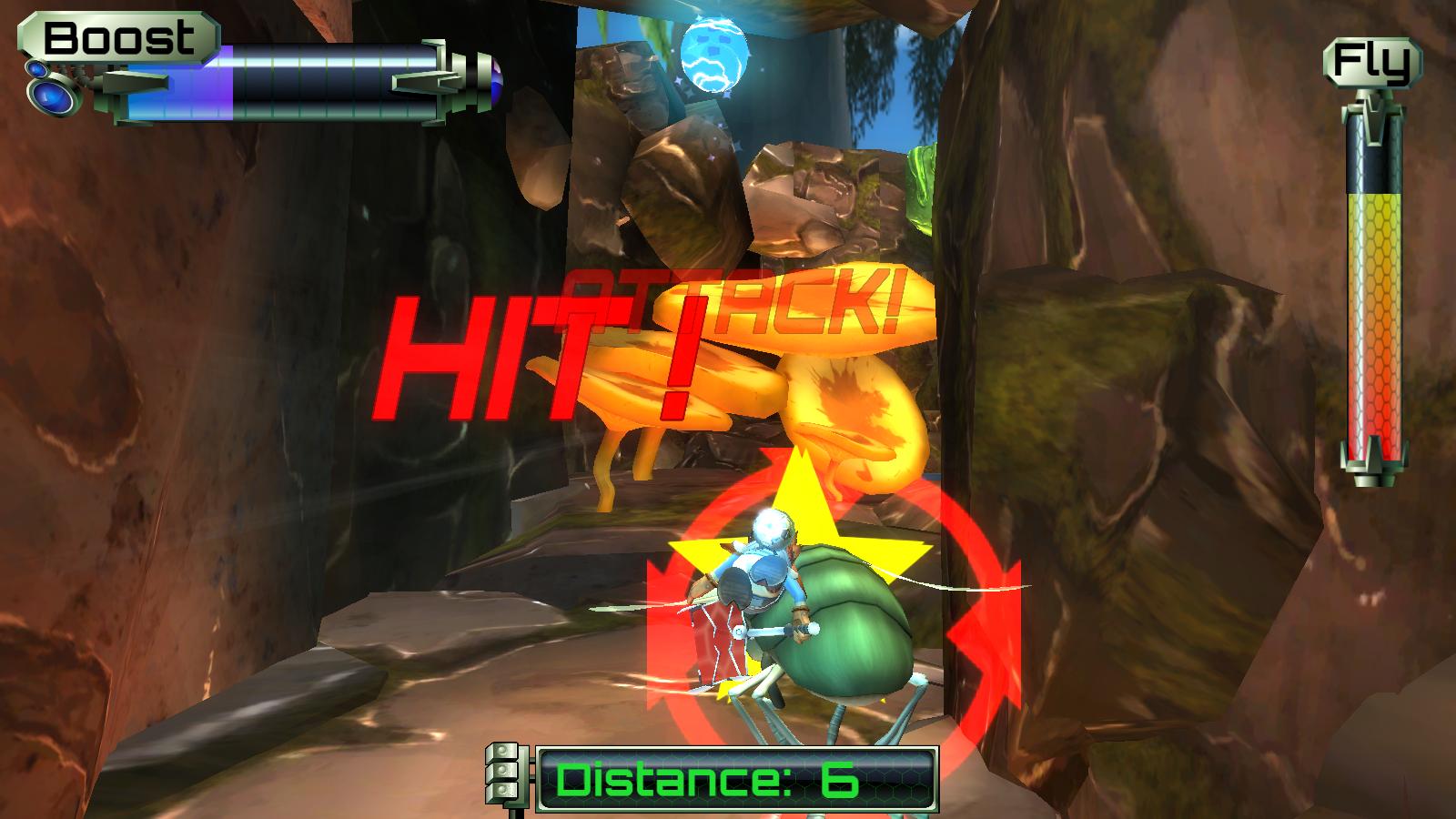 Flyhunter Orgins is also, very obviously, the studio’s first game, and while it may be a passion project there are plenty of areas where more polish would have helped.  Want to know how many eggs you’ve found in a level?  Beat it to find out.  Redo an earlier level?  Exit back to the title screen to access the level select.  Impact stars from swatting a bug sometimes appear nowhere near the insect, much less the point of impact, and the zapper’s ability to hit an enemy can be iffy at certain spots.

While the character design is absolutely excellent, the texturing on background items is near-PS2 level in places, with the first shot of the game being that of an Earth desperately in need of hi-res focus.  Fortunately, Flyhunter Origins is utterly charming at every step of the way, which can make up for a lot. 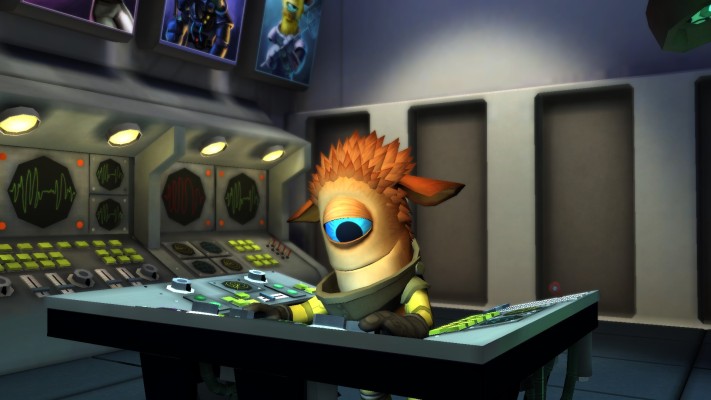 While there’s no ignoring that Flyhunter Origins is both incredibly easy and the studio’s sophomore effort, Zak controls well in the levels, doing exactly what you think he will at all times in both the standard run and jump platforming areas and the forward-scrolling fly chasing boss encounters.  Levels zig-zag in all directions, always proceeding logically but with a good amount of hidden areas off to the sides as you go up, down, and all around the ponds, caverns, alien space ships and bug-infested wilderness of the great outdoors.  It’s a good theme used to strong effect, and it doesn’t hurt that Zak is just a really fun character as well.  He’s clumsy and hapless, sure, and his boss is going to revoke his clone-o-matic privileges (while also making sure he desperately needs access to one) if he doesn’t fix the mess he caused, but Zak’s expressiveness in every situation makes him a great character to play as.  An extra layer of polish and a difficulty level above extra-easy would have been nice, but Flyhunter Origins just barely manages to rise above its problems and become a charming, creative treat of platforming action.