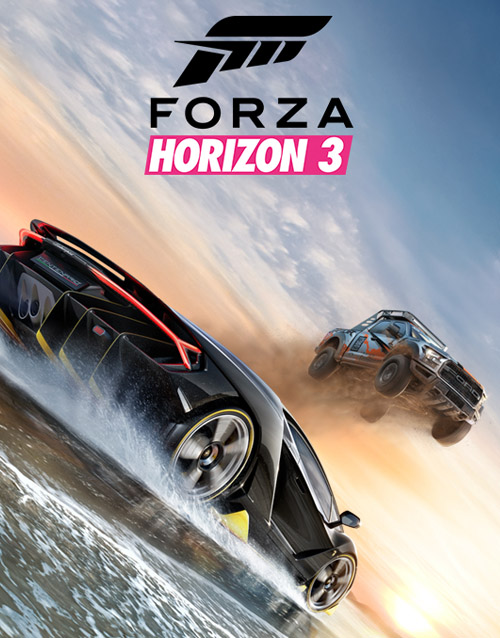 It’s hard to believe that the Forza Motorsport series is over ten years old. It has come a long way from a simple Gran Turismo competitor, developing into an annual franchise that satisfies all types of racing enthusiasts. Whether you want pure simulation or driving through an open world in a slightly more arcade racer, Forza has something for everyone. Among the two, Forza Horizon appeases the latter group of players, offering absolutely beautiful vistas to drive through while sharing your experience with friends. Just when we thought Playground Games couldn’t top themselves from the luscious setting in Forza Horizon 2, the UK-based studio brings us to the far more exotic country of Australia, where players will find themselves driving through not only the dry outback, but a highly diverse range of locations. It’s not only about racing around a standard course, but traversing the vast world Playground Games has crafted, and what a world it is.

Originally beginning its days in Colorado, USA, the Horizon festival has expanded greatly, with the previous event taking place in the luxurious Central Europe, and now travelling to the rather exquisite country of Australia. Players will once again take control of a racer whose goal is to participate in as many events as possible, racking up attention and fans. Doing so will allow the festival to grow to an exponential size, unlocking even more events; it’s a devious cycle that ensures there will always be new activities to participate in. While the boiler plate story won’t win any awards, the biggest and best part of the experience is the open world. Forza Horizon 3 is more broken up into more areas than its predecessors, with each Horizon site having its own theme. While there’s still a strong amount of variety within both Colorado and Central Europe, Australia seems to bring even more to the table. There’s obviously the dune-filled deserts to propel your vehicle to unbelievable heights, but there’s also a modern city to race through, a tropical rainforest, sandy beaches, grassy plains and plenty more. There’s no getting bored in Australia. 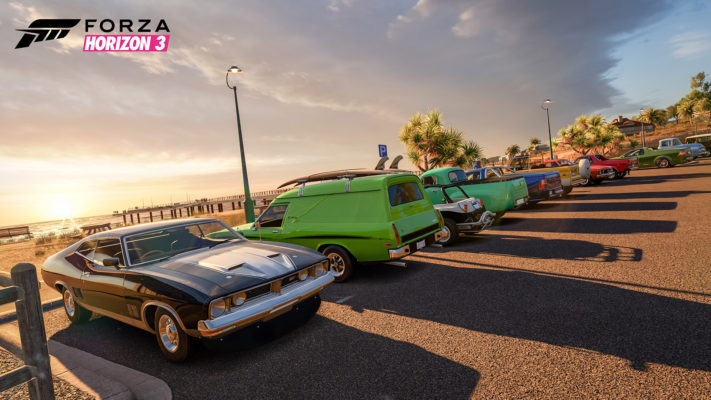 All of this, mind you, is not limited to paved roads, as you’ll be constantly encouraged to go off-track. This is easily the best part of Forza Horizon 3 as the off-road races and showcase events rival that of games such as DiRT. There’s just something about dust and grass kicking up when going off-road, and how loose the traction becomes that feels so appealing. In addition, the area Playground Games has developed is not only varied, but grand in size. Obviously it pales in comparison to something like The Crew which has an immense map to traverse, but Forza Horizon 3 is far more densely packed with events and unique structures being planted on every corner. One minor issue with the world is regarding trees and how some of them can’t be driven through. Of course this is real to life as usually if you hit a large tree at 200 km/h, your vehicle is obliterated, and you’ll be lucky if you survive the ordeal, but most of them here can be taken down with ease, and the ones that can’t are sometimes hard to identify. There’s nothing more infuriating than slamming into a tree that you thought you should be able to run down no problem. Outside of that, though, Australia is an absolutely serene place to drive through with some of the most memorable scenery available.

In terms of core gameplay and event structure, not a lot has changed. There’s the typical exhibition matches and championships that challenge the player in either going around a track or getting to a certain destination first. There’s also barn finds, speed traps, danger signs (jumps), drift zones, bucket list challenges, and so forth. The key word this time around, though, is customization as almost everything is made to be tailored around the player and how they want to play. Going into an event, drivers are able to participate in the event that was meant for the location, but if you don’t have a vehicle that fits the requirements, you can create your own event. Doing so might discourage players from trying something out of their comfort zone, but you’re able to upload these unique events online for others to try. With this, there’s just so much to do in the world that it’s a bit overwhelming; completionists will certainly have their work cut out for them. 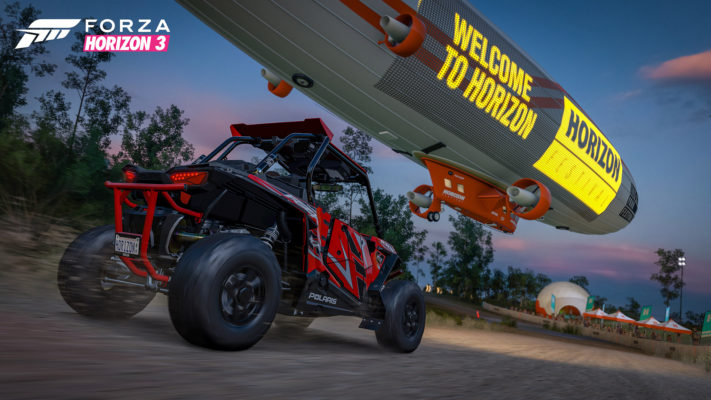 Not a lot can be said about the driving mechanics other than that Turn10 Studios and Playground Games continue their streak in making some of the smoothest and most enjoyable racing games on the planet. Whether you want to go 400km/h down the highway or relax in a Rolls Royce, the mechanics in Forza Horizon 3 are there to suit the player, and they happen to be the best available. A lot of players will have to adjust to driving on the left side of the road, but it’s something that will be picked up fairly quickly. There can be some improvements made, though. For example, the rewind feature has been a staple of the Forza series for quite some time now, but it would be great to have more control over it. In addition, the checkpoints during races can also be a bit finicky, sometimes not recognizing when they’ve been hit. Finally, AI Drivatars and the regular driving populous in the world are be overly aggressive. The number of times when I was hit head-on in my own lane is far into the double digits, and no one seems to know how to merge properly. Thankfully, most of these are minimal issues that don’t detract from the overall experience.

Online is an important aspect to any racing game, and it’s exceptionally useful in Horizon 3. Of course players don’t need to have a full list of friends or even be online to have fun racing around Australia, but a good deal of the experience is designed to complement both competitive and cooperative play. While there’s the typical online modes such as Infected, Flag Rush and King, the biggest new inclusion is the ability to play the entire adventure cooperatively with friends. In addition, blueprints have been added to various parts of Australia for you to customize a bucket list event. This entails selecting a vehicle and meeting certain perimeters. For example, players could choose their Ford Mustang Boss 302 from their garage, go down a specific road and hit a certain speed at a speed trap. This will then be available to be uploaded online for the world to try. It’s not only about speed, though, as there’s skill score challenges, getting a location in a set amount of time, hitting a ramp for air time, and so forth. Overall, the competitive and cooperative aspects of Horizon 3’s multiplayer have been improved, offering even more bang for your buck.

Unfortunately, not all online connectivity aspects are great as Convoy is less than ideal. In theory, the concept of this mode is fantastic: have friends join a group, via their Drivatars or online, in order to cruise around with them. Unfortunately, it’s easily the most frustrating part of Forza Horizon 3. Without notice or really any indication, you will frequently end up in convoy parties, and the only way to identify this is by the small orange markers on the mini-map. The problem is that the AI is the worst. They will constantly get in the way and tailgate your vehicle until you leave. It’s like having a wasp constantly stalk you because you were simply in its vicinity. It took us roughly eight hours into the game to figure out that one of the icons in the home menu actually changes from a random activity tracker to disbanding the convoy, despite not accepting to join one in the first place. It’s great in theory, but terrible in practice. 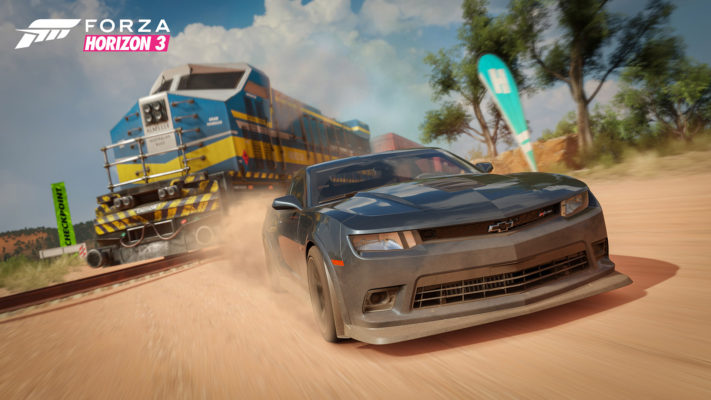 Arguably the biggest disappointment Forza Horizon 3 holds isn’t within its gameplay, but instead is located in its menu system. The menus have been grouped up so you don’t have to physically move to specific locations on the map in order to buy a vehicle or apply an upgrade, but the new central hub can be frustrating to deal with. The issue here is that, while it looks streamlined from a design perspective, there’s a lot plaguing it. Almost everything in this system has a load time attached to it and will take longer than necessary to get where you want to go. Granted, these load times aren’t too long, but considering there’s so many layers and sub folders for each selection, it quickly adds up to be a nuisance, even if you just want to do something simple. The newly added auction house is also a bit confusing in how it handles bids. If an auction doesn’t go in your favor, naturally you’d think the credits would go right back into your bank, right? Well that isn’t the case as you’ll need to navigate the menus, select the “My Bids” icon in the corner, have it load the auction details, and then select “Collect Credits” to get them back. It’s a baffling system that could easily be streamlined to either handing those credits back or docking them after winning the auction. There are also other issues with the auction house, such as having to load a separate screen to place a bid, and there no way to identify if you have a vehicle already in your garage. Suffice to say, while there’s some improvements to the menu system, it leaves a lot to be desired.

Visually, Forza Horizon 3 will take your breath away. Playground Games have done wonders to the vast landscapes of Australia, bringing to life four sectors of the country. It was almost a given that the rainforests and valleys would look spectacular, but somehow the developer was able to make even the desolate desert look appealing. Outside of the environmental design, which is primarily rural areas with only one city setting, the vehicles have been crafted with a staggering amount of detail. There’s a huge lineup of vehicles to be driven, and each one has been modeled to perfection, to the point where Forzavista has been implemented so you can enjoy the fine level of craftsmanship that has been put in. Unfortunately, while the core game looks spectacular, especially when racing in the dynamic time and weather, we did run into a number of technical issues throughout our travels. There wasn’t anything game breaking or any serious bugs to speak of, but Horizon 3 did crash numerous times, along with the occasional freeze and frame rate stutter during cutscenes.

Forza Horizon 3 retains everything we’ve come to love about the open world racer while incrementally improving upon its formula. The leap isn’t as significant as it was between the first two games, but Australia ends up being a highly appealing setting to drive through. From flashy showcase events to championship races, you’ll rarely be bored, and that’s just talking about the single player portion. Multiplayer is where Forza Horizon 3 shines the brightest as there’s just so much to do, and the online connectivity among friends has never been better, to the degree you can play the entire campaign cooperatively. That’s not mentioning the overwhelming number of vehicles that are obtainable and the car club mechanic, accelerating Forza Horizon 3 into arguably the best racing game on the market for both enthusiasts and casual players alike. There’s still some annoyances in the menu system and the occasional crash will occur, but we’re treated to an unparalleled racing experience.