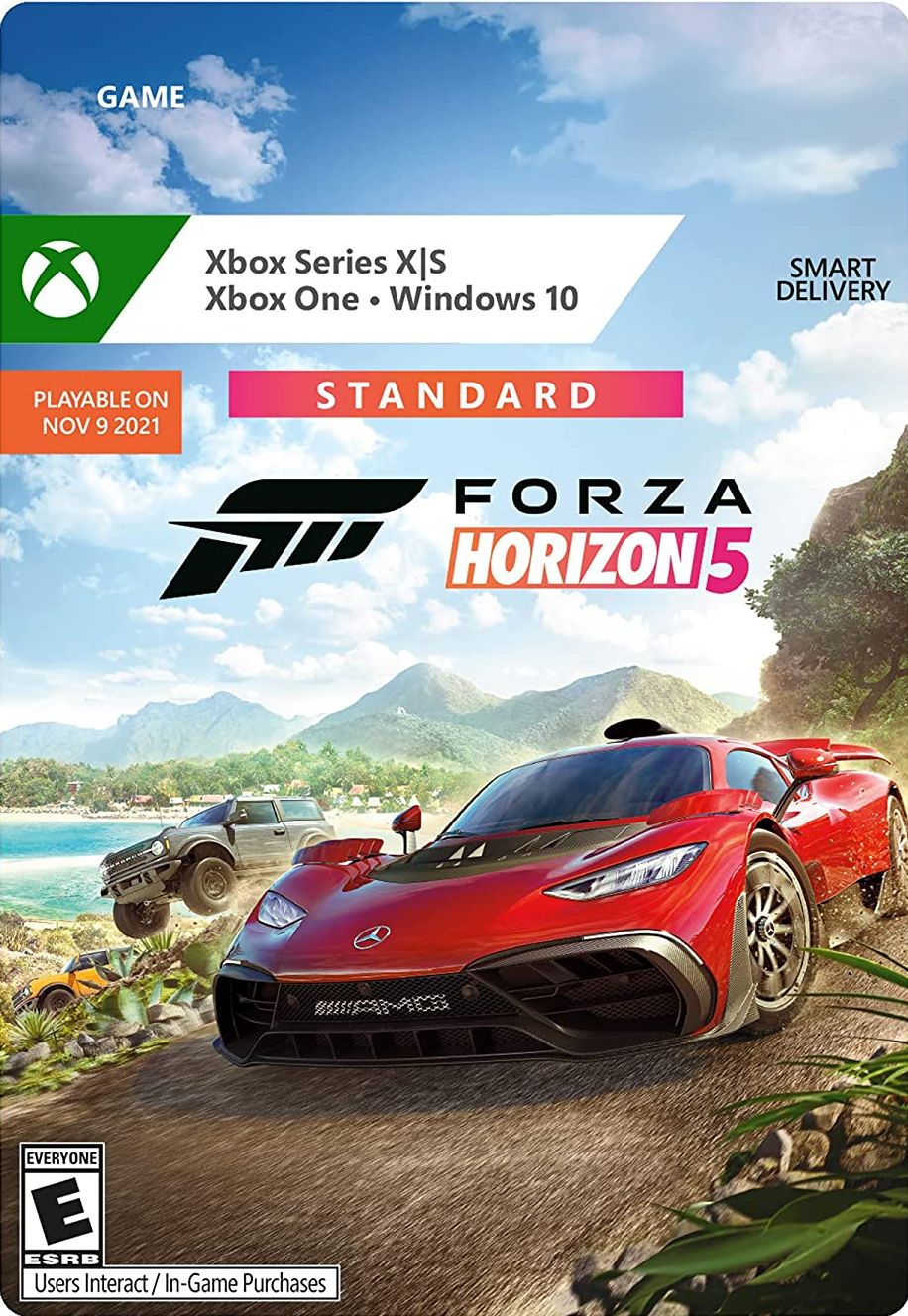 When Playground Games and Turn 10 Studios released the original Forza Horizon back in 2012, it changed the landscape of racing games for the foreseeable future. Moving to a completely open world racing experience that was geared towards everyone by offering a pick-up-and-play mentality, it also provided the opportunity to improve racing skills with an addictive physics engine that felt realistic. Nine years later, Forza Horizon 5 is doubling down on its inclusion mentality by being available on all Microsoft Platforms. This review takes a look specifically at the Windows PC version of the title, which is the quintessential version if your hardware can handle it.

The Forza Horizon series has offered a theme by combining music festival culture and car culture. It has created its own universe that makes its players wish for this unrealistic idea. The closest thing I could relate the series to would be something that Jeremy Clarkson, Richard Hammond and James May from The Grand Tour would participate in and Amazon would back the festival portion. If you’ve ever wanted to take a two million dollar car and drive off a cliff or into a river, this is the type of extremely fun gameplay the series offers.

Forza Horizon 5 takes its open-world design over to Mexico, as the previous game took place in the United Kingdom. Mexico is much more appeasing to the eyes and an excellent choice for a location. Playground Games managed to capture a summarized version of the country. Scenery includes coastlines and beaches along with deserts, the Baja region, wooded mountains areas and even the jungle. All these areas are beautiful, including the little towns that are set in-between and the buried ruins spread throughout the area. 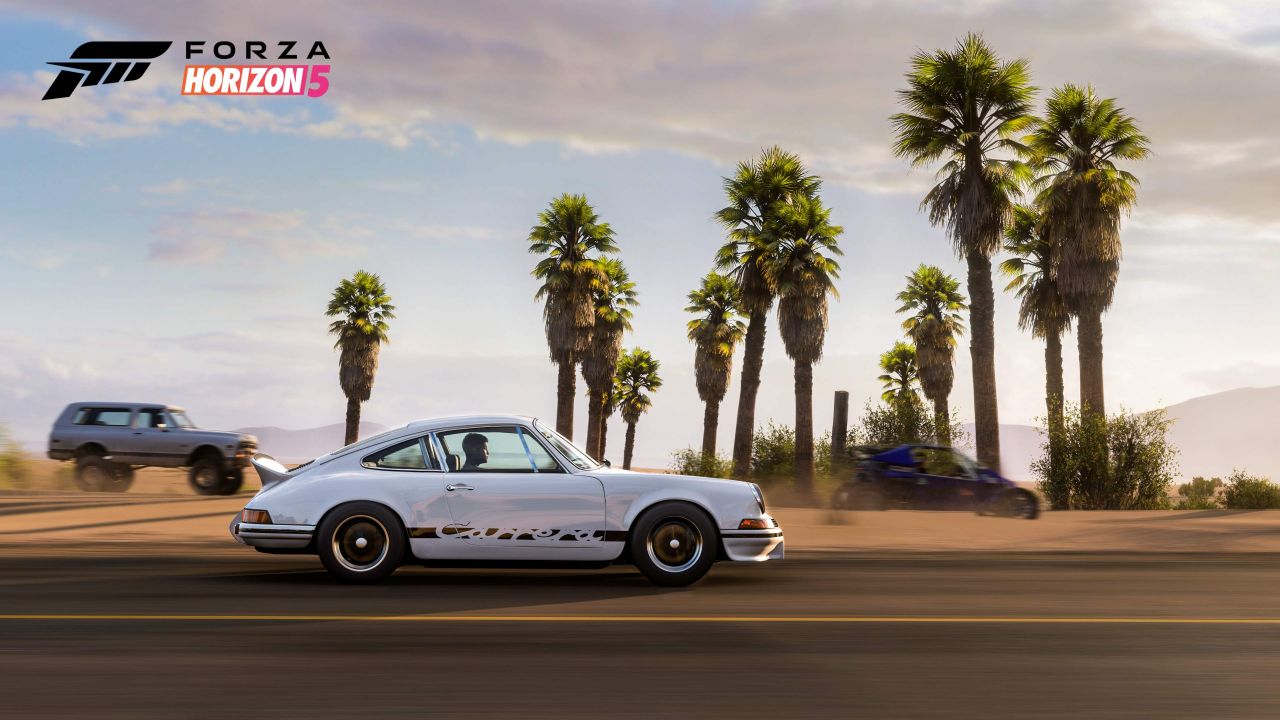 There’s no doubt that both on the latest generation of consoles and PC Forza Horizon 5 is a technical marvel. The console versions offer a visual and performance mode option for 4K resolution at either 30 FPS or 60 FPS. The PC version depending on the hardware, however, can enable higher frame rates but not necessarily stable. Running on a RTX 3080 would generally run at 4K with ultra settings ranging from 55-70 FPS. Meanwhile, on the lower end, a 3060 Ti would hit around those same marks at 1080p. Playground Studios has enabled its own version of DLSS to allow performance or quality options. Dynamic Resolution is also included to help maintain a more stable experience as those frame rates were with no visual assistance.

Ray Tracing is touted as being included, but there seems to be confusion out there on how this works. Looking at the screen space reflections on the car models would have you assuming that Ray Tracing was apparent somewhere during gameplay. This is implemented so beautifully that the cars in Forza Horizon 5 are the best looking cars of any racing game to date. Ray Tracing only exists in Forzavista, however, which is the option for viewing up close details of the cars and doing parts upgrades. If there’s chrome anywhere on these cars, including the engines, the reflections are blindingly clean. Lastly, the damage model is mild as there will be dents and scratches along with a cracked windshield. 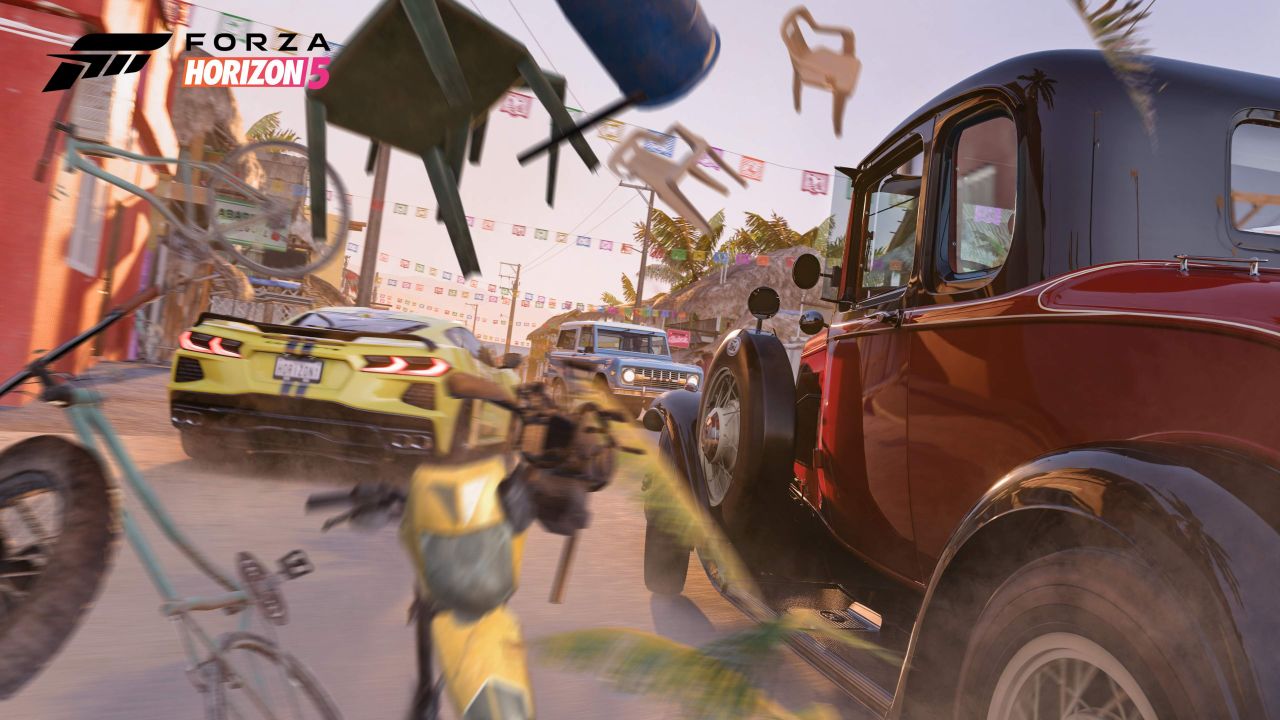 The car models are drop dead gorgeous, but coupling that with the detail and draw distance of the environments will leave you drooling. The exterior car view is what hogs the performance. If you switch to the cockpit view, in which every cockpit remains exquisitely detailed, you’ll gain anywhere from 15-20 FPS. That’s a large jump and shows just how demanding the car models are. The other chunk that can eat performance comes from the amount of objects on the screen. Going into the jungle or a heavily-vegetated area is where frame drops would hit the low-to-mid 40s. What’s weird is that the shrubbery and grass are two-dimensional objects, so you wouldn’t think it would cause such a hit. This is also without the Dynamic Resolution enabled, but this is the brunt of where the drops happen.

Adding even more to the beautiful visuals in Forza Horizon 5 is the dynamic weather system. The way that water beads on the car during rain or going through a puddle looks extremely realistic. Cloud patterns change, which also effects lighting, and can have you doing double takes at times because you become unsure if you’re still playing a game or not. Not to mention that day-to-night transitions offer a completely different look at different areas of the map. Places will light up with neon lights and give a whole other perspective that’s worth revisiting. There’s a photo mode to capture these moments, but I found it difficult to use. 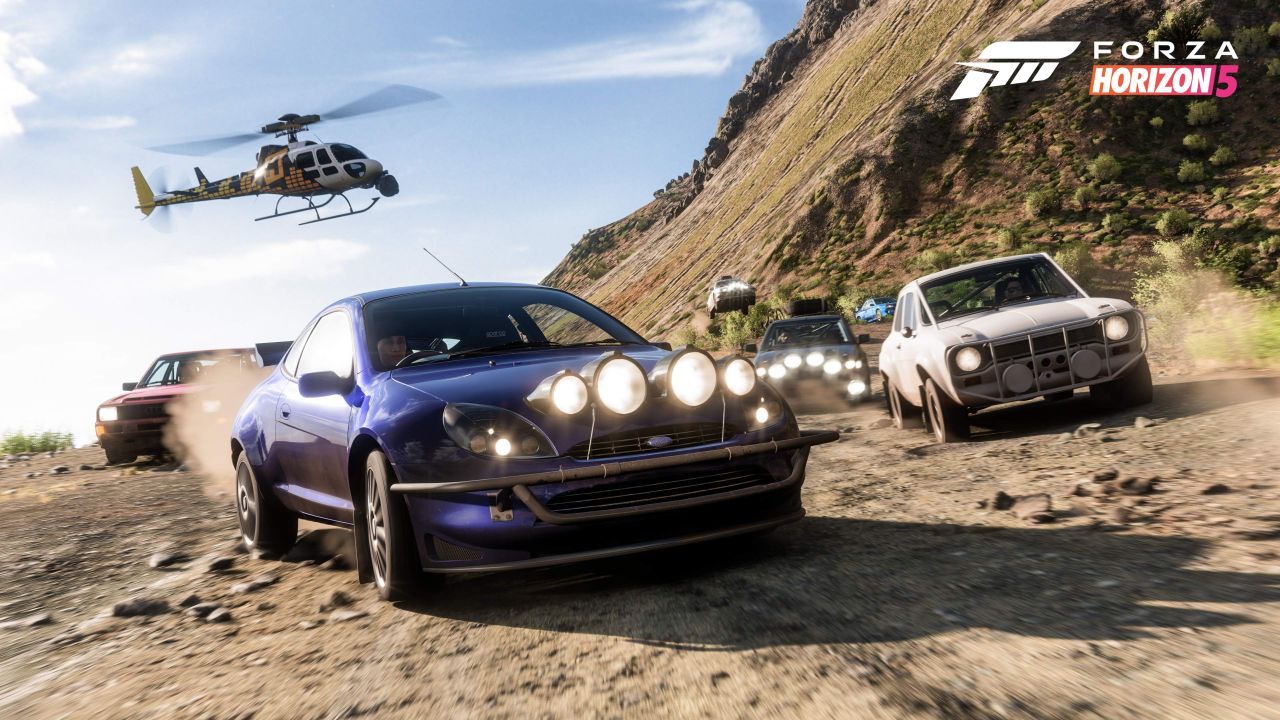 Playground Games has always managed to provide an overwhelming amount of things to do in the Horizon games. The team has changed things up as the flow feels more streamlined and easy to process and has included new aspects to make it feel fresh outside of just changing the setting. The overall gameplay design remains the same as it resembles fetch missions with cars. Drive to one location, do a race, get rewards and then on to the next. There’s a lot of filler to eliminate downtime, but it’s worth just cruising around in this game.

The biggest change to how progression is achieved is almost a breakdown of chapters. Expeditions will lead you to hidden locations that involve completing small tasks to unlock barn finds, which are cars that have been left for dead. These take place in abandoned ruins or other locations. Completing these spreads the festival throughout the country and creates festivals in other cities. All of this opens up more and more to do, and it’s a nice change but ultimately holds back from the core racing of the game. Each new festival location offers new missions in a different scope of racing whether it be road, off-road, rally or street. 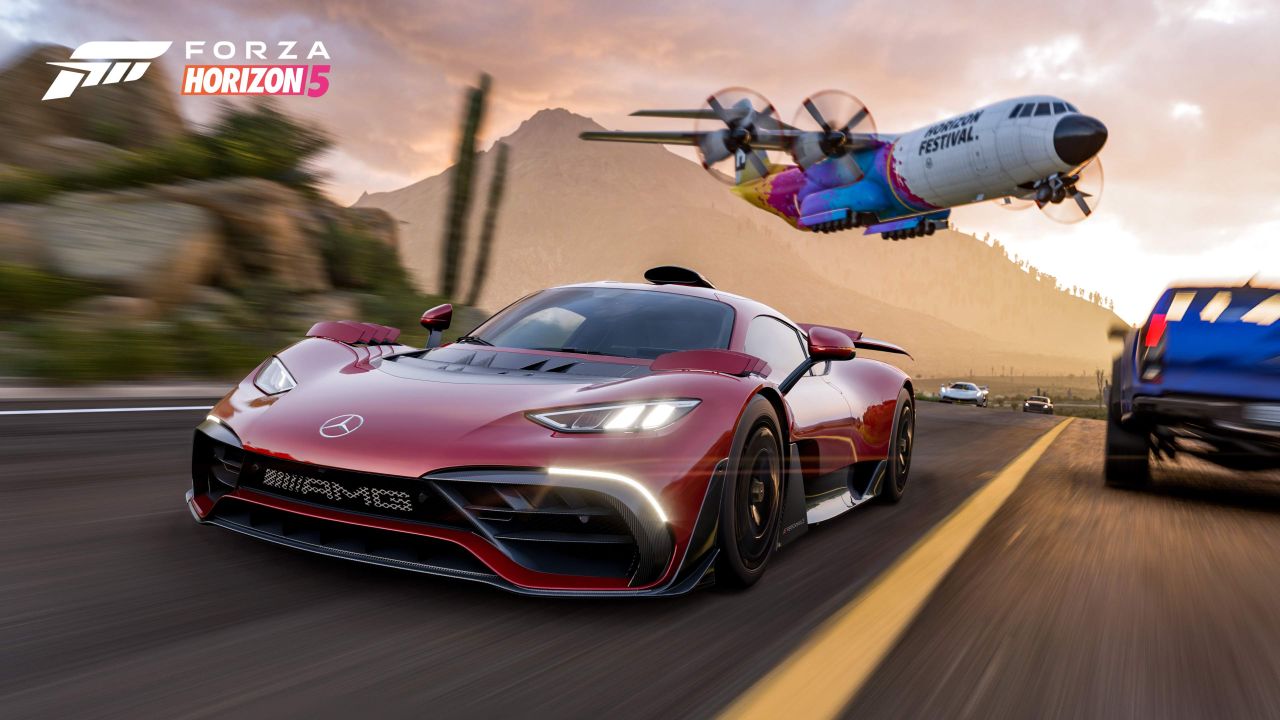 What speaks the most to everyone about Forza Horizon 5 will be the cars. There are over 500 at launch and the two headliners for this game are the 2021 Ford Bronco Badlands and the Mercedes AMG-One. While these aren’t necessarily a car you will ever see, the game offers a ton of the latest cars you won’t see in other games and will more likely see in real life. Want to test drive the latest Corvette, Aston Martin or a slew of latest Ferraris? This is a way to experience it. Other games have either outdated cars or spec racing cars while Forza Horizon always brings fresh cars that can also be somewhat customized or tuned.

The racing physics are carried over from the main Forza franchise, but much more approachable. This is basically how the cars react and feel, but are easier to drift around corners without losing control. Even cranking up to the Simulation option for controlling didn’t make things much more difficult than the default. ABS, traction control and other assists can be disabled. Various types of cars handle differently and going extremely fast can be anxiety-inducing to offer variety to the racing. Trucks and off-road vehicles feel like tanks while rally cars will have you easily doing donuts. 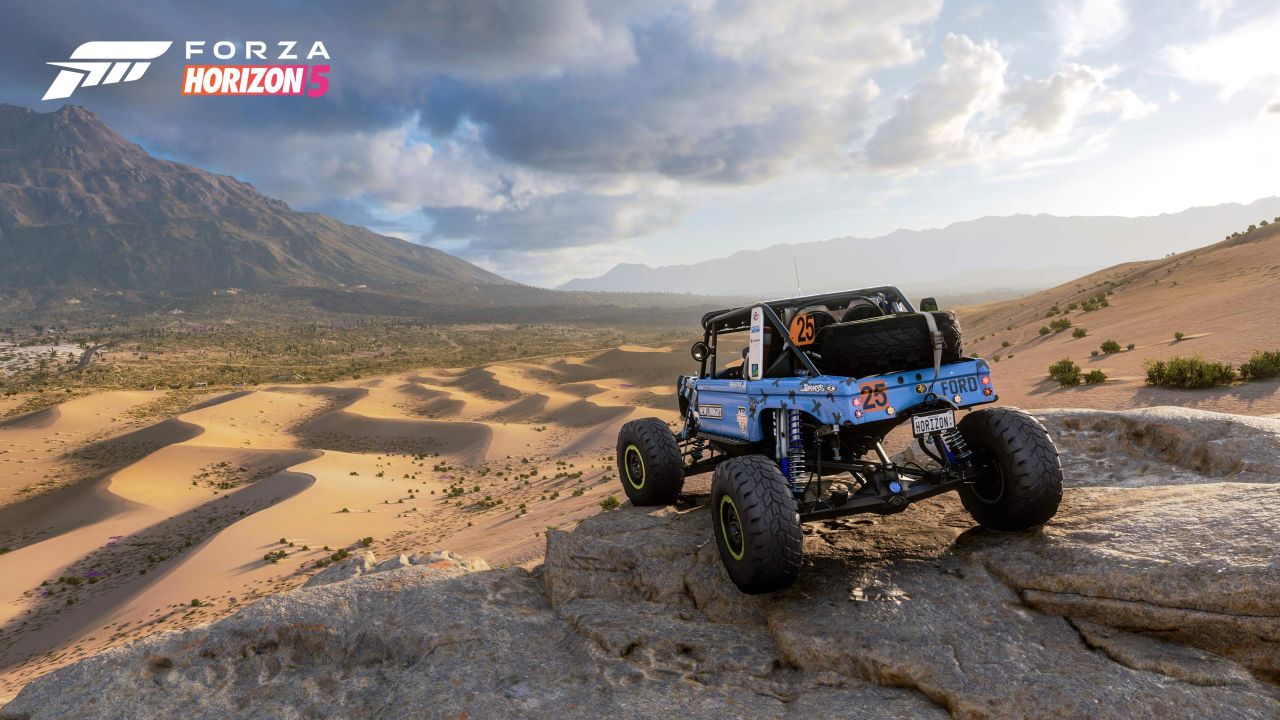 The non-racing focus throughout the game seems to be cars and family, and the cliche and predicable dialogue will constantly remind you of this. The attempts at humor are cringe-y and you’re forced to hear this during the Expeditions to progress the game. The music provides real artists varying from various alternative rock artists to EDM, which are groups that you would hear at a festival. It helps capture that festival feel, but if you’re not a fan of this, the different exhaust notes remain excellent from each car. While you’re not going to get the specific Ferrari exhaust note in the game, different engines offer sufficient and clear noise to add to the experience.

The multiplayer focus has been improved with Forza Horizon 5 as new modes have been implemented to play. What’s 2021 without a Battle Royale mode? This has been added along with a new arcade mode that will have you playing games such as smashing pinatas in an ancient ruin. The Event Creator Toolset will allow you to create routes and tracks, game modes and custom cars. You’ll still encounter other players in Horizon Life while cruising around, and you can link up with others to race. 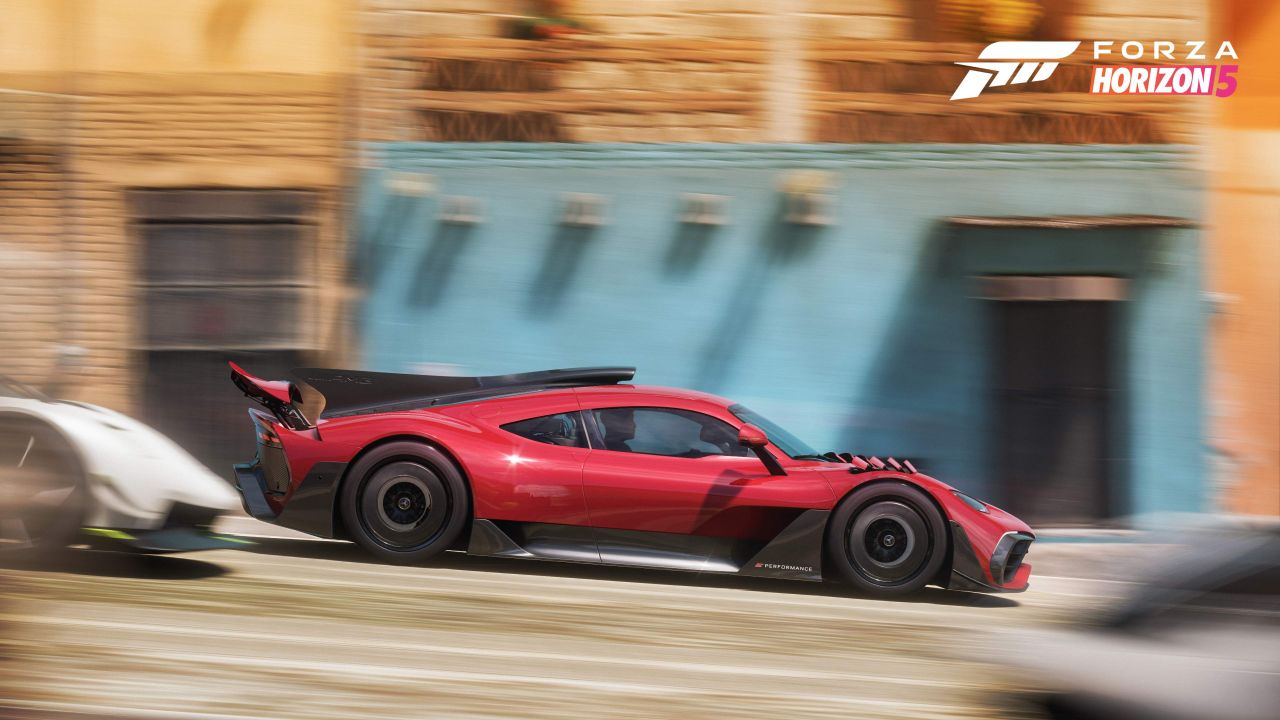 Forza Horizon 5 is undoubtedly a visual showcase and technical benchmark for PC and Xbox Series X owners. If you have the hardware to run this game on PC, this is the choice to make. Horizon 5 is also on Game Pass, so you can test out the settings to see if your PC can handle it. These are the best-looking cars in any racing game to date, and the environments are beautiful. Forza Horizon 5 does an amazing job of showcasing the beauty of Mexico. The racing remains fun with more multiplayer options and new Expeditions and other fresh events. Expeditions do tend to take way from the racing, but deserve kudos for trying something new. The formula also remains the same, for better or worse, but you’re always going to have something to do in the game. Ultimately, Forza Horizon 5 is the best in the series thus far.