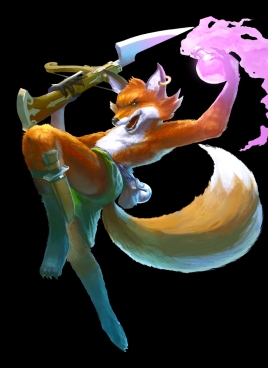 The rise of indie gaming over the past decade has led to countless games inspired by the past — but few have been so good that they feel like seamless entries in their time. Shovel Knight felt like an NES platformer with modern conveniences thrown in — and as a result, wound up being one of the most revered indie games of all-time. Before that, games like Fez and Braid took platforming tropes and played with them in new ways. Fox n Forests mixes in a lot of the fast-paced action that made 16-bit platformers fun, but with a graphical style that is more in line with 32-bit games. The 32-bit era was an underrated golden age of 2D platformers in part due to the Saturn seeing many of the best entries – but only in Japan, while North America didn’t receive as many on either that platform or the PlayStation.

Fox n Forests feels like something that would have been right at home in that time frame — only with modern aspects that have been changed up in just the right ways. The core game sees Rick the fox out to grab loot and destroy enemies to uncover a large-scale mystery so the forest can have peace again. It isn’t the most riveting thing in the world, but it accomplishes its goal of setting the game into motion. Rick is a resourceful fox and uses his crossbow as both a way to attack from close-range with a melee attack, but also to shoot enemies from far away. It’s a versatile tool and one that works well most of the time. Choosing between melee and long-range isn’t done with a different button press, but is instead based on how far away you are from either an enemy or object.

This has its own pros and cons. On one hand, it’s nice to be able to know that you’ll be able to do lower-damage attacks from afar and minimize your own risk. On the other, it would be nice to challenge yourself with a melee-only option — and having each type of attack mapped to a different button would allow that. As it stands, it does work fairly well to know that if you’re a certain distance away, your attack can essentially be pre-planned, but it would be nice to have more variety so you can vary your attacks up more. As it stands, you’re taking far more risk getting up close with melee combat as enemies have longer-range attacks to use. Much like playing a Mega Man X game with either a sword or a blaster, there is a bit of risk versus reward at play here. 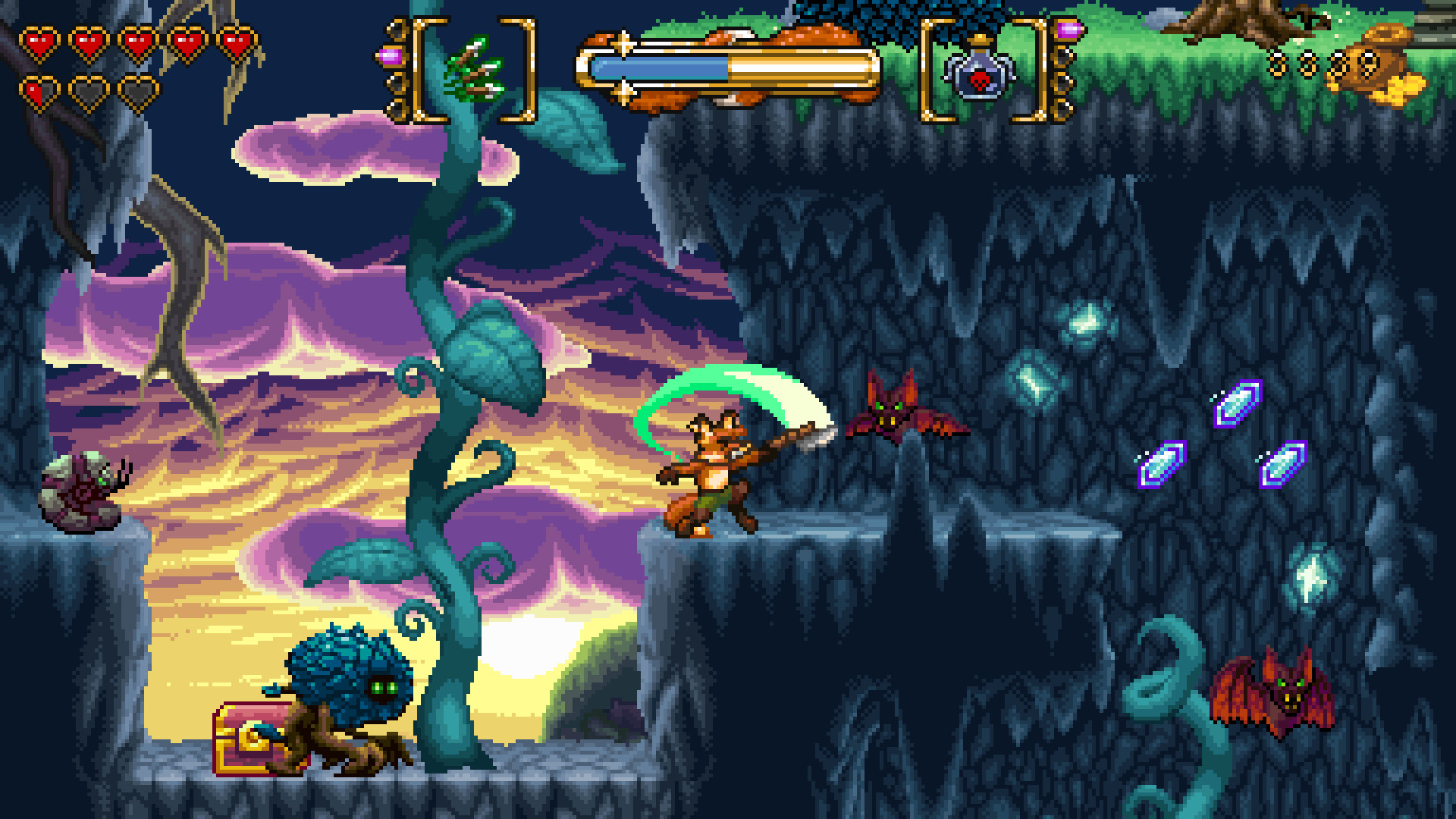 The crossbow arrows do a bit less damage, but put you at far less risk to take damage. Going with melee attacks is more satisfying, but will place you so close to enemies that you may not have time to react in case they go after you. Careful planning saves you in most encounters, but some just hop up out of nowhere and attack. Fortunately, the game is generous with regards to your default health bar and it’s easy to add new heart containers by purchasing them after a level. There are some light RPG-esque stat progression features mixed into the game, but it’s integrated in such a way at to seamlessly blend into the platforming.

Adding potions to your arsenal allows you to do more kinds of damage, and some enemies wind up being weak to certain potions. This is something you only really learn through trial and error — which is a bummer. This results in wasting at least one potion per stage until you figure out what enemies are weak to which potions. Earning enough money to get all of the potions is a chore and something that takes a few levels worth of grinding to accomplish. You can also grind to earn new arrow types that will exploit vulnerabilities in the environment and enemies — so there are some valid reasons to go through stages more than one time beyond just trying to get loot.

There are more puzzle-platforming elements here might be expected and they work out marvelously. You’re able to shift from spring to a winter setting with the touch of a trigger button and doing so is the key to progressing through most stages. It allows you to hop on new parts of the environment that spring up with the change in climate or enables you to slide across things like ice that were once waterfalls you couldn’t jump over. This mechanic enables you to also find more hidden passageways to earn money faster — so it’s imperative to experiment. Fortunately, you get a fairly large magic meter to use this and it doesn’t feel like you’re ever up against an unfair time limit to use it to your benefit. 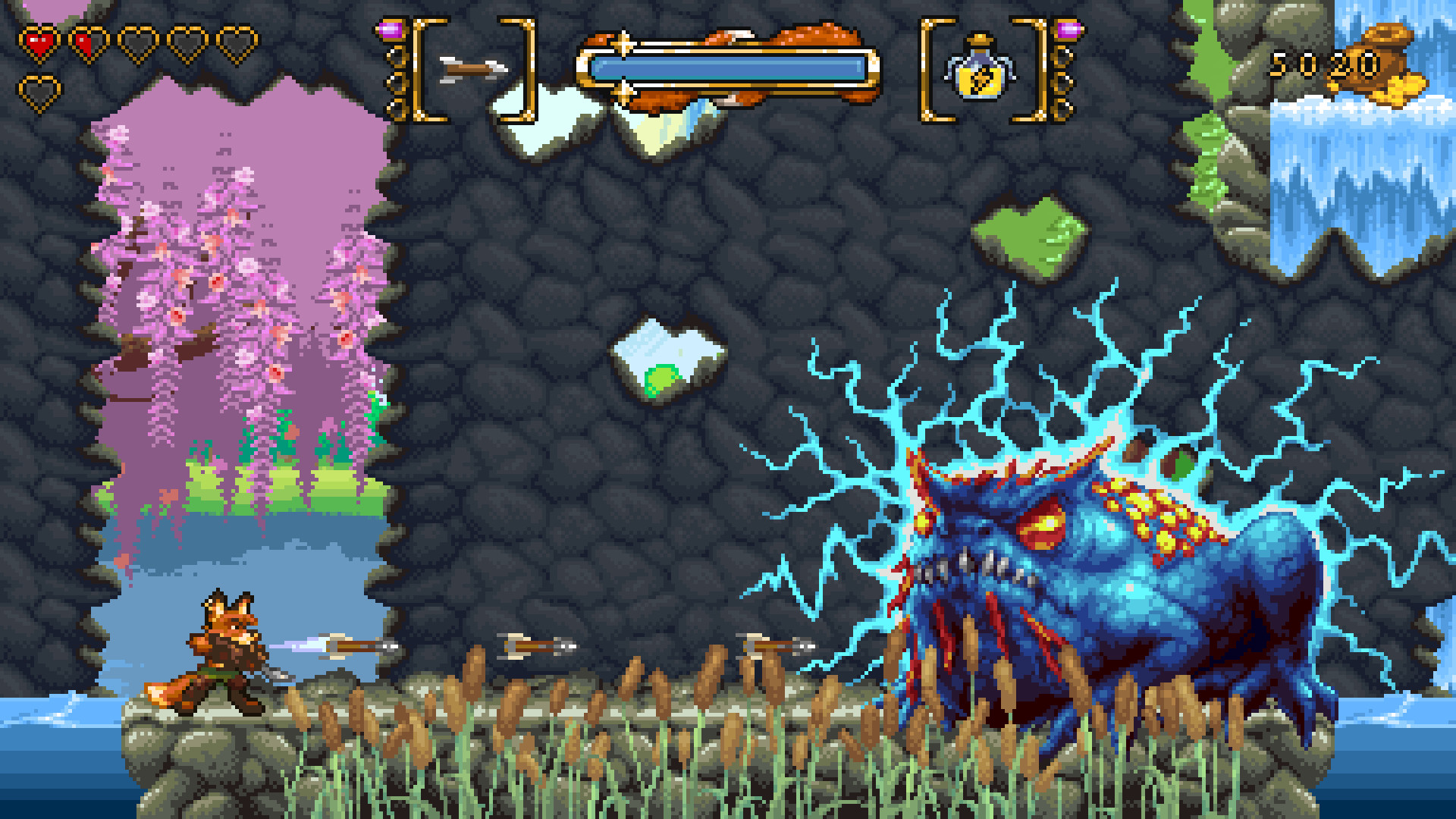 Visually, Fox n Forests brings the best things about 32-bit pixel art into the modern age. Games like The Adventures of Lomax and Astal featured rich colors throughout their worlds and FnF does the same thing here. Rick and his enemies have detailed sprites and a lot of color variance on them. Different shades of a fur color are visible on animals, while trees have varying shades of brown for their bark. Facial expressions are also vivid, while environments are highly-detailed. Like the character art, every piece of the environment is given a wide variety of colors to make it come alive and seem as realistic-looking as possible within a fantasy setting.

The sound design is also strong, with a whimsical soundtrack and powerful sound effects. Each attack sounds different, with a basic arrows soaring through the air quickly — but not sounding all that damaging when compared to the violent and swift melee attack that slices through the air. Meanwhile, your elemental magic attacks all sound like they should and it sound satisfying to hear the screams of enemies as you defeat them. There’s a lot to like about the audio, even if the soundtrack does fall short of being top-tier despite it being good overall. 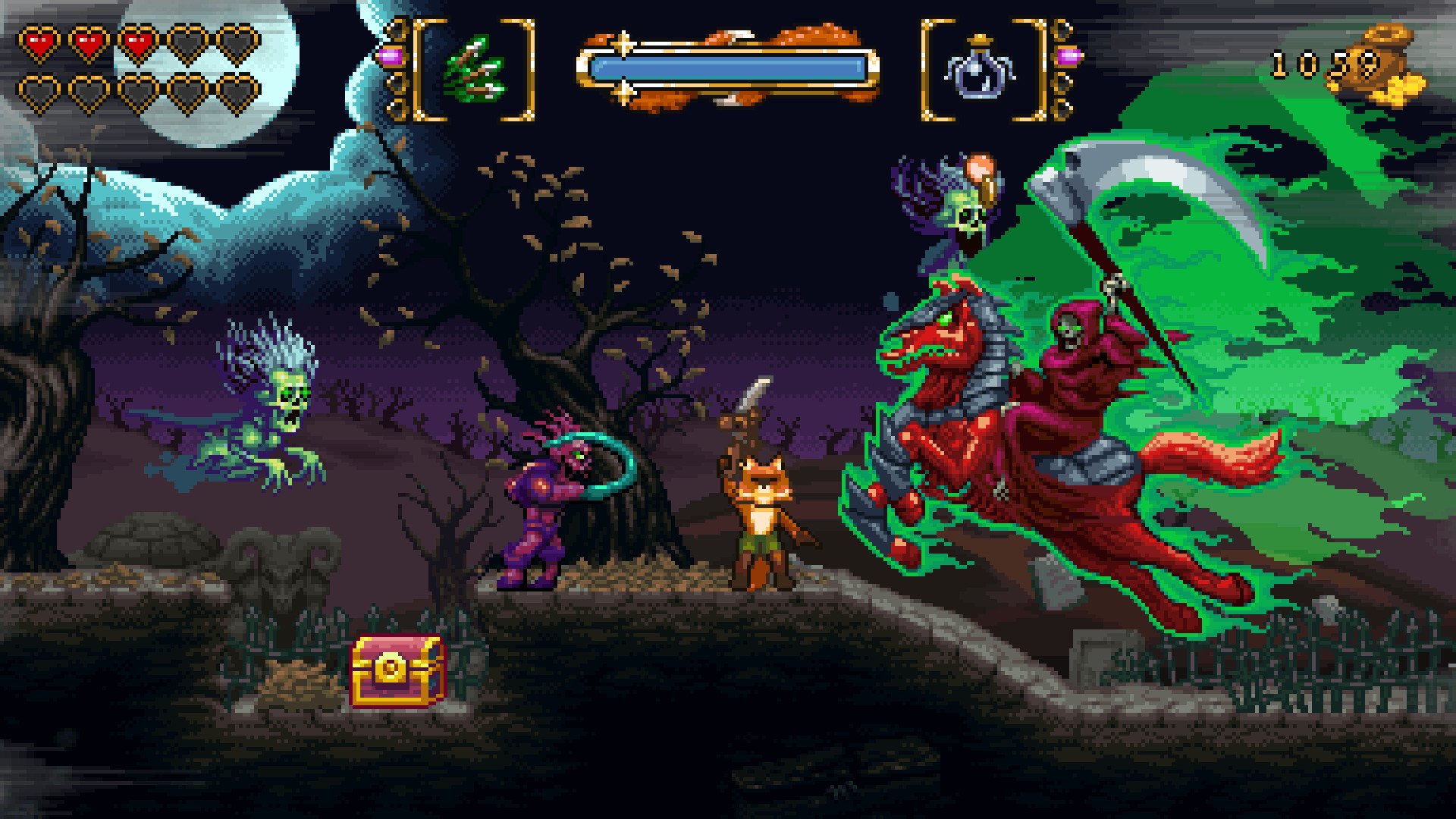 Fox n Forests is a great game, but does wind up being slotted a bit below something like Shovel Knight. The core platforming and action-oriented combat work well, as does the seasonal shifting mechanic. There’s a natural flow to the levels and exploration is rewarded — resulting in stages that are usually fun to play through again. The RPG mechanics are a bit too girnd-heavy for a platformer, but allow you to extend your skills beyond most games in the genre while the rich graphics and robust sound deliver a satisfying experience for the eyes and ears.