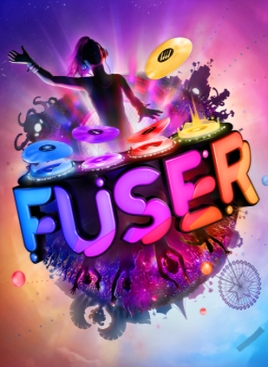 Do you remember music festivals? They existed back in the before times, where thousands of people would gather in one place to listen to some of the biggest and best musicians as they performed. Harmonix remembers them, and being the most prominent rhythm game developer out there, they’re in the best position to deliver some sort of virtual festival in a game format. Or the parts of the festivals that focus on DJs and dance music, anyway, as is the case with Fuser. Here, players are given a never-ending party, performing in front of a giant virtual crowd and crafting various dance mixes for them. It’s a bold attempt to bring such an experience hope, but is the show that it delivers still worth attending?

Unsurprisingly, Fuser doesn’t exactly have any complex plot at the center of it all. You’re just an aspiring DJ, traveling from festival to festival, working with the biggest (fictional) names in the business in order to hopefully become the best. The basic concept behind the gameplay required to get there is also easy to comprehend, at least at first. Just drop down some records to add parts of different songs to the mix as the music plays, making sure to time them perfectly and fit in the crowd’s requests if possible. And once you’ve unlocked enough music, you can take a crate of two dozen songs and create your own freestyle mix to share with others.

If some of these elements sound familiar, that’s because Fuser shares a good chunk of its DNA with DropMix, Harmonix’s last major rhythm game. Weirdly enough, when I brought this up with some of the folks from Harmonix back at PAX East, they tried to downplay this connection, despite being painfully obvious. There’s the central idea of dropping new tracks down onto various areas, the same colored instrument symbols, the same fictional artists like Danny Humbles and Bignums for Harmonix-created songs, plus they even straight up re-use artwork from several of the cards in the menus and clothing. For all intents and purposes, Fuser may as well be a sequel or some sort of version that doesn’t require a peripheral. 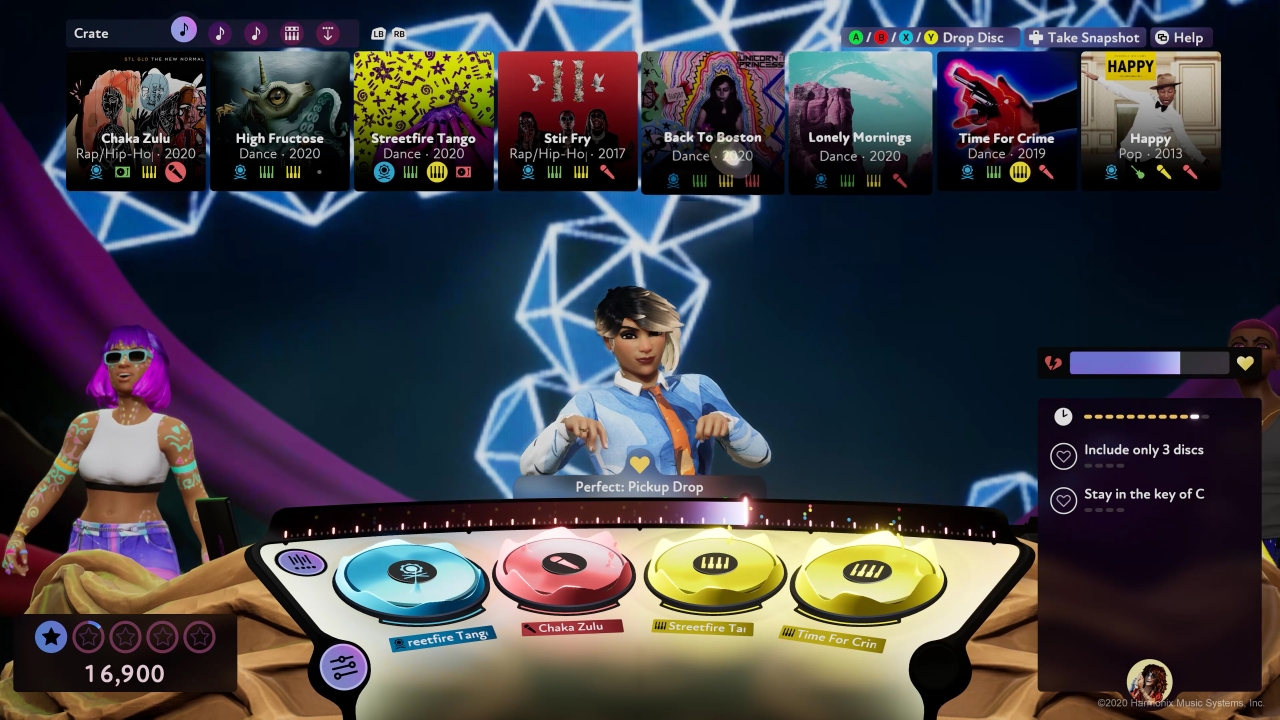 Not that there’s anything with continuing DropMix’s formula, mind you. After all, crafting music there was fun and here the process is ramped up in several ways. For one, we now have full-on visuals to accompany the music, with elaborate and colorful stages that you can customize in various ways, as well a character creator that isn’t the most robust, but still allows for some cool avatars. In addition, there are now several effects to work with, instruments to play, ways to change the key, tempo and BPM on the fly, the ability to cue up songs to play and swap, and more. It can be a little overwhelming (I honestly haven’t used a large amount of effects and instruments in my mixes), but it’s a blast with a lot of variety for would-be DJs to experiment with.

Of course, you need to learn the ropes when it comes to all of this, which is what the campaign is for. As you progress through it, you’ll receive the ins and outs what it comes to various techniques, strategies and effects, working with a specific set of songs in each stage that you can add to. So it basically serves as the tutorial…but in a good way and a bad way. Being able to master the timing and learning how to drop records on the downbeat and pickups while handling crowd requests and bonus objectives is fun, but only when there’s a time limit to work with. Too often each stage grinds to a halt in order to have you set up specific songs or try out a new instrument, even if you’re several festivals in and have everything pretty much down at that point. Too often, the momentum just gets killed.

The campaign is fine, but the real meat is in the freestyle mode, where you can work on different mixes via the songs from your customizable crate (new songs unlocked by leveling up and gaining currency in various modes). Again, it’s similar to DropMix, but there’s something about Fuser’s freestyle mode that feels more special. Part of it is that you have more tools to work with, but where DropMix only has a quick loop of five different tracks, Fuser gives you up to two minutes with an entire mix, and allows you to edit, drop or swap songs, and play around with things in general. The creation process here encourages sudden improvisation, which results in a lot for fun as you try coming up with the perfect sounds on the fly and then fine-tune them. While there are frequent social challenges to also work with as well, the features such as being able to browse or rate other mixes aren’t active yet, but it should be interesting to see how they go. 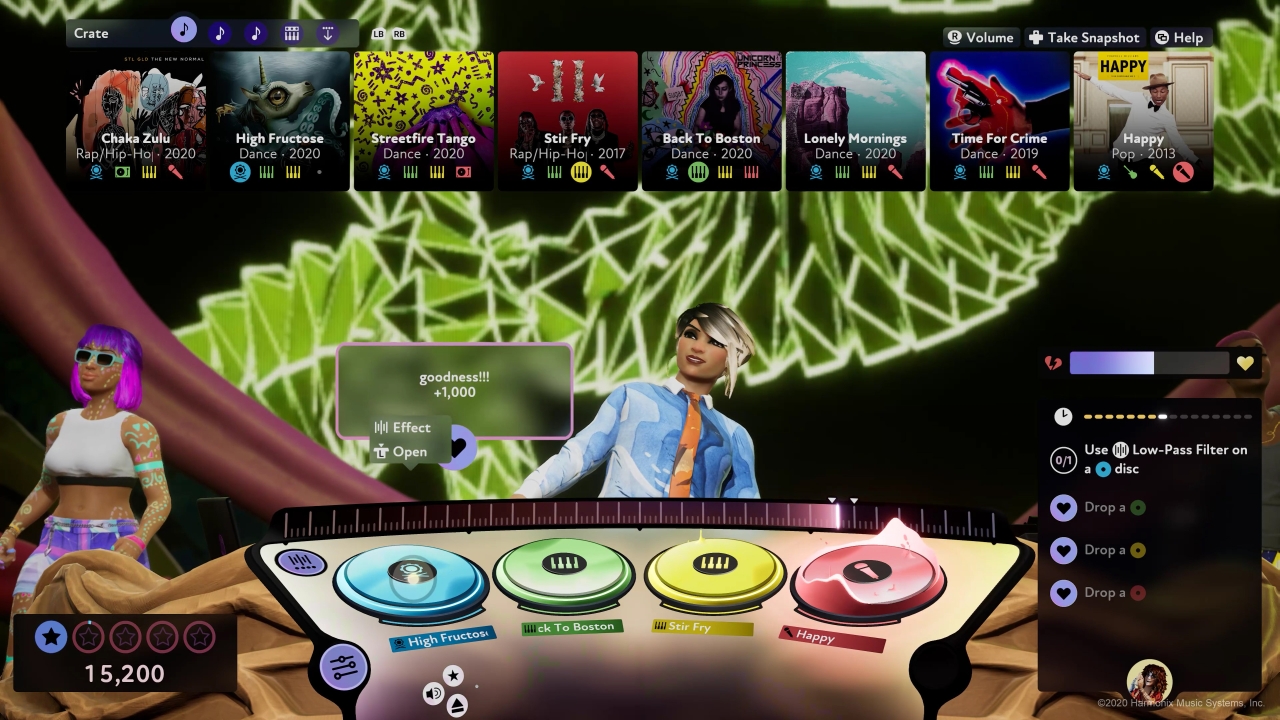 Finally, there are the battles, the game’s head-to-head versus mode, which are not as impressive as I had hoped. Basically, the goal is to deplete your opponent’s health by dropping tracks and getting bonuses for timing and matching requests, with successful drops allowing you to knock off the tracks your rival placed. It just doesn’t seem as satisfying when compared to the freestyle mode (not helping is that you have to win a certain amount of matches before you can even bring in your own song selections), because unlike there, it doesn’t feel like the goal is to create the best-sounding jam that wins the audience over or anything, but rather to just drop a track that gets you the highest number. Were any of the tunes that came out of this appearing at an actual concert, I think I’d actually walk out.

Thankfully, though, it’s still easy to create something that sounds incredible. Much like with DropMix, everything in Fuser is fine-tuned so that virtually any combination of instruments from any combination of songs can flow together perfectly…though it’s kind of hindered by the actual soundtrack. It’s not a bad soundtrack by any means, just more…uninspired. Yes, forgive my inner music snob, and I get that the game is meant to appeal to a wide variety of players and that we’re supposed to mainly uses bits and pieces from them, but it just doesn’t feel like much effort went into crafting a deep and stellar soundtrack. “All Star?” “In Da Club?” “Call Me Maybe?” Freaking “Dragostea Din Tei?” It feels like it focuses too much on Top 40 and more “viral-worthy” stuff. It comes across less like the selection at a club and more like selection from your local small-town radio station. Honestly, the Just Dance games have a better selection.

There are a few notable cuts here and there — can’t resist Basement Jaxx, Eric B. & Rakim, Rüfüs Du Sol or even the frigging Pixies (also, I should note that I was given the VIP edition, which included the first twenty-five DLC tracks) — but there was a lot of content that felt groan-worthy in various ways. And dear lord, can we please get rid of the country songs already? Yes, again, I realize the importance in including a wide variety of genres, but rarely did any significant parts of those songs ever sound like they fit in when combined with more dance-oriented tunes. I know I said virtually any combination of songs can work, but I don’t think Shania Twain’s “Any Man of Mine” worked once. And really, does anyone seriously ever request any Brad Paisley or Glen Campbell in a dance setlist? Before we end, one last note: I tried both the Xbox One and PC versions of Fuser, and greatly recommend the PC version. The Xbox version is fine, but it became clear that this was designed for PC, given that every action utilizes a cursor. Throw in awkward menu navigation and the need to be quick given the reliance on timing, and I can say hands down that the PC route is the best one right now. 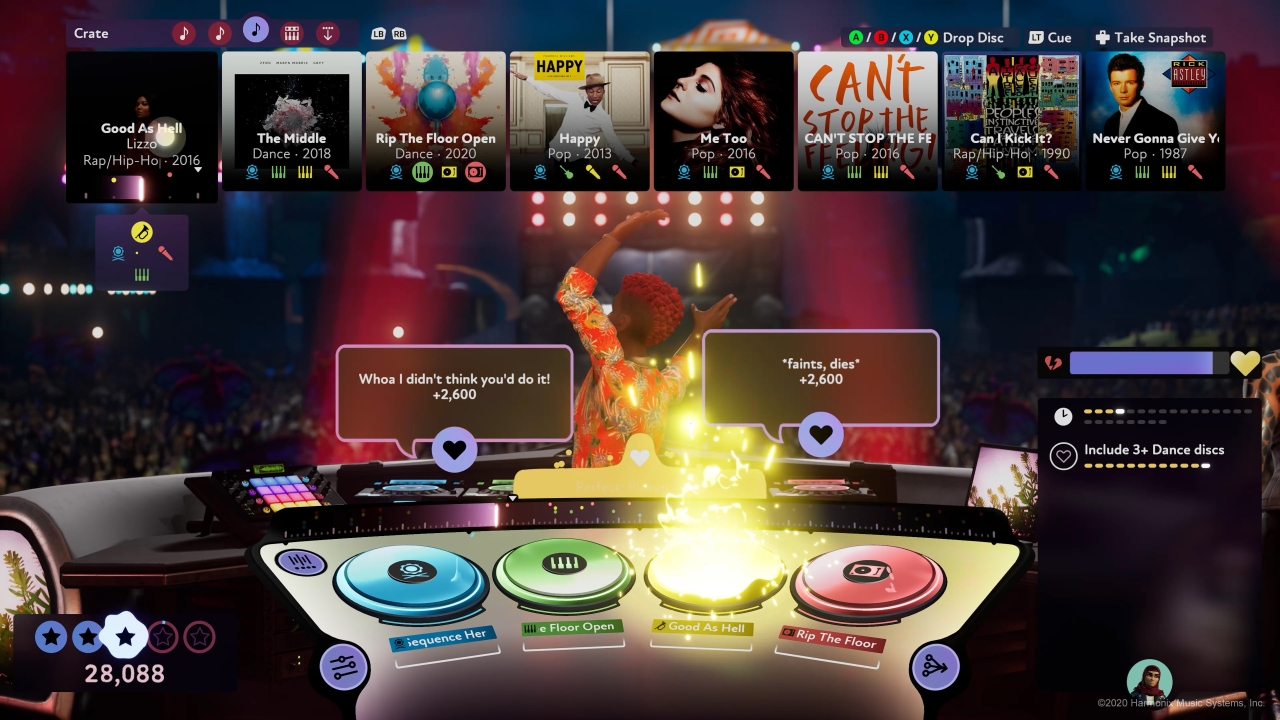 Arguably and oddly enough, Fuser is at its best when it focuses more on creating music and less on being a traditional rhythm game. The campaign mode is fine, but suffers from pacing issues and too much hand-holding, while online battles are underwhelming. But the joy in crafting that perfect dance mix, even if it’s a short one, is satisfying. Amateurs and pros alike will have a ton of fun figuring out the perfect recipe for success or just seeing where their instincts take them. It may not be Harmonix’s best work, but it still makes for one entertaining performance overall.