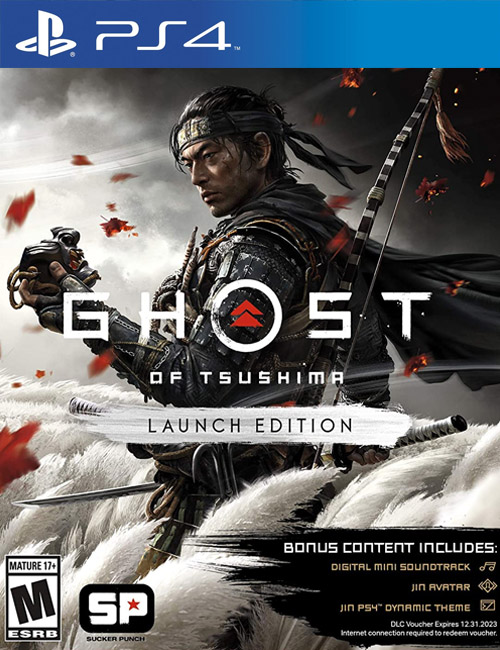 Best known for the Infamous and Sly Cooper franchises, Sucker Punch Productions has dramatically moved out their comfort zone and entered a more gruesome and foreign territory. The Bellevue-based studio has traveled back in time to the 1200s to give us a dramatized history lesson when the Mongolian forces began their conquest of Japan which, spoilers, did not end well for them. You will be tasked to take up the sword and protect the island of Tsushima in a tale of redemption and preservation. Taking influence from famed filmmaker Akira Kurosawa, to the point where there’s a mode specifically built to resemble his classic films, Ghost of Tsushima delves into the honor and struggle a samurai goes through to uphold their values. Can Sony hit it out the park two months in a row or was Sucker Punch’s venture into the east in vain?

You play as Jin Sakai, a young Samurai in a noble family whose past still haunts him, but more than anything just wants to make his uncle proud. Ghost of Tsushima kicks things off immediately as the Mongols are invading the coast of the island, with their goal back in the thirteenth century being to conquer all of Asia. Unfortunately for the residents of Tsushima, the Mongols are a vicious force that goes against everything the warriors of Japan stand for, namely to win by any means necessary, even if it means using cheap tricks. The story delves deep into how far someone is willing to go for the people they care about, even if it means breaking their morals. While there’s various means of disposing your enemies, it continuously discourages you, especially early on, to use stealth as it’s not an honorable thing to do. In the samurai code, if you mean to take someone’s life, you must do so in the most direct way possible, looking them in the eye and not stabbing them in the back. As we witness the atrocities the Mongol invaders inflict on Tsushima, Jin’s perspective of how to save his people begins to shift. Jin develops far more than we thought he would; as a character he’s stoic, but it’s clear he’s an emotional individual. The story itself is well told with strong themes and charismatic characters, although the writing is unremarkable. Each scenario may be exhilarating, but the dialogue itself is boilerplate and does little to expand this foreign tale into something more. Regardless, there was never a moment through the story we did not enjoy, from the brutal travesties to the tear-jerking fallouts of Jin’s actions. 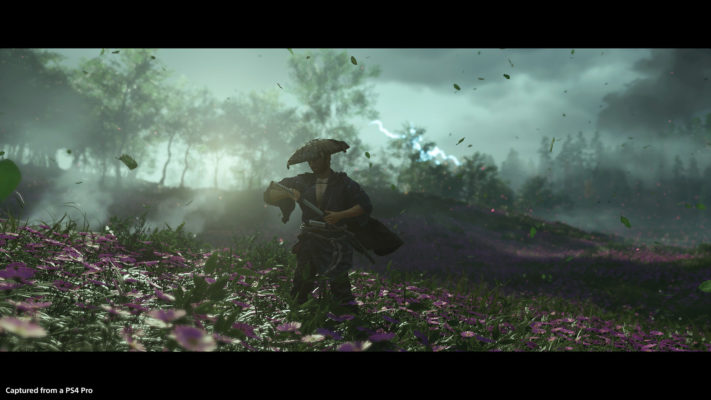 Surprisingly, there’s few actual story missions in Ghost of Tsushima. There are three acts, but each only has a handful missions to get through before moving forward. Fortunately, Sucker Punch has put an emphasis on quality over quantity as each is roughly half an hour to an hour in length (minus a couple one offs near the end) and they come with some of the most intense scenarios that will have you enthralled all the way through. But like any open world game, the vast majority of the experience is about exploring the island itself and uncovering the various side missions and characters it has to offer. It took us a little over thirty hours to complete the campaign, with doing all of the character-specific side quests and partaking in roughly half of the side activities. These include bamboo cutting mini-games that will bolster your Resolve (essentially your regenerating health items), finding Inari Shrines to increase your Charm slots, and locating onsens to reflect on the events and increase your health, among various others. There are also Mystic quests, which are longer side missions that will take you flashy adventures and grant you unique abilities. Tsushima is brimming with life, with so much to see and do, even though it somewhat falls into the standard open world tropes like clearing out bandits and Mongol strongholds, and looting various upgrade materials.

Unsheathe your blade as Jin’s skills are put to the test in a surprising deep combat system. This is an action oriented title that also deals with a heavy stealth component — the best comparison would be to Assassin’s Creed, but it’s is a little more complicated than that. While you’re not allowed to swap out your blade and knife, you’ll be able to unlock various fighting stances that best complement each of the enemy types, such as shield users, spear wielders and brutes. There’s a level of strategy that goes into each fight where you have to utilize not only your stances but your diverse weaponry, be it throwing Kunai to damage and disorient, or sticky bombs to cause knockback in a large radius. The latter comes in handy during those Mongol strongholds when things go sideways. This can be a challenging game, as a single combo can take Jin down if not careful; it may not be on the level of Dark Souls, but it’s no cakewalk either. While the world itself is ripe for exploration, it’s the gratifying combat that will keep you engaged. As someone who generally gravitates towards a stealthy approach, I almost felt it more enticing to go head on with enemies, although this is primarily because sneaking around isn’t the best it could be. It’s not bad by any means, there just doesn’t seem to be as many mechanics as you might expect, such as hiding bodies. It’s simply concealing yourself in high grass and keeping out of sight. You still can do silent assassinations and chain attacks, all upgraded through the extensive skill tree, but I didn’t find it as satisfying as taking them down in brutal combat — at least for most enemies. Even coming up on a patrol, I never found myself bored of battle as each encounter feels different enough to keep players interested. 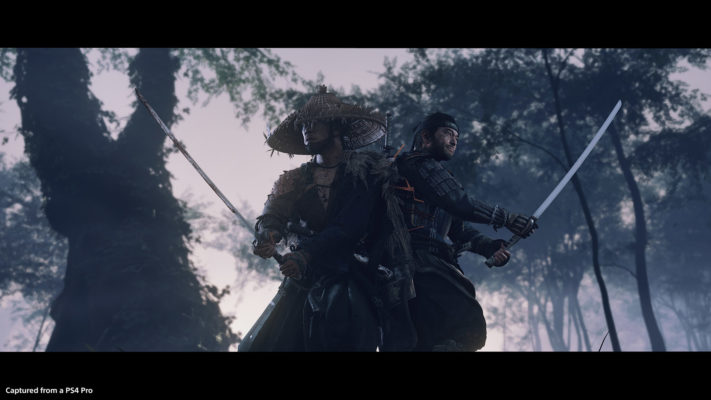 While combat is engaging, the traversal mechanics leaves much to be desired. They’re not unusable, but they’re clumsy, maybe more in line with early Assassin’s Creed titles. The problem is Jin more times than not refuses to get off of ledges or beams, whereas his horse has no trouble jumping down cliffs. The grappling hook makes traversal a lot smoother and lining up various jumps will make you feel like a ninja, but there are times when the hook will not connect correctly and you’ll plummet to your death or alert enemies in the area. Outside of main missions, there are numerous shrines scattered around Tsushima that involve intricate climbing puzzles, and when they work they work well, but these issues weigh them down. Fortunately, Ghost of Tsushima has one of, if not the best, navigation systems when it comes to directing you where to go. You literally follow the wind; you’re not looking at some obstructive arrows, but instead the nature around you as grass and trees will blow in the direction you need to go. It’s such a subtle but effective animation that immerses you in the world even more.

After The Last of Us Part II, we’re a little spoiled in terms of visuals, and while Ghost of Tsushima isn’t as impressive from a technical standpoint, its artistic values are majestic. The island of Tsushima has been painstakingly recreated to be beyond gorgeous, especially for an open world game that rarely skimps on details. There’s a multitude of colors Tsushima has to offer, not to mention the traditional architecture of temples and castles. Overlooking the island from a cliff on a clear day to riding through a bamboo forest as thunder strikes all around you, there’s an incredible amount of variety to see. With that said, some of the lighting effects can be a little overpowering at times, even blinding where you have trouble fighting the enemies around you. Thankfully, these are less frequent than the vistas of flowers, rice fields and autumn forests. Sucker Punch has also stepped up their game with both visual and audio cues, with birds and foxes being bright enough to see and directing you in certain directions with their calls. That’s on top of their musical scores that use appropriate Japanese instruments. I would have liked to have seen more music in the world itself as the set pieces and story content is where it shines the brightest, unlike most of the other activities which are quiet. Regardless, they perfectly aid the emotional and impactful scenes.

Ghost of Tsushima is one of the few games this generation that left a momentous impression on me. This is an original, impactful, beautiful and deep game, but most importantly, it’s just downright fun. Even with so few main story quests, Sucker Punch Productions focused on quality over quantity, ensuring every second is spent on something to savor. Jin Sakai as the protagonist goes through numerous arcs that build and evolve his character as a stoic samurai whose views are closed minded into a more relatable individual. This is on top of a remarkably enjoyable combat system and world that will take your breath away. There are aspects of it that could have been better polished or improved upon, such as the script, traversal controls and stealth mechanics, but the package as a whole is one to remember. With a new console on the horizon, Sony is sending the PlayStation 4 off with a phenomenal lineup for 2020, as Ghost of Tsushima is without a doubt Sucker Punch’s best game to date and a perfect tribute to old school Samurai flicks.