Girls’ Fashion Shoot is a game about dressing up a girl in pretty outfits posing for pretty pictures that you can put pretty stickers on and I hate the fact you made me write that sentence. The game starts and asks you for your name and birthdate, presumably because this is actually a surveillance system and if you enter a male name over a certain age an alarm triggers and the cops break down your door. Luckily, I was on to their tricks and named the player avatar/model “Stevie Hanley”. I figured the police kicking down my Editor-in-Chief’s door would almost make up for the fact that he sent me this game to review, so I felt no remorse for my actions. I would’ve spelled his last name correctly, but Girls’ Fashion Shoot only lets you use names of six characters or less, because any girl with a name more than two syllables long is obviously too grotesque to be exposed to direct sunlight. Sorry Jennifer, you’re Jenny now. Cassandra? Sandy. Gertrude? Get the hell out of here. Your name is too ugly to be recognized by this software.

You then have to pick your favorite style, and I realized I was vastly unqualified for the game. The options start off boring, and if you select “casual” I’m pretty sure some snobby girl will show up on the 3DS and tell you that you can’t sit at her lunch table. But they get weirdly specific, allowing you to select bohemian, marine, or something called BCBG. I didn’t even know what this was, so I Googled it and found it stood for beau cadre, bon gout, which is French for “good class, good taste”. It isn’t too often that I play a game designed for someone a third of my age and yet still be too stupid to understand the French it is using. I selected marine, because I erroneously thought it meant the branch of the military and was hoping I’d trigger the hidden FPS mode. My choice seemed to affect nothing at all in the entire game, so the three minutes I spent trying to figure out what the options meant was somehow an even worse waste of time than what the game typically provides. 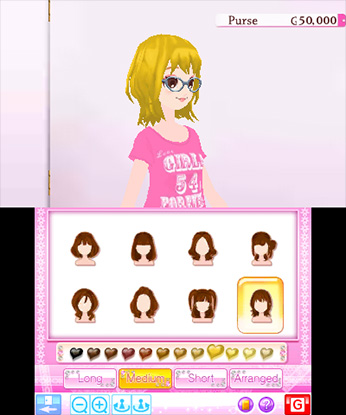 The core of Girls’ Fashion Shoot is essentially a dress up game with an absolutely insipid story to link the little fashion shoots together, but then again perhaps a grown man is not the best individual to assess the story of a game clearly meant for someone of the other gender and half his age and suffering from a head injury. You get hired by some modeling agency, and make friends with other models along the way. Nothing can prepare you for the twist ending though, when you find out *spoilers* Bruce Willis was Keyser Soze’s sled Rosebud all along. Or something like that I think. My brain absolutely refused to stick around for the entire experience and leaked through my nose when I started trying to figure out which set of animal ears best completed an outfit I was working on. Of course, you aren’t playing this game for the story (because if you like it you most likely aren’t even literate), and all the fun comes from dressing your avatar up in pretty outfits and taking her picture. As soon as you get hired by the modeling agency, your manager has you take up specific jobs where your outfit must match the look they need for the theme.

For my first job I needed to come up with a sporty and active outfit, and in a desperate attempt to get fired and complete the game early, selected a pink dress, rabbit ears and red high heals. Nothing says sporty like rabbit ears, right? Well, turns out my manager was an idiot and loved the idea, probably because it so closely resembles WNBA uniforms. You then have to pose for your photo on the cover of a magazine, because models also are usually responsible for the design layout of magazine covers, right? The results were amazing, as I plastered the entire cover with bat stickers and moved the model off the screen so far that she just became a giant hand that had a black aura glowing around it. Literally. You can put “auras” around your models to make them glow and black is the best and most evil option. I had assumed that after I turned the “sporty” issue of whatever magazine this was into a hellish landscape of bats and evil glowing hands that I would be fired and could stop playing the game, but the game proved to be more evil than I had ever dreamed. It loved my cover. It gave me the maximum amount of money and wanted me to do more jobs. WHAT HAVE I DONE?

The rest of the game plays out almost exactly the same way, and each month you just have a certain number of “jobs” to complete by picking out an appropriate outfit and selecting a pose, and then decorating the photo however you see fit. You could go through and search for outfits that match the keyword, so the game basically comes down to “do you understand when to use Google” as any keyword you search for pulls out all the options that match what you’re looking for. Alternatively, you can just pick whatever the hell you want as the game is awful about failing you. They could be looking for swimwear and you could pick the back end of a horse costume and a top hat and they’d still tell you it wasn’t that bad. All it affects is how much money you get, and you can only use that money to buy other outfits or poses anyway. I became the expert at the looking surprised and pointing to the left pose, and selecting the exact same outfit over and over again still got me the base salary each month. There is just no skill or thought or anything required to progress through this game. There is a nice assortment of outfits I guess, so if you’re into dressing things up with no other sort of goal attached to it, then I guess this is probably the perfect game for you. 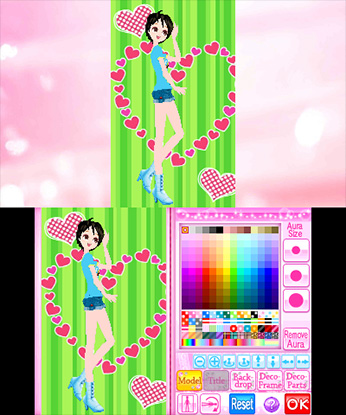 If you are thinking of getting Girls’ Fashion Shoot for your child, then consider this review a warning if you hope to have any future relationship with them. There is absolutely nothing of substance here, and even among 3DS dress up games, Girls’ Fashion Shoot fails to impress. I feel bad even critiquing this though, as clearly I am not meant to be in the target audience of this game. It would be like if I was a food critic who one week thought it would be prudent to review three different kinds of baby food and then have the gall to act surprised when it turned out they all tasted awful. The limited gameplay and absence of any sort of complexity means this is not going to be enjoyed by many 25 year olds, but perhaps a 10 year old girl somewhere might get a kick out of this. Although even if you are a 10 year old girl who is into this sort of thing, you’d be better off purchasing the vastly superior Style Savvy: Trendsetters also for the 3DS, and no I would not like to elaborate on how I know that one is better.