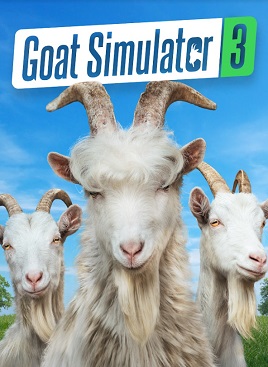 Ten minutes into Goat Simulator 3, I had already incurred the wrath of God for licking the golden Forbidden Fruit. His holy hand smote me with lightning, and the goat writhed in pain. Moving along, my barnyard friend still crackled with energy, but it eventually dissipated. Soon after, I stumbled into a gas station and began exploring, looking for a key for the bathroom door. It was then that I learned that the Holy One wasn’t done with me, His almighty finger striking me down with righteous flames. These flames are not gas station proof, and the entire pump island detonated. This eventually brought a fire truck, which was quickly stolen and taken for a joy ride throughout the farmlands that make up the opening areas of the game. Running down pedestrians and being a whirling agent of chaos, it was obvious that this direct sequel to the original hasn’t lost its touch despite the greater level of polish.

The original Goat Simulator wasn’t supposed to do as well as it did. It was announced as an April Fool’s joke that became real, and Coffee Stain Studios didn’t put much effort in. In fact, the studio famously said that they wouldn’t fix anything in the title that wasn’t game breaking. It was meant to be this silly thing for the player to goof around and have fun. It was never meant to actually gain an audience. Much like the titular goat, though, the title did what it shouldn’t: it gained an audience. In retrospect, this shouldn’t have been surprising. It was a masterclass on what happens when polish isn’t done. Things stretched to horrifying degrees, physics would often give up on life and fling things into the atmosphere, and nothing ever worked as it should. This was instructive to the audience, as it showed things breaking down, while still being entertaining with the density of things to find and try. It was a game made for streaming and spawned too many knockoffs that didn’t understand that there was actual game design underneath the seemingly lazy game development.

This sequel goes a different direction from the original: it’s actually polished. Gone is the horror show of character models bending to terrifying degrees. The physics stay reasonable consistent. There’s predictability to the playground, which alone makes this feel like a new animal. Instead, Coffee Stain placed the focus on exploration and being a jerk, allowing for a whole new kind of fun. Littered all across the larger maps is a litany of quests to undertake, new costume parts, some of which have function, and trophies to find. Plus, there are plenty of secret goals to stumble across, all in the service of upgrading the goat castle. 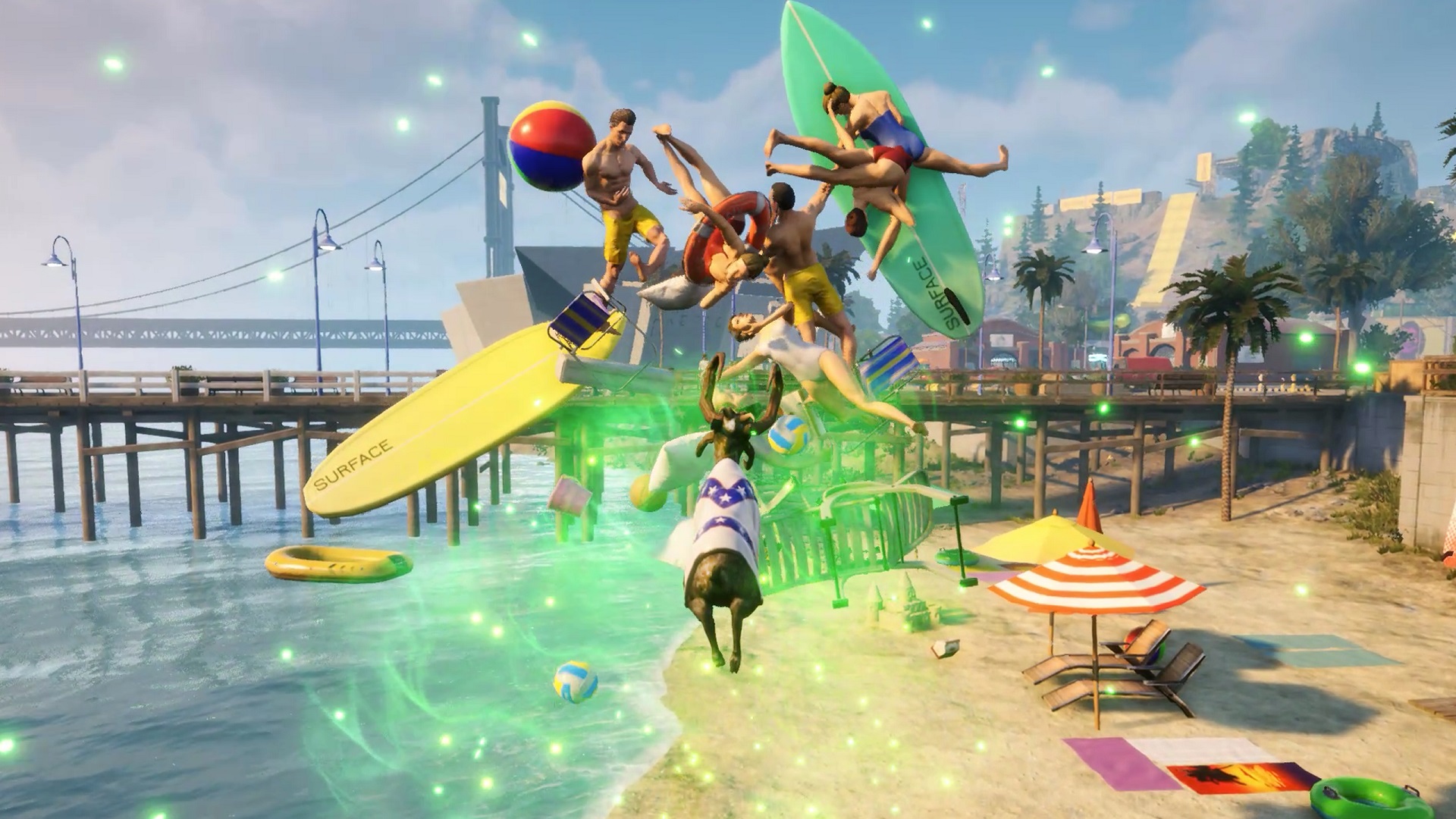 That castle does provide a clear goal to work towards. Completing quests in the world awards Wisdom. Once a new level is reached, the player returns to the castle to receive the reward. Things like a new throne room, customizable statues and new gear can be found doing this. This all leads an actual closing of the story, complete with a boss fight thrown together by an overworked programmer that just cannot believe the lack of patience in the player. Overall, with some light goofing around, the credits will roll about 5-6 hours in. As a goal-oriented player, it was nice to have a clear thing to work towards, but it seems likely that the audience will be more interested in causing havoc.

That havoc is where Goat Simulator 3 is the most fun. An old fart like myself will be reminded of that feeling you first got when playing GTA3 all of twenty years ago. Steal a car and go on a rampage. Or grab a weapon, like a laser beam shooting facemask, and go to town. Knock people into the water. It’s all about being a jerk, except with a button to bleat. Stuff like this works well, allowing for the more destructive nature of the player to take the center stage while maintaining a level of good-natured fun. The goat might be a sociopath, but this isn’t a bloody game. It’s more along the lines of a Looney Tunes cartoon spread across a reasonably-large canvas. 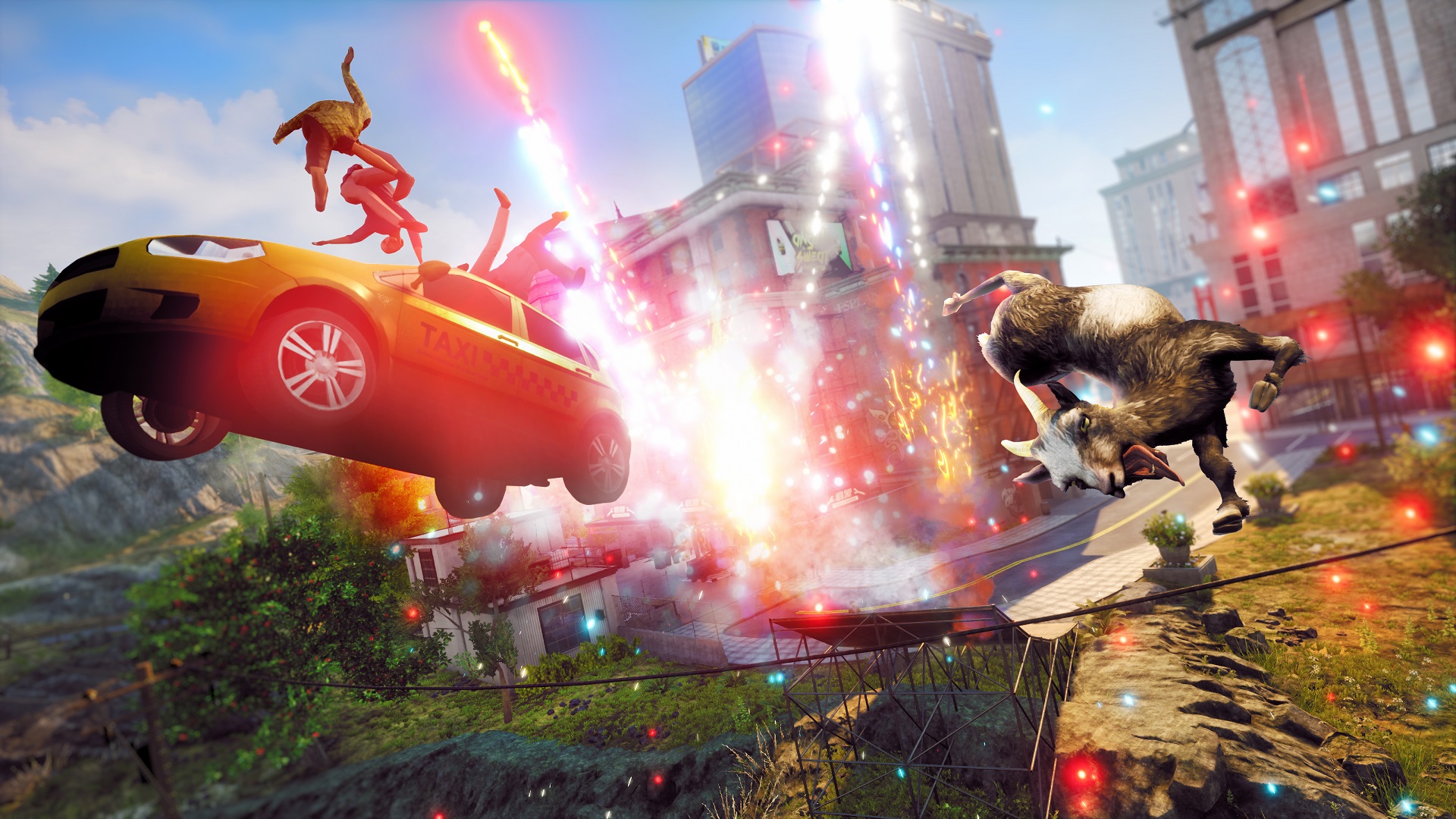 The quests themselves do have their moments, but these can be uneven. Head-butting ballerinas to force them to spin faster, creating a tornado that will persist for all time is silly fun. Finding forty boxes spread across the local area and schlepping them back to a garage is tedious. Truthfully, that last one was only finished because the count of what was completed was still there when I reloaded a save, while the boxes I had brought in respawned to their original locations. Frankly that one would have gotten a pass if I hadn’t noticed that because it was a tedious task. Most of the quests have an additional reward tied to it, though, some of which allows for new things to do and more ways to torment the populace, so leaving things behind isn’t always the best idea.

While this is a title that Coffee Stain wanted to polish, there are a couple of major sticking points. The most egregious is the frame rate drops. Keeping in mind that I tend to be forgiving when something hitches to the teens when a lot of stuff is going on, Goat Simulator 3 blows past my level of patience, dropping to one frame per three seconds at times. This is most noticeable when using the Abominana skin. Note, that this is just using the skin, not even the ability it has, which is shooting bananas at people to turn them into abominanas too. Secondly is that it does not allow pausing. This is a game where friends can meet up and abuse the citizens together, as well as partake in minigames. Not being able to pause when with a friend is understandable. Not during a single player session, though. Under normal circumstances, this isn’t a huge deal. The worst that normally happens is some goat-hating person kicks the crud out of the player while they’re away. Since the goat is invincible, no big deal. During that aforementioned boss fight, however, I needed to pull something out of the oven. The fight kept going and I eventually had to just set the controller down and handle it. When I came back, I was couldn’t figure out what was going on and took a loss. Turns out it was a simple game of hide-and-seek, which wasn’t difficult to parse after the loss, but this shouldn’t be a problem when games could be paused in the 80s. 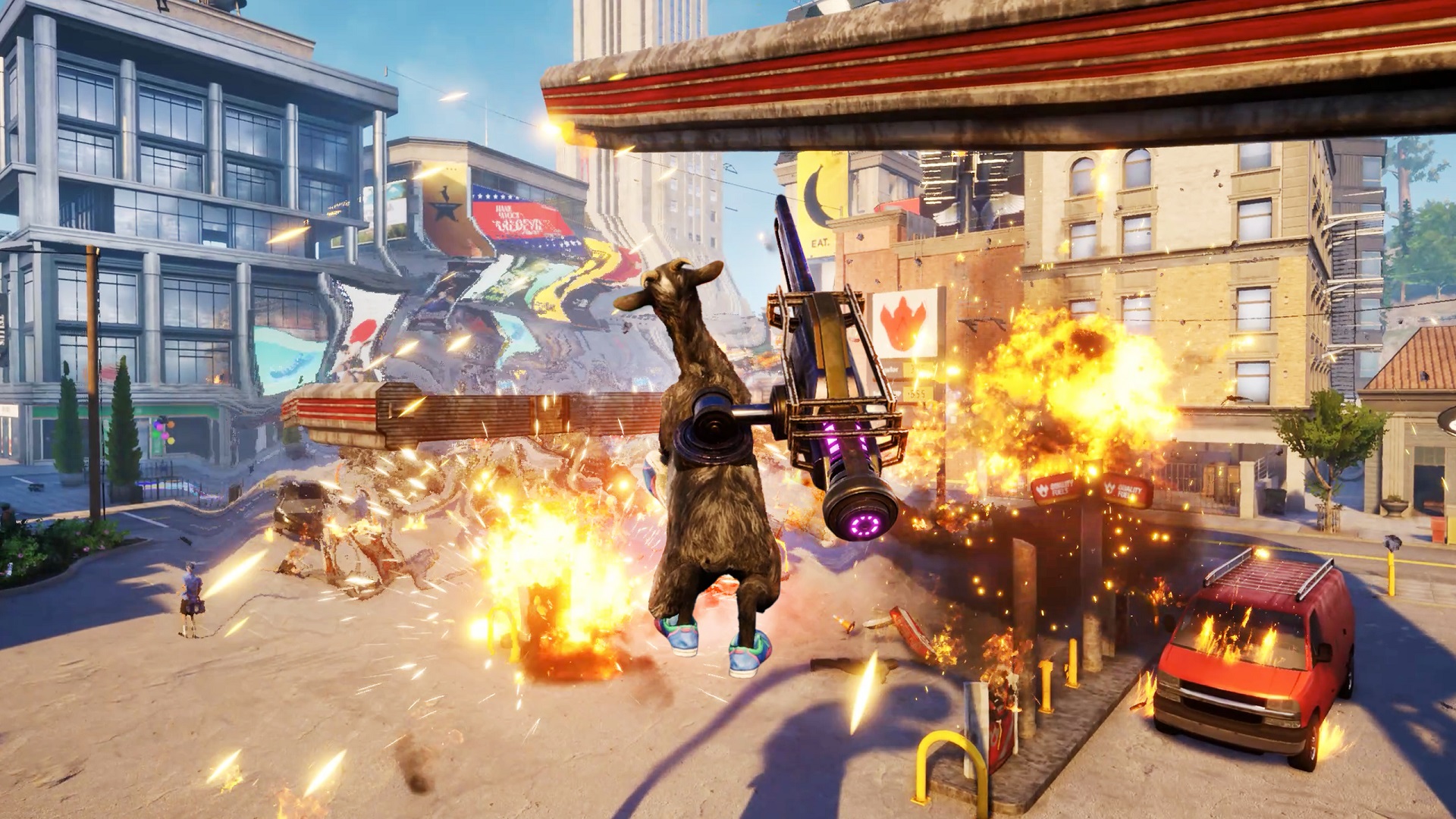 When all is said and done, Goat Simulator 3 is a solid playground to have fun in and just be the worst goat possible. There’s tons of items to find, toys to unwrap and secrets to find. It’s a well-made silly thing to follow up a joke that went too far. Even after the credits roll, it’ll still be fun to try out new ideas to see what will work and what else is hidden. Even as I am writing this, I’ve thought of a couple of things that I’m going to want to do just to see if anything happens. Based on the rest of the game, the answer is probably yes. That alone shows that the spirit of the original has been captured while still being a more complete experience. Even the bugs, and admittedly crusty references, can be ignored when there is just so much fun to be had.