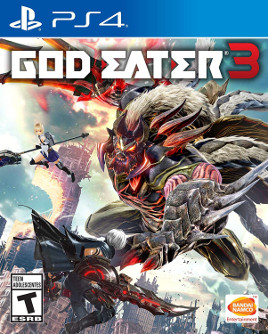 It’s a universally acknowledged truth that a single character in possession of weapons and superhuman combat abilities must be in want of a party to seek out giant monsters and kill them. This has been observed in Toukiden, Monster Hunter and the five previous mainline entries in the God Eater franchise. God Eater 3 will once again have players grabbing their God Arcs and hunting Aragami in a desolate world set half a century or so in the future. Hunting massive creatures is generally an enjoyable pursuit, and with several options out there, the question remains: is God Eater 3 a worthwhile hunt or is this a beast that is better left undisturbed?

God Eater 3 begins with the god eaters as prisoners, using their God Arcs to hunt Aragami and collect resources as a work detail assignment.  The few missions as prisoners serve as a tutorial to how to properly use the God Arcs, Bursts and other general knowledge to successfully fight the Aragami. Once the player has been properly instructed and deemed competent enough at wielding the God Arcs, they end up having an unplanned jailbreak which lands them on the Chrysanthemum caravan with a lady named Hilda, who appears to be a benevolent leader with great access to resources. Hilda works out a deal with the god eaters where clearing out a path for the caravan by reducing the Aragami population becomes a lucrative endeavor for them. The prison cell and Chrysanthemum are both conveniently equipped with the same device where players can select and embark on missions.

A complex and original story is not one of the strong points of God Eater 3. It’s not a bad story and actually works well in progressing the game, but the whole teenage prisoners with special powers who end up working as a sort of heroic mercenary while transporting the savior of humanity feels like something that has been done once or twice before. This carries over into the character development as well. Claire, Hugo, Lulu, Hilda, Phym and so on all fill various archetype roles instead of fully being fleshed out to have memorable identities. As this is an action game above anything else, narration and character development aren’t necessarily the most important things, but with so many cutscenes and conversations needed to advance the game, strengthening these aspects would have been an overall benefit to the experience. 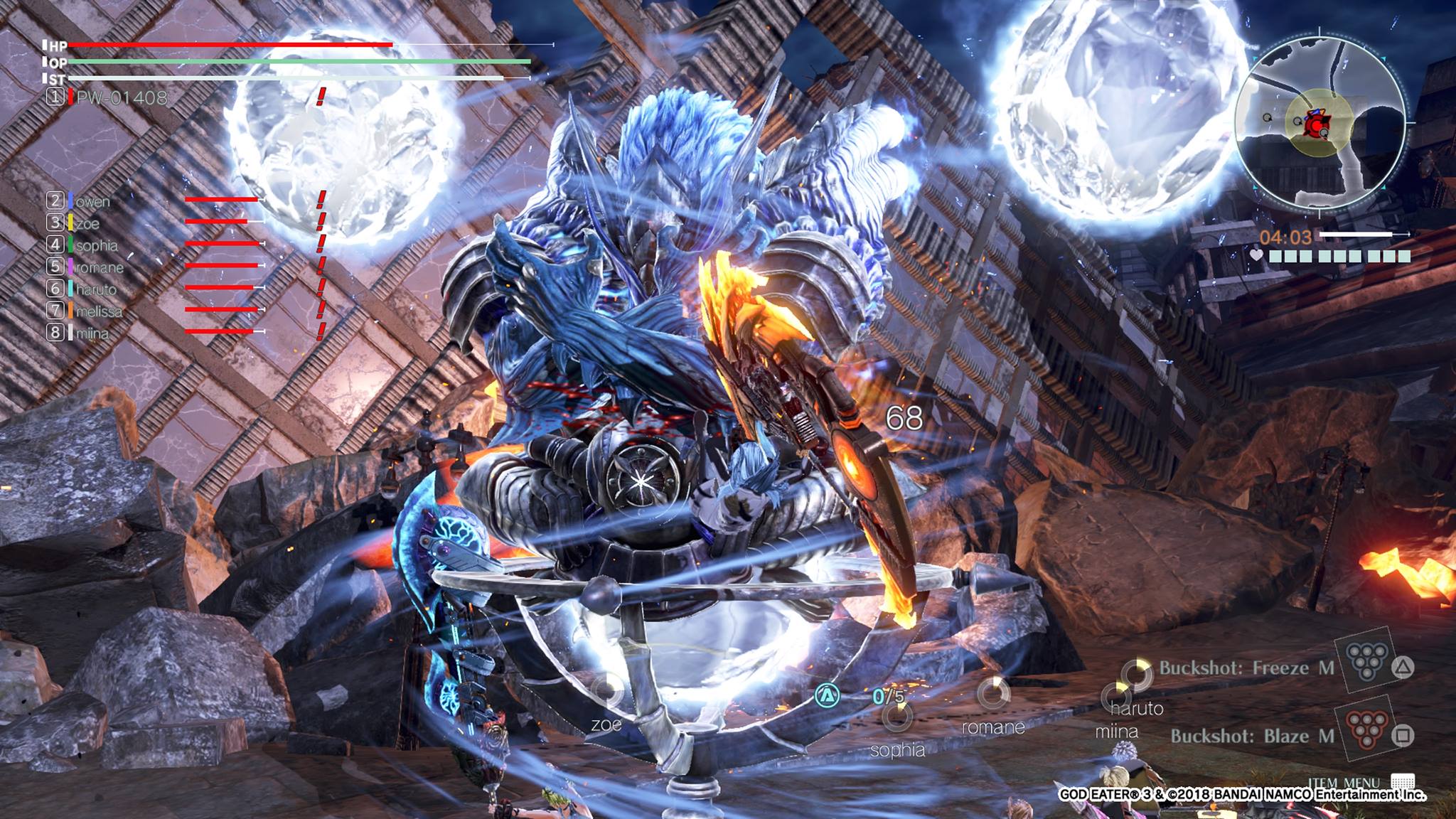 Getting to the action of God Eater 3 is the strong point, with some caveats. The missions are enjoyable for the most part but the overall quality is a bit of a mixed bag. The player selects a mission and goes on an Aragami killing spree with three AI companions or up to three real companions if you prefer gaming with your real friends through the magic of online multiplayer. The missions have a time limit, typically forty minutes, but missions taking over ten minutes to complete are extremely rare and won’t be encountered in the first few hours. The mission objectives are typically kill all the Aragami in an area or kill a specific big Aramagi that is especially nasty and will take several minutes.

Missions are short; in the first 25 missions only one got close to lasting ten minutes. This is good since this means if you only have a half hour to play, you can knock out a couple missions and feel like you’ve accomplished something, but most of these don’t feel like they have a whole lot of depth to them. After the story progresses to a certain point early on it seems just about every mission is kill some small Aragami and then a larger Aragami will appear. After fighting the Aragami for a few minutes it will retreat to the feeding grounds to heal, which is the time for the player to track it down and finish it off. After playing a few missions consecutively, the enjoyment quickly turns into strict repetition. 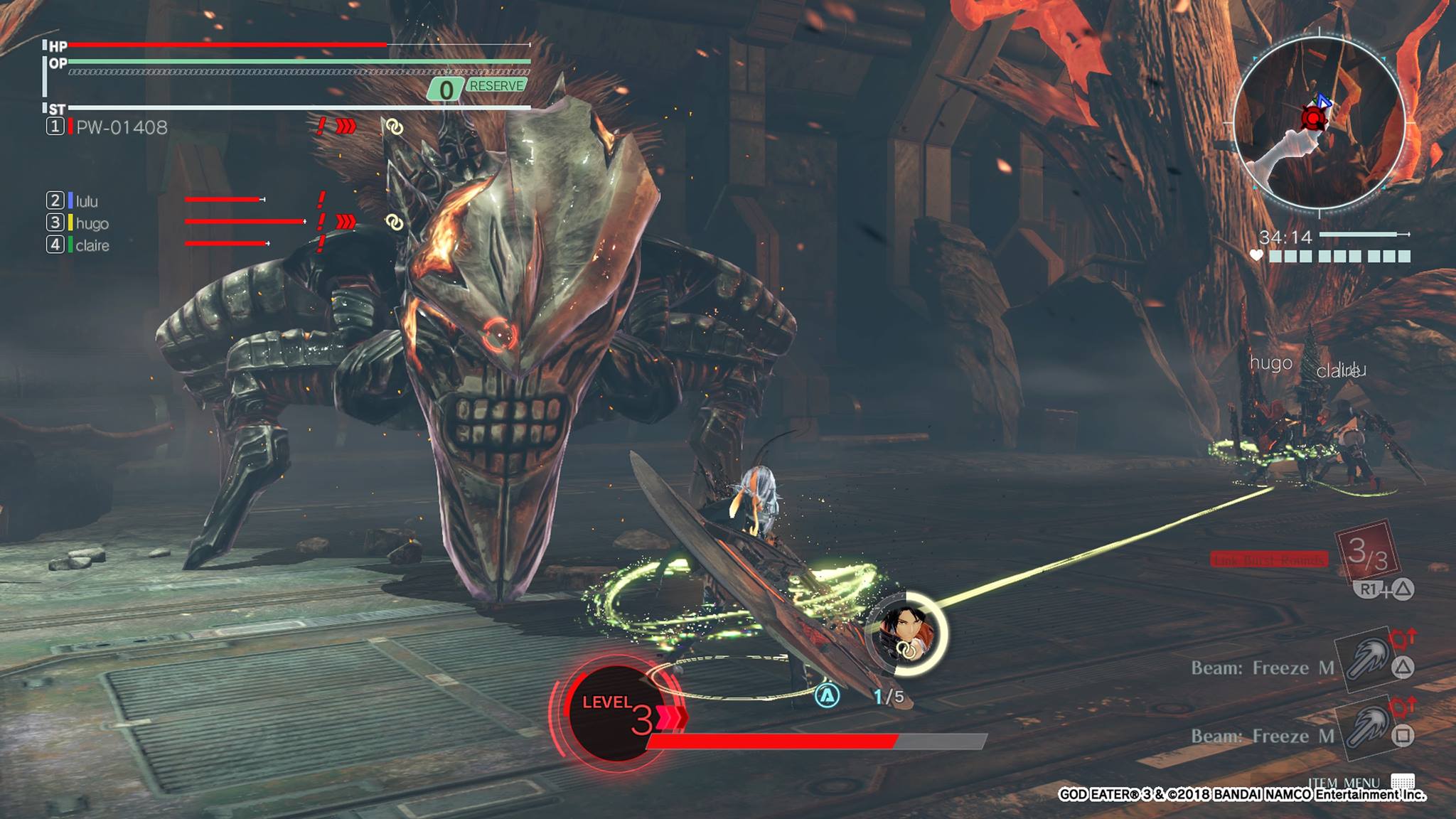 The God Arcs are cool weapons that can take on the form of a melee weapon, shield or firearm, and there are plenty of variations of all these forms. Sniper rifles or shotguns, bucklers or tower shields and a wide variety of weapons that include scythes, swords, daggers and mauls to name a few. The God Arcs can be charged to unleash a devour attack that can deliver heavy damage or pilfer resources from fallen enemies. There are a variety of melee attacks that make the fast-paced combat exciting, but the guns never felt very useful. Their accuracy, range, damage output and high OP consumption just seemed like the player is better sticking to melee. Players can use special burst attacks that gain in power the more often they are used and joining with another character when they reach a joint state of embrace is a nifty feature that emphasizes the importance of team work. Players can give orders to the NPC companions, but during the review they seemed to do just fine if left to their own devices.

God Eater 3 supports online multiplayer which helps add a little spice. Up to four players can play cooperatively in story missions and eight players can take on a massive Ashborn Aragami during the assault missions once they are unlocked. The assault missions are actually more difficult than the main story missions due to their time limit. Ashborn Aragami are extremely powerful and even with double the number of god eaters joining in on the assault, the five minute time limit to kill one of them just isn’t adequate except for the most organized and well equipped teams, though this does lead to a good feeling of accomplishment when victory finally is achieved. 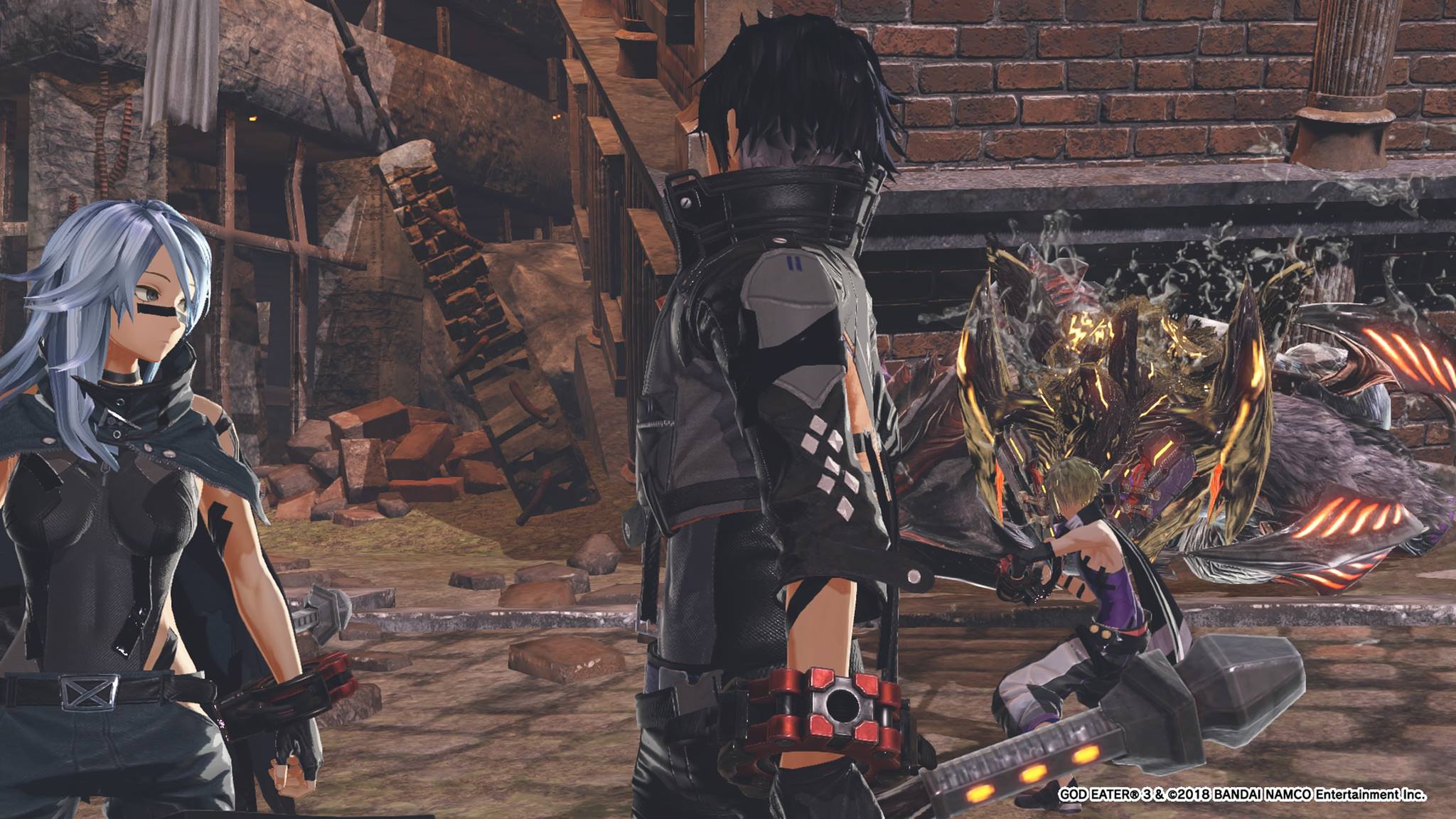 Collecting items to craft and improve equipment is a large part of God Eater 3 and is a rather streamlined process. There are several different weapon types a character’s God Arc can become so after the player figures out their preferred weapon type they can keep using blueprints to build and improve that weapon class. The player’s companions will gain ability points after each battle which can be used to unlock new skills for them such as health regeneration or venomous attacks. Using burst attacks specific to each weapon type will cause them to level up, so there’s some benefit to finding a preferred weapon type and sticking to it.

The graphics aren’t that impressive for 2019 standards. Character designs are rather generic but there are enough interesting Aragami designs to help make up for this. The controls could benefit from some tightening up before launch. Holding R1 and attacking can activate certain attacks, but pressing R1 also changes the God Arc’s form between melee and gun which during the review has led to some situations where the wrong weapon for the situation was equipped. The dash button is also the button used to pick field items, so standing in the exact right spot in essential to acquire the item. The controls aren’t awful, but some tightening could have substantially improved the play mechanics. Something random and strange happened when naming my character. I initially went with Saliphat, one of my go-to review game character names. The game wouldn’t let me do this since it flagged Saliphat as an inappropriate term, so if anyone knows why it would be great to enlighten me. Elleskudt was considered a suitable name, so I don’t know what the rules are for naming God Eater 3 characters. 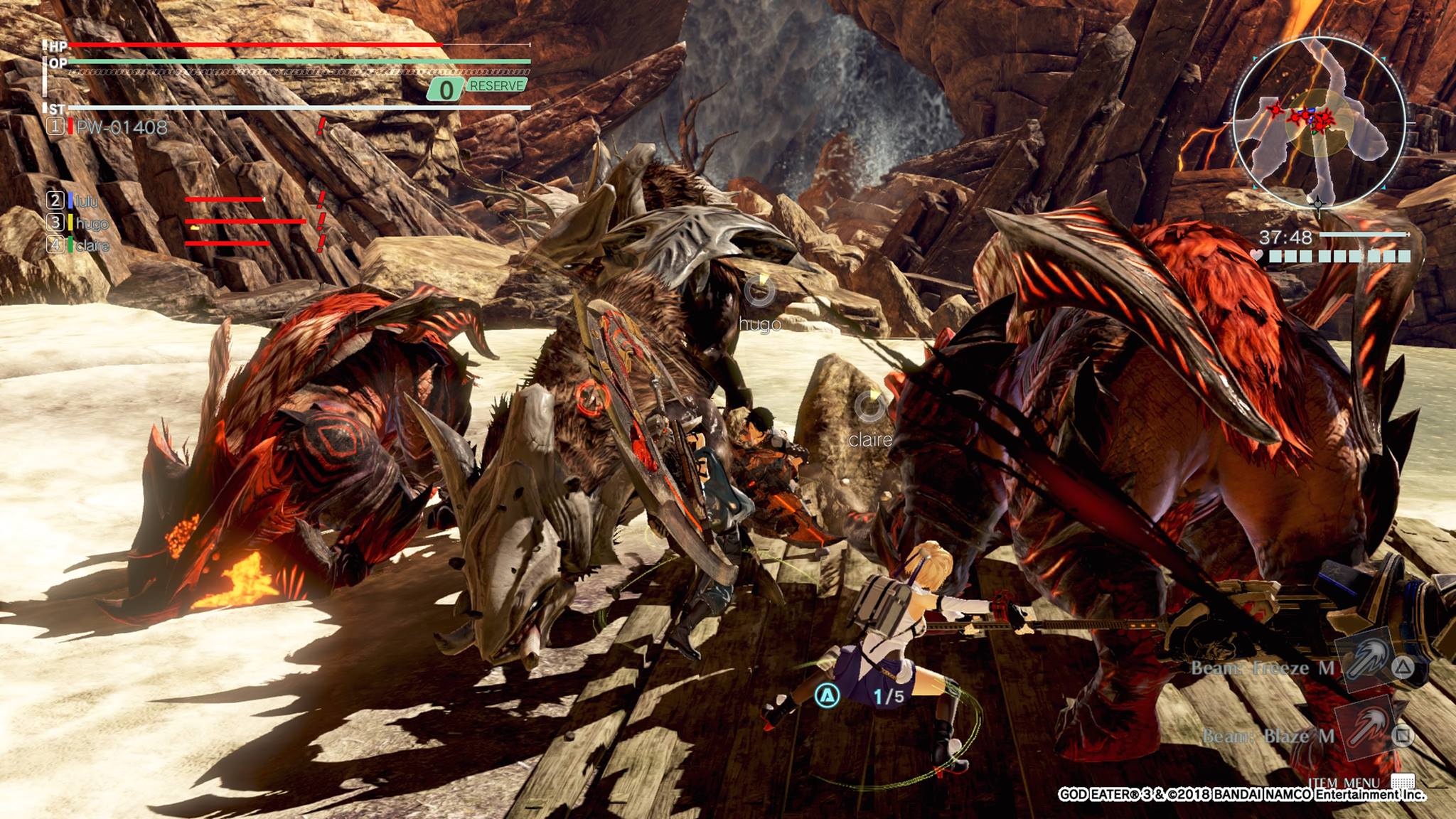 God Eater 3 is a good if unremarkable title in the monster hunting subgenre. This is a game that doesn’t excel in any one area, but none of its shortcomings are damning to the point of ruining an enjoyable experience. There are attempts at giving more depth to combat with the characters engaging each other and having burst attacks, but using these actions strategically doesn’t greatly alter the battle outcome from just button mashing. The repetitive mission structure paired with a story and characters that feel as if they could have been lifted from any number of games prevent this title from being exceptional, but for fans of the genre, there’s a good game hiding beyond these shortcomings.