It takes a big month of releases to make the latest God of War feel like just another game, but with Tomb Raider and Metal Gear Rising: Revengeance debuting just weeks ago, that’s exactly what Ascension feels like. Of course, it doesn’t help that popularity beings to diminish when a series passes its third entry, so even with a great marketing push and some of the most epic set pieces yet, it likely didn’t stand a chance feeling like a must-play event regardless of the current market. That doesn’t mean it’s not a fine game, and as part of the last wave of Sony exclusive titles for the console, it visually exemplifies some of the best the console has to offer. Based purely on gameplay, however, it soon becomes apparent why a great entry in one of the greatest series could be overshadowed by the aforementioned titles.

Taking place years before the original God of War, Ascension sees a Kratos on the edge of defeat pledge an oath with Ares in an attempt to secure victory. Kratos becomes the hand of Ares and ravages through battlefields until he one day commits an act that forces him to break their bond. He quickly becomes imprisoned by the Furies, three queens who are the enforcement of punishment and bane of traitors. The Furies torture Kratos and drive him mad until he eventually breaks free and sets off on a quest to find the truth. While the plot does shed light on various aspects of Kratos’ past, it does so through a disjointed narrative. The series isn’t known for rich storytelling, but it’s at least almost always interesting and coherent. Here, there’s hardly ever a cutscene and the little scrolls scattered throughout add nothing. Those extremely well-versed in the God of War mythology will likely comprehend the gist of what’s going on, but the pacing problems stifle motivation when you’re unsure why you’re battling or where exactly you are. 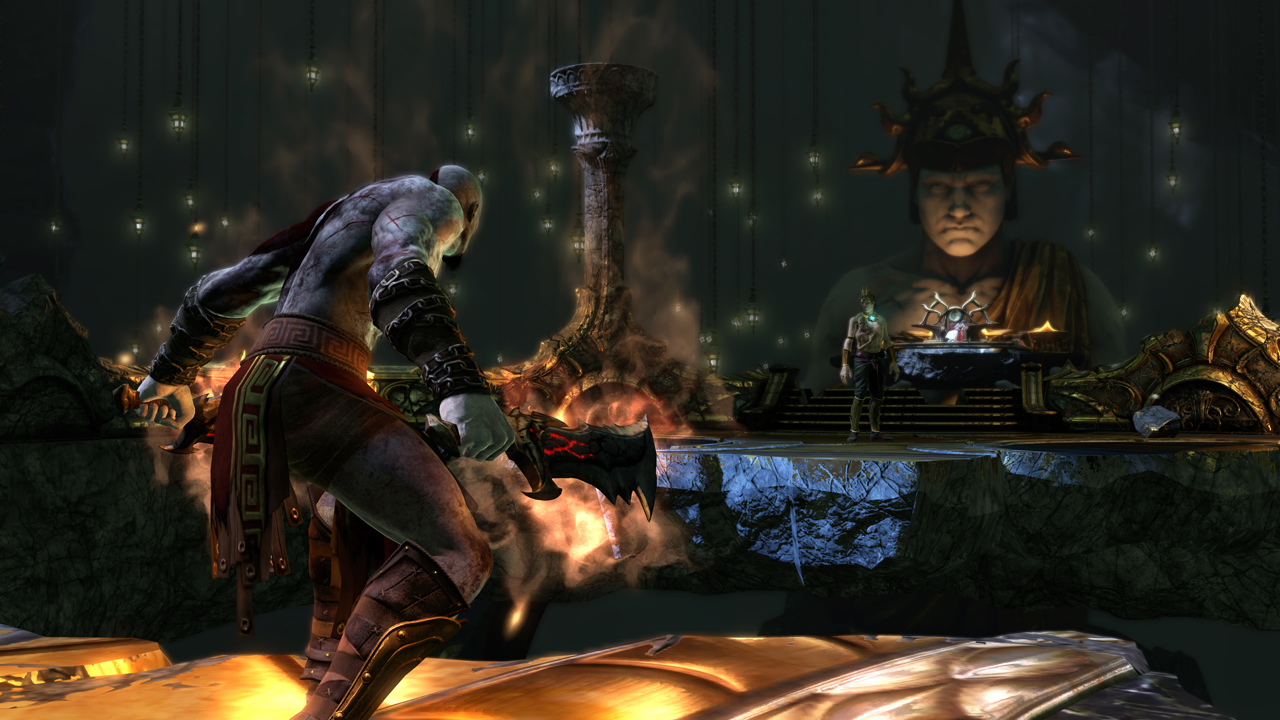 Luckily, the story the environments tell is fall more enthralling. One need not look past the first level to see evidence of this, which takes place inside and around an enormous Hecatonchires. The entire level is alive, with multiple platforms attached to the body of the titan, while its appendages do things like break hallways and elevate them in the air. Eventually, you face off with the environment/creature one on one. While it’s an incredible level design that announces the game’s arrival with a bang, it’s just the first of many beautiful large scale stages to come, with another highlight being enormous mechanical pythons that must be ridden and slid through to turn a giant crank (humorously dubbed “Snakes on a Train” by the trophy). In additIon to the larger than life theatrics, there’s well designed sewers, towns, temples and more to be traverse through featuring some tricky puzzles throughout.

As unique as some of the environments are, it’s a shame that gameplay remains so conventional. As in all of the games, square deals a quick attack and triangle a heavy one. The two can be combined together in multiple ways to form combos and unleash more powerful attacks on your foes. Additionally, there’s blocking, grappling and throwing. If you’ve played one God of War game, you know exactly what to expect here. There’s been a few new additions to combat, with the most notable being the ability to pick up secondary weapons from opponents in a system dubbed “World Weapons” that are mapped to the circle button. Five weapon types are available, including a sword, spear, club, shield and sling. If Kratos doesn’t have a weapon, he attacks with his fist. Additionally, the magic system has been refined to allow weapon types to be changed between fire (Fire of Ares), water (Ice of Poseidon), lightning (Lightning of Zeus) and dark (Soul of Hades). Each one of these has special attacks that are unlocked through red orbs, while some grant special abilities such as breathing underwater. 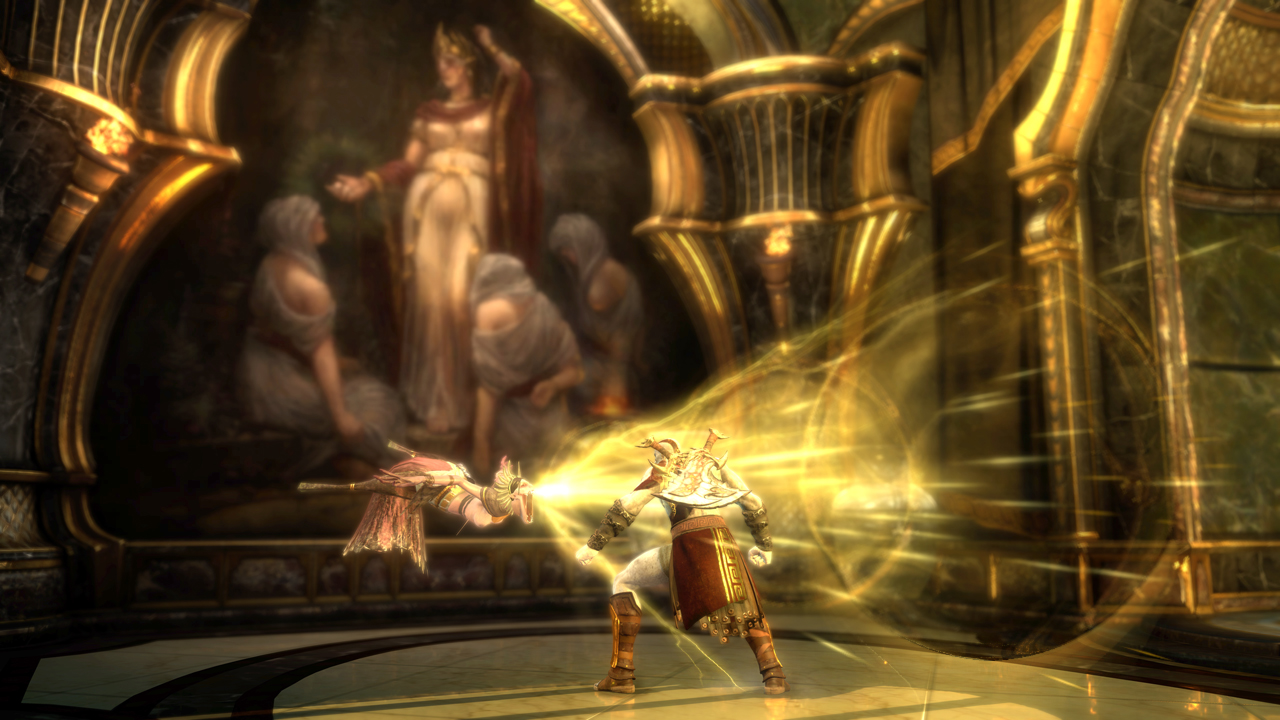 While both of these new additions offer a little more variety, the game still mainly boils to button mashing. Enter a battle, alternate between three buttons and dodge enemy attacks, rinse, repeat. Of course, that’s not to say the gameplay is bad — in fact, it’s quite the opposite. It’s the same the series is known for, but the problem is that this is an eight year old series and we’re nearing the next console generation. Recent action games have boasted updated mechanics that make the genre more fluid than ever, but God of War is content with pasting old gameplay in a new environment. If this was the first God of War you ever played and you hadn’t experienced the aforementioned titles, combat would seem fantastic, but for anyone else it’s getting a bit tired — as conventionally solid as it may be.

The most notable aspect of Ascension is the debut of online multiplayer. After years of being a solo experience, fans can now do battle with or against foes across the world as they appease the gods. Players first align themselves with one of the Gods of Olympus, including Poseidon, Zeus, Hades and Ares, unlocking their respective magic. While practically everybody’s characters physically look the same (outside of selectable skin tone), weapons and armor can be customized to grant a more personal look and varied stats. Multiple modes are available, including Team Favor of the Gods (where players capture altars, kill enemies and open chests to earn favor), Match of the Champions (a fight to the death where every kill earns favor), Trial of the Gods (a cooperative race against the Hourglass of Olympus in an epic trial of endurance) and the self-explanatory Capture the Flag. For an hack ‘n’ slash, there’s a surprising amount of modes and maps available and all are quite enjoyable. Add fairly-deep customization to the mix and there’s worthwhile multiplayer here that is something a group of friends (or clan) could get addicted to. 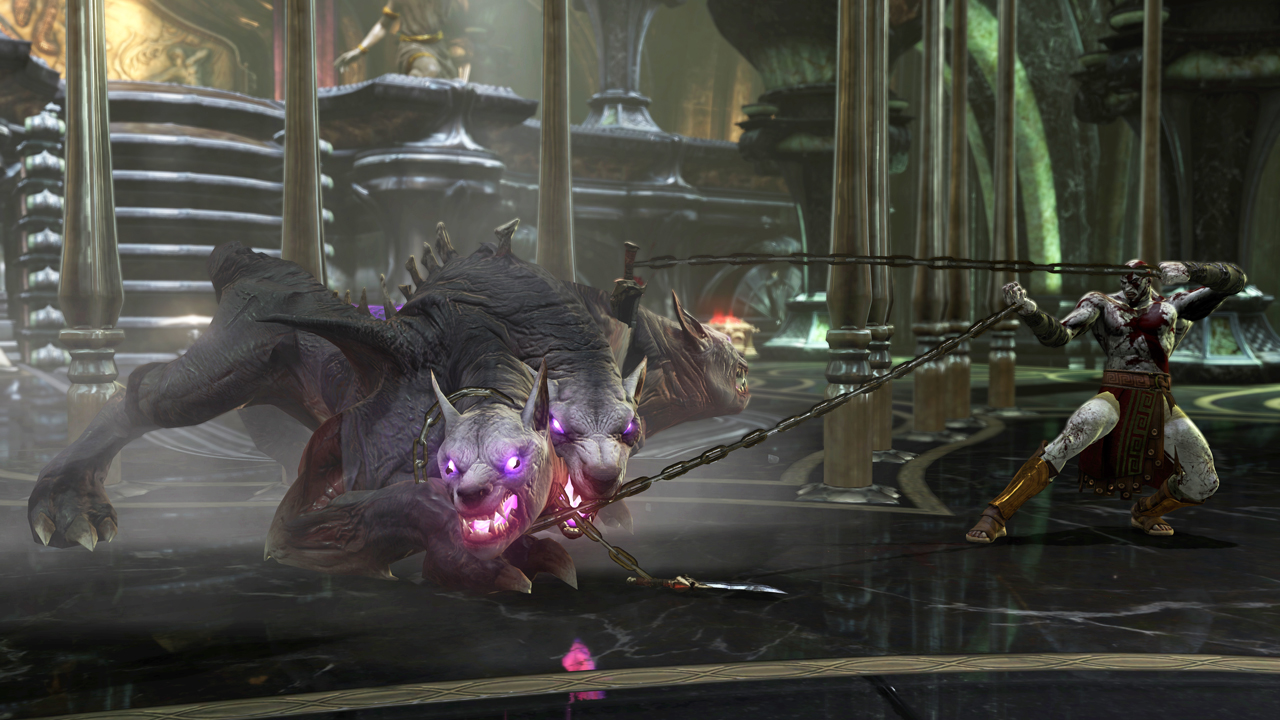 God of War: Ascension is another great entry into the beloved series that fans will eat-up, but it’s just that — another entry. While other hack ‘n’ slash series like DmC have been reinvented and boast fresh mechanics and tone, Ascension is content with simply being another God of War. That’s enough to wholeheartedly recommend the game, though, and with a beefy single player campaign full of jaw-dropping moments and the series addictive multiplayer debut, it’s an experience well worth having. Hopefully Ascension ends up a precursor to a much-desired reboot, but even if it doesn’t, you can still cut open the head of an Elephantaur to expose its brain; at the end of the day, maybe that’s what counts.