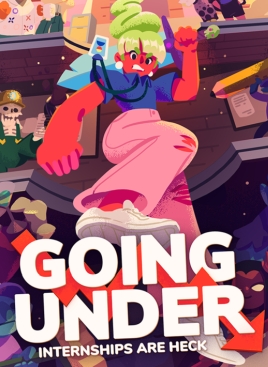 In a way, hunting for a perfect job or working with a menial one in this day and age is a lot like a roguelike or a dungeon crawler. You find yourself drudging through mounds of chaos, trying to find anything useful that you could use to advance, grinding for any small payments so that you can save up for a better future only to wind up heading back in again and again, maybe getting fired…I guess…okay, look I ran out of ideas for a clever introduction and it was either this or a forced Evanescence joke. So let’s screw that and just get to the point: Going Under is a new roguelike action game from developers Aggro Crab Games and Team17. It looks fun — but is it? Let’s find out!

Going Under has us playing as Jackie, an unpaid intern beginning her new job in the oddly bright yet dystopian city of Neo-Cascadia. She’s working for Fizzle, a startup company behind a sparkling water beverage that actually replaces meals. Fizzle, however, has recently been acquired by the mega-corporation Cubicle and so their new office is located in Cubicle’s headquarters. It appears startups that fail under Cubicle go under literally, though, getting buried beneath the building. And on top of that, all of the remaining employees get turned into monsters in the process, now doomed to guard whatever secrets may still lie inside. And unfortunately for Jackie, her new boss has tasked her with clearing out these startup dungeons, totally not just so Jackie can also fetch him some relics guarded by former bosses in order to be used for his own nefarious purposes. Nope, nosiree.

And even if that was the case…well, at this point in her life, Jackie would kill — both literally and figuratively — for even a chance to move up to a paying job. I feel like a lot of us can relate. 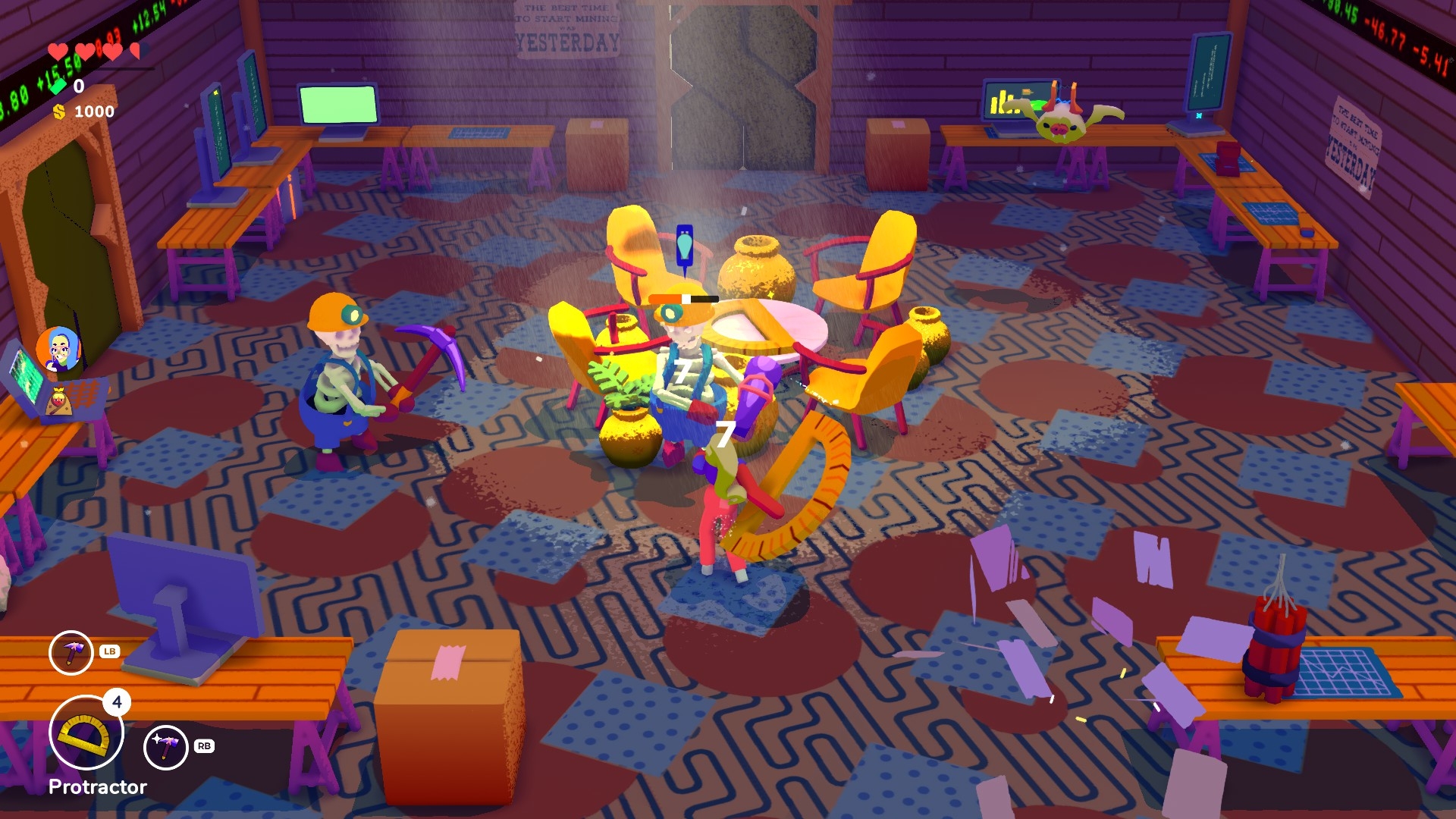 The first thing that pops out in Going Under will likely be its eye-pleasing style. Perfectly vibrant and cartoonish, simple yet filled with nice little details, and packed with a dazzling variety of colors everywhere you look. It perfectly satirizes the types of aesthetics a lot of places like Google try to fill their office with. And satire is indeed the name of the game here, poking fun at the startup and tech worlds and office life within them, like with the overly-enthusiastic founder, the accountant worried about lavish expenses, the use of algorithms to try and improve business, et cetera. It’s cute and funny stuff, helped by a likable motley crew working at Fizzle that each have colorful stories and personalities.

The jabs at the tech industry life go deeper than Fizzle, though, Each one of the dungeons is built around another failed startup, which not only determines the look and feel of each one, but sets up a new set of challenges within. You start with Joblin, an app built for gig economy that finds people work, while rideshare drivers and delivery boys will charge into you or launch coffee bombs at you. Then there’s Styxcoin, a cryptocurrency company where the enemies are literal skeletal miners, stores now sell separate items that take two different forms of currency, and blocks on chains changing from the ceiling can be swung as weapons. And then there’s Winkydink, the dating app where you communicate in emojis, and so now your enemies are horny devils and slimes decorated in emojis, fire is plentiful and enemies can actually be charmed. Cute, clever stuff, and that’s not even getting into the unique optional battles each floor of the dungeons has. 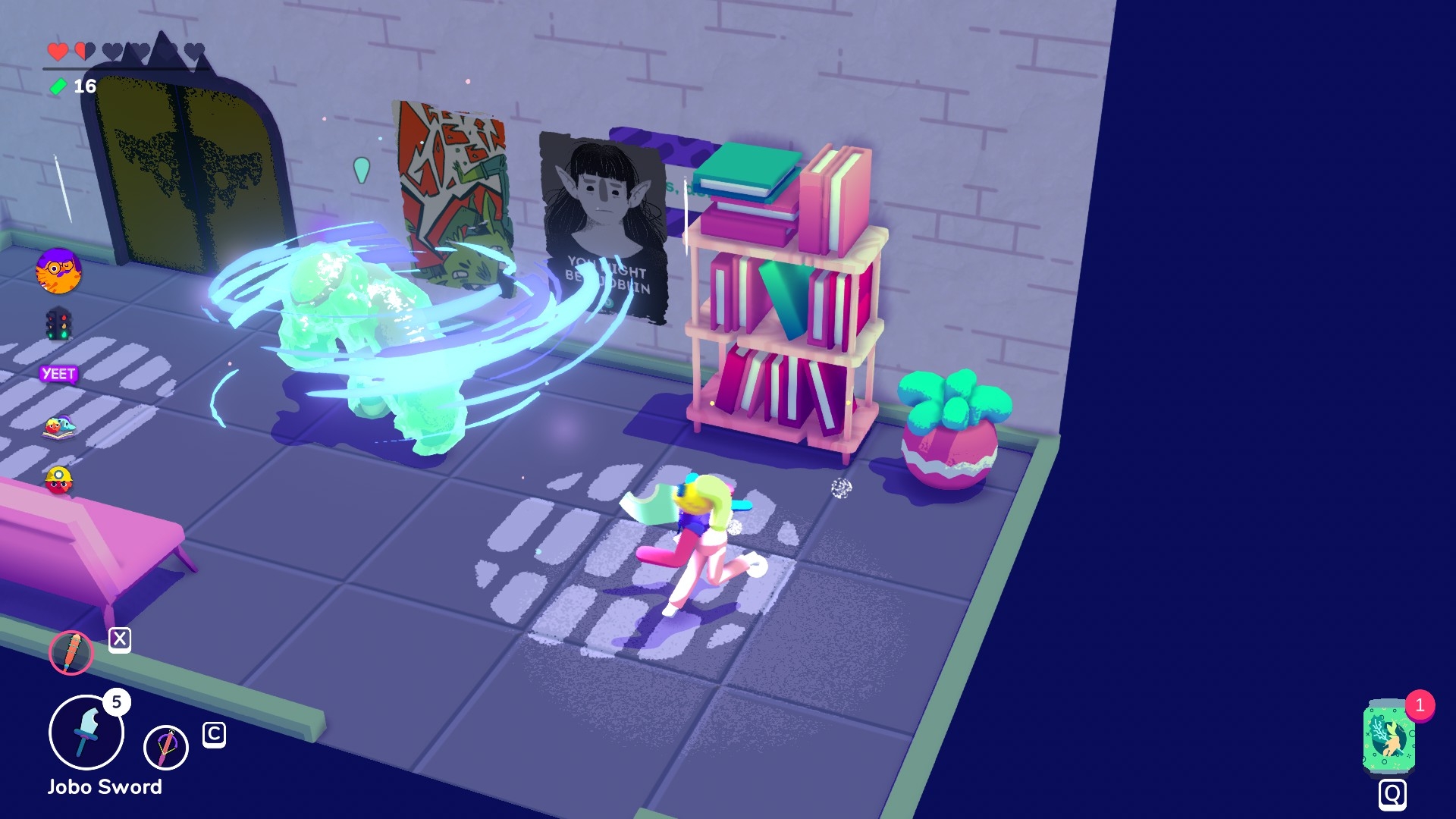 Yes, it’s all a charming sendup of the current job scene…just one that will still do everything in its power to kill you. Thankfully, combat in Going Under is simple and easy to get used to, with nice hack-and-slash gameplay. Well, unless you decide to focus on throwing objects or working with ranged weapons. Or if you just decide to try and bash heads in with body pillows. Yes, in the spirit of games such as Dead Rising, virtually everything you come across can be used as a weapon, even if you have to break a few things to get them. Some are more effective than others and work differently, of course, which nicely encourages experimentation. Actually, given that there’s weapon durability, you’ll have to get used to searching for new weapons quickly, dodge rolling across rooms of enemies to get to what you can, which can get intense.

Combat can get a bit button-mashy at times depending on how you play, but things are always fun, and the various foes and bosses put up a nice and beefy challenge. It helps that like with a lot of similar roguelike action games, there are a ton of skills to unlock and gain along the way, ranging from simple stuff like quicker movement and attacks to massive boxing gloves that allow for more powerful punches and a hard hat that allows dodge rolls to injure enemies. And as usual, part of the fun is in finding that precious combination of skills that makes you feel like a badass, even when you only have two hearts left and just entered a room with multiple hulking goblins wielding metal carts. But a nice touch is that once you’ve used the same skill enough times, you have the option of pinning it to your profile and starting each dungeon run with it.

The skill endorsements make for a nice little advantage, and they’re backed up with another nifty gameplay feature, mentors. Various co-workers will give you different optional tasks, be it killing enough enemies with a certain weapon, walking a dog through several floors that acts like a ball and chain, or just wrecking up an office pizza party that you come across. By completing enough tasks, you can gain mentors, each who provide different benefits as you do more for them. This means that with enough work, you can begin each floor with enemies fighting on your side or gain more money from battles. Or you can gain entirely new additions to the dungeons, like stores that sell one-time apps to use or cans of Fizzle that now appear which you can store and use as weaponized bursts. All of this means Going Under allows you to customize several different playstyles, which are all a blast to try out. 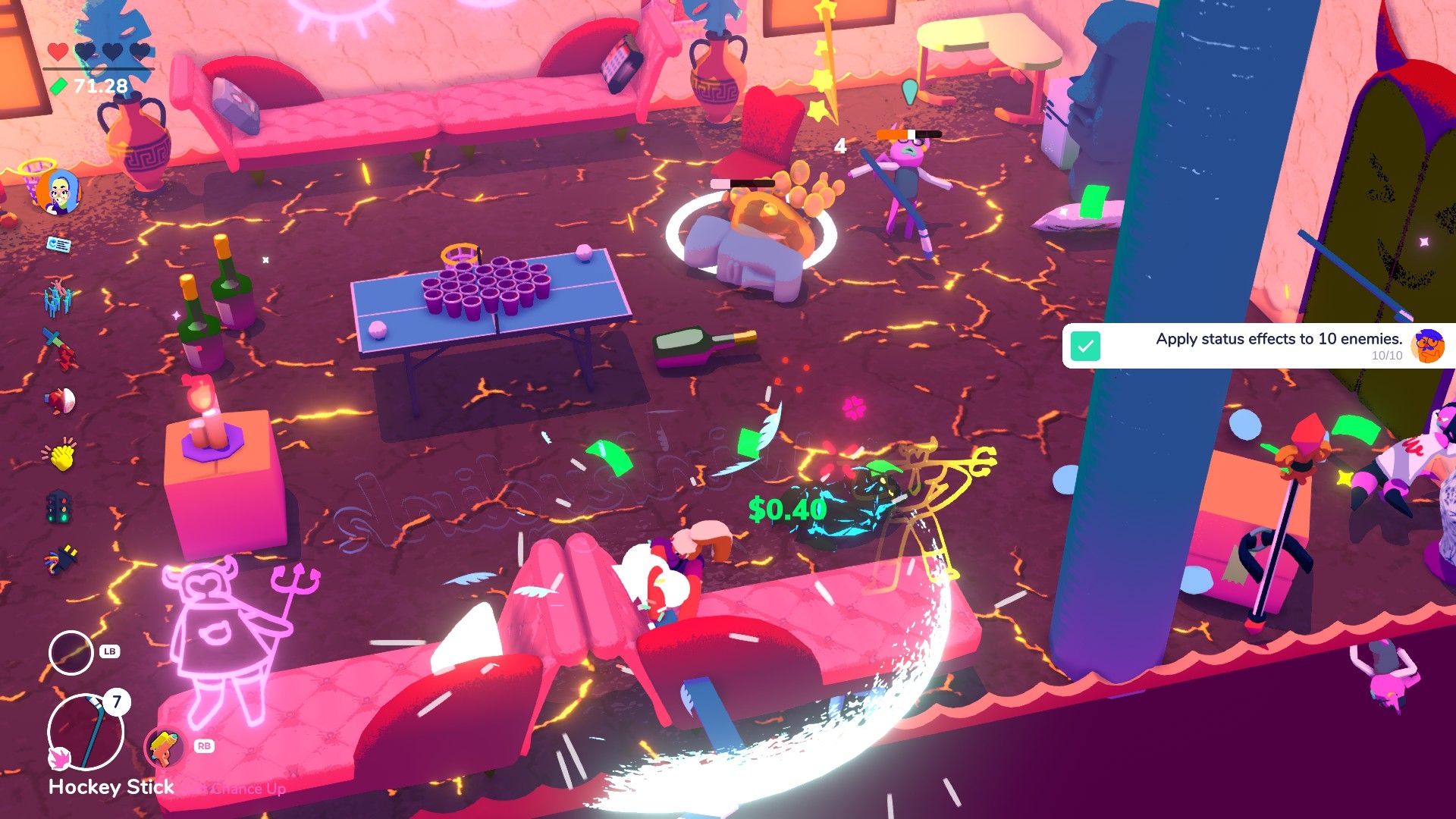 The colorful satire is fun, and the combat is amazing and varied, but is there anything in Going Under that could cause it to…um, go under? Well, there’s nothing that outright dooms it, but there are flaws. The camera can be a pain in the rear at times, mainly when trying to deal with areas that have any hazards in them. For example, in the Winkydink dungeon, it tends to hide any flame jets on walls that you’re facing away from, making for a nasty surprise. There are also a couple of annoying parts of gameplay, like how the skills that you can purchase in the Fizzle hub which will appear in dungeons later won’t gain anything new until you purchase all five that are on display.

Whereas those are relatively small issues, though, the length is a larger issue. After making my way through the three dungeons and defeating the bosses within (who were a decent challenge, although one apparently glitched out and just stopped attacking me), I was a bit worried that things would be over too soon, as I had gone through countless enemies, skills and weapons, yet still had several tasks to do for the mentors. I was hoping there would be some more company dungeons that spring up afterwards, or some truly challenging and unique final dungeon. And while trying not to spoil anything, what the game decided to do was…play the Ghouls ‘n Ghosts card and just tell me to defeat the bosses in the same three previous dungeons again, except now things are harder.

Yes, unfortunately, the second half is where Going Under threatens to grow stagnant. True, they do throw in a few new twists and obstacles, new enemies and variations on existing ones, but it doesn’t change the fact that the game is now mainly just re-using content and makes it feel like you’ve seen nearly everything the game has to offer after a few hours. And the story and world-building don’t even make any more great advances as well, with Jackie’s co-workers, shopkeepers and the like running out of dialogue. And the sudden difficulty spike does feel awkward, as it makes the completion of any remaining tasks even more difficult, not helped by there seemingly being no way to replay the previous versions of the dungeons. A grind is expected in roguelikes, but it just gets annoying at this part. 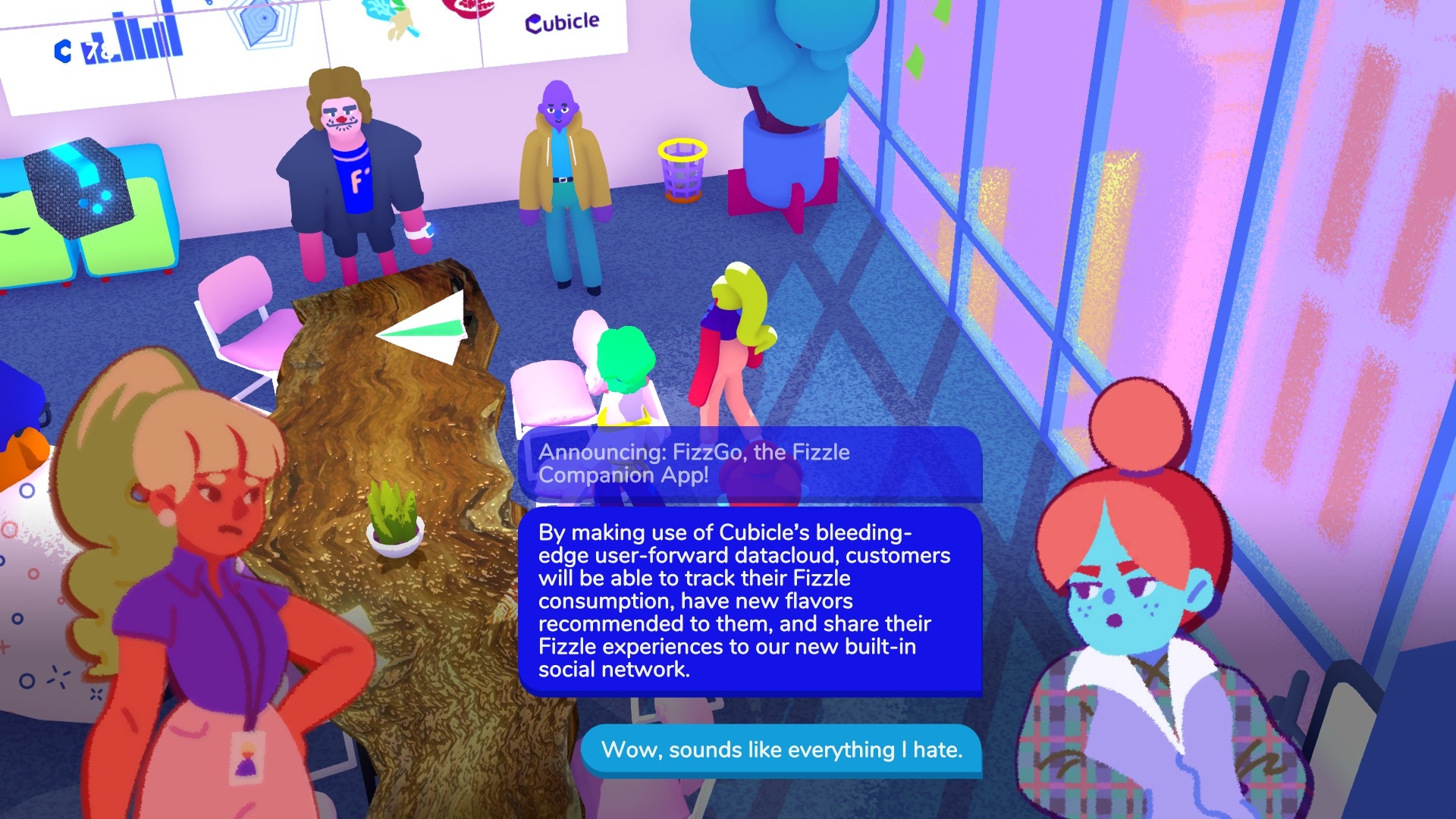 Going Under may not be the equivalent of a monolithic business worth billions, but it still ends up being a highly-successful venture that provides a fun and enjoyable service. The combat is smooth and rewards varied approaches, the weapons are a blast to play with, and everything is nice and challenging. Throw in a clever and sweet satire of tech startups and the end package is something worth checking out. Killing hordes of monsters may sound like a thankless job, but it does end up being something that nicely pays off here.