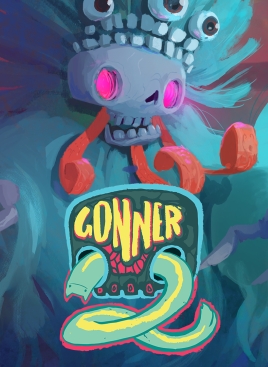 I’m starting to think that I may be burnt out on extremely challenging games. Crown Trick, Hades, ScourgeBringer, Disc Room…tackling a bunch of games like that all in a row can be an enjoyable yet draining task. And now here I am with GONNER2, another tough-as-nails title that’s a sequel to the original game from 2016. And while I enjoyed the first GoNNER and was excited for the sequel, something just didn’t click when I actually went and gave this follow-up a go. Was it indeed just a case of being tired with so many challenges in a row or is the latest from Art in Heart lacking something essential?

GONNER2 sees the return of our hero Ikk, now tasked with having to assist Death in taking down a mysterious presence that has infected their lair and that’s pretty much it for the premise. You’re immediately thrown into things this time around, with not even any still images like with the first game’s intro. There’s not even much in the way of a tutorial, which may work well for something like Hades, where the basics are quick to learn and it teaches you the rest over time, but GONNER2 doesn’t even seem to let you view what the controls are. No way to rebind controls or anything. It was several attempted runs in before I realized that the game even had a dash function, let alone what button was used for it!

The emphasis here is more on the visuals and the action, relying on simple yet fun gameplay loops, but GONNER2 almost feels too vague at times. Sure, it’s mainly just a run-and-gun action-platformer, but it could still use a little more when it comes to getting players used to the chaos that’s soon to follow. Even more so, because said chaos is honestly kind of aggravating this time around. Compared to the original, enemies kind of feel faster and more aggressive, and they tend to gang up on you in groups easily in the later stages. Something just feels off and I think that may have to do with certain changes and upgrades added to this new installment. 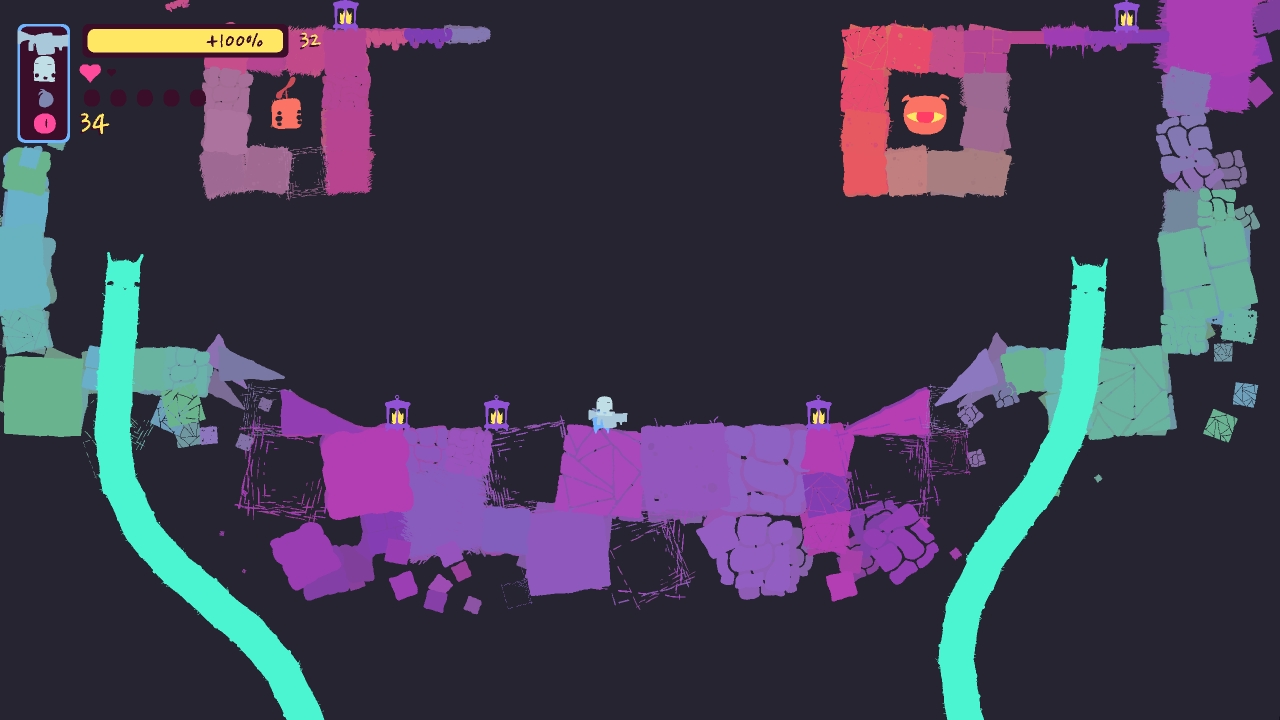 GONNER2 does have a nice crop of new features, but it seems as though they had trouble when it came to balancing the difficulty to account for them, because every positive change feels like it’s accompanied by a negative one. Let’s allow players to fire their gun in all directions now, and give them a dash move to help maneuver around and dodge enemies! Okay, but now the game is more reliant on shooting and less on platforming and being able to jump on enemies. Let’s give players more currency to spend on an even bigger variety of items at the shops! Okay, but now currency and ammo dissipate fast once they hit the ground. Let’s give players the option to select one of two random levels beforehand, giving them more options! Okay, but now that means possibly getting stuck with harder levels, and we’ll also remove the ability to just start a new procedurally-generated version of the level once you die, forcing players through the hub every time.

Things can get frustrating, to say the least. And it doesn’t help that GONNER2 can get cheap at times. Sure, the occasional cheap hit is expected, it’s basically par for the course in this type of game. But there were several of these here, largely related to the mechanic of having to regain your head, gun and backpack when hit, jumping and running over to them. This was in the first game as well, but there it seemed like all your missing items were closer to you, making it a bit easier. Here, they always seem to get scattered more often, which makes it more annoying when trying to get everything together when half a dozen enemies are on you.

It doesn’t help that the continue system is flawed as well. Once you die, you gain the option to spend some currency to get going again, but all it does is kick your headless body back to the beginning of the stage, still requiring you to make your way back and collect your stuff. Yes, it’s a common feature seen in games like Dark Souls or Shovel Knight, but where those games make sure you still have enough skills to reach them and have properly reset the stage, GONNER2 basically expects you to somehow tackle the eight or so enemies still surrounding your stuff with even less equipment than when you died. 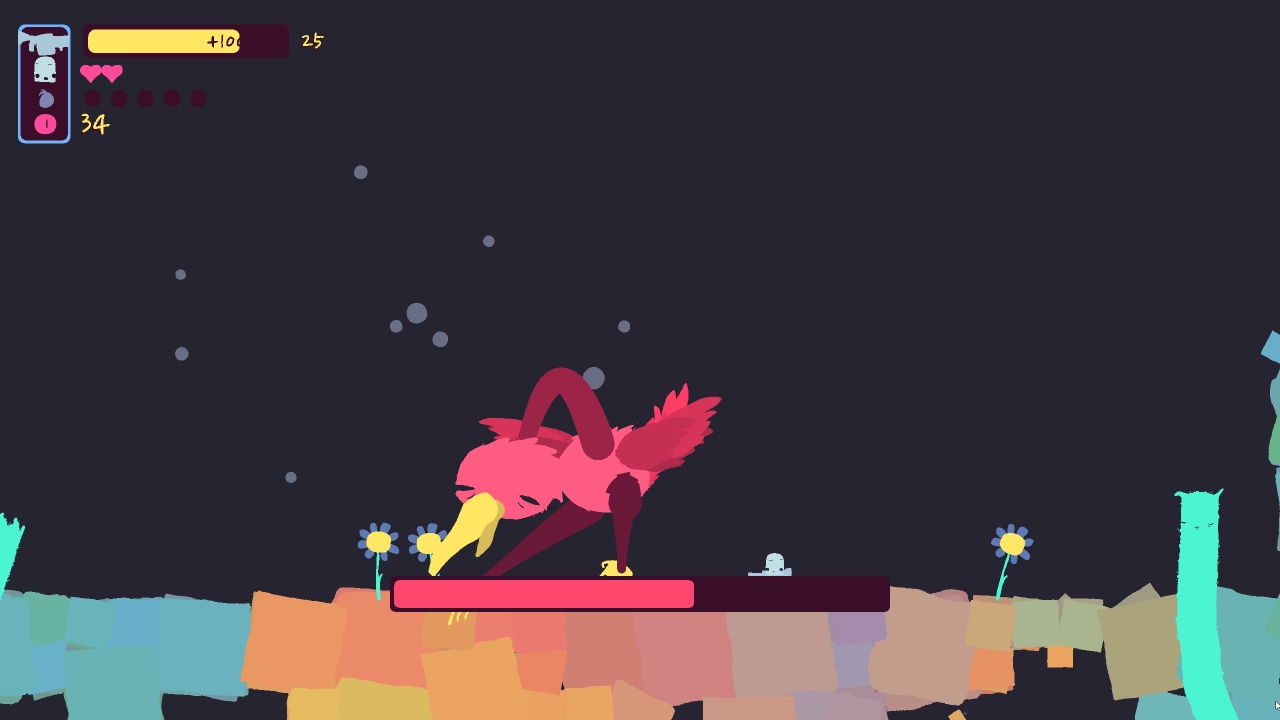 The lowest point here is when it comes to the bosses. Just as I was defeating one boss thanks to the help of a newly-obtained grenade launcher, I accidentally took a couple of fatal hits. Luckily, I had enough currency for two continues. But then when I tried to continue, the boss decided to outright camp near the gate where I spawned from, meaning the moment after I continued, I instantly died anyway. It was just so annoying. Between the huge crowds of enemies that can spawn and the bosses that all lurk after you too much, it felt like the only way to survive is to have someone watching your back, which makes it no surprise that a big new addition is that of co-op for up to four players. It makes it easy to question if GONNER2 committed a sacrifice at the altar of multiplayer, not realizing that you have to tweak the game balance to account for both solo and multiplayer.

And somehow, the worst thing about all of this is that despite all of the several previous paragraphs filled with complaints, I still like GONNER2, and still consider it to be decent overall. It’s just that everything good about GONNER2 can be summed up as “everything already good about GoNNER, except about twenty percent better or so.” The surreal visual style is still amazing, with the patchwork-like blocks popping in as level builds while you progress looking more colorful than ever, and the award-winning music is still a quirky blast. Enemy sprites are more detailed with smoother animation (the bosses in particular are spectacular), the variety of weapons and abilities that you can unlock are fun to try out, and there are various cool secrets to try and find. And as mentioned earlier, moving from horizontal shooting to all directions is welcome, as is the dash move, and things are faster than before. There is a good game in here, it’s just buried underneath poor choices that cheapen the experience. 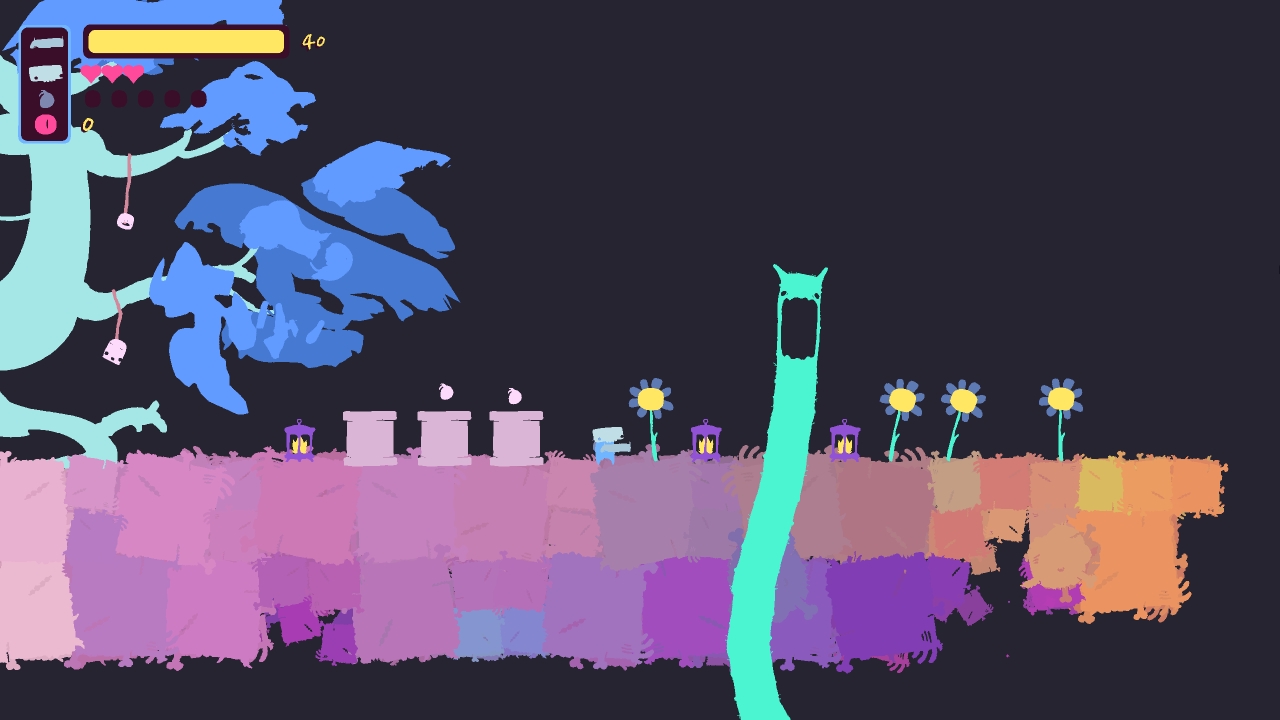 The more die-hard fans of the first game may be able to get past the more frustrating elements of GONNER2, but others may be turned off by how cheap it can get at times. Still, the core gameplay is simple yet enjoyable, and like before, GONNER2 looks and sounds stunning. But the end result is like when you watch an older cartoon at a higher FPS: it’s faster, still pretty, and the content at the core is still the same, yet there’s still this awkward quality to it that’s just hard to ignore.