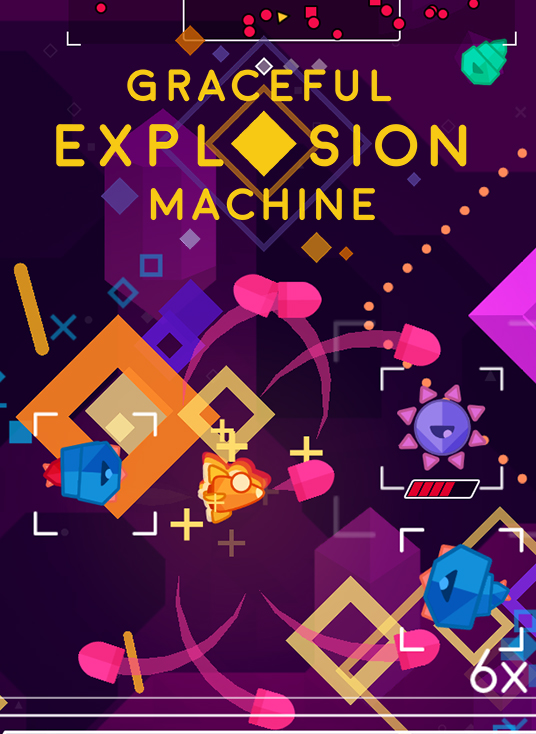 The whole point of a shooter is to shoot things. It’s right there in the name. Guns are weapons designed to keep enemies at least an arms length away, and while sometimes the screen gets crowded with bullets and danger is far too close for comfort, the gameplay is all about carving out a safe space and making sure things doesn’t get too out of hand within it. Graceful Explosion Machine is a horizontal shooter that acts like a brawler, which means the action gets much closer and more personal.

The plot is no more complicated than “escape dangerous planets,” and the ship’s got four weapons plus a boost to handle all the hazards the catacombs throw its way. While it starts off weak, with just the main standard rapid-fire single-shot weapon, the ship is fully powered up at the start of the third level and ready to punch its way through an ever-expanding gallery of enemies requiring full use of its arsenal to eradicate. Guns, missiles, sword and dash all have their strengths and weaknesses, but once you can read a situation it’s always obvious which is the best to head in with to keep the score-combo alive.

The basic gun is the starting weapon, shooting forward in a straight line. It doesn’t have infinite range but shoots far enough to take care of any immediate threat, taking off a single pip of life per hit. For the little popcorn enemies that’s plenty, but once they start growing it’s time to pull out something with a bit more punch behind it. The energy sword is the second weapon you find, and it swings around the ship doing heavy damage to anything in its path while also being the only way to cancel enemy bullets. The next power-weapon is a missile barrage, which can either shoot out in all directions or be focused wherever you’d like, depending on whether you’re pointing the joystick or not when firing. The final weapon is a sniper beam, which is a single overwhelming laser firing straight ahead that increases its damage output the longer it’s focused on an enemy. Each weapon has its own face button, Radiant Silvergun-style, making it simple to instantly switch firepower as necessary, but overuse of the more powerful guns drains energy more quickly than it can be replenished. 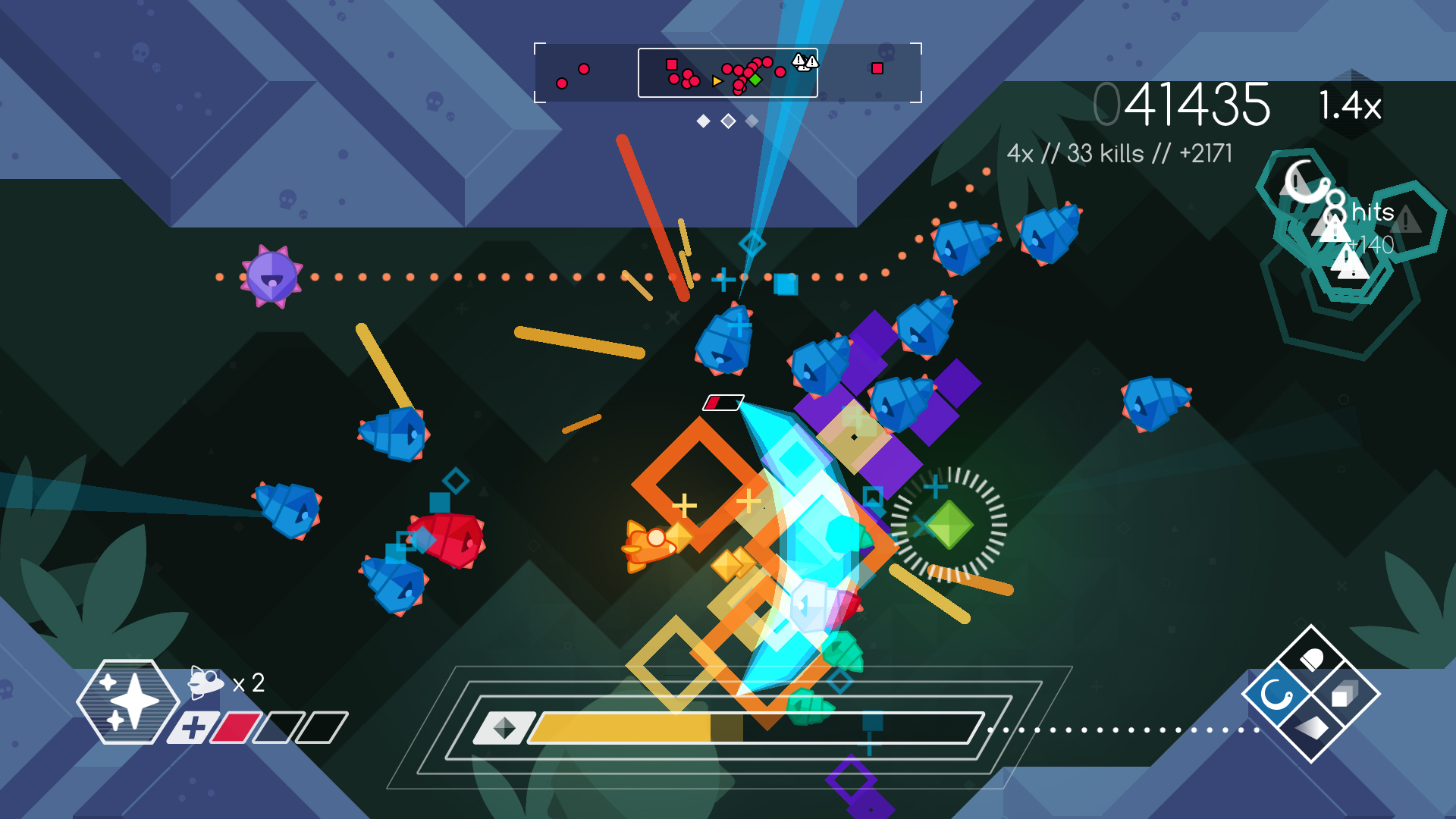 While the ship’s energy meter fills up at a decent pace all by itself, it would be better suited to skirmishes than the drawn-out slugfest of each level without an alternate way of refueling. Rely too much on the missiles, or swing the sword around a bit too freely, and all you’ll be left with is the standard gun while the meter recharges. It can be helped along, however, by the gems left behind by exploded enemies, and seeing as you’re almost always in the middle of the fight there will usually be a few pickups to help put the bigger weapons back into play.  If not, you can always use the dash to run away, but while the dash zips through enemies without any damage it’s less effective against bullets or lasers.  It’s also a vital part of keeping the score combo alive.

Graceful Explosion Machine has a simple but harsh scoring system.  Each destroyed enemy adds 0.1x to the multiplier, and if there’s a cap to how high it can go then I never reached it.  Take too long between dispatching one enemy and the next, or take a hit, and the multiplier drops back to x1.  The main gun performs the bulk of the shooting but overheats with extended use, so you’ll need to change it up with the secondary weapons, which take energy off the meter.  The rhythm is to kill things to get energy to kill more things while never stopping so the multiplier shoots through the roof, balancing gun usage while managing energy to keep the chain alive.  During the rare moments when enemies get scarce the dash can take you to a busier spot on the map in short order, and has the added bonus of freezing the clock on the score mulitplier timing out while in use.  There are a lot of tools to keep the multiplier high and see the score shoot through the roof, but the penalty for screwing up even slightly is very high. 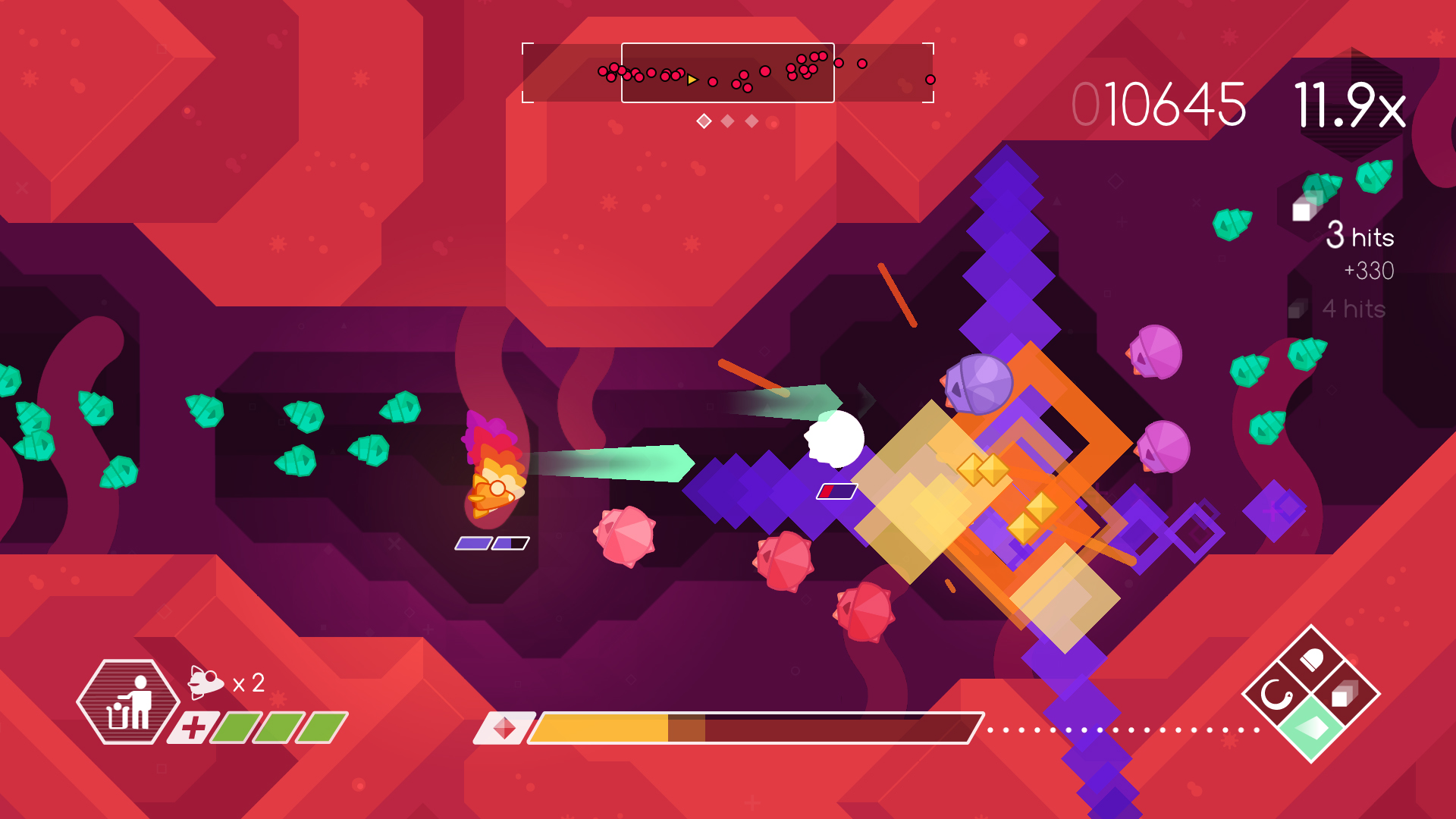 Taking a hit or letting the combo lapse at the start of a level isn’t too big a deal, seeing as you’ll make it up over time, and the same holds true for the last couple of enemies.  It would have been nice to get that x60 multiplier on the last couple of space-critters but by then you’ll have topped 100k and gotten at least an S ranking, so the only thing left to strive for would be bragging rights for an online leaderboard position.  If the multiplier lapses anywhere in the middle of the level, though, then any potential score goals are shot and you might as well start over.  Worse, if you actually die and use one of your two continues, the score is reset to zero.  Each level is three stages long, with death resetting you to the start of the stage, so dying in section three is particularly painful.  Playing for score takes perfection, but thankfully playing for fun is much easier.

There’s action of Graceful Explosion Machine is tuned to near-perfection.  The way the weapons, dash, and energy bar interact keep you switching tactics constantly, as does the regular introduction of new enemies to the mix.  The little green guys swarm in packs, easily eliminated with a single shot per critter or a whole bunch at once with a missile barrage, while the bigger blue versions are both tougher and more aggressive.  Purple worms need to be taken apart segment by segment, gun emplacements are best approached from above or below and eliminated with a sword swing, purple triangle-ships fire an inconvenient suicide bullet, and giant rock monsters pop from the ground just waiting for a high-powered laser to the face.  Enemies teleport in with an obvious signal, and it doesn’t take long for the screen to get crowded with activity.  The horizontal arena wrap around, so there’s usually somewhere a bit safer to dash towards if necessary, but for the most part you’ll be in the thick of the fight with enemies on either side.  The combat quickly goes from feeling like a shooter to being more like punching enemies with bullets, rarely with more than a tiny sliver of a safe zone around the ship.  Even when there’s space, though, you’ll want to dash into the midst of the fray to pick up dropped gems, refilling the energy meter and allowing another multi-enemy-eliminating barrage of the big guns. 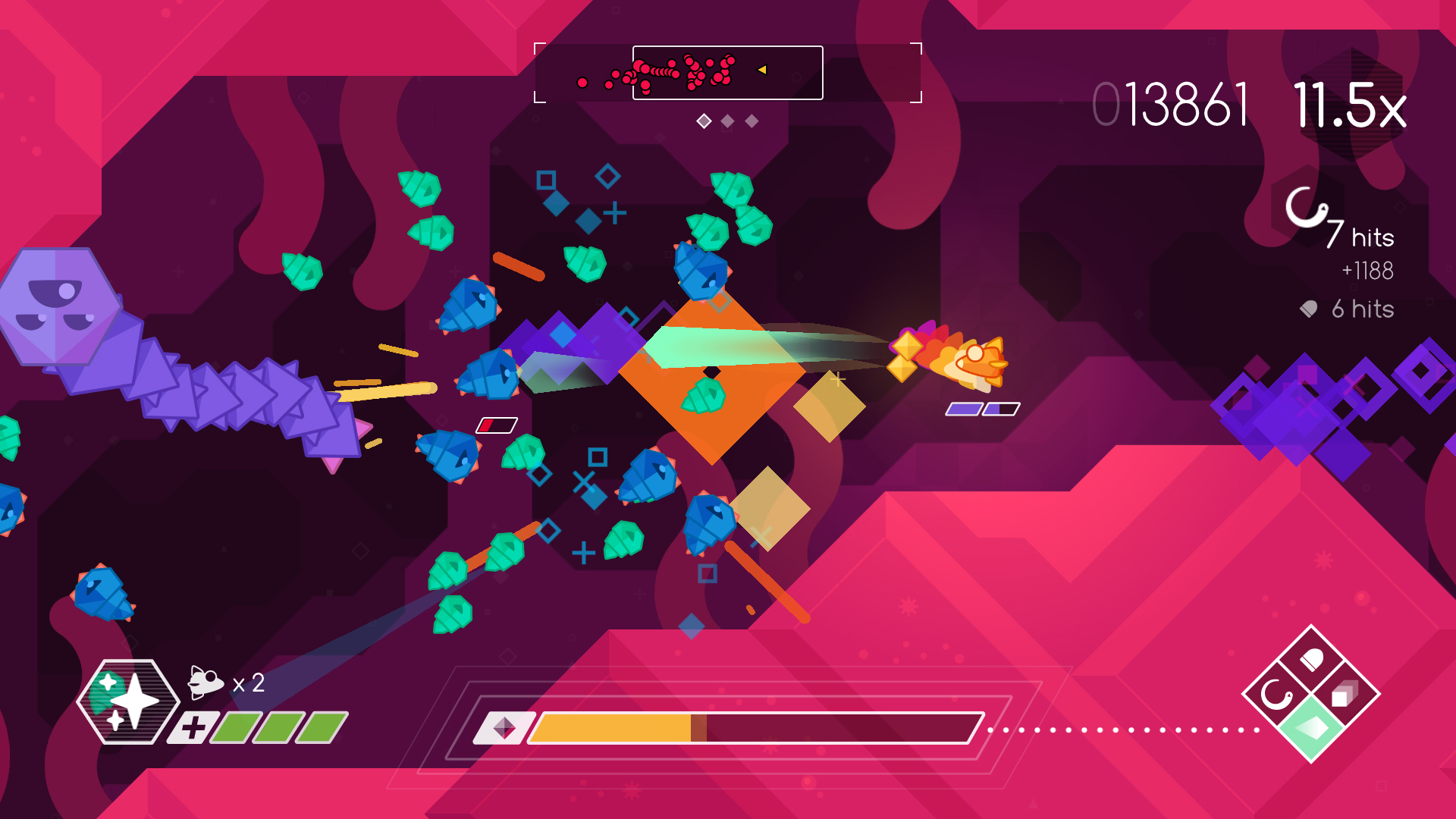 Graceful Explosion Machine is fantastic arcade action where being able to plan while forced into close-quarter shooting is the only way to survive.  It only takes a little practice for each face-button to be an instinctual reaction, changing weapons with barely a thought to exploit an ever-changing encounter.  Missile barrage going in to soften up a swarm with normal gun immediately after to take care of the stragglers, keep firing while gathering up gems to top off the energy gauge, dash out of the way to avoid the next round teleporting in, then swing the sword to clear out a gun emplacement that materialized on the other side of a small rise.  More is coming quick and there’s no room to breathe, so on to another shot of missiles to buy a little space, then keep doing that to level’s end.  The shooting is fast and punchy, and when the situation heats up, it’s a knock-down drag-out fight to stay alive and keep the multiplier high.  Graceful Explosion Machine is a white-knuckle shooter that barely allows for a moment’s rest as swarms of weird alien creatures  arrive one after the other to crowd you off their planet, never quite realizing that the denser they swarm, the higher the multiplier can get.  They’re not too bright that way, but with a little careful weapons management, it will all work out fine.