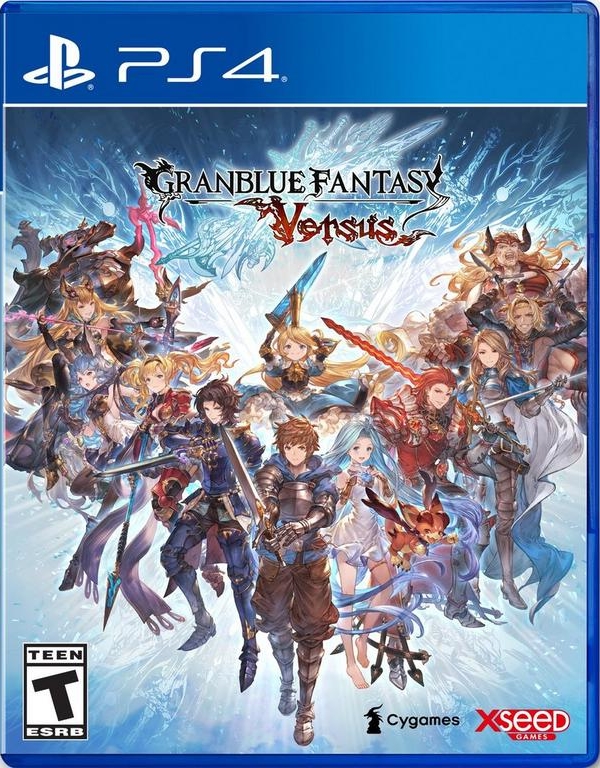 Back in 2014, Granblue Fantasy launched on mobile devices in Japan for players to enjoy. It almost immediately took off in popularity and has continued to remain successful to this day with both Japanese and western audiences. Just last year players were introduced to Granblue Fantasy: Versus, a spin-off fighting title that takes many of the beloved cast from the mobile title and implants them in a world of traditional fighting with its own unique twists. So just how well does this title stand on its own as a fighter and does it use the world of Granblue well enough to be memorable?

While most fighting titles have brief, loose stories that tend to be easy to brush off, Granblue is a series that has remained popular because of its enjoyable story and characters. Fortunately for those who still want to experience that, there’s an actual story mode that even helps introduce characters to those new to the series. The story focuses on the titular character Gran, who is on his way with friends to meet up with the knight Katalina. Unfortunately for them, some dark force is taking over and possessing people causing them to lose parts of their memory and attack those they were once close with. With no way to get out of it but to fight, Gran seeks to help restore his friends to their former selves and find out just who or what is causing this mess before things go even more awry.

Although it may not be the main draw, the Versus RPG mode is the first option players will have when starting up. It plays a tad differently than regular one-on-one matches, but it also acts as one of the two ways new players can learn how the basic control scheme works. The first few quests will act more or less like tutorials and the way it plays is a little bit more like an arcade beat ’em up than a straight fighter. Characters can actually turn in RPG mode and will not always face their opponent in combat. Multiple enemies will typically appear in screen at once, each with their own health bar that doesn’t typically take too long to eat away at. After a wave of enemies has been defeated characters will either move to the next screen or go into the next cutscene. Sometimes battles will be timed and require the character to survive, while most will require enough enemies to be beaten. Outside of the beat ’em up style missions there are also boss fights which play more traditionally to the main fighting style but still differ slightly. For one, the opponent’s health bar is on the bottom to accommodate its larger size and the exclusive overdrive mode which bosses will get into once they’ve taken enough damage. Decreasing the overdrive bar will cause them to break and be vulnerable to attacks, making it the ideal time to dish out some damage. Each mission also has three objectives that will reward extra items to help make characters stronger, so it’s always good to check them before heading into a mission. 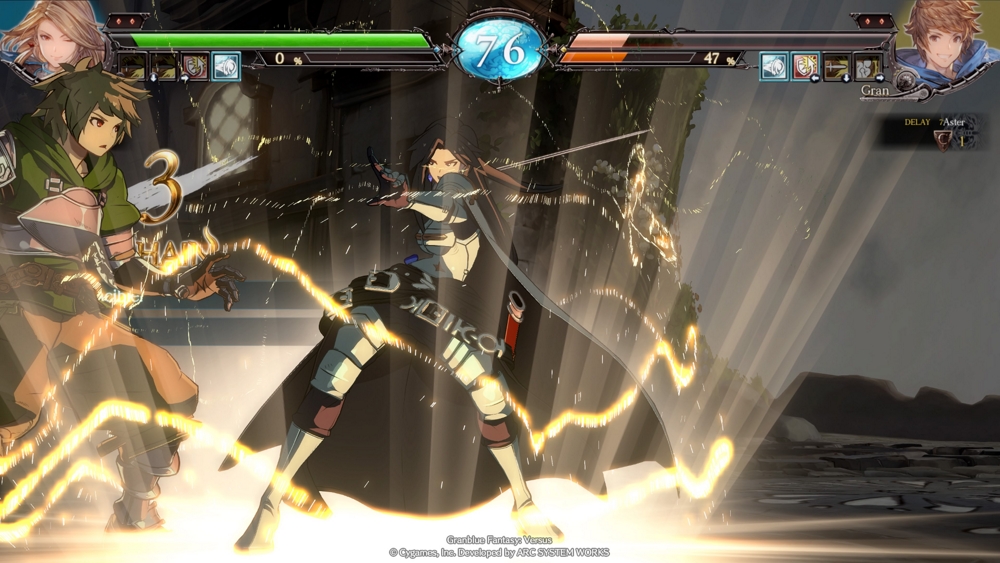 RPG mode isn’t just about going in fight after fight without stopping. Instead, it actually borrows key elements from the mobile gacha title. For one, each character has their own individual level that can be increased through fighting in missions. Missions also reward weapons that characters can use and actively make stronger throughout their journey. It’s important to pay attention to weapons as they will each have their own elemental properties which may be more effective against enemies in each mission. None of these mechanics affect the main fighting part of Versus, but instead will unlock visual extras for players to wear in their fights. Weapons can increase their strength by unbinding and those wanting to get more rare weapons can draw them using tickets for a chance at getting better ones. The RPG mode also has support skills for each character to be used in battles which offer benefits such as increasing attack party or healing when in a tight pinch. As more characters are unlocked up to two can be taken on a mission. For those who would rather not adventure with a computer ally, shortly after the main tutorial the ability to play online will unlock and allow friends to party up.

Of course, most people aren’t necessarily picking up Granblue Fantasy: Versus for its story mode. Instead, the meat of Versus of course comes from its competitive play whether online for ranks or up against friends. The base playable cast is a roster of eleven iconic characters from the series, each of which has their own greatly unique move set. The style of combat is extremely newcomer friendly and makes it easy for a beginner of fighting titles to pick up and learn, while offering more complex mechanics for those more familiar with the genre. The most interesting mechanics in Granblue is a character’s abilities, of which each has four. These are by default activated with L1 and need to recharge after being used. This unique system allows for different button combos in order to make these attacks more powerful at the cost of them taking longer to recharge. These recharges are also displayed on screen at all times so players can track which attacks can and can’t be used by the other. There are four main modes for players to check out before heading online which are Versus to battle against local or computers, Arcade which acts as a traditional continuous challenge in multiple matches, Free Training for those who wish to learn and hone their skills and finally Mission Training which is the second tutorial style method of learning how to play. Arcade is a great way to test ones skill as there are multiple difficulties and after each win players have the option to continue at the difficulty they’ve chosen or increase it for a greater challenge. Free Training offers a great way to learn and master combos by enabling the computer character to move in different ways in order to practice. Mission Training teaches players all the basics they could ever need to know from learning auto combos to blocking and learning how to pull off special attacks. 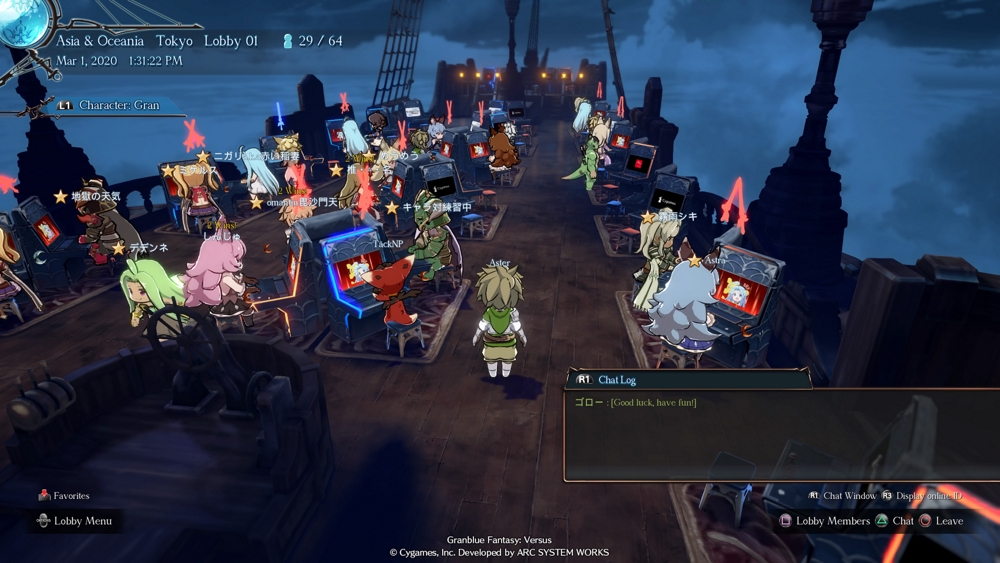 When heading online there are a couple different ways to play. By default each player will need to take part in seven placement matches in order to start ranked combat, five of which are against CPUs and two that are against another human player. Ranked Matches and lobbies are then unlocked, allowing players to compete around the world with others. Getting into ranked is a simple queue system where they can practice while they wait until they match with another person. Players can also choose to make a room and play with friends or just chat. Both lobbies and rooms have the player taking on small chibi-like versions of a Granblue character of their choosing while exploring a small free roaming area. Once in the lobby or room, players can sit down at arcade spots with another character and battle it out. When in either of these areas other players will have close ranks shown by a star above their head, indicating that they’re a similar skill level. This helps those of similar rank compete without getting trounced or finding matches too easy. Connections between fights were smooth with no delay or issues whatsoever. Replays of matches can also be freely saved to share later for those wanting to show off their accomplishments.

Versus‘ art style is endearing, being a 2.5D approach with colorful characters that pop with flashy moves that are never overbearing when in a fight. Before each match characters have specific lines they’ll say to one another which gives insight into their personality and relationship which in turn makes victory or loss have all the more impact. The backgrounds to fights look like hand-drawn illustrations with wonderful little details for those that have time to take a minute and look. The soundtrack is enjoyable to listen to and doesn’t get tiresome while going into fight after fight. The added English voice acting to the western release is fantastic at bringing the characters to life, albeit with not much talking outside of RPG mode. Although the starting roster is small, it makes up for it with a lovely creative cast of characters. 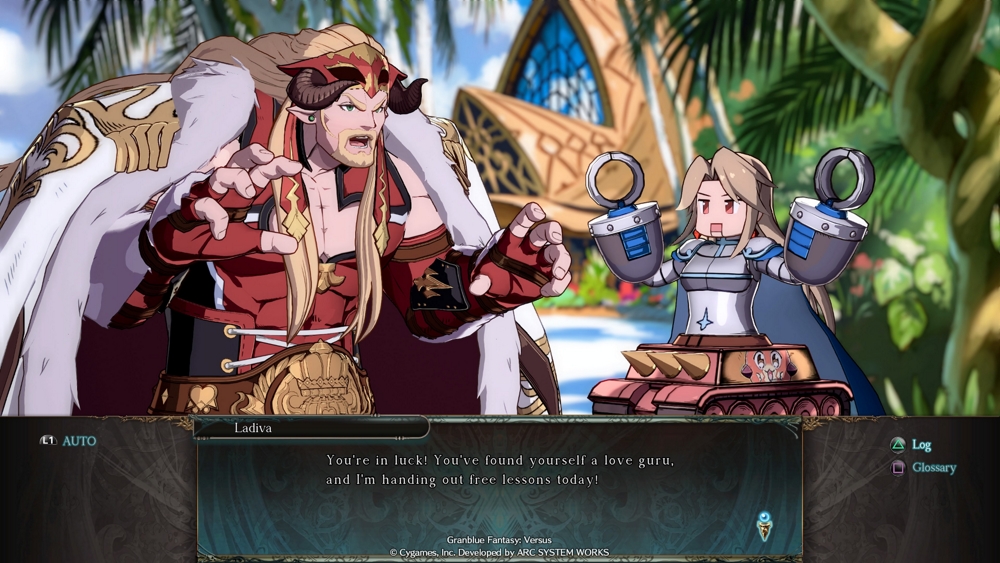 Granblue Fantasy: Versus is the series’ first game release outside of its original mobile title. Since there’s so much potential in a franchise that started as a simple mobile gacha, going the straight fighting route with devs familiar with what makes it fun was the right turn of events. Versus has fantastic combat that’s easy for newcomers to pick up quickly, while adding enough complexities that anyone familiar with fighting titles will be able to really bring out some fantastic plays with its unique combat system. Although it would be nice if the base roster had been a bit larger instead of relying on the upcoming DLC, each character feels drastically different and will make mastery of them all the more satisfying. Even those who are unfamiliar with the franchise will likely enjoy the sheer fun combat and challenging opponents that Granblue Fantasy: Versus has to offer.