One of the occupational hazards of being a video game journalist is sometimes there is hope that a game will be bad just because the write up will be more fun.  For example, I could slap on the headline Grand Kingdom is not so grand, make fun of it for a bit, hit the publish button and celebrate a job well done by killing what few brain cells are still alive with a dozen pints.  During the first hour or so during the prologue it seemed like this was going to be that type of write up, but once the tutorial masquerading as prologue was complete an unexpected thing happened: Grand Kingdom made that transition from bland and tedious to enjoyable and borderland addictive.

During the initial sequence the game holds the player’s hand instructing them on how to do every single basic thing with a troop of four characters selected from a very limited stock.  After we progress beyond this it becomes apparent that Grand Kingdom is a complex beast that is unforgiving to players who do not develop a strategy and pay attention to the various nuances of combat.  Picking up the basics can be done instantly, almost so easily that a tutorial does not seem necessary.  Thinking that is a mistake, because to actually be successful requires conscious effort, which does make any victory that much sweeter.

Aside from how attribute points are distributed when gaining a level, there is not a great deal of functional customization for characters.  Cosmetic customization on the other hand offers many options and a lot of freedom to design how the mercenary troops look.  There are 17 different classes with each one bringing something different to battle.  Each class fits into one of four different types: melee, ranged, magic, and specialty.  Melee includes the pole arm wielding lancer or the dark knight with a sword in each hand.  Ranged includes hunter and gunner, the former fights with the bow and arrow and the latter with old timey firearms.  Magic units would include the witch, which anyone can guess is a master of magic.  Specialty units are a little odd.  As the name implies their particular strength fills a niche role but they may be useless outside of that.  A challenger for example sets barrels on the battlefield.  These can be used for characters to position themselves on top of, or to blockade the enemy from advancing.  This can be a useful strategy for positioning ranged classes behind barrels, provided their attacks follow an arc. 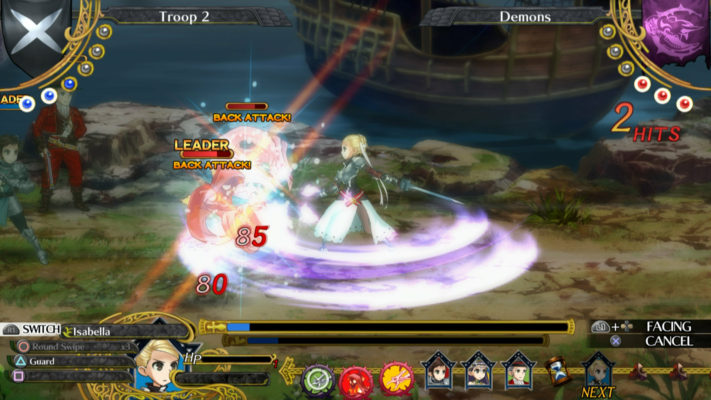 Managing these different types in the battlefield is enjoyable despite sometimes being a logistical nightmare.   Each unit moves toward their enemy on horizontal rails with three vertical levels they can move between.  Friendly fire exists in this world for both player and the AI opponents.  This has resulted in a couple situations where the enemies ended up dispatching themselves.  This sounds like an easy hazard to work around, but friendly fire is a bit more complicated than simply not targeting your teammate.  One of the lancer’s melee combo strikes is a spin move, and if an ally is adjacent to him in a different vertical plane they are being hit as well.  An enemy might be next to a healer charging up for a powerful attack.  The natural impulse here would be to get behind the bad guy and attack, but the problem with that is the reach of the weapon will extend beyond the enemy and also hit your ally as well.  The healer may have been saved from a powerful attack from an enemy, but their life bar is now at fifty percent because of actions taken to defend them.  This is also a hazard with thrown weapons such as acid vials or spells that do damage in an area of effect.

It can be extremely frustrating when the final battle of a quest is in your grasp until a poorly placed projectile kills your power hitter.  This gets further complicated by charge attacks such as lightning, which can be devastating if there are three enemies standing single file and they all get zapped at once.  It is extremely gratifying when that is successfully pulled off, equally aggravating when the enemies jump to a different level on the vertical axis that removes them from harm’s way. 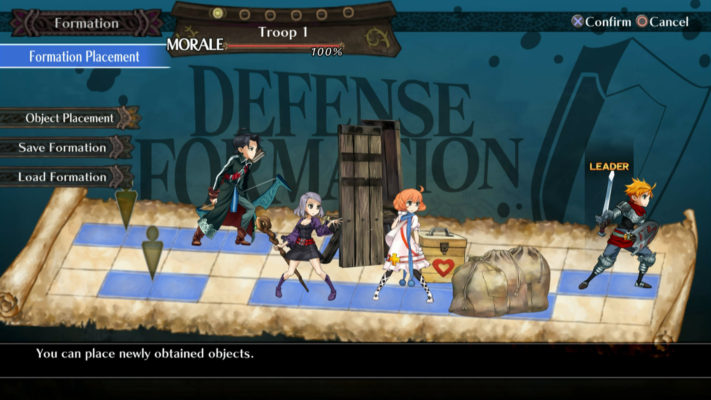 One of the most impressive character classes is the dragon witch, which is what it sounds like, a witch riding a dragon.  This magic tank is so powerful for balancing issues it takes two of the four party member slots.  This class also requires the greatest amount of finesse if the survival of your fellow Legionaries is important.  In spite of, or maybe in some sick way because of this, battles can become quite addictive, and during the review process whenever a quest was failed because the enemy turned around what should have been a sure victory, instead of rage quitting the quest was restarted with eagerness to claim vengeance.

Battles are fought in a turn based fashion with character order being somewhat random.  Sometimes the player is able to dispatch all enemies before they get a single move in, other times half the party is dead before there is even an opportunity for a button to be pressed.  Each quest takes place on an overhead map that somewhat resembles a board game where the player travels to the next objective marker, fighting and collecting treasure on the way.  With the exception of exploration quests, there is a finite number of moves that are allowed to complete the quest.  Enemies are represented by different colored moving pieces.  Purple ones are weak, red ones are strong, orange ones have high rewards but at a high risk.  Some obstacles can be surpassed by spending a few turns passing through them or in some cases the option to just rush through them but take a twenty percent penalty to the hit points is available.  Certain items can outright destroy them without costing multiple turns. 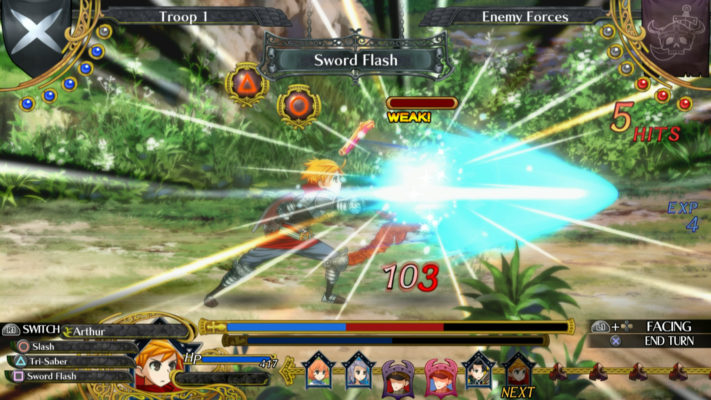 There is no shortage of ways to occupy time waging war.  There is a single player campaign that includes a rivalry with another top notch mercenary named Weisse.  He is an attempt at both a rival and comic relief but sometimes his cluelessness and overzealous enthusiasm to cross swords seemed more forced than funny most of the time.  There are side quests available in this mode including the opportunity to explore areas to grind for experience, gold, and treasure.  The exploration mode is nice because there is no limit to allowable moves which can make a more relaxed approach to getting some extra items.  There is a war mode which allows the player to sign a contract with one of the four warring kingdoms.  This is where you can pit your band of mercenaries against the troops working for other players.  You can engage in skirmishes directly against other people to acquire territory for the kingdom that has you on payroll, or this can be used as a passive opportunity to gain some money and level up your characters.  Each troop you control consists of four characters, and in the war mode they can actually be six members.  You are able to have six different troops, so referring back to the complexities mentioned earlier with juggling four very different character classes, all that can be spread across six different troops with four or six slots depending on the preferred game mode.

There is a story in the single player campaign that does not get too interesting until later in the game, something about some magic sword that is coveted by some rather evil characters.  It’s serviceable within the game but nothing too extraordinary.  The tactical combat is the real star of Grand Kingdom.  The freedom is present to switch allegiances with any kingdom you desire once the contract expires, and during the review process I didn’t care at all about which kingdom was winning the war.  Like a true sellsword, I only cared about putting together a powerful team and figuring out how to beat whichever kingdom was my employer’s enemy. 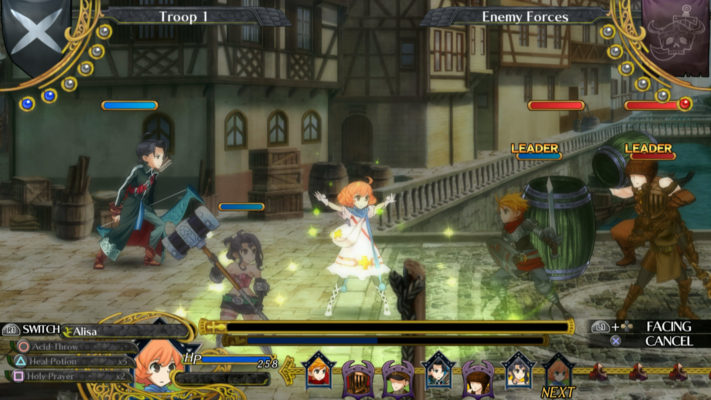 Grand Kingdom takes some time to get going, but once it does, it’s a great tactical RPG.  The dialog and story are not the highlights of the game, but the battle system makes up for it.  Getting true finesse on the battlefield does require a certain amount of trial and error which can be frustrating at times.  Some battles feel cheap, like when the enemy wins the initiative and none of your characters can escape the target range for their catapult and three of the four are dead at the start of the second turn.  Luckily this is the exception and not the rule, and there were no instances of that happening that were unable to be overcome in a subsequent attempt.  The battle system in place is deceptively complex, figuring out the best possible class combination and strategy is something that only had its surface scratched during the review process.  The team assembled was quite formidable, but given another week something even more devastating on the battlefield could be put together.  With near infinite party combinations and countless hours of quests and war, Grand Kingdom is indeed quite grand.