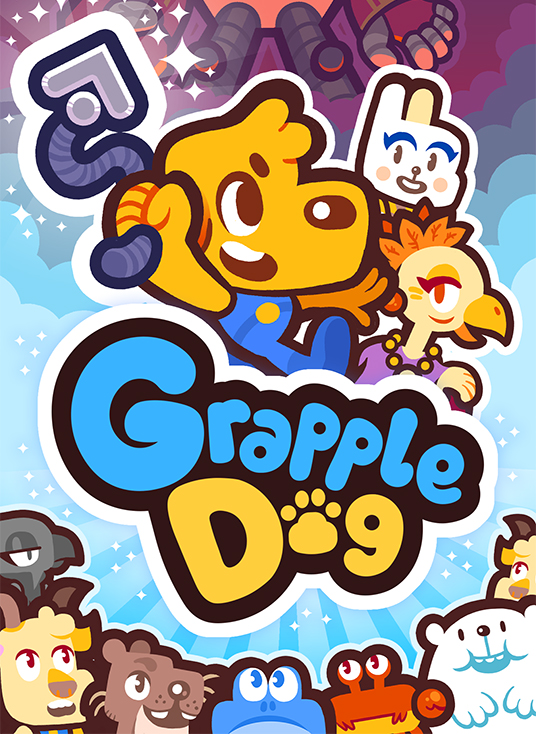 One of the best videogame tools is the grappling hook.  Guns are nice and over the years have picked up more abilities than just applying great force from a distance, but a thing that can grab on to other things way over there?  Now we’re talking!  The latest adventurer to get their hands on one is Pablo, a young and not particularly studious apprentice of the Professor.  Pablo, the other assistant Toni and the Professor are exploring the ruins of an ancient and highly-revered Inventor’s workshop when Pablo falls into the depths and unexpectedly makes a new friend.  A few minutes later he’s found the grapple but also accidentally freed a world-destroying menace, which to be fair to Pablo could have happened to anyone stuck in the unexplored secret area of a long-departed super scientist.

Understandable as it may be, the situation is still concerning so, after being rescued by Toni and the Professor, everyone sets off to try and save the world through a series island-levels, each with its own platforming gimmick that requires ever-more precise use of the grappling hook to get through.  Grapple Dog is a pure 2D platforming adventure, bright, colorful and relentlessly upbeat even as the challenge keeps ramping up.

The beginning is properly kind, though, set on a sunny chain of islands with minimal threats.  Pablo has a jump similar to Sonic’s, bashing away the wandering robo-critters whether you come up from below or drop from above, and there’s a good amount of mid-air control.  The basic walking speed isn’t particularly zippy but picks up quickly until Pablo is moving at a run, but the real speed comes from making good use of the grapple.  The hook can latch on to any part of the scenery color-coded a bright blue plus most creatures except the spiky ones.  While level props are reusable, Pablo zips towards and dispatches an enemy he latches on to and there’s of course the occasional secret area or extra pickup that requires bouncing off a critter to collect.  The real technique, of course, is managing the swing, using it to send the dog up towards otherwise-inaccessible platforms or flying across the level at top speed. 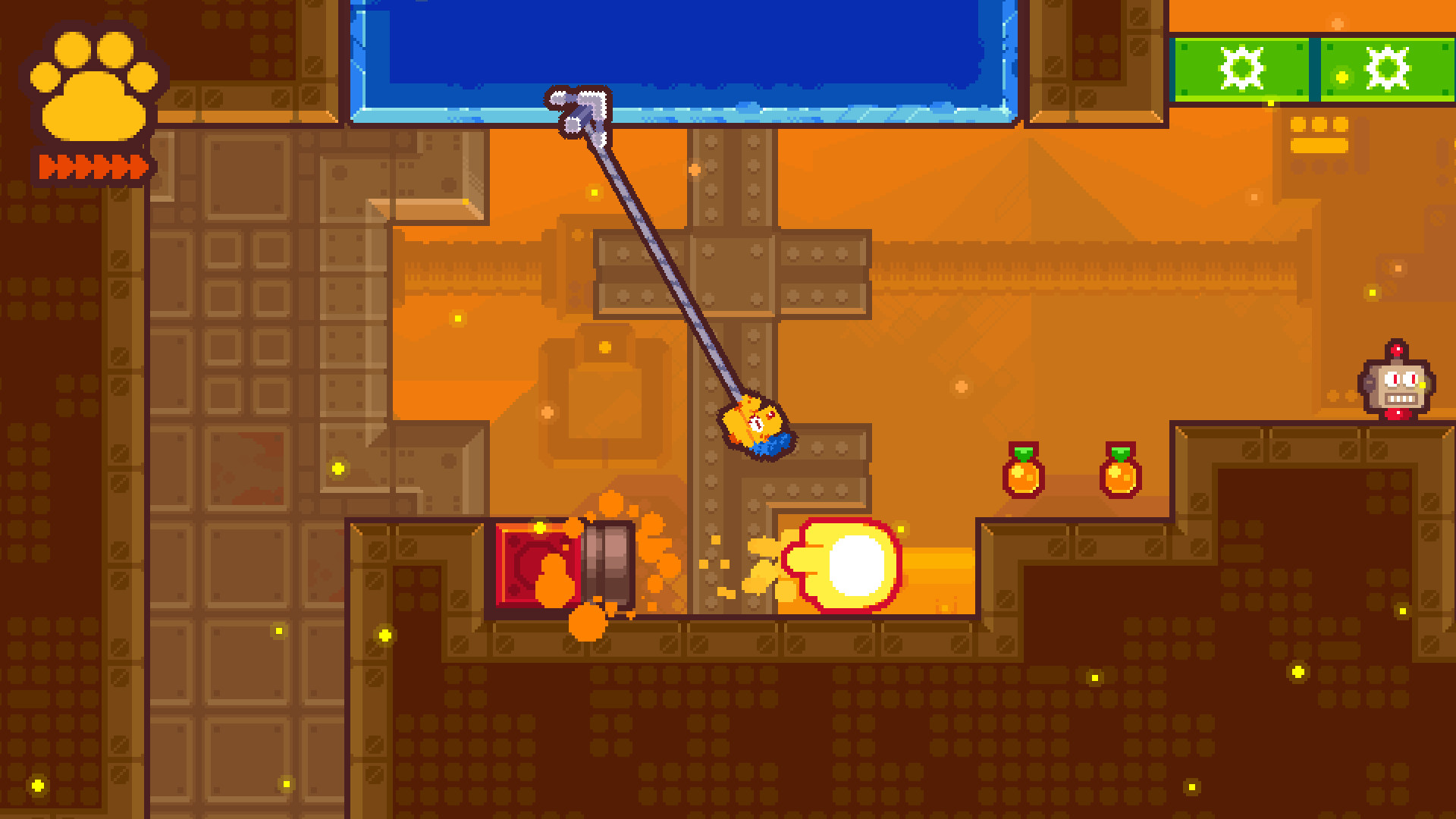 Each level plays with a new element, with challenges and the hidden gem pickups usually requiring not just a good eye to find the path but exercising the new level tool to get there.  One level, for example, has green platforms that only appear while a bell is chiming, with a meter plus the the slowly-silencing ringing letting you know just how far to push it.  Some levels feature genre staples like crumbling platforms and conveyor belts while others play off Grapple Dog‘s move set, like the green spheres you need to drop-pound to bounce off or chomping cubes that dart after Pablo as far as their chain allows but double as a platform if he can dodge their teeth.  The constant switching up of the challenge makes each level feel unique, and while not all of them work (the snake-chase level in specific is maddening) there’s always something new coming up.

Even without the variety Grapple Dog would be a likeable game, packed with style in both art design and music plus written with an fun sense of humor, but there’s also a lot to chase after in its levels.  Each level has five hidden purple gems, and while it doesn’t take many to unlock the boss encounter, you’ll need to snag at least a couple along the way.  The level keeps track of which ones you’ve found in a helpful pop-up outside each island on the world map, which also includes the gems awarded for collecting most of the oranges that are Grapple Dog‘s rings/coins equivalent.  The level info also shows if you’ve found the token that opens up a secret level, an these come with a variety of challenges from collecting all pickups, reaching the end under the time limit, or clearing all enemies.  Once a regular level is complete it also opens up a speed run challenge, and while this is in no way necessary to beat the game it’s a nice extra for those who like to squeeze every bit of efficiency out of a level run. 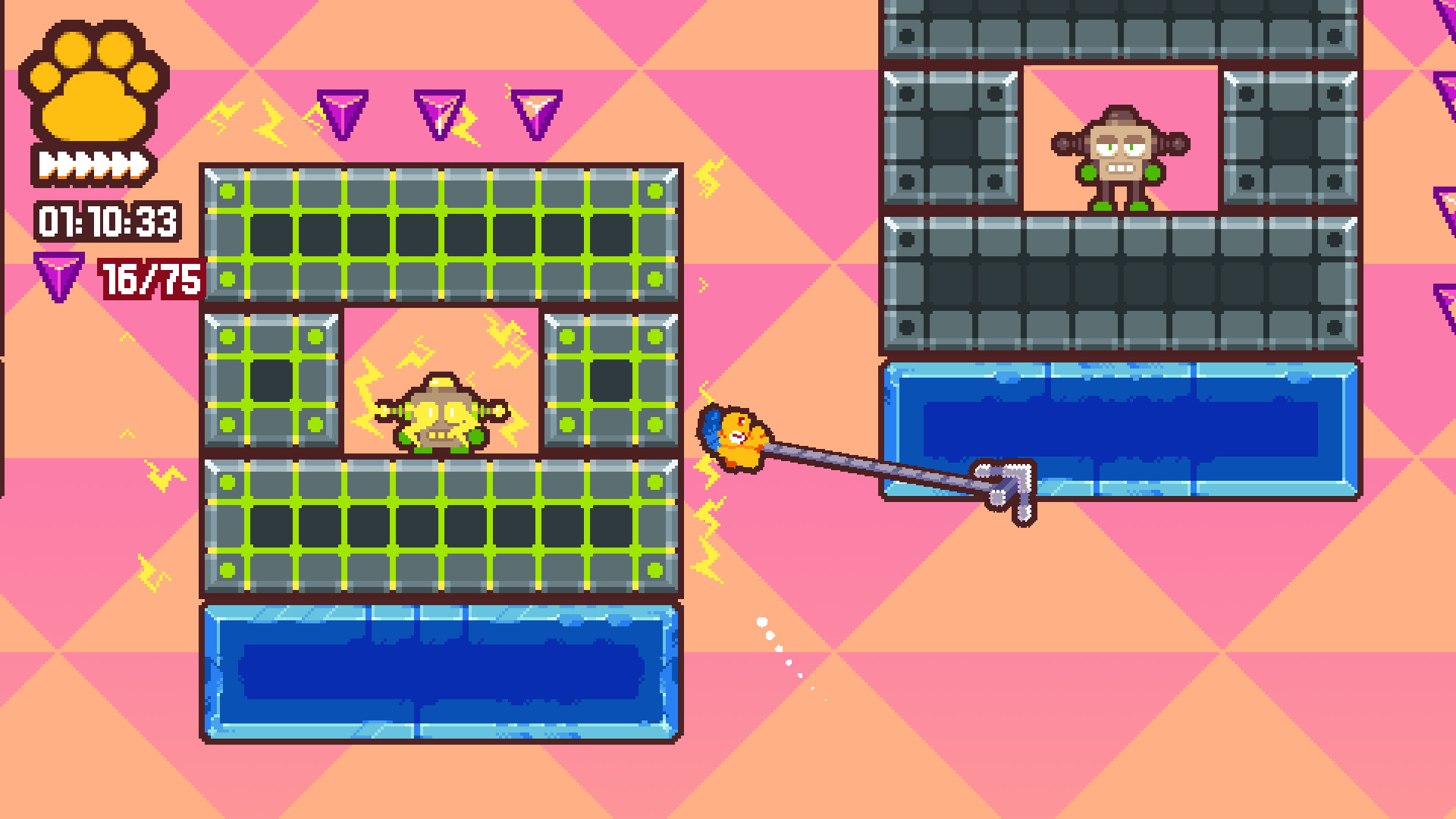 Grapple Dog is a fantastic platformer that nails just about everything it tries to do.  Pablo and crew are a likeable bunch living in a world with just enough lore to keep it moving, and it’s always worth stopping for a second to chat with the incidental characters that sometimes pop up in the levels.  The challenge level is generally just right, and for the times that a difficulty spike pops up checkpoints are usually frequent and lives infinite.  Controls are just right, and even when you end up screaming at that idiot dog to not do that dumb thing he just did, you know it’s because you misjudged when to throw out the grapple to latch on to a moving swing-point, or blew the dismount off a swing and overshot a jump, rather than the game being unpredictable.  Grapple Dog is one of the best platformers to come out in a very long time and not to be missed by anyone who’s ever loved hopping through a mascot’s colorful cartoon world.