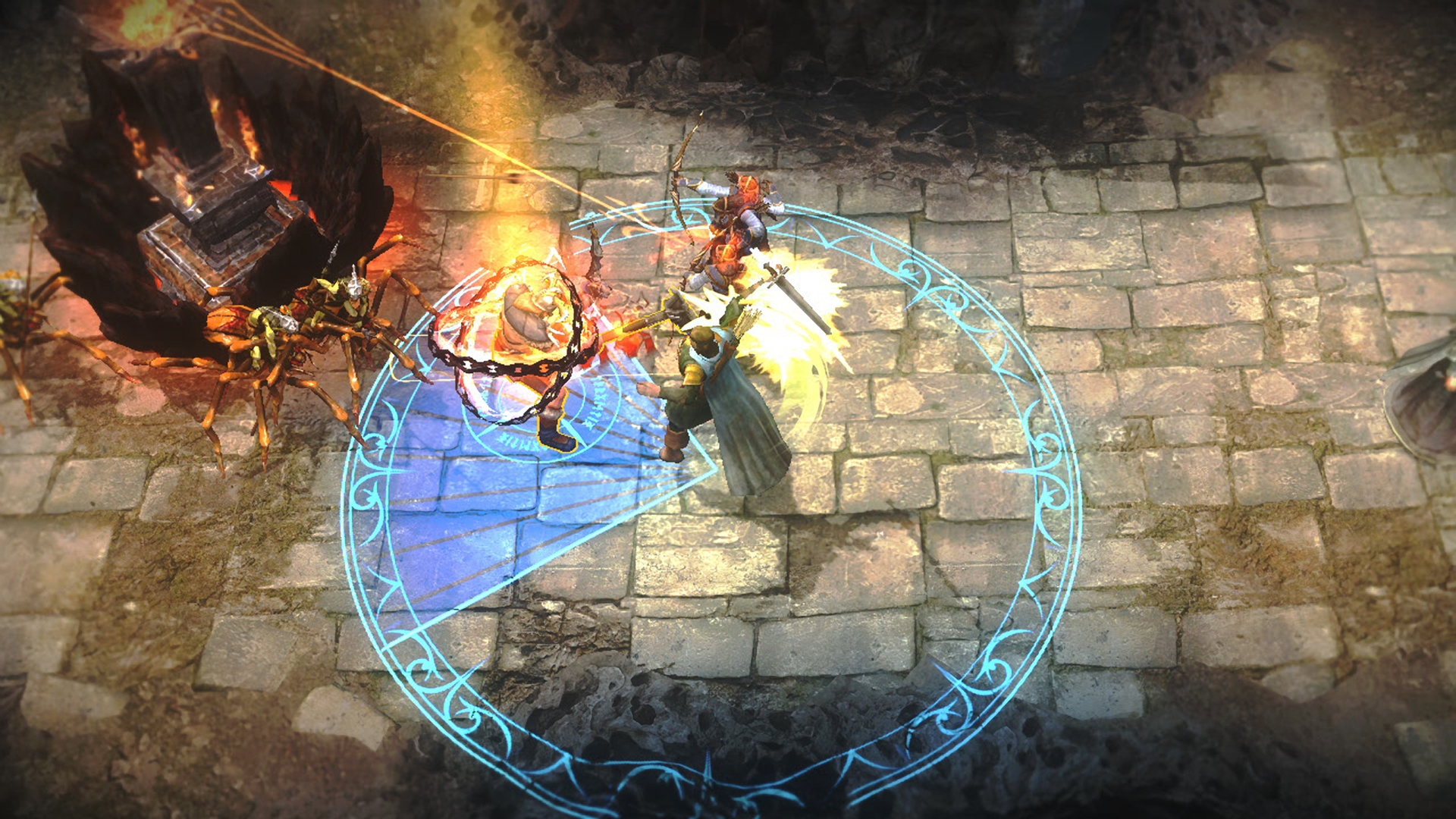 When I saw Guardians of Mid-…in the title, I was hoping it stood for Mid-Atlantic Wrestling, and instead of soldiers and monsters, the game would contain “the Boogie Woogie Man” Jimmy Valiant going to war with Sir Oliver Humperdink’s faction for smashing his radio and preventing “Boy From New York City” from being heard. Instead of being a crazed bearded man, however, you’re a guardian (who may resemble a crazed bearded man depending on the one you choose) with a slew of soldiers under your command ready to be slaughtered with a goal of destroying enemy towers, protecting your own, and leveling up by skillfully killing lower-end foes to build up to having the power to (relatively) safely defeat giant monsters.

Tower defense games aren’t usually my thing unless plants or zombies are involved in some way, but GoME is surprisingly fun. Going into this, I expected to be overwhelmed by the controls since these online RTS/tower defense games are usually seen on PC and PC-to-console conversions for things like that can be tricky at best and terrible at worst. Thankfully, the interface is user-friendly and after a brief-ish tutorial that takes about 15 minutes, you’ll be ready to go online and fight players from all over the world. Doing so will also net you Gandalf the Great, so beyond the need to complete the tutorial to prevent certain death, you’ll want to do it to play as him. 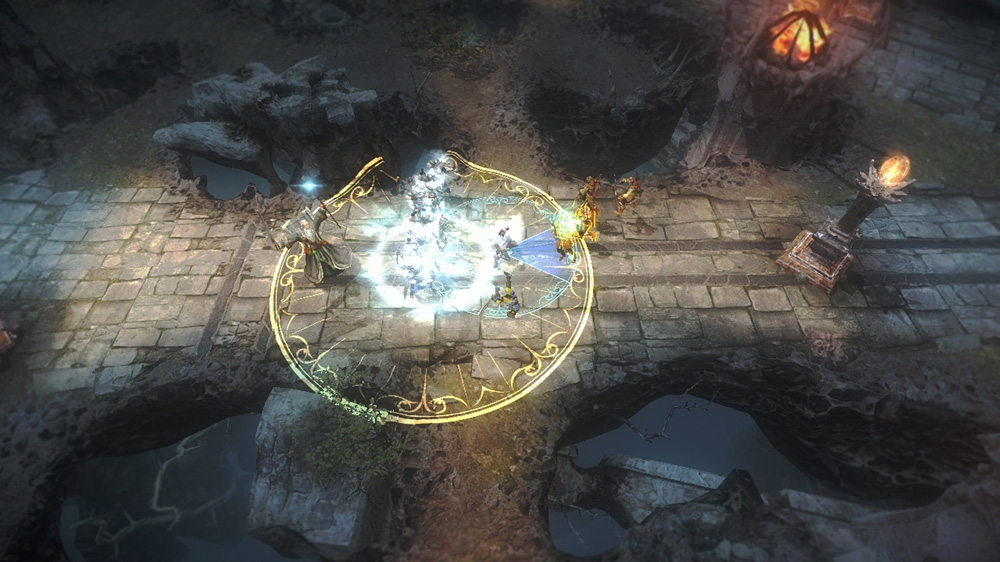 The controls are kind of complicated since they use so many buttons and rely on context, but their use is separated into particular sections of the game to make things a bit easier. You’ll always use the left stick to move around and R2 to do a basic melee attack, but R1+L1 can either help level up your shrines, towers, or soldiers depending on what you’re near. Designating a tower to become an attack tower is possible, but you’ll want to make sure it’s able to guard a healing tower or else you could easily wind up losing both. The d-pad is used to select spells, while their corresponding face button is used to activate them. Every spell has its own timer, so if you’re in a tough battle, you’ll need to make sure to send enough soldiers in to do damage to weaken the enemy troop(s) before you can launch your attack. If it’s a low-end foe, you can just try joining in, but that tends to be a great way to have your own health whittled down to next to nothing.

If that happens, you may need to retreat, regroup, and hope for the best. Sometimes, that involves you finding some power-ups to bring your health to a decent level. If it does, you’ll have to be sure to not make the same mistakes again or you’ll surely be in a worse spot. Not only will you have to retreat again, but you may not have a healing power-up nearby. Your attack radius is also something you’ll need to keep an eye on since it takes so long to do a spell, being lazy and only doing it to 1/3 of the available enemies is inefficient. You can take out a couple of weakened foes with a perfectly-placed melee attack, but if you want to take out a whole set of enemies, you’ll have to pay close attention to where you are in relation to them and make sure that they’re always properly lit up by your attack radius meter. There’s a lot of depth to the combat and thankfully, your commands are executed  exactly when you want them to be. 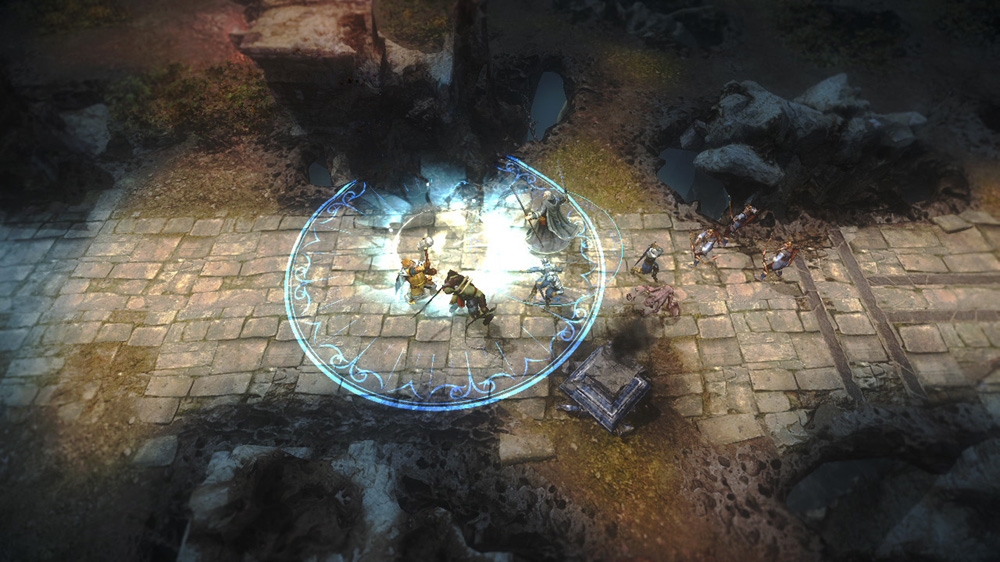 Given the online nature of the game, it would be crippled by poor online coding — luckily, that’s not the case here. Online play is as responsive as it’s going to get, although the wait times to actually get into a match can be rather long. The wait is well worth it though. Once you find a room, you’ll be able to take part in epic battles with three sets of towers being defended at once with an all-online set of soldiers on each side. Death is inevitable, but something you’ll want to avoid as much as possible each your wait time between death and coming back to action is increased with each one. An upside to this is that the battlefield can be scoped out via the right stick, and you can spot weaknesses. Things like smaller shrines without soldiers nearby may not be easily seen on the mini-map, but become quite clear when a closer view of things is possible.

Visually, GoME looks fairly good, with no slowdown unless it’s a rare instance of lag online, and has a ton of things going on at once — including a slew of spells with some nice lighting effects. The animations are also fairly decent and strike a balance between being elaborate and being fast enough to not cause wasted time on the battlefield. The audio isn’t quite as impressive. I’m all for horns and medieval-style music, but the stuff in this game has a generic sound to it that doesn’t quite match the epic battles. 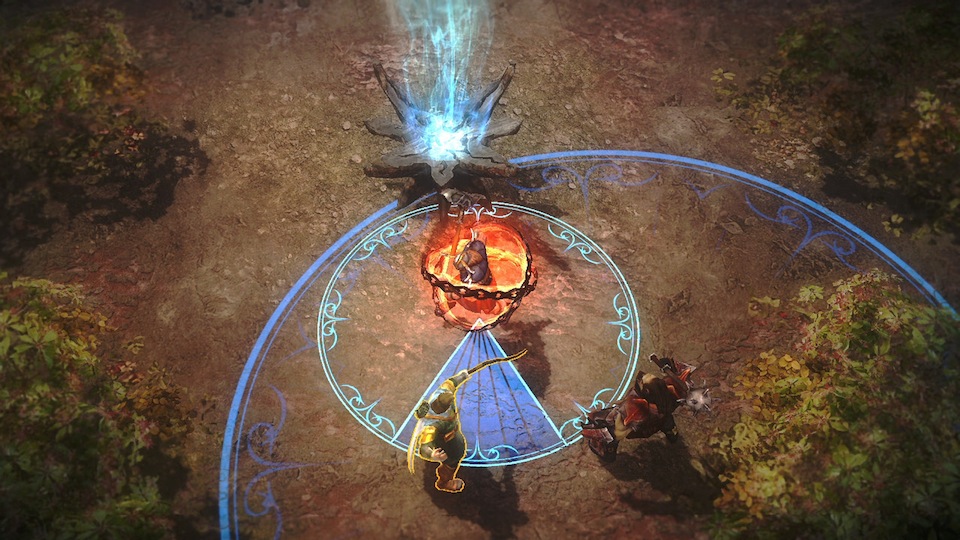 Guardians of Middle-Earth is a very pleasant surprise. A well-crafted title that fans of either RTSes or tower defense games will enjoy, the season pass setup ($14.99 by itself, or $29.99 with the full game via retail) ensures that new content will be coming for quite a while to this already jam-packed downloadable title. Those in the mood for a relatively easy to learn RTS-style game or with Hobbit-fever will find a lot to like here.