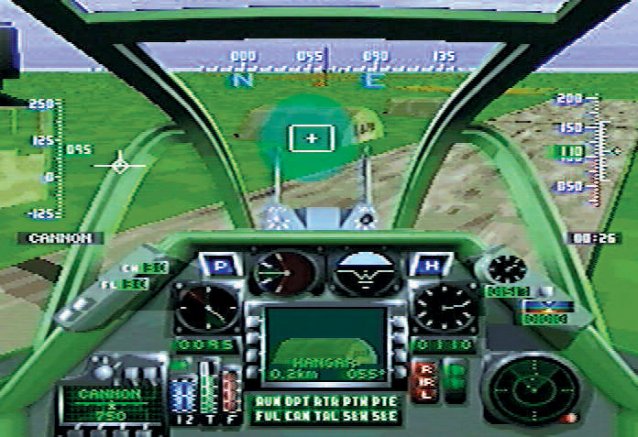 Some games are timeless; they spit in the face of father time and live each day with the same beauty and grace they commanded since their initial release. Gunship is not one of these games. Originally released on PlayStation in 1996, Gunship is a port of the Amiga title Gunship 2000. It was groundbreaking for its time, a 3D helicopter simulator that tried its best to recreate the strategy and action present in real helicopter duels. But time has not been kind to the PlayStation game, and despite a decent opening cinematic, I was ultimately engulfed by the mediocrity and dullness of this “classic.”

Gameplay comes in two flavors: the arcade style QuickFire, which lets players choose from four levels to blast anything that moves, and Simulation Mode, where players are assigned sets  of objectives to  complete and command a range of helicopters as they eliminate enemies throughout Europe and the Persian Gulf. The only real difference between the two is the laughable attempt at a story in Simulation Mode, where you earn promotions and medals based on your performances and progress through a series of missions devoid of any real narrative motivation. It all makes for a forgettable experience that is undeniably bare in comparison to modern offerings. 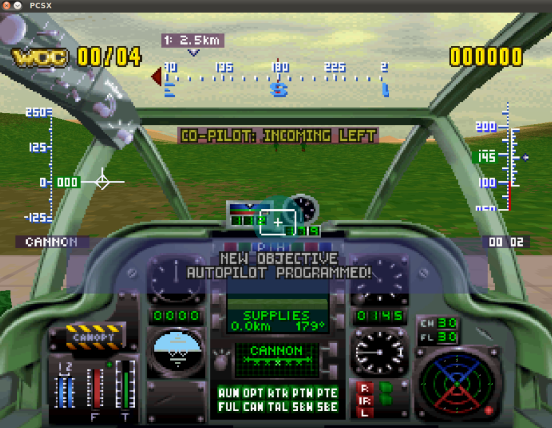 Visually, Gunship is a mixed bag. The default, first-person perspective  places you in the cockpit surrounded by all sorts of realistic dials and instruments, which look great. Unfortunately, they also all but blind you from the outside world, and when you can’t see where you’re going while flying a helicopter you’re usually in a bit of trouble. Switching to the third-person “Chase View” fixes that issue, but also highlights the blocky and bland landscape that composes the game world. What may have been deemed realistic in 1996 is barren and uninspired by modern standards, and the terrible draw distance emphasizes the harsh stain of age this game carries.

Gunship was originally released on the analog stick-less PSOne, and unfortunately this port does not adopt the modern standard of twin-stick control. Instead, the D-pad is given the responsibility of not only moving your helicopter, but aiming its weapons as well. The setup is far from intuitive, and the lack of a fluid aiming system makes for an infinitely frustrating combat experience that is only magnified by the insipid visuals. Controls are one of the most important and fundamental aspects of any game, and Gunship‘s misguided implementation is a boon that cripples the experience from start to finish. 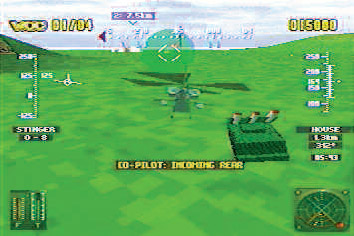 Even once you get past all the visual and control issues, Gunship just isn’t fun to play. I found myself flying unopposed for minutes on end, and when enemy units are the only interactive aspect of the game that’s pretty much inexcusable. When the bogies finally did show up, the game slowed down so much I thought I’d just flown into a jar of honey. Of course, it feels great to shoot down enemy helicopters, or obliterate a truck convoy, but landing hits was so sporadic any sense of reward was robbed by the sheer feeling of luck involved. Top that all off with a co-pilot that won’t stop spewing the same information about my surrounding friendly units and Gunship left a decidedly bitter taste in my mouth.

But it’s not all bad news for Gunship. There’s a nice amount of depth and strategy in the selection of weapons afforded to outfit your chopper for each mission, even if the menu screens are woefully uninspired. The mission briefs also feel very official, detailing the objectives, visibility, temperature, and other information an elite pilot would need before takeoff. Sadly, these meager positives cannot deter the overarching mediocrity of the game, and ultimately fail in salvaging this flaming pile of wreckage. 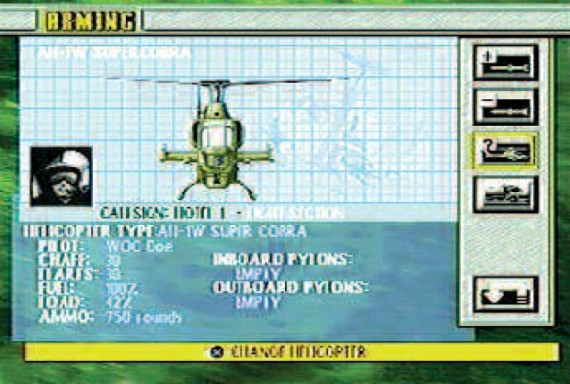 Apart from nostalgic indulgence, it’s hard to recommend Gunship. The controls, visuals, and mechanics are outdated, and what may have once been a tolerable experience has become completely obsolete and frustrating. If nothing else, Gunship is a showcase of just how far videogames have progressed in the last 20 years, but you can do much, much better for $5.99.