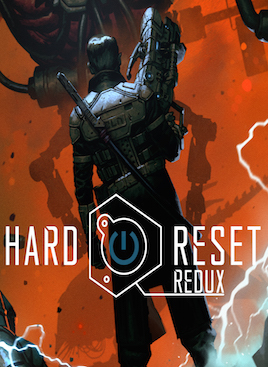 There’s a word that’s become associated in recent years with releases intended to refresh or reintroduce previous ideas onto new platforms. The word of course is remaster; that intended sub-title meant to suggest (true or otherwise) a game has been, if not rebuilt, reconfigured to an extent to meet current consumer standards. Now obviously, you won’t find this particular word following this year’s re-release of Flying Wild Hog’s Hard Reset. Redux is the chosen word for the studio’s cyberpunk-leaning, first-person shooter. But the intention remains the same; at least, going by most notorious “remaster” standards, Hard Reset Redux in some ways feels like an upgrade but doesn’t quite end up feeling like a complete overhaul. If anything, while it maintains a lot of what made the original release entertaining, there are still plenty of moments that prevent its supposed upgrade from feeling considered or substantial.

That’s not to say there are some notable additions to the in-game lighting and use of shading to give the game’s aesthetic that added grittiness, but there remains a sizeable reliance on low-res textures and amateurishly-made user interfaces to fill the gaps and even casually wading through, their presence is often hard to miss. Even the structural integrity of the game, by way of its collision detection, can conjure a few erratic moments in parts. The most notable attention in visuals though comes in the game’s arsenal of weaponry — be it the dirtied 80’s inspired feel of its conventional weapons, or the bulky over-abundance in the energy-based equivalents. At a distance, the difference Redux brings overall is notable enough and while the overall presentation underpinning this isn’t the most well-aged of concepts — especially within the FPS genre; the game feeling like an experience that would fit right at home at the turn of the millenium, rather than at its sixteenth year — the perpetual night of the game’s sprawling cyberpunk setting features some nice contrasts of industrial grey’s to the multicoloured neon littering the many courtyards.

Sadly the main story behind the single player campaign is far less memorable, if equally noticeable in its flaws, and comes across even more aged than its level design. Anyone who’s played (or even sat) through the most audacious of action pieces will work out the supposed good guy’s/bad guy’s will at some point reveal themselves as not what they initially appear…long before the supposed plot-twist actually takes hold. Predictable yes, but it’s aided a little in the game’s use of comic strip-styled imagery — hand-drawn visuals working as the basis for cutscenes, attempting to flesh out what little detail is given regarding the story. But with such vague names as The Corporation, you’d be forgiven for thinking the game had taken a few [too many] pages from vanilla Destiny‘s story-telling. More so, while it’s easy to forget about everything taking place around you from a story sense, it’s not so simple in ignoring what is some awfully monotonous voice acting and, at the very least, a rather canned deliverance of one-liner’s from the main character — some sequences even feeling hurriedly edited and chopped together. 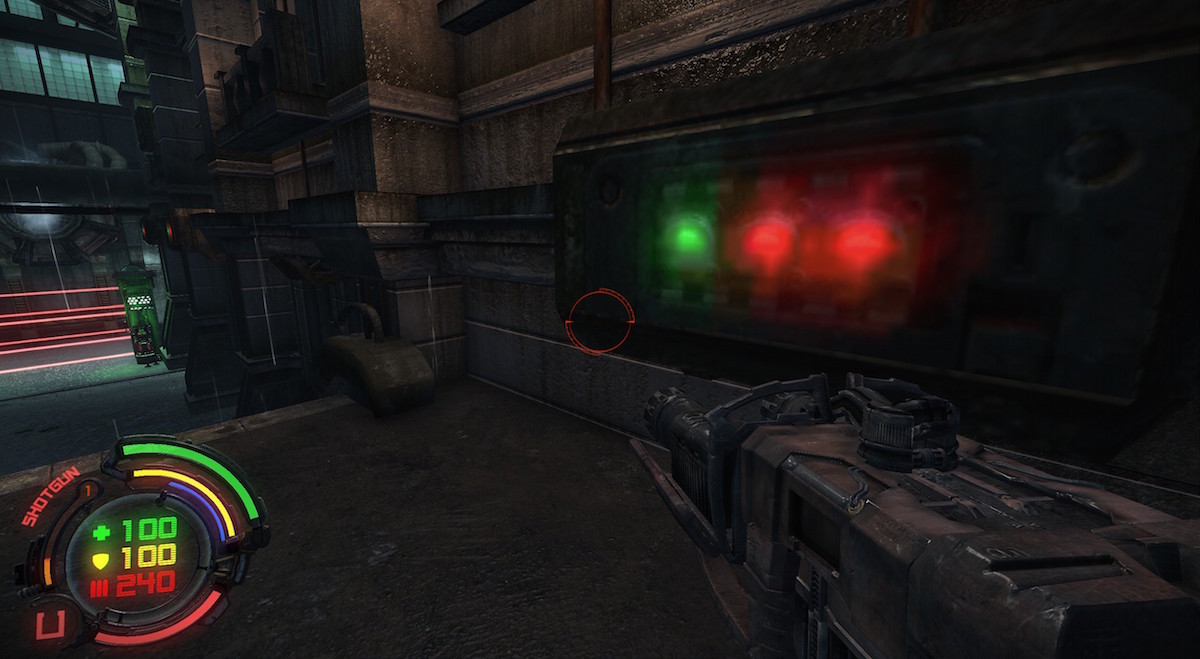 Fortunately for Hard Reset, the gameplay is what stands as the real meat and majority stake in the intentionally over-the-top (if a little corny) action and the way the mechanics for both shooting and manoeuvrability feed into one another, performs surprisingly well. Paying homage to some of the best first-person experiences out there — be it DOOM, Bioshock, even Metroid gets a shout-out in parts —  Hard Reset is all about making use of the entire length and breadth of the open, geometrically-simple spaces while continually shooting your way through hordes of robotic or cyborg foes at every opportunity with the variety of weapons at your disposal.

The first notable and unique difference to this play-style template however, comes in the form of environmental objects that, like your weapons, come in two forms: explosives and electrical machinery. It’s entirely optional whether you decide to use these neat additions, but given the chaotic spur of the game’s latter periods, taking advantage of an object’s splash damage and placement become critical in getting the better of the wide variety of enemies on show — enemies that range from miniature self-destruct bots, to missile-firing goliaths, to humanoids that can strike at long-range. The emphasis, while not entirely based around movement, remains keeping a close eye on proximity and the tools currently at close hand. 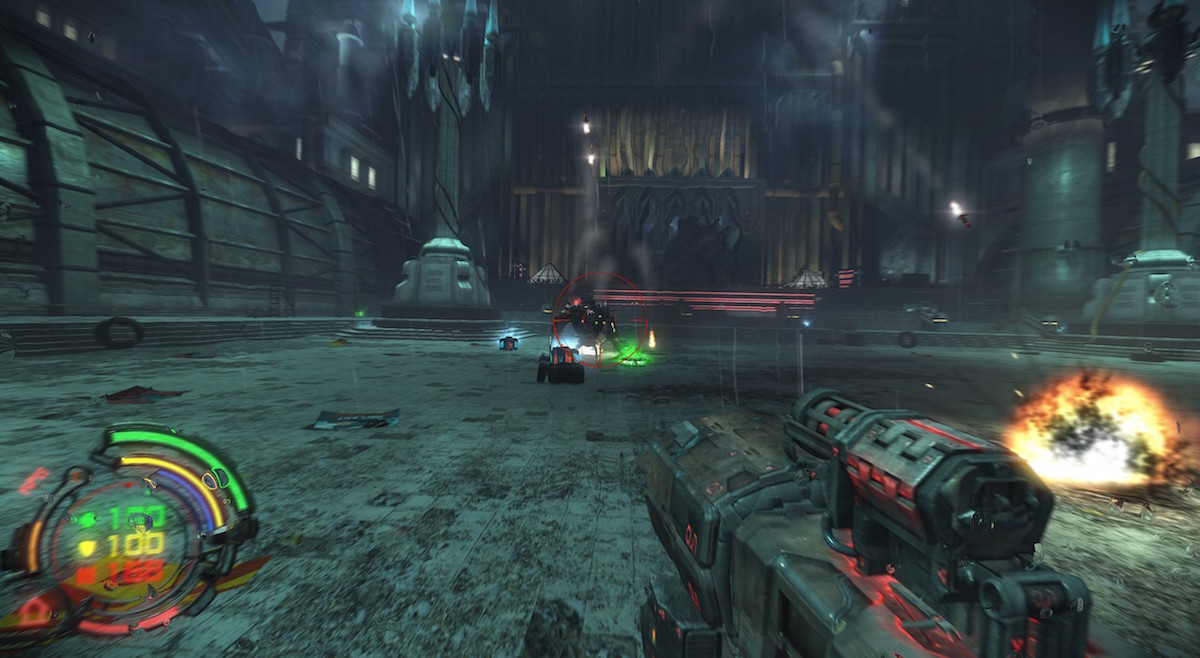 The second feature, which ends up being the more memorable of the two, is your player-character’s dodge mechanic, enabling you to quickly evade incoming fire and as such, allows you to pull off stylish chains of moving in-attacking-dodging-attacking again ad infinitum. It’s a simple concept with far lasting addictive qualities and adds much-needed engagement to what is essentially a glorified horde mode. But it doesn’t take long for you to realise you can essentially spam the dodge button to enable you to move a lot quicker and before you know it, Hard Reset‘s DOOM-like mentality finally kicks into high gear.

As noted, while most of these arena settings are designed with pretty much the same pre-set physics — with carefully allotted red or blue-branded objects indicating something can be blown up (and subsequently harm you too should you get a little too trigger-happy) — it’s easy to forget the simplicity of the surroundings when the combat set-up is so simple to get to grips with yet Redux’s difficulty offers enough of a risk to prevent players endlessly spraying ammo and, at the very least, invest in a little strategy from time to time. 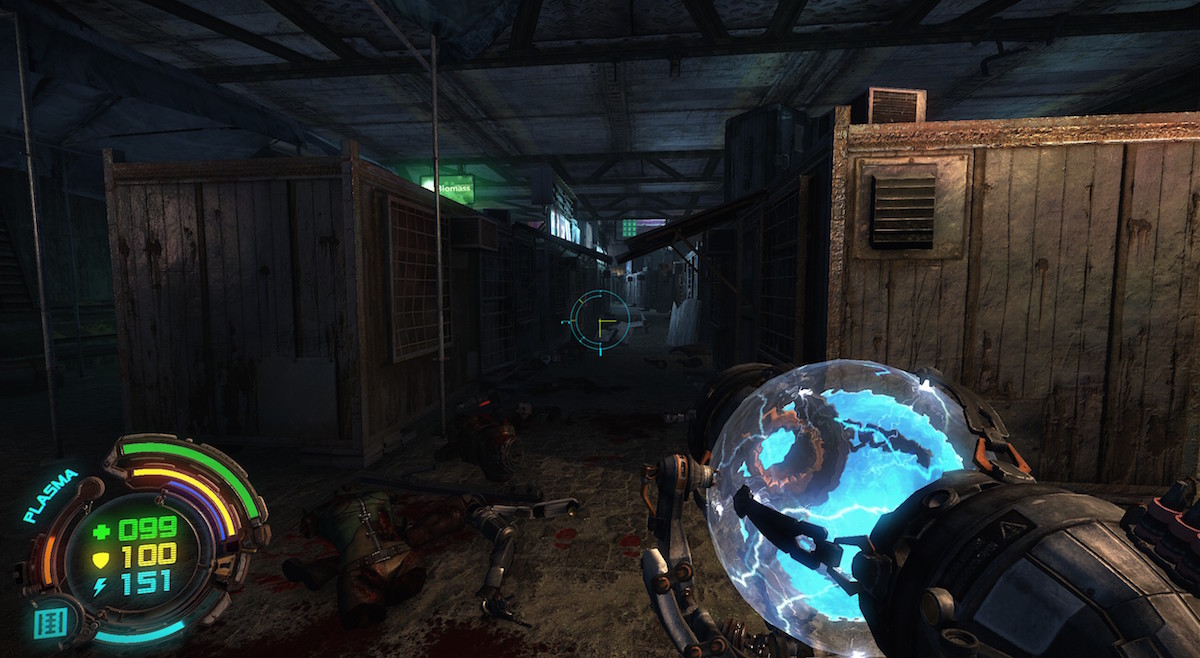 You have the option of course to expand your arsenal as you progress by way of the game’s upgrade system, acquirable through an XP-style bar and fulfilled through terminals dotted about the World that play out, neatly, like holographic storefronts with the player having to turn and angle their perspective in order to choose the desired upgrade. There are two ways, in-game, to fill up the meter: by either picking up currency, often tucked away in corners, or by racking up combo kills via the aforementioned environmental objects. Weapons (save for a blade acquired later on) remain aligned to either the conventional or energy-based category — with alt-fire attacks included as possible expansion — but regardless of which weapon you use, all the game’s ammo runs on a regenerative system that, while slow to recoup, prevents you for ever running low.

Like health, ammo is charitably offered throughout and given the sizeable presence of enemies around nearly every corner, the over-abundance on offer doesn’t, more importantly, cheapen the experience. Sharing similar results with the combat, the relation between health and difficulty comes away feeling thoroughly considered and for a game that is heavily reliant on these short bursts of adrenaline, it’s pleasing to find that even in later periods, the structure and set-up remains as lively and as enticing as it does on first go — often copying, for good reason, the DOOM (or perhaps Halo as well) philosophy on keeping moments feeling heavily player-reliant and/or player-driven; deprived almost entirely of scripted exposition or elements that snatch control away from the player. 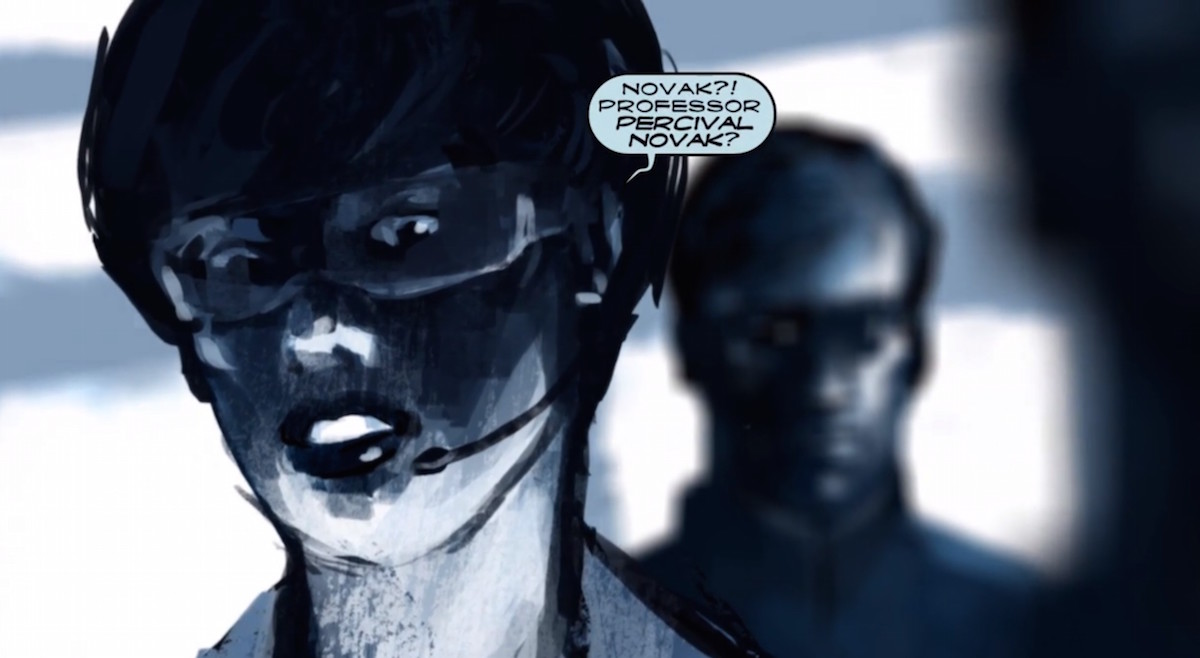 There’s no getting away from the somewhat lacking visual fidelity and there will be plentiful moments where you stop to [mistakenly] consider you’re in fact playing a first-person shooter from the circa-2000 era, let alone circa-2011. But what Hard Reset Redux lacks in graphics and contemporary design, it more than makes up for in terms of gameplay and how that alone pulls the game up from a potentially almighty tumble — winding up, instead, as a nice addition to those beloved fast-paced, manically-engaging shooters we’ve come to know and love. It may not be the most notable or even celebrated of names, but it’s pleasing to see even the least-talked about shooters such as this one given a second moment in the spot-light. For those who take kindly to games that are as much about agility as they are indulgence in many an unfolding set-piece, Hard Reset Redux might just be one to check out.