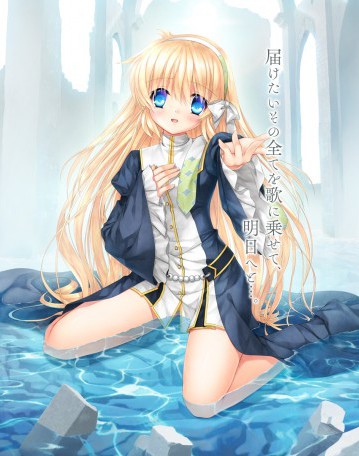 Some folks come to video games expecting action-packed excitement. Others look for titles to make them think through logic puzzles or even terrify themselves. Yet, for some reason, games that make you cry aren’t typically desired by mainstream fans. There is an audience for highly emotional titles, though, and developer VisualArts have been making games to cater to this need for years now. Visual novel lovers should know them by their works such as CLANNAD, Tomoyo After ~it’s a wonderful life~ and Planetarian ~the reverie of a little planet~. Their latest release in both Japan and the United States is Harmonia. Unlike some previous releases which they brought west via Sekai Project, this one was self-published to Steam. Because Harmonia is such a new game, visual novel fans weren’t sure what to expect from the storyline or the translation quality.

Harmonia begins as our protagonist wakes up in the middle of what appears to be a long since deserted factory. Although he has no memory of how he got there, he quickly pieces things together. The factory once produced Phiroids – humanoid robots which could be considered both servants and companions to humans. Upon looking at his own right hand, he finds that it is completely mechanical. Aside from where the skin has ripped off, however, everything else about him appears completely human. He hides the fact he is a Phiroid by covering the hand and then seeks out humans to serve, as is a Phiroid’s duty.

Once in a tiny, post-apocalyptic town, he meets a young woman named Shinoa who takes him in and names him Rei. The two get to know each other, and Rei in particular finds himself learning about emotions and helping other townsfolk thanks to Shinoa. The storyline gets a bit stranger when other characters are introduced, such as an ever-angry shopkeeper and child who cries continuously while sequestered all alone in a library. Despite being a rather short visual novel, this small handful of characters receive a great deal of development. Over the course of interacting with them, players find themselves getting weirdly attached to the townspeople. Of course, this is needed for VisualArts to eventually pull on everyone’s heartstrings by the end. 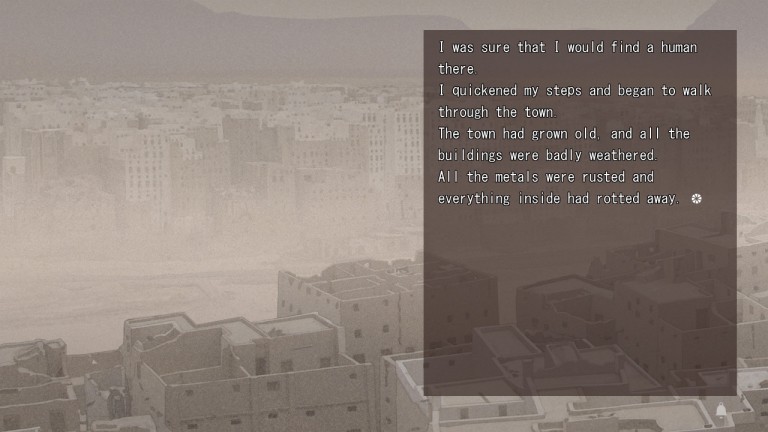 There are a few important aspects to note for folks who have played previous VisualArts games or are at least familiar with visual novels. The main thing is that this is a short story that most could finish in an afternoon. For me, it took three hours to complete the storyline. Given this is a kinetic novel, there are no dialogue choices to make which otherwise lead to a bit of replayability. The single tale is worth reading, but not quite as emotionally impactful as other titles in their catalog. After all, even the best authors would probably have trouble making people weep over characters they only knew for a couple hours. That’s not to say the writing is bad by any means. There is still an emotional impact from all that occurs.

With that said, the translation feels slightly off. No, it’s not due to typos, as there are barely any present. Harmonia dodges the literal translation trap which leads to games with highly accurate translations but dreary writing. However, the game falls somewhere in the middle, with text that makes total sense in English but does not flow as poetically as it probably was intended to. One smart choice on the translator’s part was leaving Shinoa’s unique slang. Her usage of colors to refer to emotions, as well as her adorable “powapowa” phrase add to her characterization better than if her uniqueness had been translated away entirely. 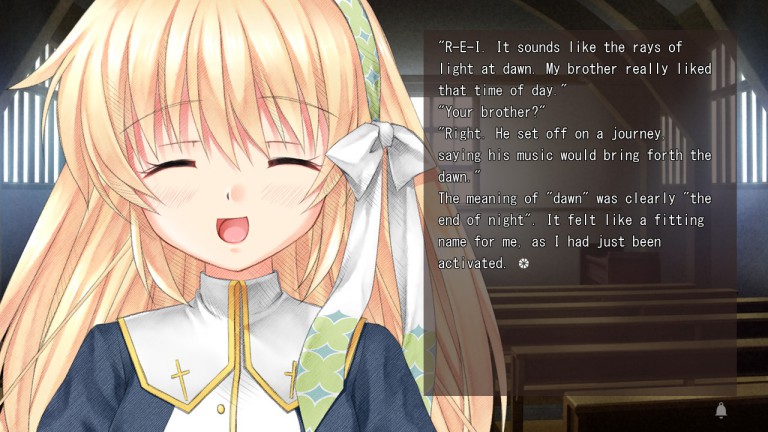 Just like other games by this company, Harmonia features a truly gorgeous appearance. Each character sprite looks almost as if it was carefully drawn and colored via colored pencils. This high quality “sketch” style emphasizes the frailty of the characters and their world. It also just looks darn good, though there’s not much animation to speak of for the sprites. CG scenes also retain a fantastic look. Despite the short playtime, you’ll see a good handful of beautiful CGs scattered throughout the tale. Music maintains the atmosphere created by the storyline and artwork. Generally mellow, it also conveys moods such as sadness, loss, and joy. Japanese voice acting is also included for all characters (aside from Rei).

One weird thing about Harmonia is its UI. Normally, there’s not much to fuss about regarding text options in a visual novel as they’re very standardized. Somehow, though, this game gets it all wrong. The menu options are unusual, for one. Symbols such as a lock and bell are used which are absolutely nonstandard. Even after figuring out what the lock does (I still don’t know what the bell means), there was a whole other issue. Getting auto text to work was a chore – and it only seemed to function sporadically. If nothing else, auto text is a must, so the action’s finicky nature was certainly annoying. The default in-game text also caused an error message upon first run. Luckily, it was a simple issue to fix. 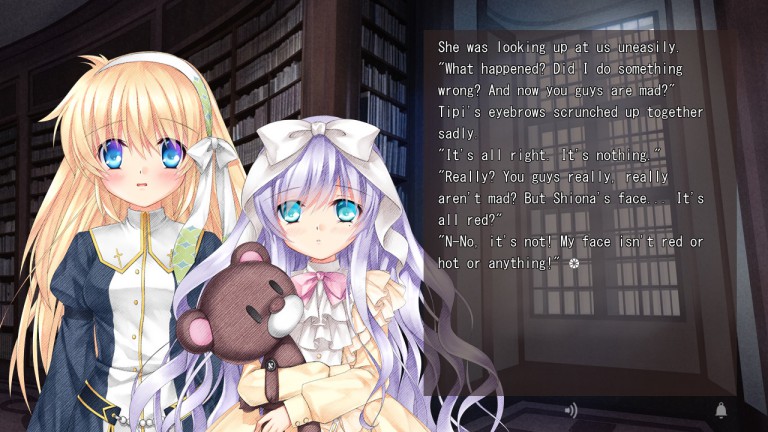 Harmonia is a bite-sized taste of what VisualArts can do with the visual novel genre. It is not the most emotionally intense of their releases, but still packs a punch in just a few hours of storytelling. Their skill with artwork, music and voice acting also shines through easily. Despite the lowered price and length, it’s obvious a great deal of work was still put into the production. Unfortunately, the ending also leaves something to be desired. Perhaps there are plans to create a sequel down the line or perhaps we just have to live with the ending as given. Those looking for a brief emotional interlude in their week may want to seek out Harmonia, but anyone looking for true emotional devastation in visual novel format should probably sift through the rest of VisualArts’ library first.