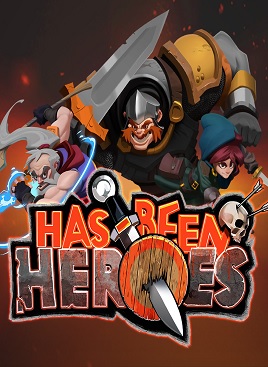 Ample points for originality goes to Frozenbyte for their latest title, Has-Been Heroes. There have been plenty of titles that use the elements found in this action/strategy/puzzle/rogue-like game, but there doesn’t seem to be any that have mixed them into a concoction like this. That originality serves to make a nice first impression, too. Components blend in such a way to entice a new player to give it more than a few runs. After the honeymoon is over, though, a game that leans so heavy into the rogue-like trappings needs to do something to maintain player interest. Regrettably, that is where this title falters.

Games like this tend not to need a story, but Frozenbyte did see fit to include a basic one. Broken down, a trio of heroes, worn out from repeated adventuring, are tasked with escorting a pair of princesses to school. Rock falls, everybody dies only to be granted a new lease on life by a deity who provides the princesses means of collecting souls. The party is sent back to the land of the living to undergo the quest again, all while hoping to shut down the machinations of a great overarching evil. It’s cute enough, though the cutscenes are told with so many knowing winks that one must wonder if the storyteller is experiencing a metaphorical persistent eye twitch.

The gameplay itself is initially engrossing. There are three heroes, with more that can be unlocked through completing successful runs. The battle screen is divided up into three lanes, each with oncoming enemies. To be successful at battle, players must try to plan ahead, as there are cool down timers for each character after they attack. Most enemies have a certain amount of blocks of stamina, which act as a shield, with each block requiring one hit to diminish. So, a rogue that does three strikes in one attack will knock out three blocks of stamina. The idea is to hit for the exact amount of stamina available, as this will stun the enemy. Go over the amount, and the foe will take some damage and get knocked back. In order to make the best use of this system, players must switch each character through the lanes. The twist is that the lane can only be switched immediately after the hero occupying the lane attacks. While a neat concept in theory, this mechanic can throw strategies out of whack. While one can often see upcoming enemies and sort out the next series of moves through copious switching during the automatic pause immediately after a character goes out to attack, the bosses like to switch lanes during battle. This can render even the best laid plans moot as the player is unable to devise a strategy for these moments. 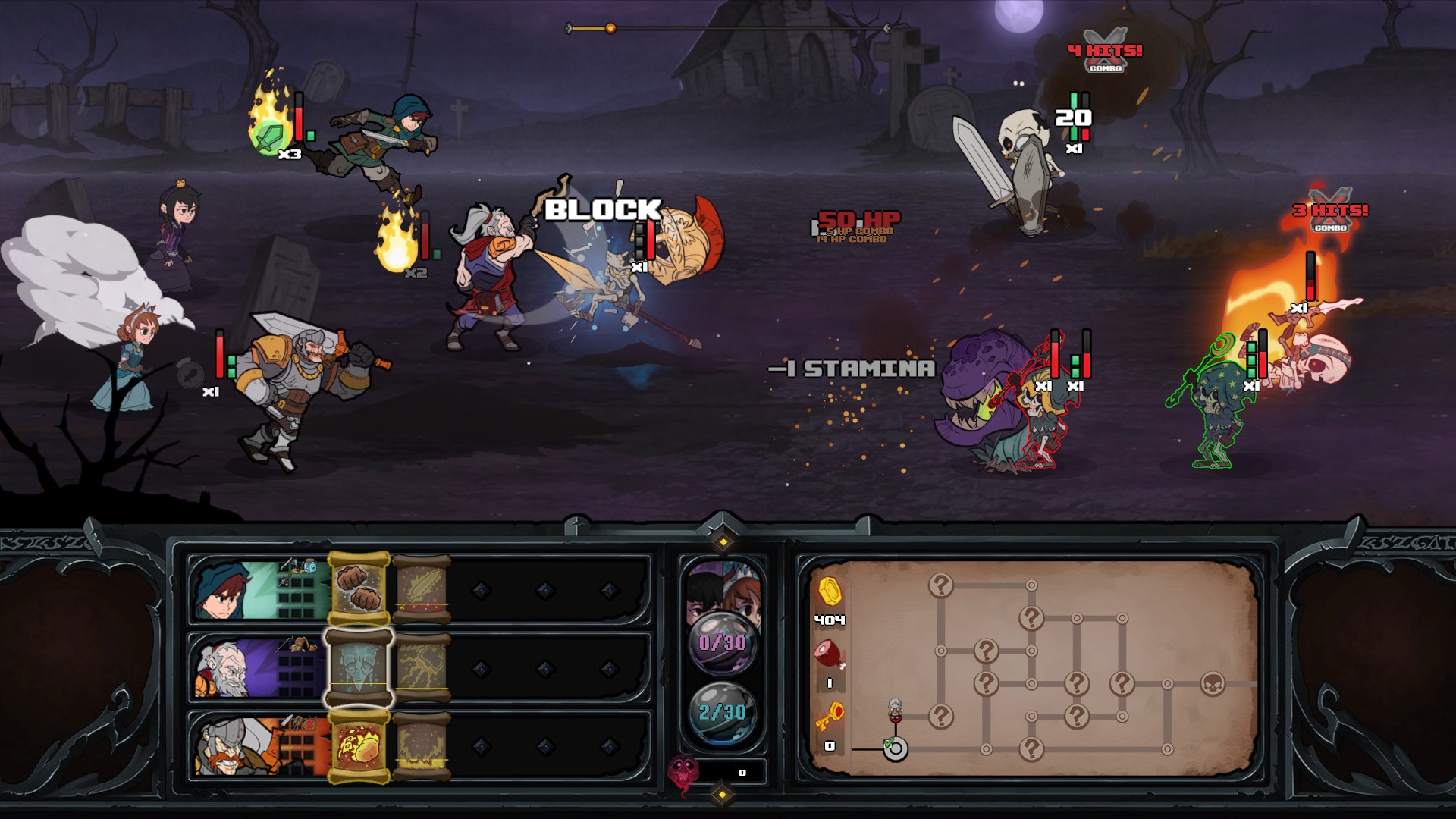 This last point, along with the complete randomness of what might be found while adventuring, forces the player to just wing it in battle. Even if everything lines up so that the “correct” series of attacks are executed, the player feels like it was pure luck as opposed to devious strategy. This is much less of an issue during normal battles as enemies tend to advance in a more predictable pattern. They might heal, make themselves immune to attacks, or other such dirty tricks, but it is possible to set up the attack orders to chain characters in a better matter. The only issue with the main battles themselves is that the fields can be flooded with enemies as successful runs are completed.

However, swarms of skeletons aren’t too big of an issue with judicious use of spells and skills. Each hero has a default spell that also operates on a timer, with more to be found from vendors in the world. In a true rogue-like fashion, what is found is entirely randomized, but even the basics work together in fun ways. For example, the Bard class has a water spell that does a small amount of damage, but gets the enemy wet. Throwing out an ice spell right after freezes the foe more effectively. One can also do things like using an easy to find vortex spell to group enemies together, and follow up with a fireball, lighting all of the creatures aflame. Mixing skills together like this is really where Has-Been Heroes finds its fun, and it is obviously a system that saw a ton of work during development. Honestly, it’s the best reason to keep returning.

One area that desperately needed a bit more attention is the enemy design. With the exception of the odd meat eating plant or boss, this is all skeletons all the time. Sure, they wear different outfits, but there are only a handful that really stand out from the rest. As the game goes on, players will be expected to prioritize certain enemies based on their speed and skills, but the lack of artistic variance makes it incredibly difficult to decide which lane should take precedence. 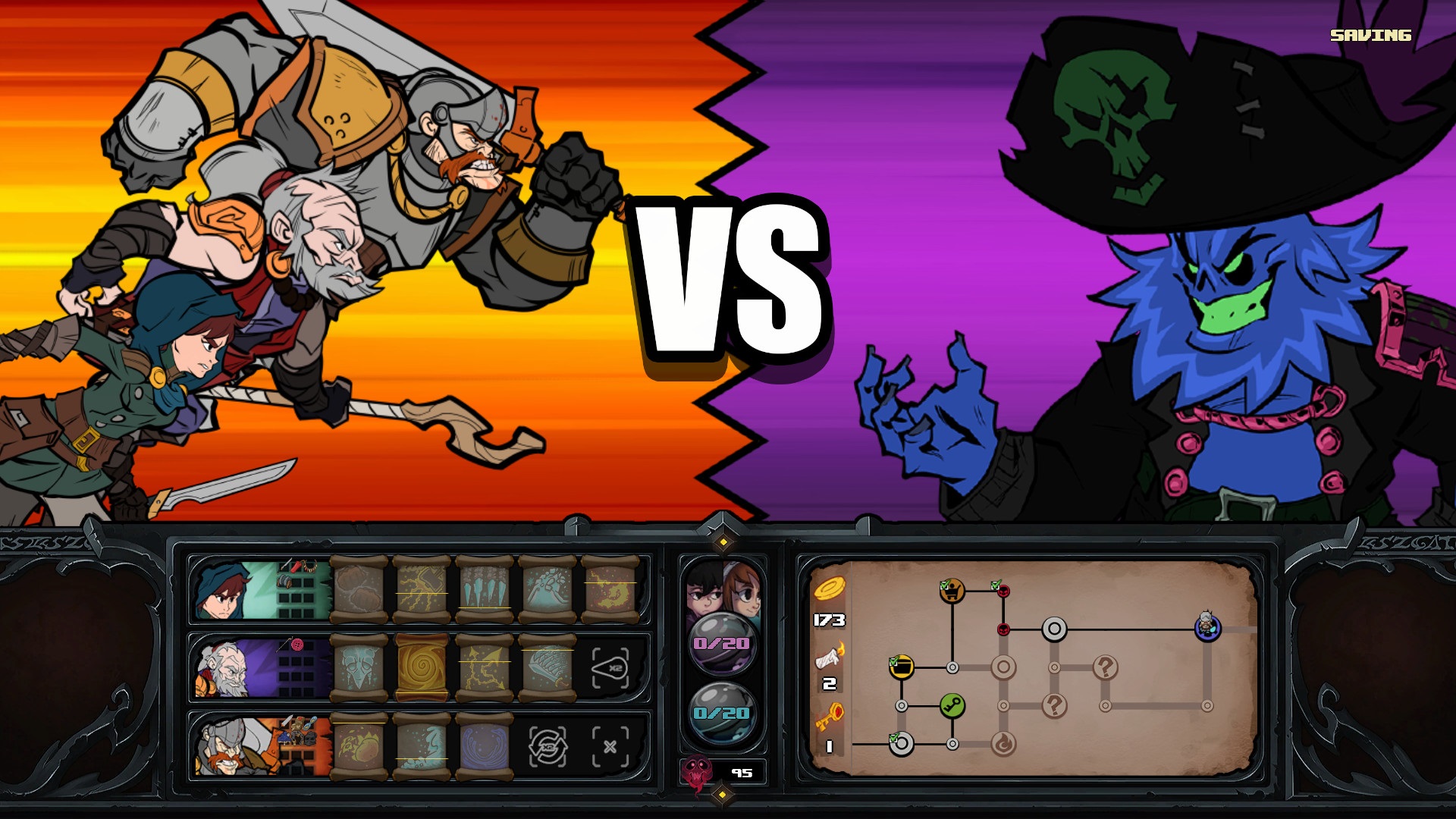 Despite all of these complaints, Has-Been Heroes isn’t a terrible time. Using skills in tandem to bolster their efficacy is, on its own, a reason to check this game out. The issues lie elsewhere in the design, making this a title to pick up for one or two runs before closing it down and doing something else. It does work in bite-sized chunks, which isn’t exactly a rousing endorsement for what Frozenbyte was trying to achieve. Should the developer want to revisit this concept in the future, the two best suggestions would be to add some real variance to the enemy art design and do something with how attacks are doled out by the heroes. Allowing lane switching when the heroes aren’t attacking would open up the combat in a way that is fun and there doesn’t seem to be a reason that this solution would remove the game’s challenge. As it is, Has-Been Heroes is fine for short bursts, but anybody looking for something that can eat away the hours should move on.