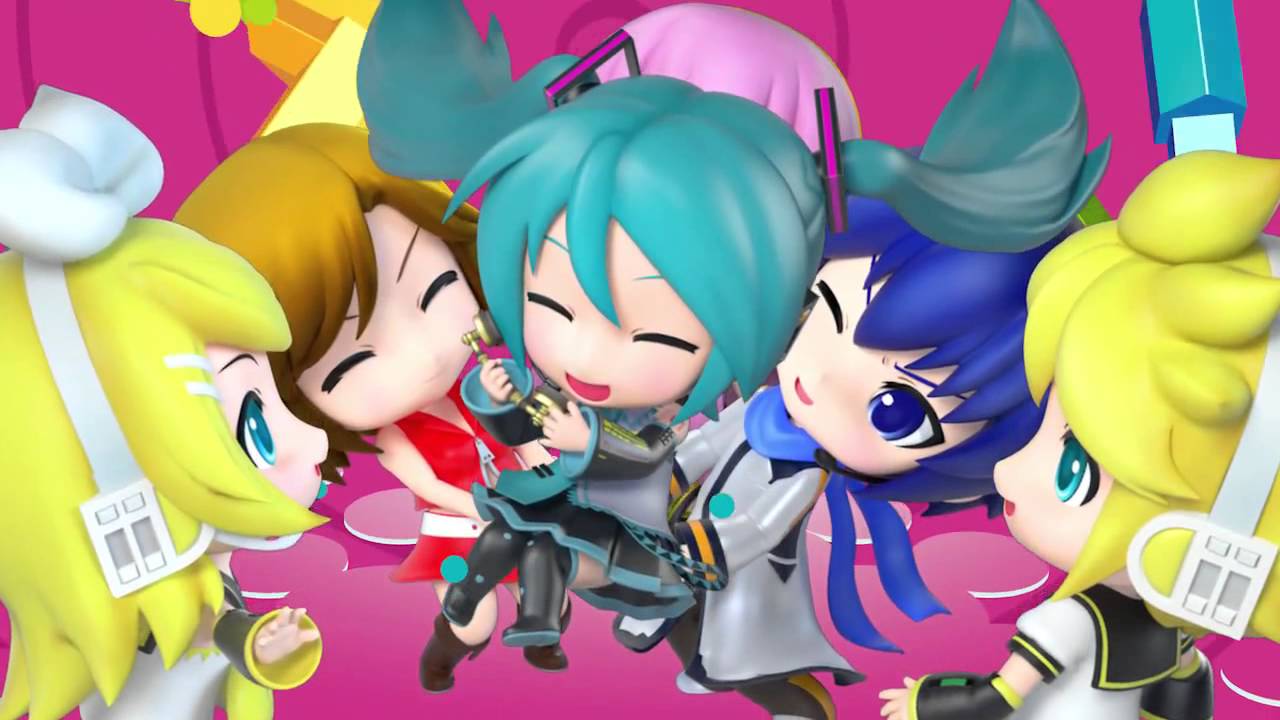 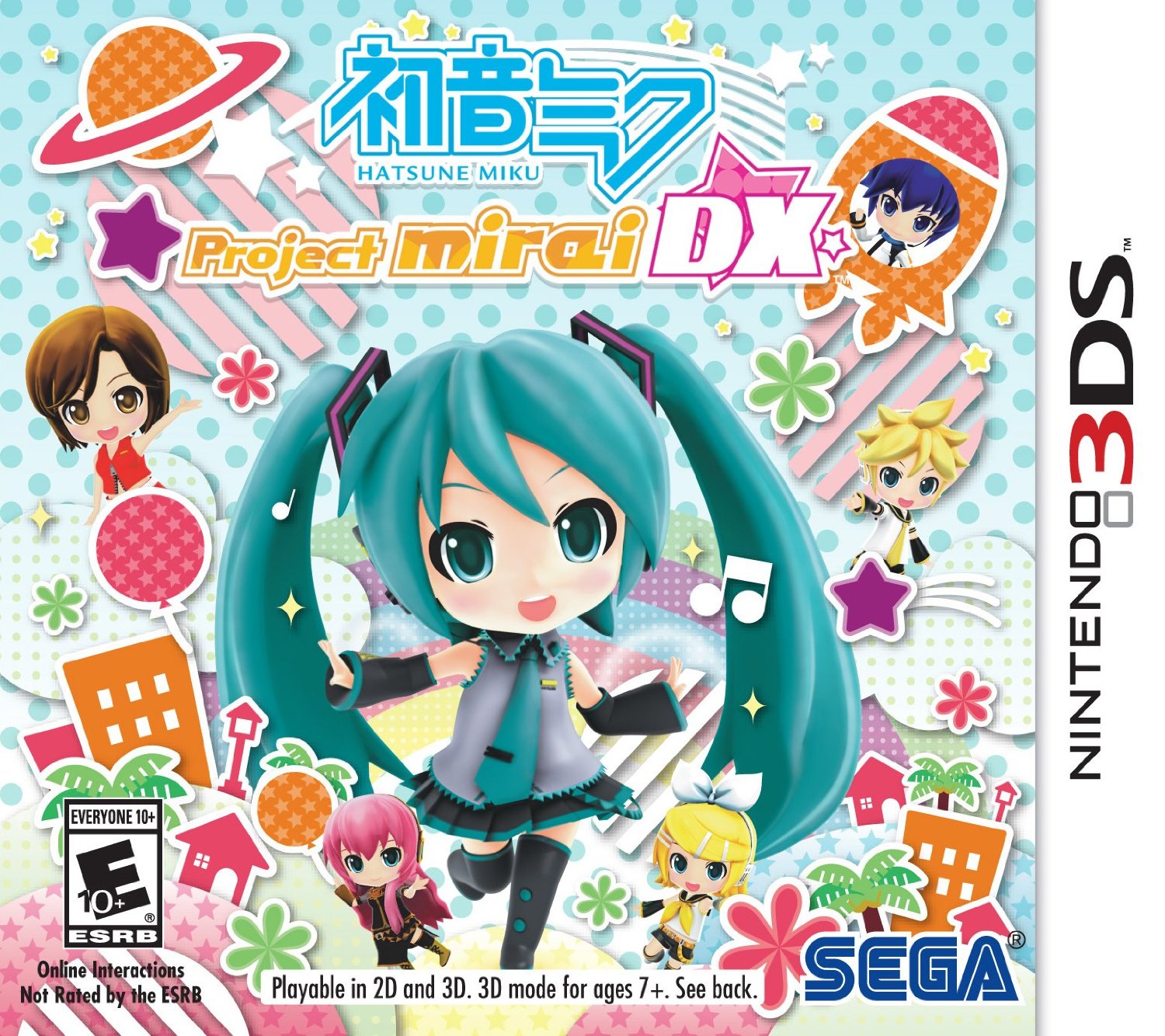 Music, more than perhaps any other art form, transcends linguistic and cultural barriers. It winds its way into your core and warms you from inside out, conjuring intense, often indescribable emotions. Digital diva Hatsune Miku is a perfect example of music’s universal magic; her vocaloid J-pop songs are conduits for unbridled joy and positivity, and capture a slice of Japanese culture well worth sharing with the world. The virtual idol’s latest game, Hatsune Miku: Project Mirai DX, continues this incredible work, but unfortunately, it trades accessibility for the technically challenging gameplay fans have come to associate with the singer.

Unlike the Project Diva F games released on PS3 and Vita, Project Mirai DX gives players a choice of play styles for each song. The new addition, Tap Mode, has players tapping color-coded sections of the touch screen along with the matching prompts on the top screen, mixing in directional swipes and the occasional spin here and there for a more interactive rhythmic experience. Button Mode, on the other hand, is more traditional, though still features some changes of its own in comparison to the Project Diva F series. Instead of button prompts flying in from all sides of the screen in choreographed patterns designed to challenge your focus, they’re all strung along on a single line, which winds around the screen in various shapes and at various speeds. Because their path is laid out before you, it’s substantially easier to prepare for each prompt as it arrives, and while you can artificially enhance the line’s speed to heighten the challenge ever so slightly, it’s still a simplified version of a rhythm game that is famous for demanding the most of its players. 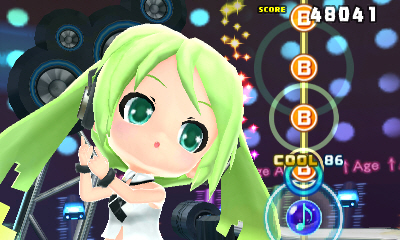 Miku’s 3DS debut is much more accessible than her past performances, making it the perfect entry point for new players looking to get in on the fun. Along with the simplified Rhythm Game modes, players struggling to keep up with the more difficult songs can cash in their Play Coins for special items that make the experience slightly more forgiving. Conversely, there are a handful of augmentations more seasoned players can employ as well, raising the stakes a hair or giving yourself less time to react to the prompts on screen. They don’t make a huge difference either way, but it’s a nice gesture to make the game a little more accommodating.

Project Mirai DX is at its best when it uses the lettered and directional buttons in unique combinations, often making for more complicated sequences than the predictable pairings of the Project Diva F titles. Sadly, however, this is a feature utilized far too scarcely, making the lack of an ‘Extreme’ difficulty setting even more curious. Adding a fourth difficulty level would not only make for a more challenging game as a whole, but also substantially increase the replayability of the game, as players would be challenged to perfect their performances on even more complex versions of each song. Tap Mode, while treated as an entirely separate mode with its own difficulty levels, is no replacement, as it’s clearly intended for more casual or less proficient players. There is no logical reason for Project Mirai DX not to have the same ‘Easy, Normal, Hard, Extreme’ difficulty gradient that was standard in the Project Diva F series, especially when Sega actually included an additional ‘MAX’ difficulty level for a select 6 songs. Those songs tease what Project Mirai DX could have been: the definitive Hatsune Miku experience. The goal –perfectly completing each song– is the same across each of Miku’s games, so leaving out that final difficulty setting robs veteran players of the culminating experience they’ve come to expect. Making the game more accessible to new players and appealing to those returning are not mutually exclusive achievements, but it appears Sega was unable –or unwilling–to find a happy medium with Project Mirai DX. 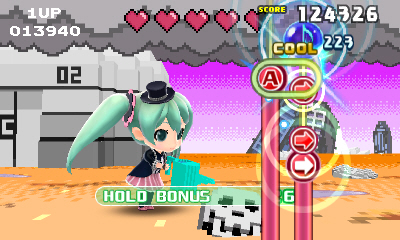 I ask for a higher difficulty level not out of some macho desire to prove my Miku mastery, but because I want to connect to my favorite songs on a deeper level. Being able to match my button presses to the most minute beats in the lyrics and music of a song makes me feel more engaged and invested in each track, and makes the experience more memorable and emotionally resonant. That rewarding challenge is what draws many players to Hatsune Miku games, and it’s disheartening that Sega failed to provide such a defining element of the series here.

Like past Miku games, there’s more to the experience than the flagship Rhythm Game. Project Mirai DX features a number of supplementary modes, including minigames PuyoPuyo39 and ‘Mikuversi’, otherwise known as the board game Othello. You can also hang out with Miku and her friends, though it doesn’t amount to much more than dressing them up in different outfits and feeding them snacks. It’s fairly passive and dull, but it’s a nice bonus for vocaloid fans. On the more substantial side is the Dance Studio, giving players complete control over the choreography of each song. Simple and Advanced editing modes make it accessible to all players, echoing the design philosophy evident throughout Project Mirai DX. 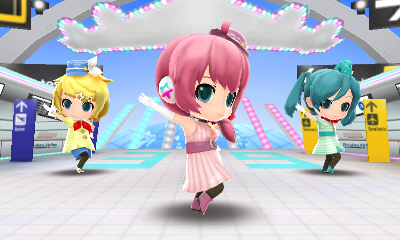 As solid as its mechanics are, Hatsune Miku: Project Mirai DX is one difficulty level away from greatness. Its simplified gameplay systems make it the most accessible Miku game to date, but it also sacrifices the fierce difficulty veteran fans have come to expect. Even so, the core experience is absolutely delightful, mixing a stellar track list with Miku’s adorable dance moves and infectious jubilation. There’s no shortage of content in Project Mirai DX, it’s just a shame that Sega failed to follow through on what could have been the best Hatsune Miku title to date.