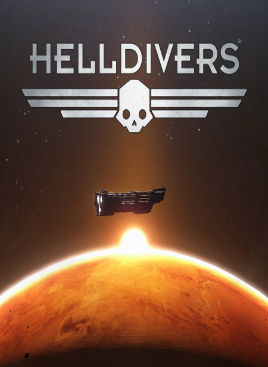 Back in the wonder days of the NES, an era that this particular editor admittedly was not on this planet to witness, games were heralded for their difficulty. From the simple to understand, yet generally punishing Mega Man games, to Ninja Gaiden, all the way to the infamously challenging Silver Surfer, tough-as-nails games were largely the norm. Now, we live in a time where games, for better and for worse, seem to hold your hand a fair bit more. Titles like The Order: 1886 guide players along a central path, saving constantly in the background, while never attempting to overwhelm, even on their hardest difficulty. Sure, some may find challenge in the latest AAA game’s single player mode, and more power to them, but it seemed that those days of thrown controllers, face-palms and nights spent playing the same level over and over again were long gone.

Now that a great variety, and increased level of accessibility, exists across the gaming landscape, gamers looking for a serious challenge have a multitude of head-slamming masochistic endeavors. Those seeking a punishing AAA title might lean towards Bloodborne or the Souls series; a bevy of insane platformers, like Super Meat Boy and Spelunky exist to satisfy those looking to get their 2D on. Difficulty seems to be celebrated again, and without this frustration renaissance, we might not have the opportunity to play hysterically difficult titles like Arrowhead’s Helldivers. When it works, this top-down, friendly-fire-heavy cooperative multiplayer shooter does everything in its power to smash you and your comrades into a pool of blood and guts, and this is nothing short of outstanding. Unfortunately, a number of network issues and a seemingly declining player count keep Helldivers from being everything that it can possibly be.

At first sight, it might seem like Helldivers is a progression-based game, what with it’s numerically-ordered missions, stage-based unlockables, and attempts to whittle down three separate alien societies. When you consider it in this light, every decision that Arrowhead Game Studios made has to be considered questionable, but once you use a different perspective, it’s easy to understand what’s going on here. Think of Helldivers as a multiplayer game in the vein of Call of Duty or Left 4 Dead, only with a dedicated numbered stage system and the ability to play alone. After going through the tutorial, players are able to select procedurally-generated missions on twelve planets in three alien-race-based realms, with each planet having its own difficulty and set number of missions. Each section of the galaxy features a single species, be it the armored, melee-heavy Bugs, the bullet-slinging Cyborgs, or the ever obnoxious Illuminate. The latter of these races is certainly the most interesting, as it features both invisible swordsmen and joystick-reversing psychic enemies that change up player strategies on the fly. 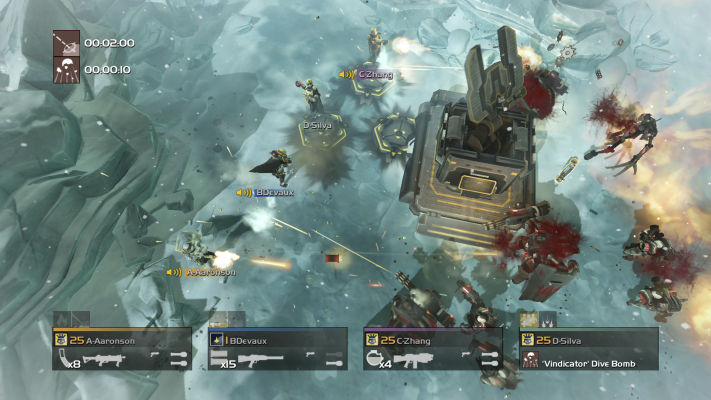 Players are armed with a primary weapon of their choosing, a secondary pistol, two grenades, and four stratagems of their choosing. The latter component is clearly one of Helldivers calling cards, as these offensive, defensive, and objective-based pieces of equipment are what change its gameplay from a standard twin-stick shooter affair to something dynamic and fresh. After pressing the L1 button (or the left trigger on the Vita), any stratagem can be called in with a series of Dance Dance Revolution-style directional pad inputs. Once these beacon-based airdrops are thrown down, players can receive any number of self-selected items, from a giant over-powered mech-suit with rockets and a Gatling gun, to ammunition packs, to a UAV that seeks out enemies and objectives, to a massive stationary turret. Without being able to properly utilize stratagems, there’s little to no hope of completing any mission outside of those with the easiest difficulties, so coordinating their placement and selection with teammates is of utmost importance. Oh, and it helps to mention that whenever something rains down from the sky, there’s a very real chance that it could crush an unsuspecting player to death. 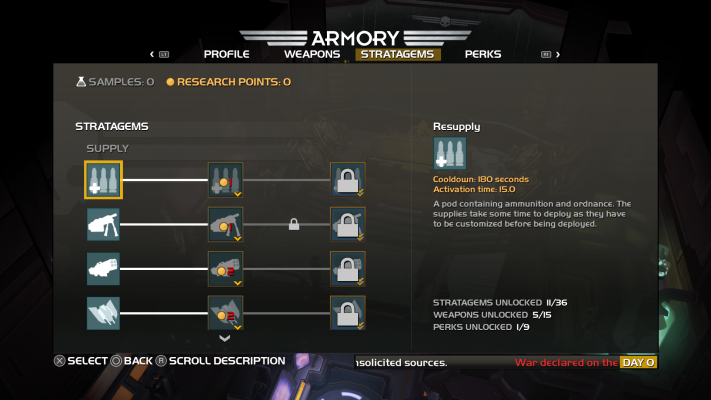 The latter point is part of Helldivers single biggest hooks: it’s back-breaking difficulty. Even a coordinated team of four is going to find trouble not dying on higher difficulty missions, especially the “Hell Dive” stages, which feature endless enemies and seemingly endless objectives. Friendly fire is always on, so in addition to attempting to kill foes while avoiding others, players have to take care not to fire too many bullets into their teammates. Stratagems can kill you, objectives exploding can kill you, even the map itself can kill you if you walk in the wrong direction without paying attention to mines or cliffs. Now, some might criticize a game for being so hysterically difficult, as frustration does have the potential to set in, but the logic behind every death never seems to wane. You’re always going to know exactly why you died, and thus know exactly how to prevent that same type of death in the future. The only frustration in a Helldivers mission comes when teammates are either incompetent or not paying attention, something that isn’t Arrowhead’s fault at all. The funny thing is, Helldivers is so brilliantly conceptualized, that players likely will learn important lessons so quickly that most, if not all, of the available difficulty settings will grow stale. If you’re someone who has conquered a Level 12 Hell Dive, what point is there in going back to a Level Four mission, other than to unlock a new piece of equipment.

Helldivers‘ progression and global campaign features are acceptable at best and questionable at worst. These features both feel tacked on to increase replay value, which is certainly curious considering the core gameplay itself is the true star of the show. A slow, level-based progression bar increases at the end of each mission based on objectives completed, players evacuated at conclusion of a mission, and whether or not the team was able to avoid a high death count. The funny thing is, this progression bar never seemed to dig its hooks in too deeply, likely because the true joy of Helldivers comes from those intense moments when dozens of seemingly unbeatable enemies are suddenly thwarted. There’s never a sense that players absolutely have to reach that next level after the first ten or so, and going back to get certain planet-specific items is largely avoidable once an optimal loadout is discovered. Combine this with the fact that the socially-connected global campaign, which takes into account every player’s success to eliminate each race, can render an entire race unplayable until the other two are thwarted by the community (an especially frustrating element in a game that thrives on variance), and it’s clear to see where Helldivers falls short. Imagine a world in which the entire player-base never defeats the other two races; Arrowhead would essentially have to reset the campaign, thus inadvertently showcasing a major design flaw. 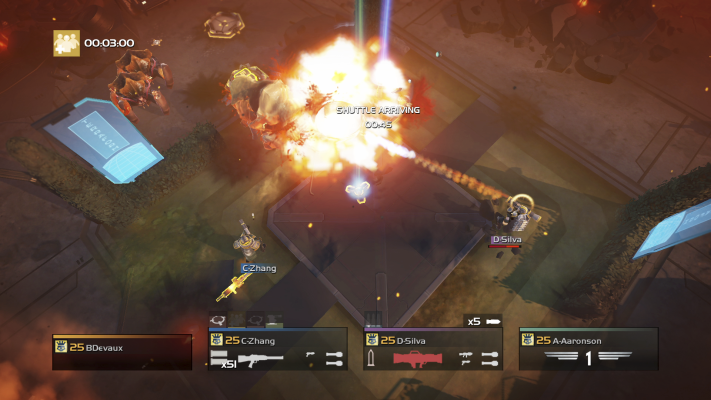 This last point is especially damning when one takes into account that Helldivers is an extremely repetitive game. Sure, there’s a certain level of joy that comes from attempting to best a seemingly unbeatable situation, but once that initial novelty wears off, it’s hard not to question whether or not any staying power exists. Every mission, while completely open-ended in terms of completion order, features the same selection of missions placed randomly around the map. Once you’ve activated a SAM turret twenty times, it’s pretty difficult to find joy in activating it the twenty-first. This brings up two very major concerns: the fact that Helldivers doesn’t feel procedurally-generated enough and the fact that its trademark difficulty wanes as players get more experienced. It’s simple to be sucked into the loop during those first few days in which everything feels new, but after learning every lesson and discovering every pattern, all joy is quickly sapped away. Yes, the stage layouts and mission placements are randomly generated, but how different is escorting survivors across a square forest from escorting survivors across a circular desert?

While Arrowhead Game Studios deserves a firm pat on the back for making Helldivers Cross-Buy, Cross-Play, Cross-Chat, and technically Cross-Save enabled, enough network issues have arisen to call its network stability into question. When the Rogue Legacy-style background Cross-Saving functionality works, it’s a wonderful addition to any title, as being able to continue one’s PS4 progress on the Vita feels futuristic. Sadly, this feature seems to be completely broken in Helldivers, being that Vita progress readily transfers to PlayStation 4, but struggles in the other direction. Entire days have passed where the Vita version seems to exist on an entirely different plane than its console counterpart, which is a true bummer once higher-level perks are unlocked. Cross-Play between the PlayStation 4, PlayStation 3, and Vita versions works as advertised, an exciting proposition for handheld players seeking a true console experience on the go. Unfortunately, this step forward is met with a major step back in the way of host migrations frequently failing, games dropping in progress, hosts stalling entire lobbies by putting down their controllers in-game, and the number of available multiplayer matches declining. It’s not completely uncommon to have to take upwards of five or six attempts to get into a multiplayer game, an unforgivable sin in this era of connectivity. Combine this with the fact that the player base, at least from a lobby perspective, seems to be decreasing and the insane notion that a lobby of three active players can’t kick a single inactive host, and it’s easy to see Helldivers falling off a cliff in the future. 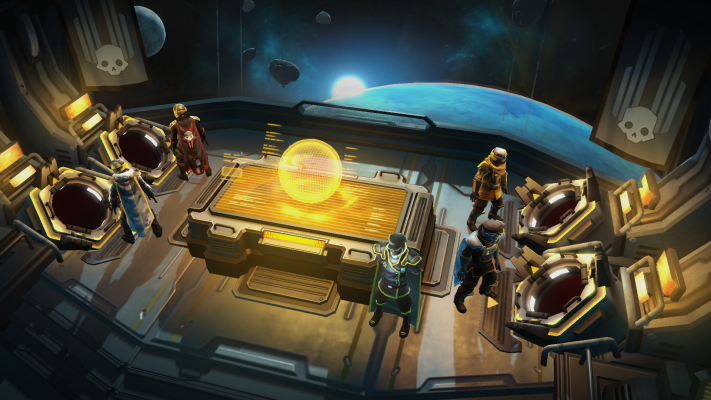 Helldivers is at first a fresh, rewarding, challenging experience that stands up to any other game in terms of quality. The tangible skill increase that comes from consistent practice is as gratifying as it gets in modern gaming, but sadly that novelty wears off once other flaws start to emerge. There are far too many network issues for this multiplayer title to hold its own for long, and while these issues can be resolved, it’s hard not to wonder whether or not players will still be around to see the fixed product. Add all of this to a genuine lack of replay value once everything is figured out and you have all the makings of a quality title that’s weighed down by a fair share of problems. It’s truly a shame, as Helldivers‘ core gameplay is among the best the industry has seen in the last six months or so. Here’s to hoping Arrowhead develops a sequel whose periphery is as good as the moment-to-moment gameplay itself.