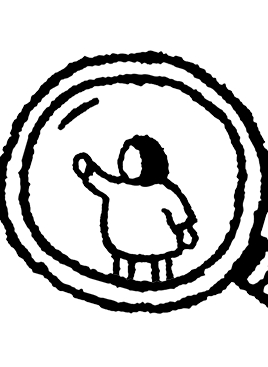 It’s a bit of irony in the gaming world that for as acclaimed as Bethesda are today, during their early era they had to get by with developing such games as Where’s Waldo? for the NES, an adaptation of the popular series of books that today has wound up as one of the worst-reviewed NES games of all time. Naturally, with a bar set that low, virtually any hidden object game could claim that they were able to do better than Bethesda, yet despite a vast amount of them released over the past decade, few of them have ever come off as being particularly notable. So can Hidden Folks succeed where others have…well, they didn’t fail, I suppose, but can it at least head in the opposite direction from Bethesda’s NES work and end up as an enjoyable hidden object game overall?

So the setup of Hidden Folks is that there are folks who are hidden, and you must find them. Deep stuff, really. Actually, you have more than a few various objects and trinkets to find alongside actual people as well, and in contrast to just panning around each area looking for your targets, you’re given a specific clue for each one concerning where to look in each level. You’ll find yourself journeying through jungles, farms, deserts, towns, and laboratories, each crammed with several little people going about their business, making their way around various shenanigans.

And with that, I would like to explain why Bethesda’s Where’s Waldo? game failed, and why Hidden Folks succeeds: Because it’s not just about finding Waldo, or whatever person you’re looking for. Finding Waldo is the main goal, sure, but the real fun is in combing over each crowded landscape full of fun worlds, colorful characters, and humorous scenes playing out (along with the occasional topless woman), and enjoying all the sights. And indeed, Hidden Folks delivers in that area, filling each level with tons of its titular townspeople engaging in various scenarios, be it dancing along with music festivals, tailgating, even just getting stuck in traffic. 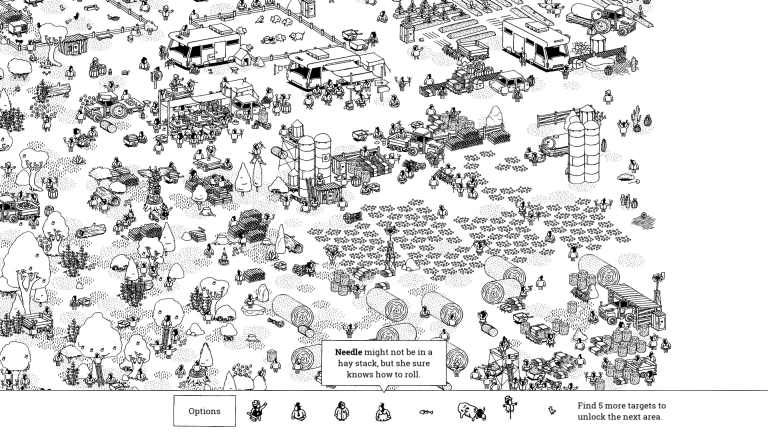 Of course, the game’s minimalist style helps in this area as well. Every square inch of Hidden Folks is hand-drawn, leading to a particularly unique black-and-white style that makes each area feel like a particularly elaborate page full of doodles, contradictory as that may sound. And despite the population lacking distinctive facial features, they show a lot of personality even in the simplest of movements that they perform, going about their daily routines and making cute little noises as you poke each one, constantly making sure the entire game is full of life. In fact, with no background music, the only sounds at all come from interacting with each object and person, with every effect done via a variety of mouth sounds, as if to feature an entire soundtrack by Michael Winslow. And as it turns out, a cacophony of such noises actually becomes quite adorable quickly, nicely setting a carefree tone.

In case you couldn’t tell, the basic gameplay is pretty simple. You have a list of people, animals, and objects with pictures for each one, you search for them, click on them when found, and then advance to the next stage when you’ve found enough. But a huge difference here is that a lot of what you’re searching for is indeed truly hidden, and so you have to interact with the surroundings in various ways when needed to uncover what you need, be it chopping down some weeds or sliding open a garage door. Simple yet fun indeed, but the real joy is in deciphering the various clues leading to each new goal, and coming across that “Eureka!” moment, like noticing the stones connecting to an SOS signal that point to a cave, or the ivy stretching down from a satellite dish that leads to the plant you want. All of the little riddles are well-written, put up a nice challenge, and are just plain fun to solve. 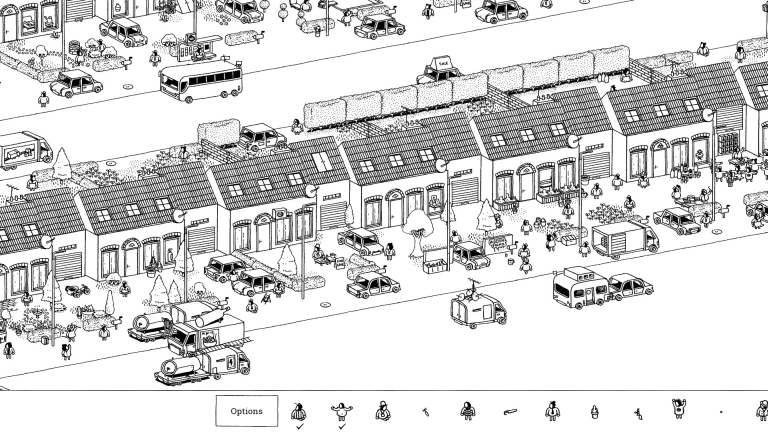 Mind you, you will end up coming across at least a couple of annoying puzzles as well, though. The entire desert area may be quite vast, but actually having to navigate around an area with so much empty space can be a bit of a chore. Said level also contains an example where you’re looking for an object that actually doesn’t have a unique sprite (in this case, a vulture), but is instead differentiated from the others solely by the clues given. Why the time wasn’t given to even add a couple of minor details in cases like these is a bit of a mystery. Ironically, the more crowded levels can be tricky to maneuver in as well, since clicking and dragging anywhere to move the screen around in an area like a huge city leads to several incidents where you accidentally open a window instead of immediately moving around, in a minor annoyance.

Finally, one other thing holding back Hidden Folks is that it definitely feels a bit short. Given the large amount of unique sights and objects in each level, you wonder at times why there isn’t an element of randomization with things, giving you a different checklist each time you play. Instead, you get the same lineups each time, and it only takes about two and a half hours to achieve one hundred percent completion. There is a promise at the end that additional content will arrive in the future (complete with an option to sign up for e-mail alerts when ready), but whether or not that can extend the game’s lifespan will have to wait for now. 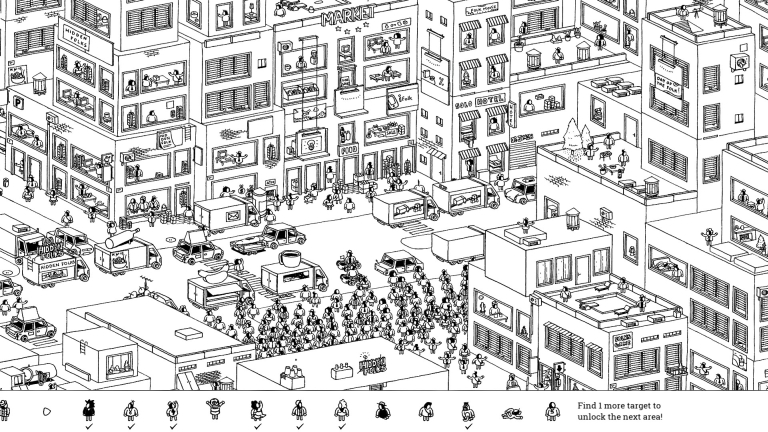 Hidden Folks may be on the short side, and has its occasional hair-pulling moment, but the hefty amount of charm it has in even the smallest individual, combined with some particularly clever puzzle design, make it worth taking at least one quick spin with. Hopefully we will indeed see a surge of more content to up the replay value in the future, but for now the end result is a solid and cute puzzle game that would do Martin Handford proud. If you can’t afford a classic piece of Waldo literature at the moment, maybe consider hunting down a few cute folks.