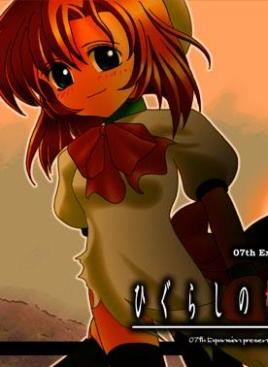 It is incredible to see how much Steam has expanded over the years. This digital distributor now carries a whole host of modern and classic games, with more surprise releases each month. Higurashi When They Cry Hou – Ch.1 Onikakushi is one of those. Originally, the first chapter of Higurashi When They Cry launched in Japan way back in 2002. It was only when MangaGamer picked up and translated the release in 2009 that Western gamers got their first legitimate shot at the murder mystery visual novel. MangaGamer were a fresher company at the time, however, and the release came with its fair share of translation and typographical issues. The publisher decided to revisit this well-known series and give it an overhaul prior to release on Steam.

Now, everyone accessing Higurashi When They Cry on Steam gets the best experience possible yet. The game has a redone script and also implemented the redrawn sprites. Although that latter point might not seem like a big deal, it is when you look at the original artwork. Characters were obviously drawn by a more amatuer hand, so much so that characters’ hands are circles with thumbs! But, if you truly want that more authentic experience than the original sprites are included and can be toggled on at any point. For most though, the new art is definitely preferable as it makes it easier to focus in on the mystery, not the laughable artwork. The new release also includes both English and Japanese language versions, although the original English translation is not also available.

But enough of all that, as most people playing Higurashi When They Cry today will have never experienced it before. As such, it’s time to discuss the storyline which has kept this as a very notable visual novel release over the years. It all starts out when a young man named Keiichi moves with his family to a small, rural Japanese town named Hinamizawa. It’s a beautiful location where everyone knows their neighbor – and the rest of the townsfolk, too! Luckily, Keiichi doesn’t have to spend long feeling like an outsider at all. Almost immediately he is befriended by a group of girls in the single school which serves all grades. 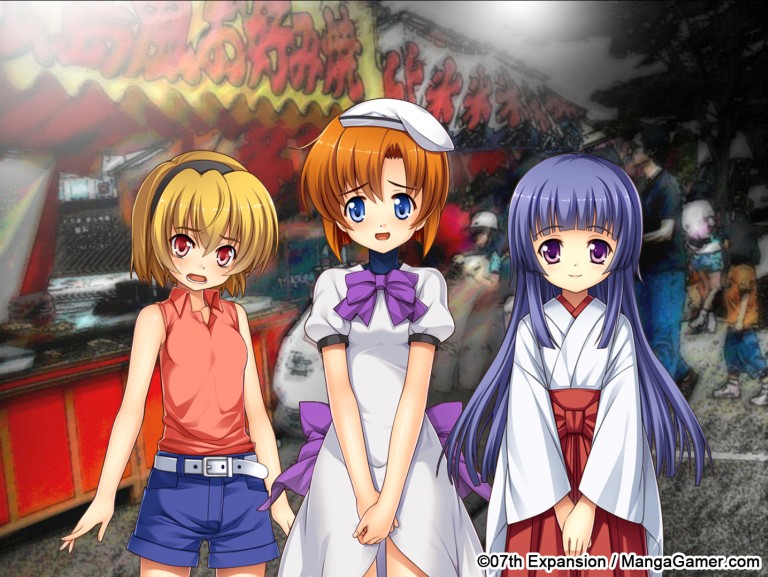 Each is a completely different sort of character. First, there’s Mion, the ringleader of the bunch who often acts far older than her age. Then there’s Rena – a character with an obsession for all things cute. Satoko is diminutive, but incredibly mischievous and always pulling pranks. Finally, Rika balances out this little terror with a very kindhearted nature. In all, it seems like a perfect group for Keiichi to enjoy hanging around with. Unfortunately, it appears not everything in Hinamizawa is so perfect. He slowly hears whispers from the group and others about strange disappearances and murder which happen once a year. Because no one wants to explain it to him, Keiichi digs deeper to discover the truth for himself.

Of course, as per horror and thriller conventions, learning more about a small town’s big secret is a recipe for disaster. Without spoiling anything, things shift very slowly. Higurashi When They Cry begins as a very meandering, cute slice of life game that amps itself up ever so gently. Once something finally goes awry it hits a huge, disturbing shock. Even by the end of Ch.1 Onikakushi, it’s very unlikely that the player will have become accustomed to the tremendous tonal shift. 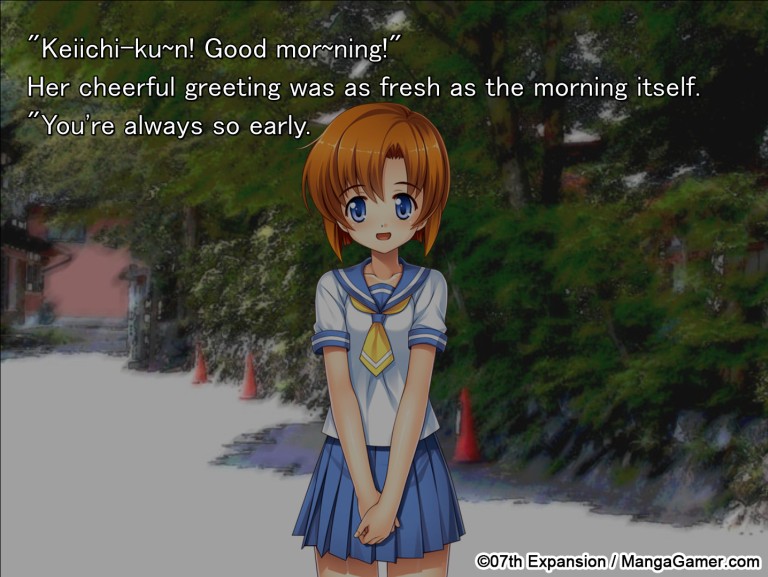 The writing is incredibly eerie, and amazingly effective. A small amount of typos still appear, but it looks that MangaGamer is quickly patching out errors whenever possible so this won’t likely remain a complaint for long. There’s a few other glitches, such as character sprites flashing on screen before appearing for real. Again, these aren’t killer points, and are probably being fixed already.

Nearly everything about this game’s story just works. It leans from the most asinine, youthful banter possible to truly twisted mental states by the end. Players will end up second guessing themselves just as much as the protagonist does, which is a huge compliment to the skill of storytelling on display. The visuals and soundtrack also back up the impressive tale. Although the anime sprites may seem pretty average, there are occasions in the story when they become imperative. You’ll know what I mean when you get to those points. Most of the soundtrack works, but the best aspect is the atmospheric moments when there’s no music at all. In those instances all you hear are the chirping cicadas (the “higurashi” of the title) and it really cements how rural and empty the town is. 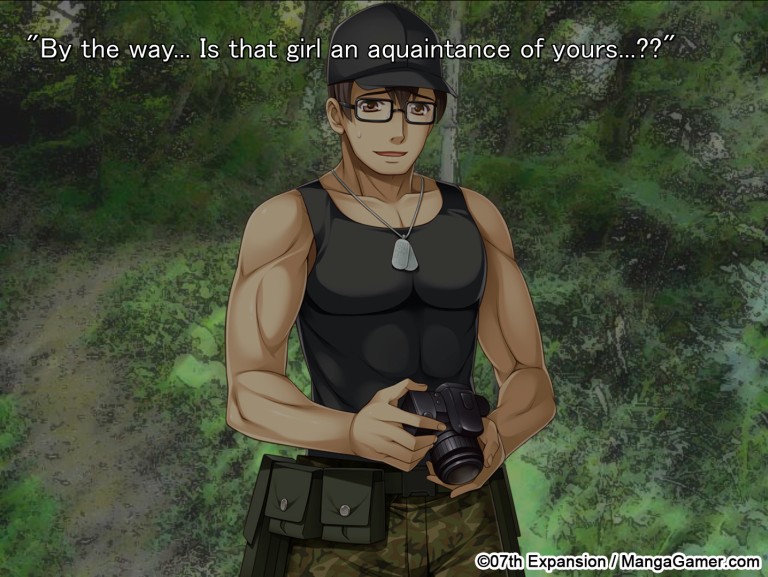 The best part about Higurashi When They Cry’s mystery is that it isn’t resolved by the end of Ch.1. In fact, even with all the evidence gathered thus far, it’s impossible to know for sure. Instead, players feel the need to continue onward. The only issue with this burning need to continue reading is that there are eight chapters in total, so we’ve got seven more to wait on. These aren’t Telltale Games-length titles either as Ch.1 – Onikakushi alone should last most players 6-10 hours. It’s worth noting that this is another one of those kinetic novels, meaning you don’t actually interact with anything in the game. You simply sit back, relax (or, more likely, become increasingly tense) and read. As long as you’re cool with the kinetic nature of Higurashi When They Cry then this is a must-own title for visual novel and horror fans.