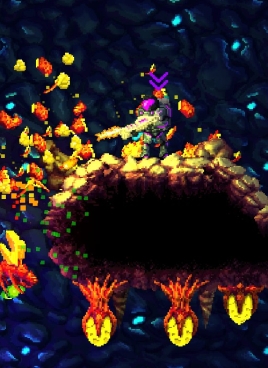 Hive Jump came to life thanks to Kickstarter, and like many projects on that platform, tried to find a way to merge the old with the new. Graphite Lab’s first game as a team is something that manages to feel both familiar and different. Its pixel art and visual design take a few cues from Metroid, while the twin-stick shooting evokes ARES with a touch of Turrican thrown in for good measure. Fans of that legendary European action-platformer will feel right at home with Hive Jump’s hazards and loadouts, too. Hive Jump aims to provide solid action and a good challenge — but one that is fair as well.

In execution, what you wind up with is a different-feeling game that is still somewhat familiar, but stands out in huge ways as well. The biggest single standout feature here is multiplayer, which changes the complexion of things with either local or online options. Your goal no matter what is to keep your backpack safe from enemies while making progress through the stage – a simple endeavor on a surface level, but one that requires great skill and patience to see to completion. Once its health is depleted, your run is over — adding a bit of permadeath to things.

The procedurally-generated levels ensure that no two play session is exactly the same, while exploration is rewarded with new items and weaponry. Death is handled in a unique way with you losing no lives — but devolving into just a jetpack-using backpack until your respawn timer refills. You’ll gain a new playable character, but they’re essentially just expendable because they never run out. It’s a system that punishes you for death — but not to an extreme degree. It finds a happy medium between forcing you to get better to make any real progress since you can’t do any damage as the backpack — but can at least move around slowly. 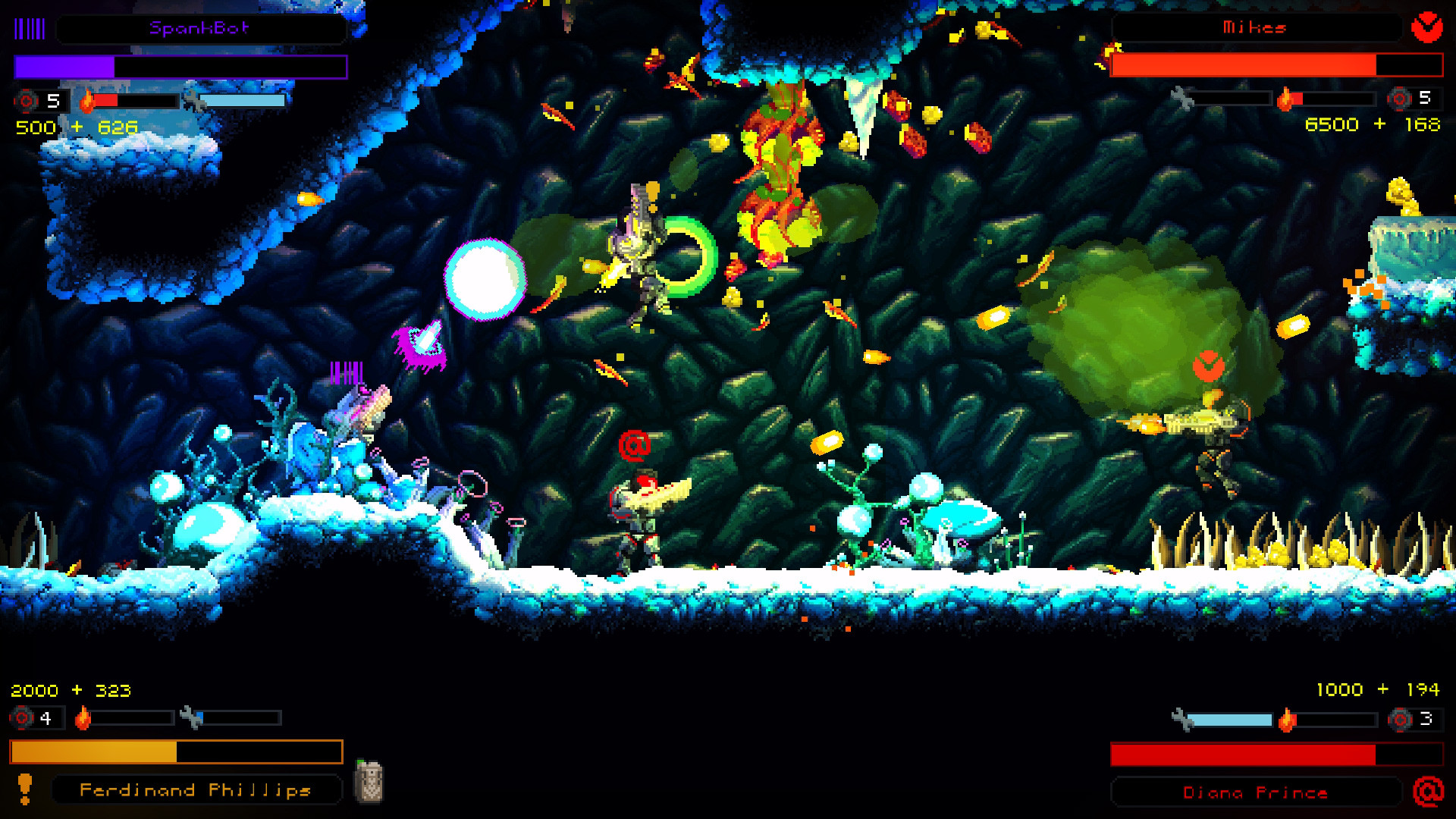 Getting from point A to B with your backpack intact allows you to not only exit a single stage, but later battle massive bosses. Going through levels either solo or with a team offers up a fun challenge, as you’ll each have to make sure that you don’t let your backpack get too damaged or else you’ll lose your allies. This means that expecting them to be bullet sponges is a surefire way to die because you will eventually wind up in a tougher situation without having anyone to rely on.

Enemies can take you out — but so can the environment. Acid is a sure-fire way to drain your health in a hurry just like it was in Metroid, while enemies themselves can leave behind acid blobs that can slowly kill you as well. In that sense, the environments evoke a bit of Turrican and other European-developed platformers as well. The ever-present sense of the environment itself being out to get you means you can’t just go into a stage with your guns set to “shoot everything!” — you have to think. Going in trigger-happy will result in your gun overheating quickly — leaving you exposed to enemy fire for an extended period of time. Your best bet is to kill the enemies closest to you and then slowly take out enemies that are further away. This allows you to stay safe while also ensuring that you have firepower available to take out enemies.

Different loadouts are a key to success. If you’re playing by your lonesome, you’ll need to use trial and error to see which ones you like best. Playing online or with friends lets you see other weapons before you can either access them or have had a chance to use them — and can give you an advantage in that regard. Long-range fans will like the default gun, while those who seek pure power will want to grind a bit and unlock things like the flamethrower that can deal out a lot of damage quickly — but only from a short range. 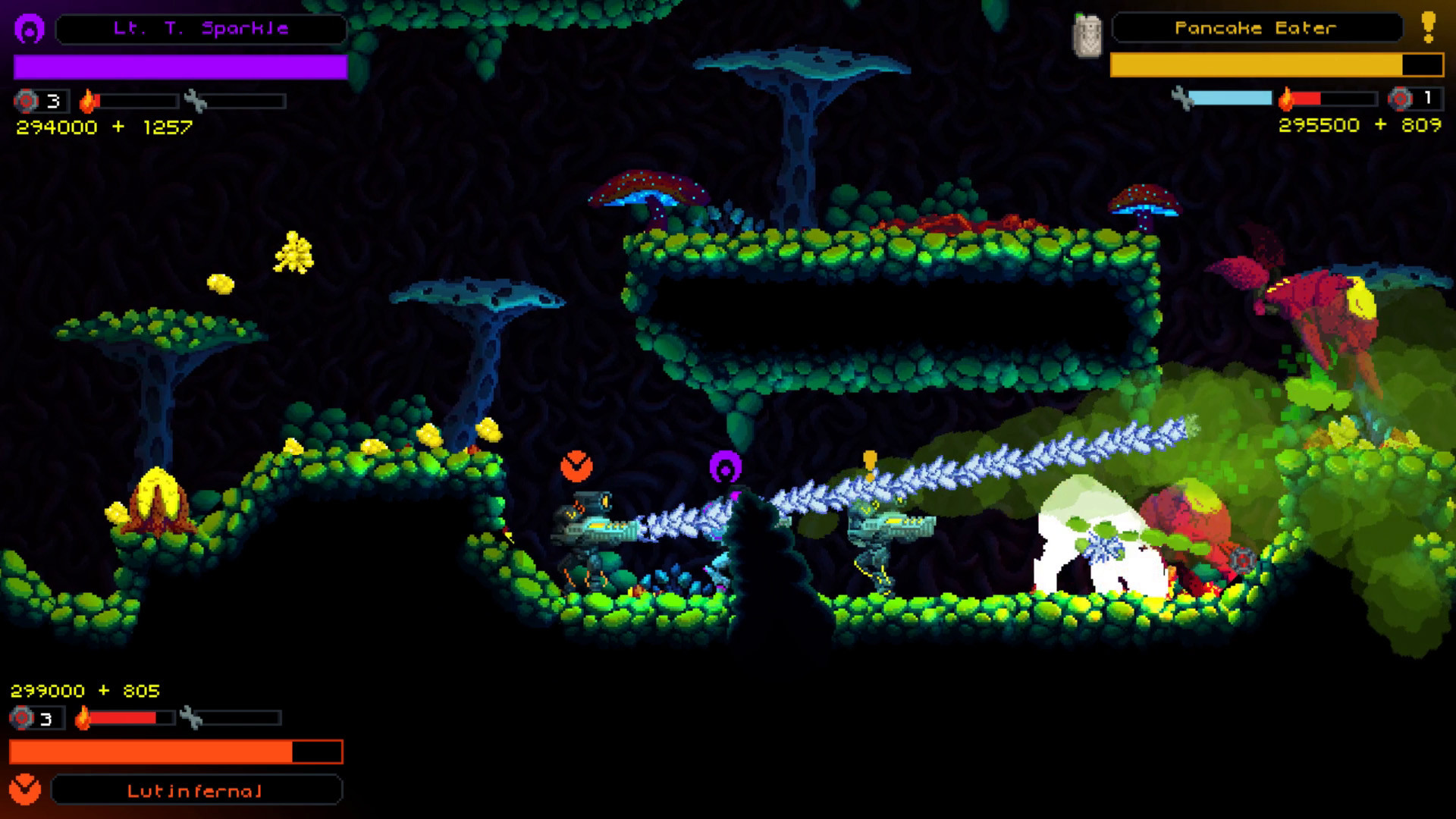 Controlling with either a keyboard or controller is possible, but a controller is the best way to play this by far. Using the keyboard is cumbersome and isn’t quite as user-friendly — but it is functional. The controller-based control setup is somewhat awkward, but largely works well. LT jumps and lets you ascend with your jetpack, while RT shoots and the right stick aims. Despite this being a 2D game, you can’t use the d-pad — and instead use the left stick to move while grenade-tossing is done with RB. Grenades can clear paths for you and your allies — but you need to be careful with your aim or else you’ll damage either yourself or an ally. The controls are incredibly responsive, while the gameplay itself has a nice flow to it.

Multiplayer is a seamless blast locally — but games can be hard to find online. Fortunately, when you can find a game, it’s a lag-free experience and the game’s design works shockingly well for online play. Normally, having players off-screen is tough but it works out reasonably well in Hive Jump. Large icons show you where your allies are located, so you never lose track of them and everyone can see their own screen and be safe — so running into environmental hazards because you can’t see them isn’t an issue. 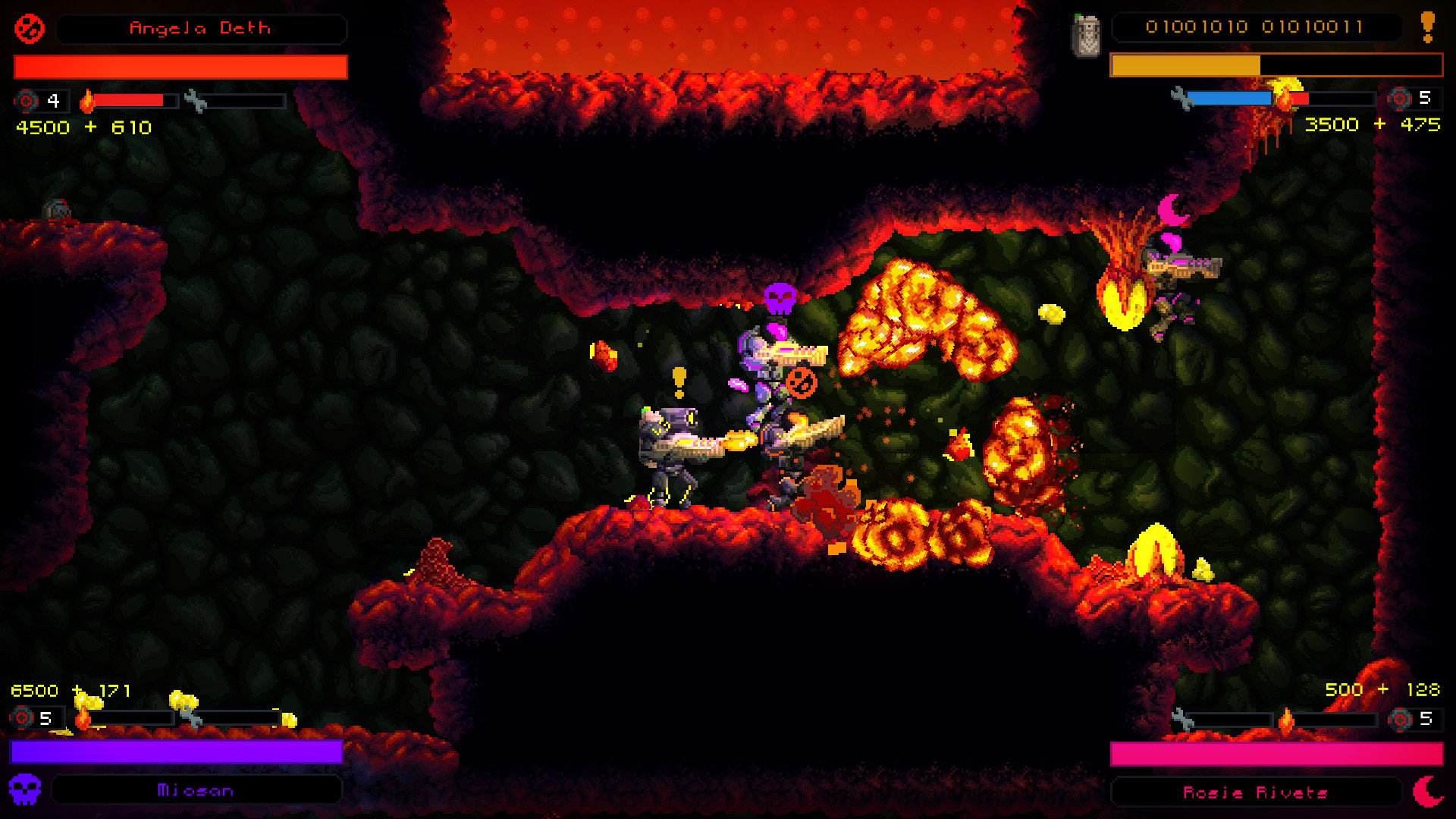 Beyond online and the campaign, you also have the faster-paced arcade mode that gives you smaller levels to explore. This allows you to enjoy the game without having to spend a lot of time with it if you don’t have time to do so. You can also compete in challenge missions to focus in on certain tasks, or train to get better in certain parts of the game. You’ll want to make use of as many offline modes as possible before heading online, so you can be as good as possible and not get swamped and overwhelmed.

From the moment it hit Kickstarter, the game’s lighting has been something the developers have been quite proud of — and with good reason. The game’s fire effects are stunning and explosions lead to different lighting hitting the environment and looking impressive. Weapon fire has a satisfying size to it and the game’s pixel art style fits the 16-bit era, but with flourishes that could have only been done in the 32-bit era and beyond — offering up fans who have wanted to see that kind of graphical fidelity showcased something to enjoy. Hive Jump‘s sound design works as a throwback with chiptunes, but doesn’t stand out. Its sound effects do though, with impressive work being done to make every blast feel visceral and fairly violent — which is backed up by having enemies explode in front of you. 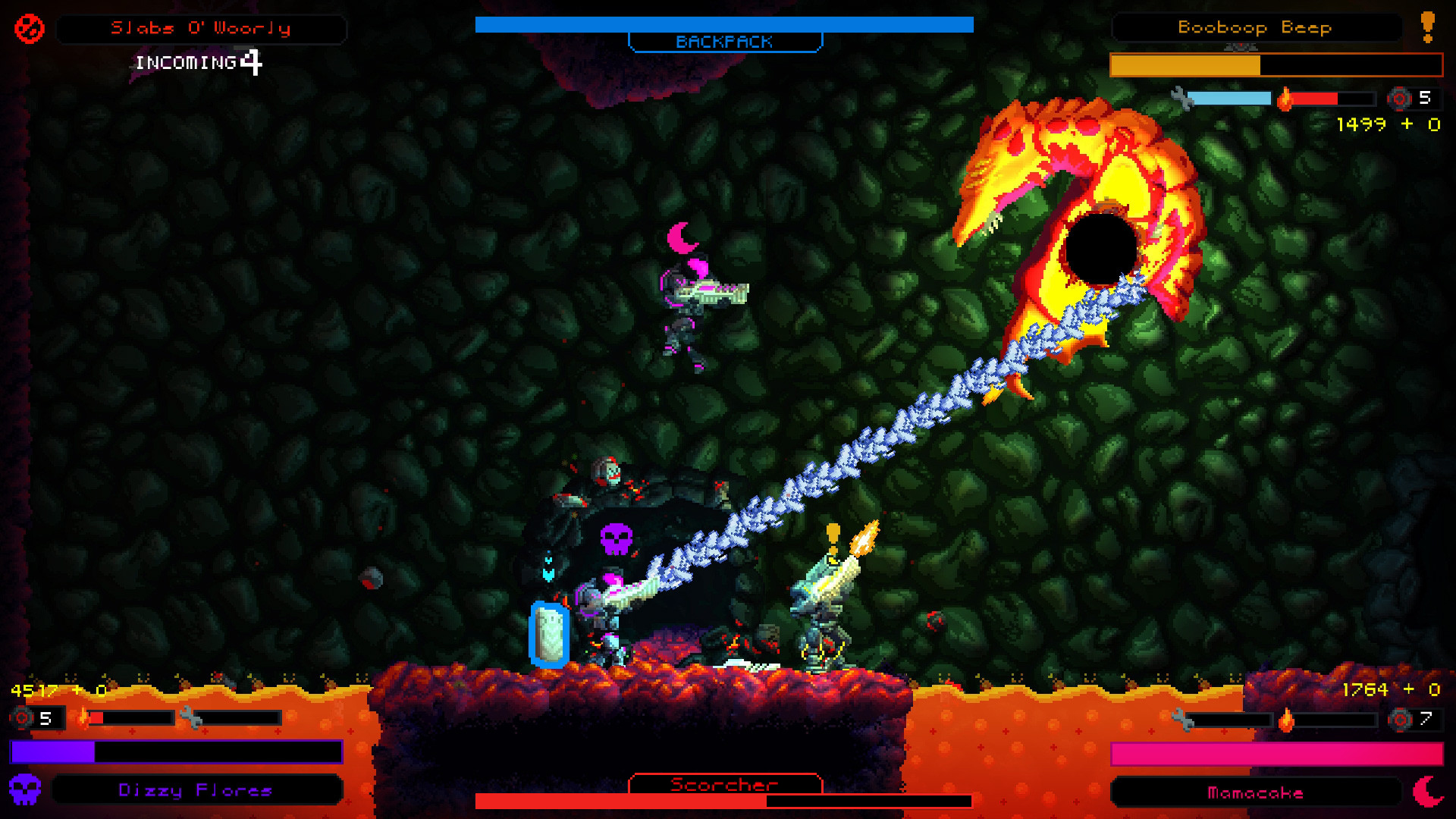 Hive Jump combines many sub-genres of action-platformers into one game, and does them all fairly well. Its shooting is fantastic, with strong sound design making each kill feel rewarding. Putting in a touch of permadeath works surprisingly well for an action-platformer, making you play more carefully than a game like Contra or Metal Slug. Its graphical prowess shows off visuals that would be at home on 32-bit hardware, with a lot of impressive lighting and explosion effects. The only real downfall is the soundtrack — while it isn’t bad, it doesn’t stick with you during or after a play session. Fortunately, everything else gels together well enough to make up for that lone shortcoming.