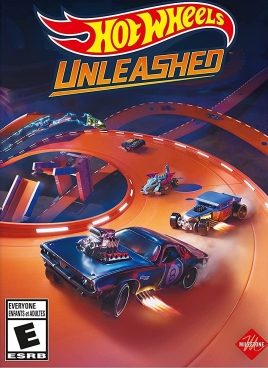 The Hot Wheels license has had its ups and downs over the past thirty years, but Hot Wheels Unleashed is the first time it’s been given its own game and does justice to the long-running die-cast car line in ways that couldn’t have been imagined. Milestone’s own racing games have been a mixed bag, but when it comes to pure racing enjoyment, Hot Wheels Unleashed hits the ground running. As we noted in our preview a few months back, it’s a well-crafted game, and the full game offers up even more content and polish. Arcade-style racers has grown in popularity and the Hot Wheels license is perfect for them — making Unleashed a promising prospect for those wanting something new from arcade racing games.

In an early form, the game was impressive thanks to its fast-paced action, setpieces with parts of the stage attacking the player and top-notch drifting. Those elements remain intact, but with more substance overall thanks to an increase in mode variety and more cars to choose from. In an early form, it was clear how much potential the full game had — and now Hot Wheels Unleashed finds itself in an odd spot of managing to both over and under-deliver in various ways. As an arcade racer, Hot Wheels Unleashed fits in nicely with games like Horizon Chase Turbo and even legit arcade ports like Cruis’n Blast. Where it falters is in some of the execution of the non-racing elements that tie into the whole concept.

The idea of having a well-made game with all the Hot Wheels one could dream of is a solid one and a key reason why the franchise has been so appealing for games like Forza Horizon 3 and Buggy Beach Racing 2. There’s a large group of racing game fans out there that became fans of cars thanks to Hot Wheels showcasing the beauty of licensed cars, but also the creativity of the folks behind original Hot Wheels designs that led to things like an animated series in the early ’90s. The Hot Wheels craze was a big deal and anyone who grew up in that era would be in awe at seeing a game like this that takes legendary Hot Wheels cars and puts them on orange track segments throughout real-world locations. 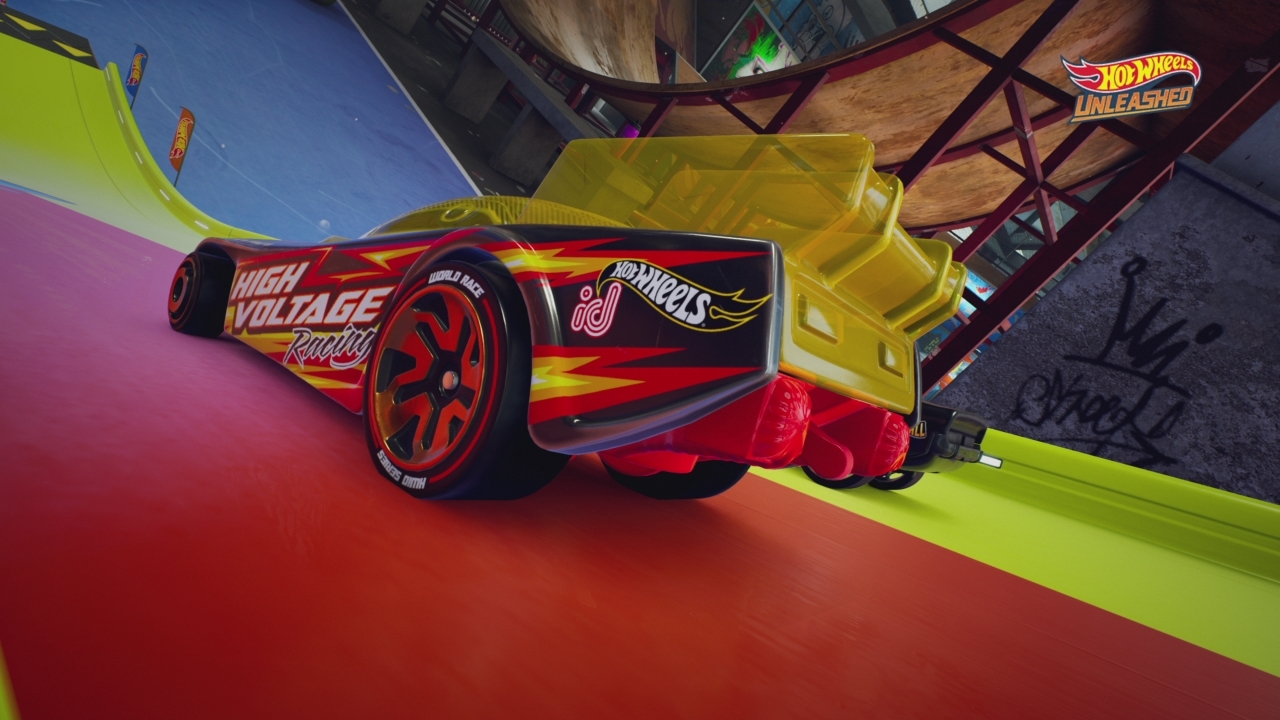 The concept is one that seemingly can’t fail and it doesn’t thanks to Milestone’s hard work, but there’s room for improvement to how everything comes together. There are two types of in-game currency to earn: coins and gears. Coins allow players to unlock new vehicles via either blind boxes or specific time-limited “deals” that rotate throughout the day. Gears enable the player to upgrade their vehicles and thus have an easier time getting top finishes and earn more money in the coin-based races. Each kind of currency feeds into the other and focusing on gear-based races may result in more powerful vehicles, but it can result in the player losing chances at getting cars they want. Going with coin-centric races is usually best as even early on, players can get a few vehicle types to use thanks to free unlockables and dabble in different styles.

Those wanting to bulldoze the competition should pick things like garbage trucks, while sportier cars are the best for evading on-track attacks from things like spiders and getting out of near-crashes quickly. The track design is outstanding and while the environments themselves are limited in theme, because the track piece color and hazards change often, things never get old visually. In-universe settings like basements and college dorms make for great-looking locales and players can even tinker with the appearance of the basement setting if they so desire with coins.

Having drifting as a core component to success alongside drafting makes faster-paced races a nice reward for players who don’t mind taking chances. Both techniques allow boost gauges to fill up faster and that can either enable more sure-fire wins or more out of nowhere wins for traditional races. When engaged in time attacks, drift mastery is key to not only maximize track position, but also earn more boost to shave seconds off your time and earn either the minimum time needed or the best possible Unleashed time. This aspect of the mode reminded me a lot of Project Gotham Racing enabling players to either just get a bronze to get by or make faster progress with more rewards with tougher challenges. 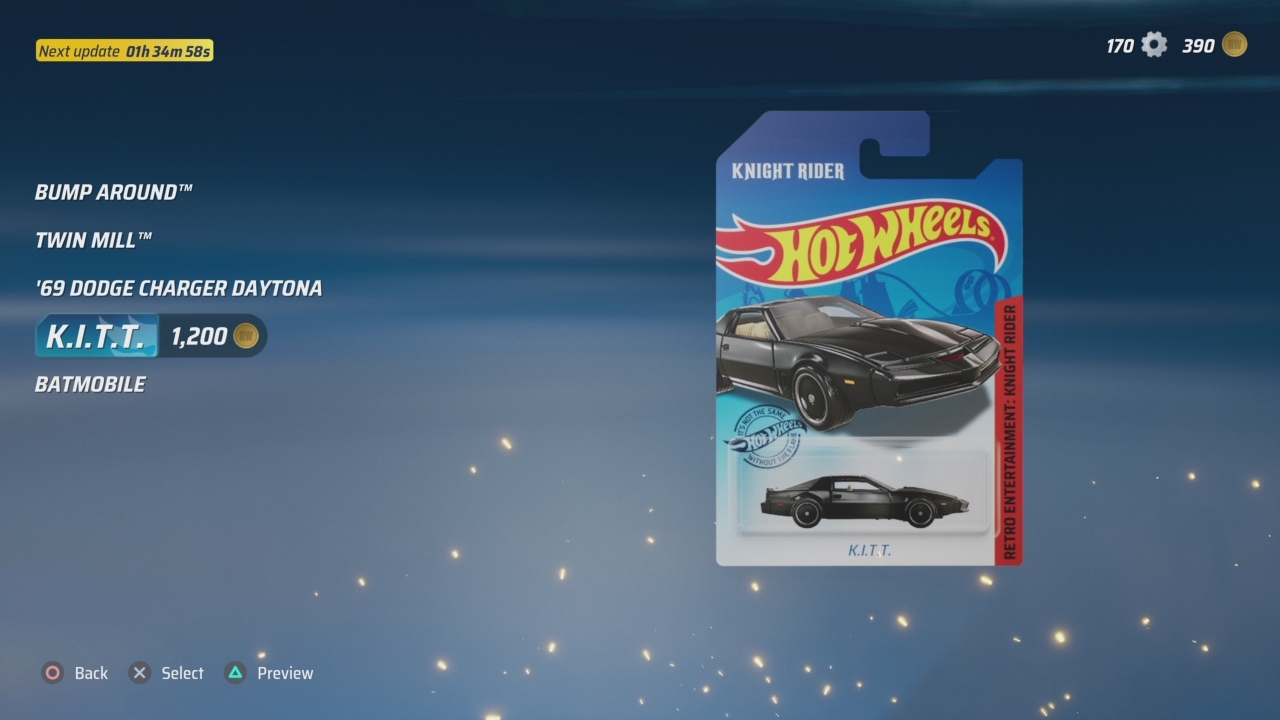 The on-track gameplay is outstanding, but the grinding required to win cars is something that will hopefully be toned down over time. First place race wins generally net 50 coins with blind boxes and original Hot Wheels costing 500 coins each and licensed cars costing 1,200. This means that if there’s a specific car you want with a time limit on it, you could easily grind for hours and just run out of time and lose the chance to get that specific car. While the gacha nature of blind boxes somewhat fits the collector mindset within Hot Wheels, having it in this game hurts the overall presentation. It would be nice to have the coin totals dropped to buy cars or have coin totals increase for race payouts. As it is, players could wind up getting burnt out just trying to unlock a single car.

Visually, the cars do look fantastic — with metallic flake paint in particular shining and showing off impressive texture work on PS5. Players can customize most vehicles with custom paint work or apply a downloaded livery offline to help mix things up visually. The tracks themselves look great too with a lot trackside detail in the environments and impressive lighting effects used on the track pieces and in the world itself. It’s a great-looking game overall and one that captures the thrill of racing with visual flourishes like smoke and sparks to showcase the level of speed and impact of crashes.

Other than the gacha mechanics for unlocking cars, the least-impressive part of the presentation is the soundtrack. The light rock soundtrack is fine, but unspectacular and doesn’t stick with the player after a session. The sound design as a whole, however, is good. An intense race feels much better when you can hear other cars around you clashing and then closing in on you. It creates a heightened sense of both panic and excitement — especially if you’re in first place and it’s the end of a lap or the race itself and you desperately want that first place finish. 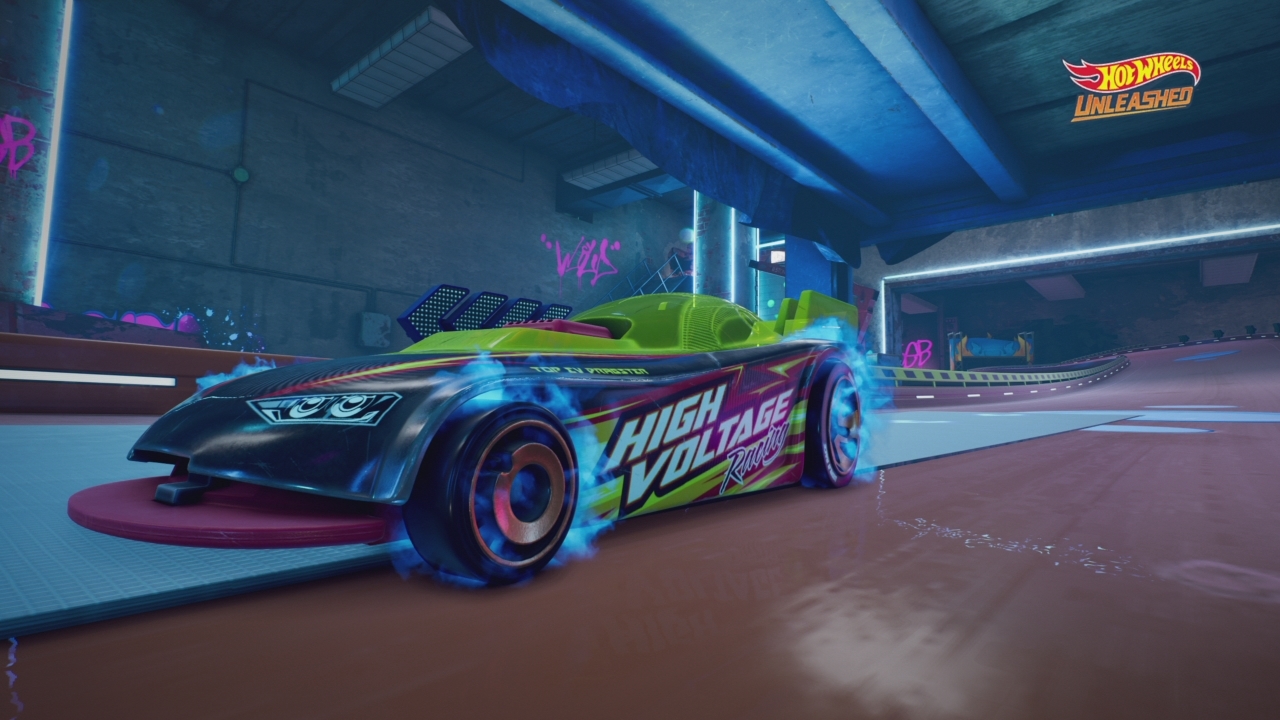 Hot Wheels Unleashed is a fantastic arcade racer at its core, but the overall product is hurt by the gacha mechanics. Thankfully, the quality of the core game is good enough to largely overcome that handicap, but it would be a far better experience with rebalancing in that regard down the line. The racing action is fast-paced and thrilling, with strong sound design that helps make up for a lackluster soundtrack. Hot Wheels Unleashed is a fantastic pickup for anyone who grew up wanting a fleet of Hot Wheels cars — and that aspect will get better as time goes on with content packs.