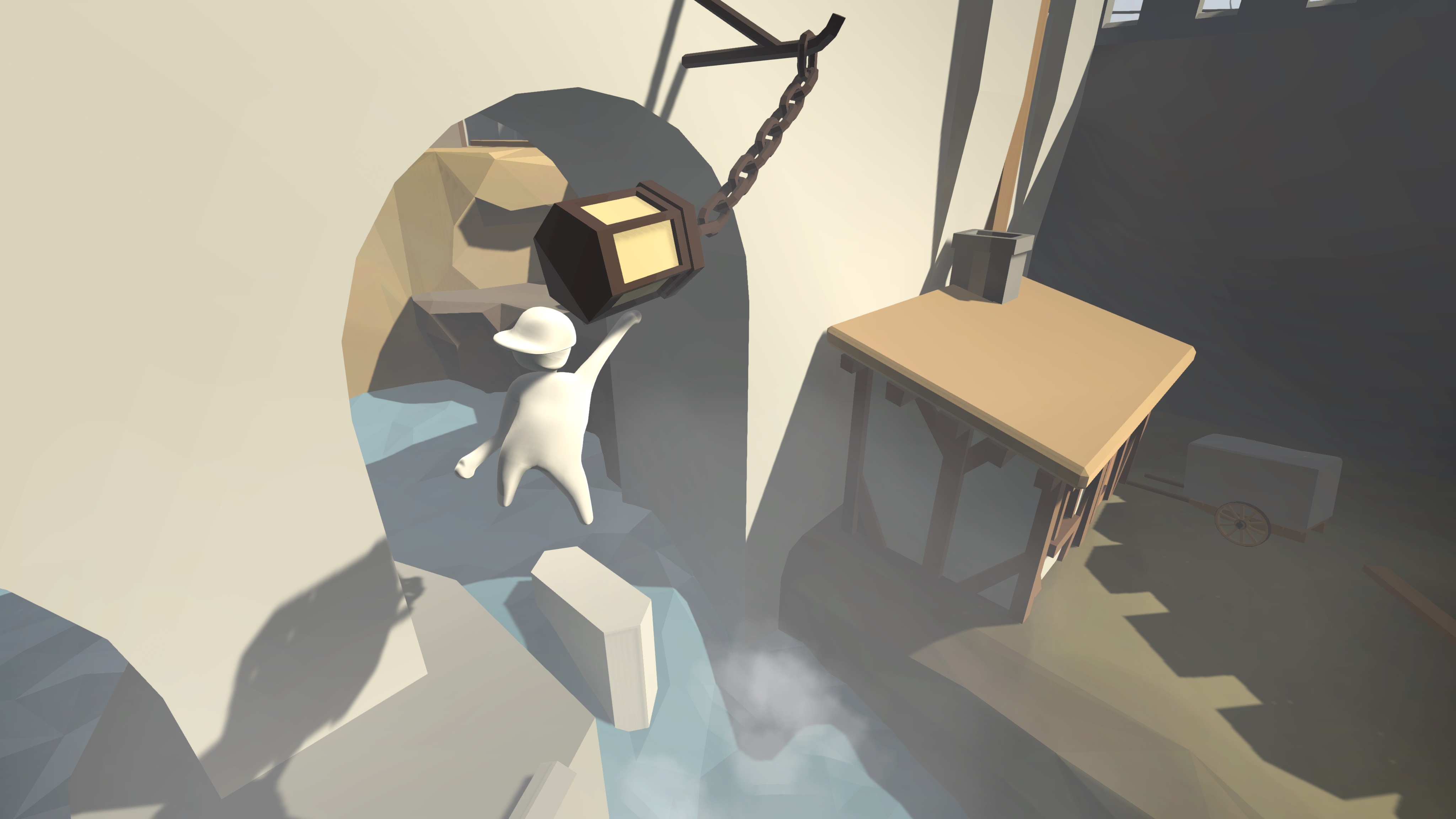 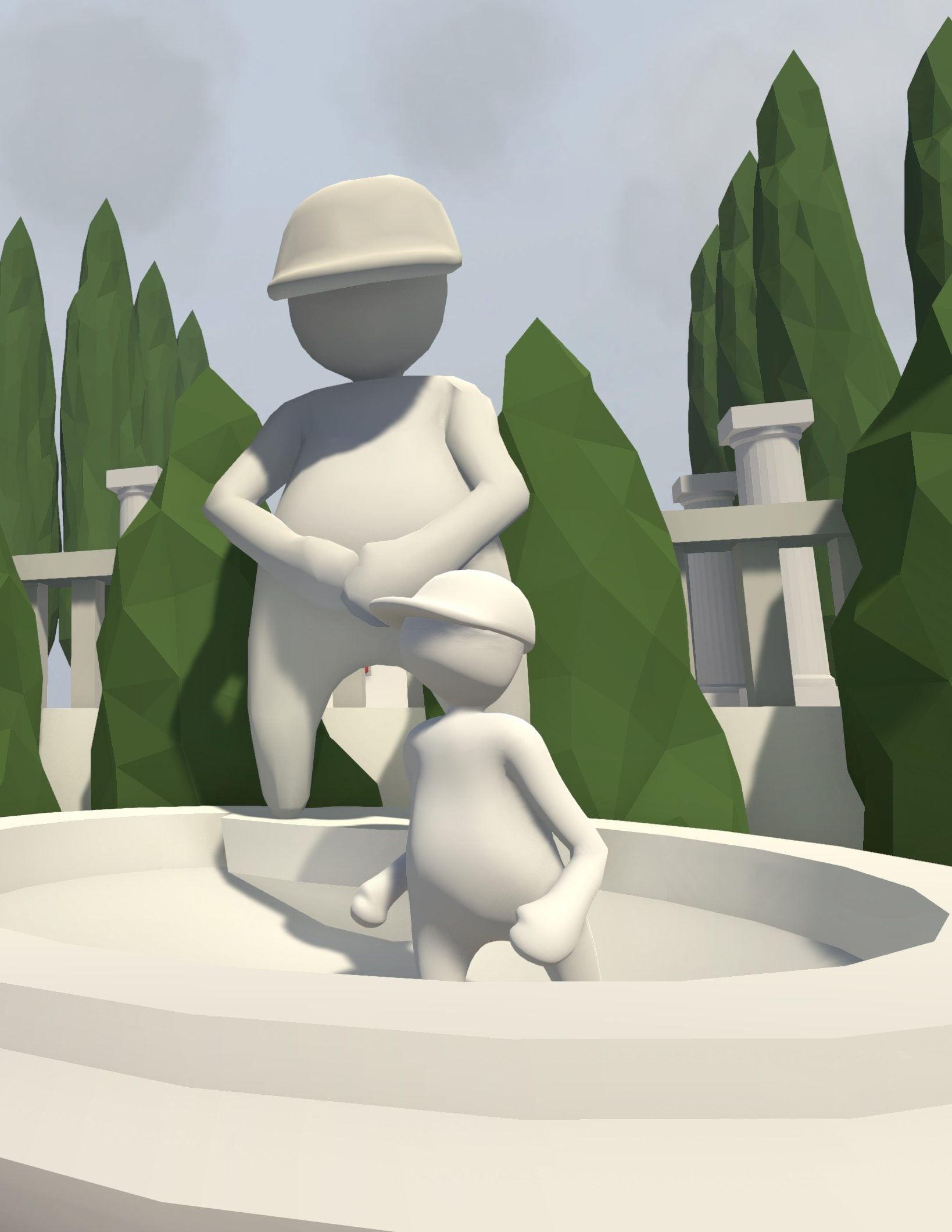 Human: Fall Flat lies at the intersection of a number of gaming subgroups, which actually works out in its favor. This quirky Gang Beasts-meets-a-puzzler title feels like a challenge for perfectionists, a goofy romp for kids home from school, a neat twist on the genre for puzzle game fans and a source of chuckles for stoners. Human: Fall Flat should be far more annoying than it actually is in practice, considering the combination of a wacky physics system and puzzles that you can conceivably get stuck on. Make no mistake, there are moments where Human: Fall Flat almost begs you to walk away from the controller out of frustration, but these feel neatly sprinkled on top of lighter fare and moments of improvised hilarity. No Brakes Games doesn’t have the next Inside or The Talos Principle on its hands, but there’s enough to love in Human: Fall Flat to make it worth the price of admission.

If you’ve spent any time with Boneloaf’s Gang Beasts, you’ll be familiar with the physics tomfoolery at the core of everything in Human: Fall Flat. For those of you who are completely uninitiated, the concept is simple on the surface but rather complex under the hood. Inverse kinematics power every player action, so every way in which you interact with the world around you affects how your character moves. In practice, this makes every action that your avatar makes feel deliberate and exaggerated. There’s obviously more science at play here than someone who lasted a mere year and a half as a chemistry major could explain, but what’s important is that your character in Human: Fall Flat basically moves around like a drunken baby. Picking up objects could be as simple as using the triggers to put each hand on the object and using the right stick to look to the sky and pick it up, or it could be a flailing two-minute struggle. It’s no secret that Human: Fall Flat is supposed to be goofy, and while this is definitely enough to power shorter play sessions, there’s enough clever puzzle design in here to prevent it from being a gag you request a Steam refund for after five minutes. 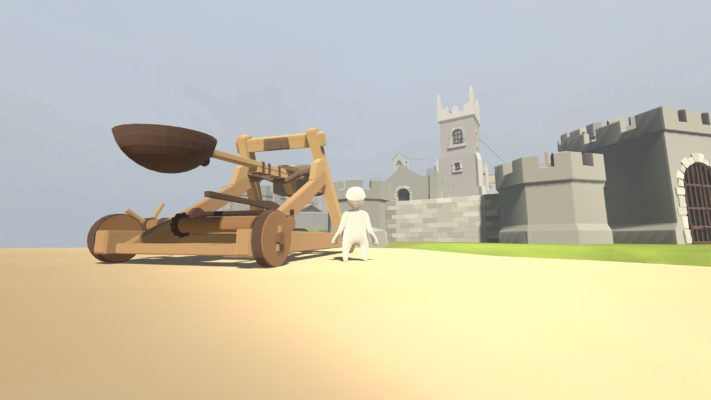 Of course, running around in a world built around zany physics would only be fun for so long. What gives Human: Fall Flat enough legs to power it through the length of its campaign are the nature of its puzzles. Taking place in a succession of bite-sized environments that make up larger levels, each stage involves a combination of environmental manipulation, platforming and climbing. At first, you might simply have to place a box on a pressure-switch or climb up a series of platforms, but this quickly evolves into the previously unthinkable. For one later stage involves driving a truck up a long hill, collecting coal and powering a series of large industrial furnaces. Being that every task requires you to fight against its wonky physics system, Human: Fall Flat definitely makes for decent cooperative fooder, which its drop-in-drop-out multiplayer allows for. Solving puzzles using these wacky mechanics inspires the same sort of joy as, say, Octodad: Dadliest Catch, but thankfully you feel far more in control here. Unfortunately, Human: Fall Flat definitely has a few notably flaws that prevent it from being the potential darling it had the chance to be. As creative and entertaining as the physics system is, there aren’t really have any mind-blowing brain-teasers, which eventually works against its quality ceiling.

Easily the biggest bummer in Human: Fall Flat is the barebones nature of its environments. It’s worth noting right off the bat that this complaint has nothing to do with its visuals, whose simplicity actually creates a pretty compelling aesthetic almost immediately. Rather, this issues boils down to one very simple concept: there simply isn’t enough to interact with in each of these stages. Sure, there are definitely some puzzles that can be solved in multiple ways (these sections stand out as the most rewarding portions of Human: Fall Flat), but there are far too many instances where a solution is immediately obvious, negating any thought or sense of improvisation. Easily my favorite part of Human: Fall Flat came from throwing couches and speakers off of a penthouse balcony, a moment that had literally no impact on my progression in any way. Often, the only items in a given stage are used to solve a given puzzle, essentially forcing players to never stray from the task at hand. With such an entertaining core hook, it’s a shame that you aren’t given that many opportunities to just fool around. Considering that you can use your webcam to make horrifying skins for your avatar, fall off of the stage without consequences and drown yourself, it’s troubling that No Brakes capped the level of hilarity in Human: Fall Flat through a lack of interactive objects. 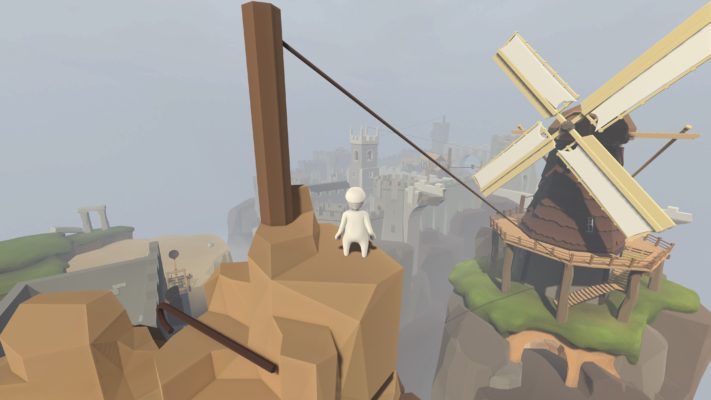 One thing that is critical to bring up is that I used my Xbox One Elite Controller to modify the standard control scheme, which made everything far less cumbersome. By using a single paddle on the right grip to jump, I never had to pull my hand off of the right stick, making it easier to climb and manipulate objects in the environment. Because the standard jump button is A, there’s literally no way to grab onto an object and jump in a different direction while shifting your view. Having a luxury controller definitely eliminated this clumsy input issue, but because the vast majority of gamers don’t have an Elite Controller, there will definitely be some growing pains in the first few levels. Add this to the fact that later puzzles can get downright maddening, especially those that require you to connect color-coded wires to the appropriate slots on outlets and batteries (physics really work against you here), and it’s nowhere near outrageous to say that Human: Fall Flat definitely stumbles in a few areas. Still, these noticable warts don’t detract from the total package, which is designed to bring a smile to your face almost immediately.

Picking a game like Human: Fall Flat apart in a review almost feels disingenuous. No Brakes Games set out to make a wacky physics puzzler that inspires a few laughs, and it’s hard to argue that hasn’t been accomplished here. Yes, Human: Fall Flat isn’t a perfect video game, and every review out there should make that known, but there’s an elegance to its one-two punch of simplicity and stupidity. So many puzzle games out there attempt to get overly serious and existential (one of the best games of 2016 is definitely guilty of this), making a game clearly shooting for dumb fun refreshing. Granted, Human: Fall Flat definitely has some moments that stretch its mechanics an inch or two farther than they should, with the most glaring example being one section where you to climb up a massive water turbine. Overall, though, this is a title that basically knows what it is and doesn’t try too hard to stray away from that. That isn’t the worst thing in the world. 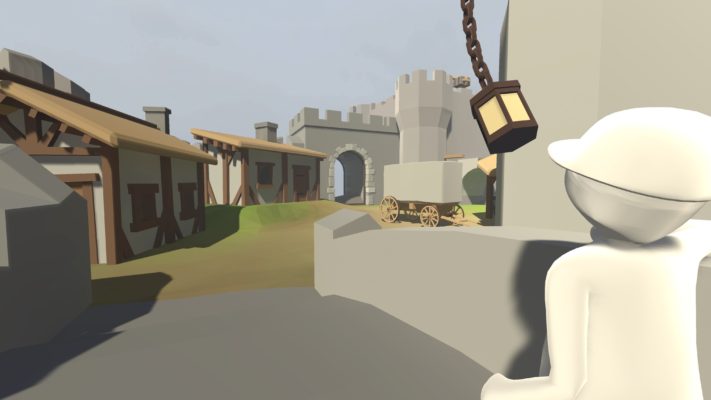 Human: Fall Flat is weird and it embraces its oddity enough to make it worth a full playthrough. Sure, its puzzles can become cumbersome to the point where they fight against its goofiness and it’s a really a bummer that there aren’t more dumb things to interact with in each stage, but if you’re looking for a novel distraction in the midst of a summer lull, you could do a lot worse than Human: Fall Flat. It’s not the type of title that will keep you glued to your seat for hours on end and it’s probably going to fall short of being the YouTube sensation it had the potential to be, but for a few brief pick-up-and-play sessions, it’s a winner. Most intriguingly, Human: Fall Flat proves that this style of wonky physics can be used for more than just hilarious local co-op brawls over a few drinks.