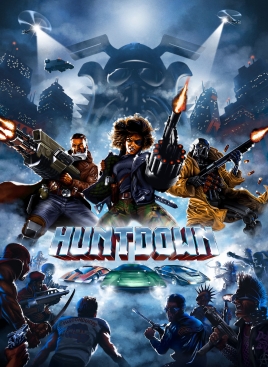 Whenever I think of the gold standard for retro-style indie games, my go-to title tends to be Shovel Knight. Not merely because it’s a good game, but rather because it wholly commits to providing a perfect retro experience. Every part of it is designed to make it feel like an NES game that came straight out of 1991. So when confronted with Huntdown, the new 2D action game from developers Easy Trigger Games, I had to see if it could pass a similar test. It does everything it can to emulate classic late ’80s arcade games (to the point of having actual arcade versions of the game planned), even if the over-the-top attitude and aesthetics feel a bit like modern design choices. But can it match the same level of enjoyment as its inspirations?

Set in the far future, Huntdown sees you playing as one of three bounty hunters, hired by “Wolfmother,” a mysterious key figure in the Shimamoto Corporation. They want you to take care of some of the street gangs that have popped up in this dystopian future, and so armed with a trusty gun, you head out to do just that. It’s a simple plot from the days of coin-op, and there’s not much more I can add to it. Our main trio are a colorful bunch of ex-commandos, cyborg cops and androids I could discuss, but I would be unable to set the stage as well as the game’s launch trailer (“He’s been a man ever since he was a boy!”).

Similarly, the gameplay in Huntdown doesn’t require much elaboration. Here’s you (or you and a friend if playing co-op), here’s a specific default gun for your character, here’s a ton of enemies in your way, here’s a bunch of weapons to pick up, now go nuts. It’s the type of tried-and-true gameplay that’s easy to get into and controls perfectly. There are a couple of notable additional elements, though. For one, there’s a cover system. By ducking behind an object like a crate or car or pressing up while in front of a dark opening, you can pop out simply by pressing fire, which leads to some fun firefights. There’s also an emphasis on destructible environments at times, including your own cover being damaged or being able to create your own cover in a wall with the right explosion. 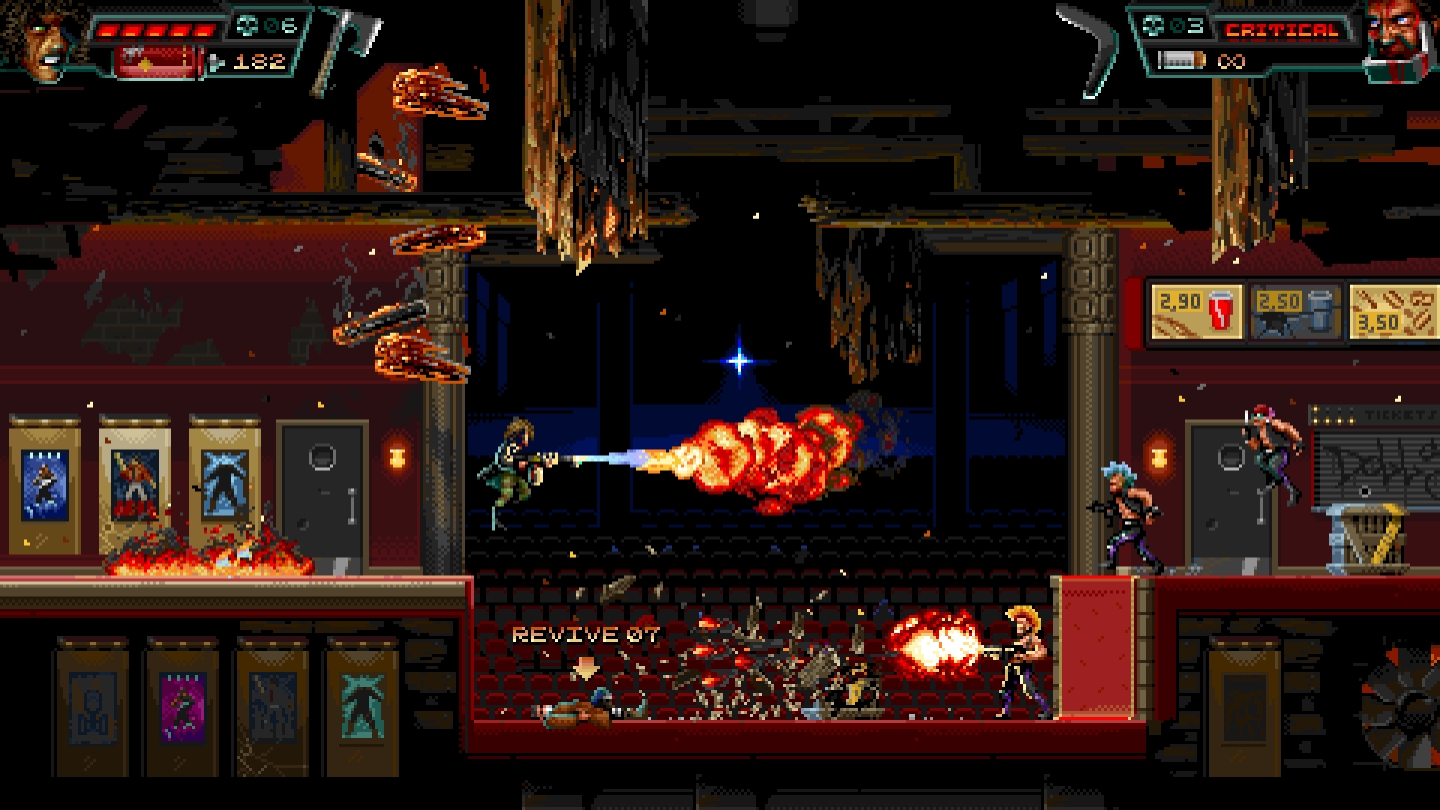 Also notable are the secondary objectives. See, you don’t have to actually kill enemies when necessary and can run past most of them if they’re giving you trouble, but killing a certain amount of enemies in each level is a goal the game gives you that you can shoot for (and let’s be honest, you will be killing tons of enemies anyway, if only for that old-school rush). There’s also the goal of obtaining three hidden briefcases in each level, which requires a nice amount of exploration and even requires you be fast in chasing down enemies that have them before they can get away, upping the ante. The final secondary goal is to complete a level without dying. Which will be extremely tough, given the type of game we have here and the era it pays homage to. All of this may not sound like much…and yet it adds up to so much more in execution.

A phrase that I tend to use often in my reviews, “genius in its simplicity,” easily applies to Huntdown. Sure, the gameplay is rock solid, utilizing familiar run-and-gun and action-platformer tropes and tools. But all of that is for nothing if you’re running around and shooting punks in just any old setup. What makes Huntdown work is something not necessarily visible to the naked eye at first. And that’s how immaculate every part beneath the surface is and how it clicks together. Easy Trigger Games have gone above and beyond here, crafting something that looks completely carefree yet obviously has a ton of work poured into every aspect of the world. 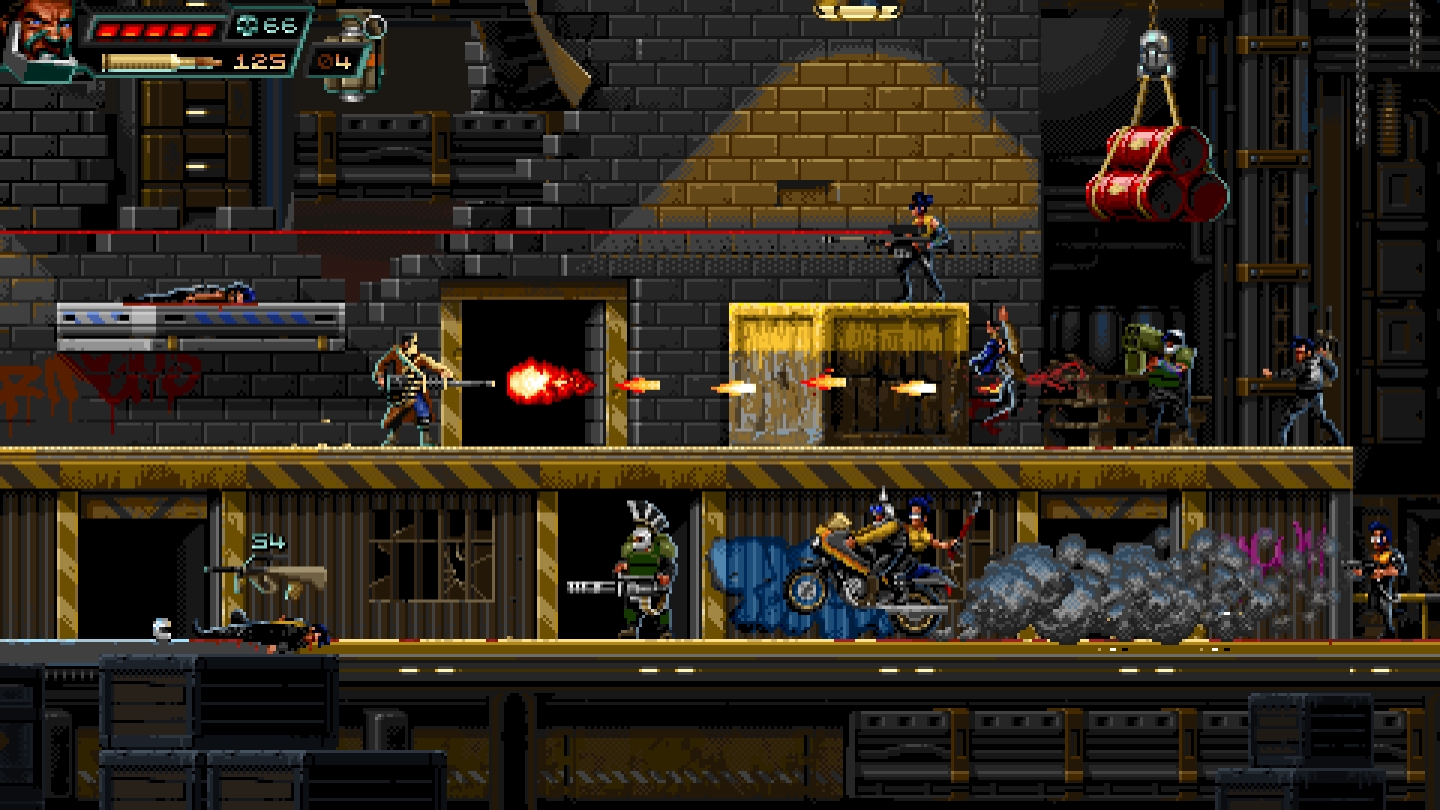 The odd thing, though, is that none of this polish is blatant, at least from an innovation standpoint. There’s no level that changes up the formula or throws players for a loop, like a sudden driving section or any kind of genre shift. Instead, Huntdown just simply has near-perfect level design. I don’t necessarily know how to go into greater detail about this, but that’s the ace in the hole. As you make your way through each stage, there’s just this natural flow with a terrific sense of escalation as everything advances. The combat areas are nice and open, making way for multi-level arenas at times, the enemy placement is precise and offers a terrific level of challenge at every turn, there’s the right amount of hidden or optional rooms with various secrets, be they the aforementioned briefcases or just more weapons and health…it’s all just nearly perfect.

Despite what I said back there about innovation, it’s not that Huntdown doesn’t change things up at times. With new settings and gang members come various new hazards and slight twists in each stage. Land mines here, an emphasis on vehicular enemies there, the introduction of armored and robot enemies, and more. They’re nice additions and ensure that the challenge level is always rising at just the right amount. It knows how how to perfectly fine-tune the gameplay as you advance in such a way that it never distracts from what’s important: that feeling as you charge into an abandoned subway station while you squeeze the trigger and douse a bunch of renegade hockey goons with hot death from your flamethrower, watching them flail around afterwards while fast-paced synth tunes play in the background, all whisking you away to your childhood days at the arcade or at home with a new Genesis game that you rented. That feeling, blended with Huntdown’s gameplay design, is the key to its success.

The cherry on top, though, would have to be the boss battles, with every level featuring either a gang leader or one of their captains to face off against the end and collect a bounty on. Now, the regular enemies put up a nice fight, being just the right amount of aggressive, attacking in groups that make you think quickly, and graduating to the likes of miniguns, sniper rifles and katanas later, always encouraging a level of strategy in order to figure out how to deal with them. But the bosses take it to the next level. All of them have unique personalities, all of them have unique arenas and attack methods, and all of them put up a superb level of challenge. We’re talking Treasure-level quality bosses here, which include the likes of giant mech fights, motorcycle-driven chariots, multi-stage body horror and more all so memorable that you’ll likely be begging for a Boss Rush mode. 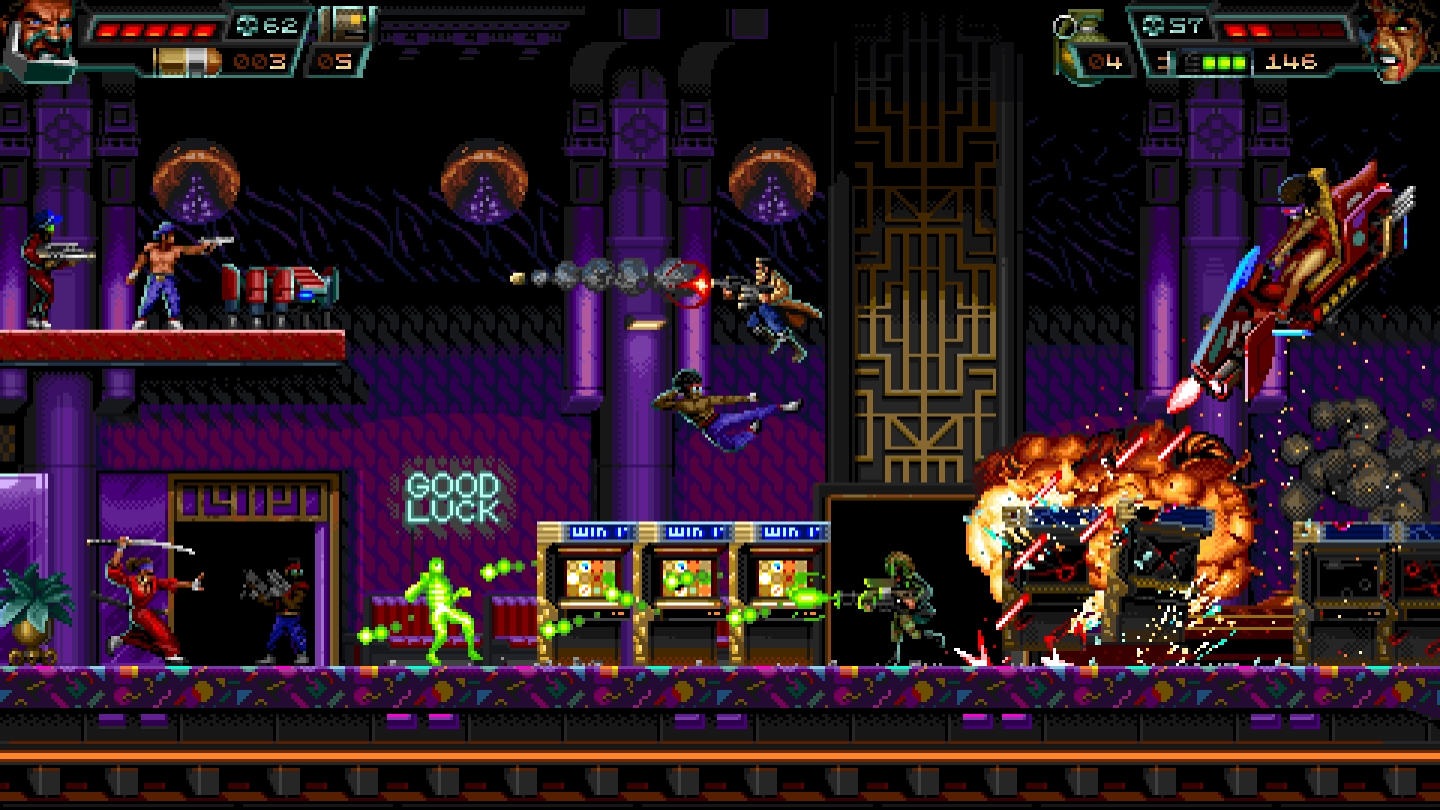 And yet, with all of this, there’s still the graphics and aesthetics to talk about. That perfect coating of ’80s cheese which the entire package of Huntdown is wrapped up in. Astonishing hi-bit pixel art shows us a world chock full of neon, KITT-esque cars, hoverboards, wrecked shopping malls and arcades, and more. Full voice acting is included, which allows for delicious one-liners straight out of an action film classic. Each gang member has their own Warriors-style theme that make for great enemy designs and appropriate backdrops. And the music perfectly fits the mood. It’s all designed to be as dumb-looking as possible where still coming off as badass and gorgeous, and it works.

That all being said, Huntdown does have a couple of issues that prevent it from being perfect. For one, there are instances of a few cheap hits at times. In particular, the knockback caused by certain attacks means that you can easily be launched into tricky situations that make it difficult to recover from certain scenarios. This is especially evident with the third set of levels, which mainly take place over several pits you can fall into for more damage (including one boss fight where one such blow can lead to three health bars being lost). Related to this, there are bound to be a couple of Demonic Spiders in the later levels that can get annoying (the flying enemies that can crash into you and the heat-seeking missile launchers were a bane of mine). Also, selecting different characters has to be done from the pause menu and requires a level reset, which is awkward.

But more importantly, there’s the length. True, this is a game modeled after classic arcade games, so one may not arguably expect something long. Still, with only twenty stages, it’s likely that skilled players can finish the game in a few hours. And while the secondary objectives are a nice touch (though they could have benefited from a little more variety), they don’t seem to actually unlock anything…that I could uncover, at least. There’s an unlockable “Badass” difficulty mode, though, which does add a bit of replay value for the hardcore kind. Still, maybe one more gang of colorful murderous miscreants would have helped? 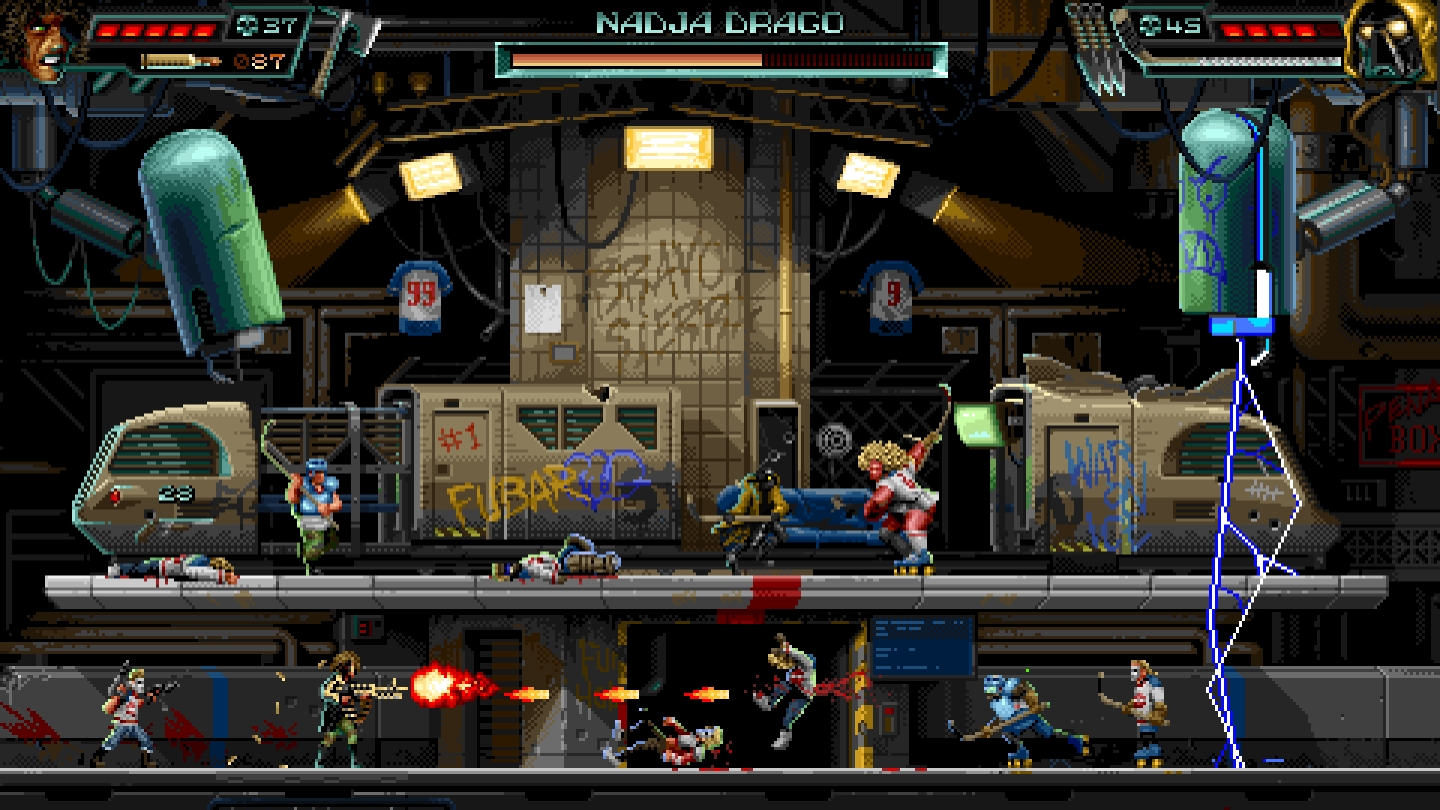 Huntdown is awesome, plain and simple. The action is intense and extremely fun, with big, superb levels, tons of firepower to work with, and a cavalcade of amazing enemy encounters and even more amazing bosses. Huntdown is an extremely enjoyable romp that does its coin-op predecessors proud when it comes to satisfying gameplay and perfectly-executed graphics, earning its spot alongside the other retro indie greats…or just alongside other great action games, period. If you’re reading this, then just go and buy it. You will most assuredly not be disappointed.