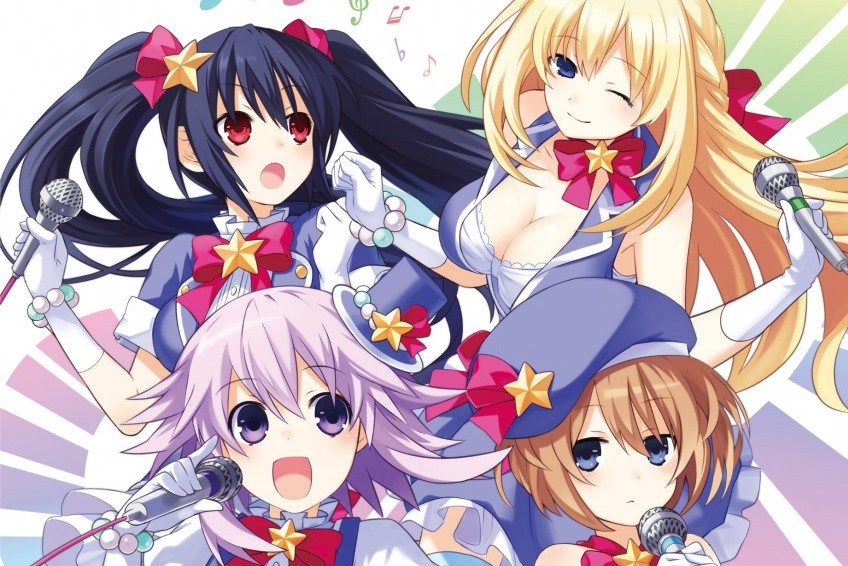 If players are showing up for Producing Perfection to continue their usual JRPG endeavors in the wonderfully strange world of Hyprdimension Neptunia, then they are going to be sorely disappointed that this latest title in the series is anything but a roleplaying game. Forgoing those typical conventions, Producing Perfection treads new water by tackling the idol simulator genre that has been wildly popular in Japan for some time now. But sometimes first outings turn out to leave a lot to be desired; other times, they’re out-of-the-park homeruns. Producing Perfection certainly shoots for the latter, but comes up short, unfortunately putting it more so in the former category.

Hyperdimension Neptunia: Producing Perfection puts players in the role of a popstar manager, helping their chosen female soar to the top of the charts and dominate the competition through stage performances and public relations. See, in the world of Producing Perfection a new idol group by the name of MOB48 (that’s a reference to the actual Japanese pop sensation, AKB48) has taken the world by storm. They are growing in popularity so much that they have begun to actually take “shares” away from the CPUs goddesses (Neptunia, Blanc, Vert and Noire), thus resulting in our four protagonists banding together to take on the pop world themselves. Whether they each are going at it alone, or teaming up to form a super-group of their own, it’s all up to the player to figure out how to take them from zero to hero and win back those diverted shares. 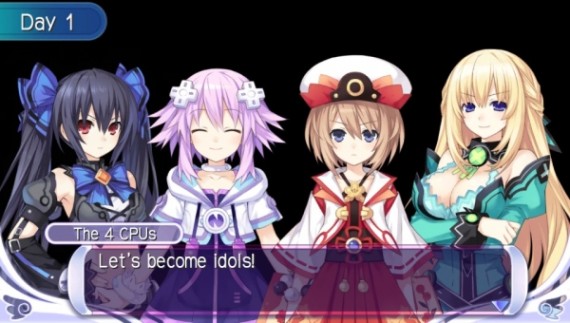 It’s easy to see that Producing Perfection continues the Hyperdimension trend of presenting a ridiculous premise and allowing folks to watch how all the debauchery unfolds. Though this title in specific is in a bit of a tough spot seeing as it has a ton of dialogue and text, but clearly doesn’t ever emphasis a true storyline. Thus, players will read quite a bit here, but it’s all rather meaningless since the overarching narrative never feels front and center, or particularly compelling at that. That being said, PP also makes very little effort to win over newcomers or those who are simply not familiar with the franchise’s established lore. As a result, much of the in-game chatter will totally fly over a player’s head if they are unfamiliar with the brand. Sure, there are tons of jokes on display for series veterans, but those moments are so shrouded in a need to have played the previous games or at least know the characters, that players who do not fall within that category are going to feel left out of most of the game’s inside humor. This feels like a missed opportunity for two specific reasons: 1. the game is going to have a hard time expanding itself to a larger audience; and 2. despite the super solid localization, even we found ourselves just skipping over much of the dialogue, not because we are new to the Neptunia universe, but because the dialogue between players and their pop-gal is extraneous and generally devoid of substantive value. As a result, we simply couldn’t devote the effort needed to read the conversations that would routinely drone on and on for minutes on end.

That being said, Producing Perfection isn’t a JRPG like those that came before it, so we can only put all of our stock into it’s obviously neglected story. This is an idol simulation game at its heart, which means the true experience lies within the mechanics of how one goes about turning their girl into a right pop-star. The main purpose in Perfection‘s gameplay is to increase one’s fanbase; more fans translates to more shares, which in turn means the CPU’s influence in Gamindustri is no longer in danger of being stripped away completely. So players first start by choosing one of the four previously mentioned CPUs to manage and then start the long trek to chart-topping songstress. From there, players have management over nearly every aspect of their chosen character’s career, and must effectively direct these domains. One of these domains is the logistical, back-end side of pop-star management: scheduling and making appearances at events, media shows and other public relation endeavors. These more administrative duties are one of the primary means of promoting a CPU’s presence in the music world. After that, players can then train their characters in a number of fields, like vocal fidelity in addition to dancing aptitude, and also give their idols time off from work, so as to manage their stress levels properly — a frazzled, distressed idol equates to poor performances in training’s, PR stints and even live gigs. Hence, knowing when to give a CPU some rest and relaxation is paramount to climbing the ladder of success. Over time there’s an option to form super teams with other CPUs too, which further increases one’s chances to surpass MOB48’s fame. 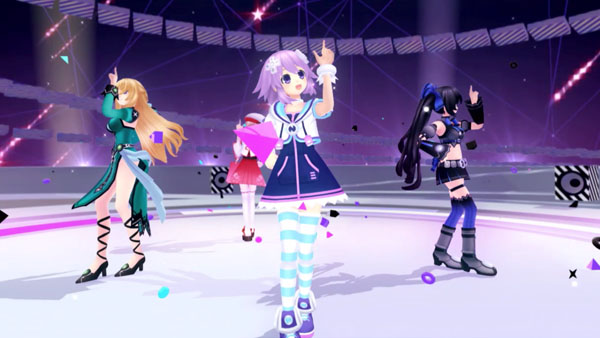 Ultimately, one of the primary challenges in Producing Perfection is in using one’s time in the most efficient way possible. There are only a certain amount of days that players have to take their idol from nothing to out-and-out marvel. Thus, with each training, business or relaxation event devouring an entire day’s worth of in-game time, the player has to be aware of how to best spend their days, for needlessly wasting time can result in utter failure, which of course affects the ending one will get. Thus, dawdling around through fruitless PR or training sessions can have a profound influence on the provided time table as well as the idol’s capacity to function at the best possible level. Consequently, generating a game plan on how to get the most out of the story mode’s limited number of days is vital to the entire experience. This aspect of Producing Perfection feels fulfilling to a degree, as planning ahead and then seeing those plans fall right into alignment is a rewarding feeling.

But then there are the actual stage shows themselves. Without a doubt, this is the most disappointing aspect of the game, especially considering what other idol simulators have done with in-game performances. Seeing one’s hard work payoff through an engaging performance segment that has folks involved hands-on with how their idol performs, through directing their choreography and the like, can be the most satisfying aspect of any idol simulation title. Here, however, this mechanic has been stripped down to sequences that are merely observational moments, as players don’t have really any direct control over their girl when they’re on stage. Instead, the developers have opted to only give players the ability to initiate stage effects (such as special light shows, confetti, pyro, etc.) and direct the camera. Sure, they can choose which stage their star will perform on, as well as which song they’ll sing, but even those options are limited, only offering up a small handful of options. Thus, the very pinnacle of the gameplay experience is ultimately a colossal letdown, especially when taking into consideration what the stage performances mean, both in terms of how they’re built up in lore as well as actual training’s. 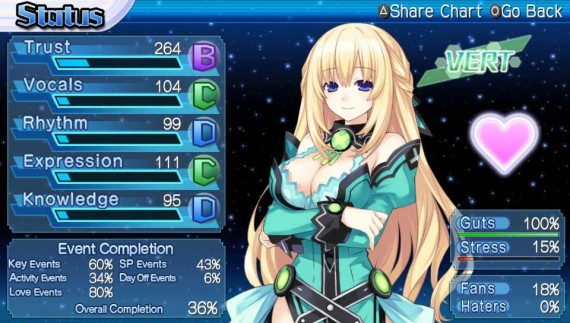 Unfortunately, this is the bulk of the experience, too; plan, train, watch star perform…rinse, repeat It’s a tiresome system that isn’t made any better by the general lack of true gameplay. That’s Producing‘s biggest problem: there’s hardly any real “game” to play, and when it is presented to players, what they have to work with simply isn’t very compelling. Initially, the game has a kind of charm about it that may keep folks firing it back up for just one more training session. But the novelty wears off quickly after it’s easy to see that Perfection shows its entire bag of tricks within the first hour of play. Moreover, as an idol simulator, we never felt like we were simulating much of anything other than menu navigation. There aren’t any hardcore numbers or stats to crunch — thanks to the leveling system that is at times random with how it allocates attribute points upon completion of a training or event — and there was never any real sense of investment in a “career” for our gal. By proxy, there was not a strong desire to ever see her succeed on the charts either. Sure, it was swell to see how our performances and training paid off with a chart position, but even the charting process feels aimless and like a game of total chance itself.

The game isn’t all bad, though. In fact, the ability to unlock costumes and mix and match various sets of clothes for stage shows is fun. There weren’t enough unlockable outfits, but what was there was still diverse enough to keep us compelled to switch up our girl’s clothes for each individual performance. And then we have the production values, which are very clearly the title’s strongest aspect. Plainly put, Hyperdimension Neptunia: Producing Perfection is a great game to look at; the art is clean, character portraits are expressive, backgrounds are candy-colored and vibrant, the menu interface is slick, and the actual “graphics” during performances are solid enough. Moreover, the accompanying audio is a treat as well. The soundtrack is bubbly, light-hearted and for all intents and purpose form-fitting to the zany style that is Hyperdimension. As a game that is rooted in music, it’s nice to see Producing deliver on this front. There’s even a dual audio option, so folks wanting a subbed or dubbed experience will have their pick. The acting here is a bit all over the board, but in general, the ladies nail their parts, making for a game that can be played with the English voice-overs turned on, for once.

There’s also a few sparing modes that are a bit of a saving grace, too. Outside of the core Producer Mode that we talked about, there’s also Unlimited Concert and Viewer modes, the former of which is a chance to set up custom concerts, complete with back up dancers and a few more options than those presented in the main story mode, and watch the theatrics go down. The latter Viewer Mode just lets folks dress up the four CPUs and check them out from different angles. These aren’t going to drastically alter the experience, but their mere inclusion is a welcome addition to a game that will need help in any way it can get it in order to sell copies. 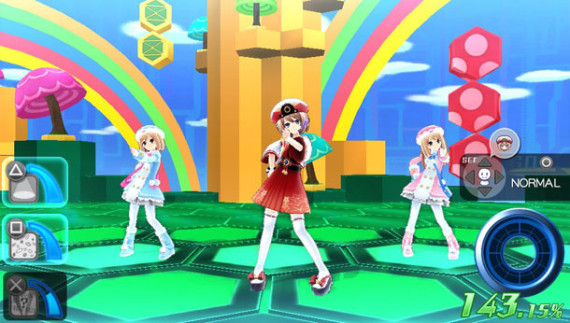 To get the most out of the experience, Producing Perfection practically mandates that its players have some kind of working knowledge of the Hyperdimension world to enjoy its trappings. If players are in that category, then perhaps there’s enough here to sustain interest, as the excessive dialogue is really only entertaining for those who know the characters and established lore well. Still, even those folks might be put off by the exhausting repetition that permeates the game’s very existence on a number of critical levels — a type of repetitiveness which would be tolerable if what players had to repeat were sound gameplay conventions, but alas they are not by and large. If players do not fall within the aforementioned fan parameters, though, then Producing Perfection will likely feel like a stale, unsubstantiated simulator that lacks the necessary gameplay mechanics to engage an audience. Moreover, it seems especially hellbent on keeping uninitiated Neptunia fans from ever feeling as if they’re anything other than on the outside looking in for the majority of the ride, really only directing its story and inside jokes at those in the know. Bottom line: this is a game that only the absolute most diehard Hyperdimension enthusiasts may enjoy, and even that is up for debate. Those wanting a deep, rewarding idol simulator, however, will have to wait until the next one arrives stateside.