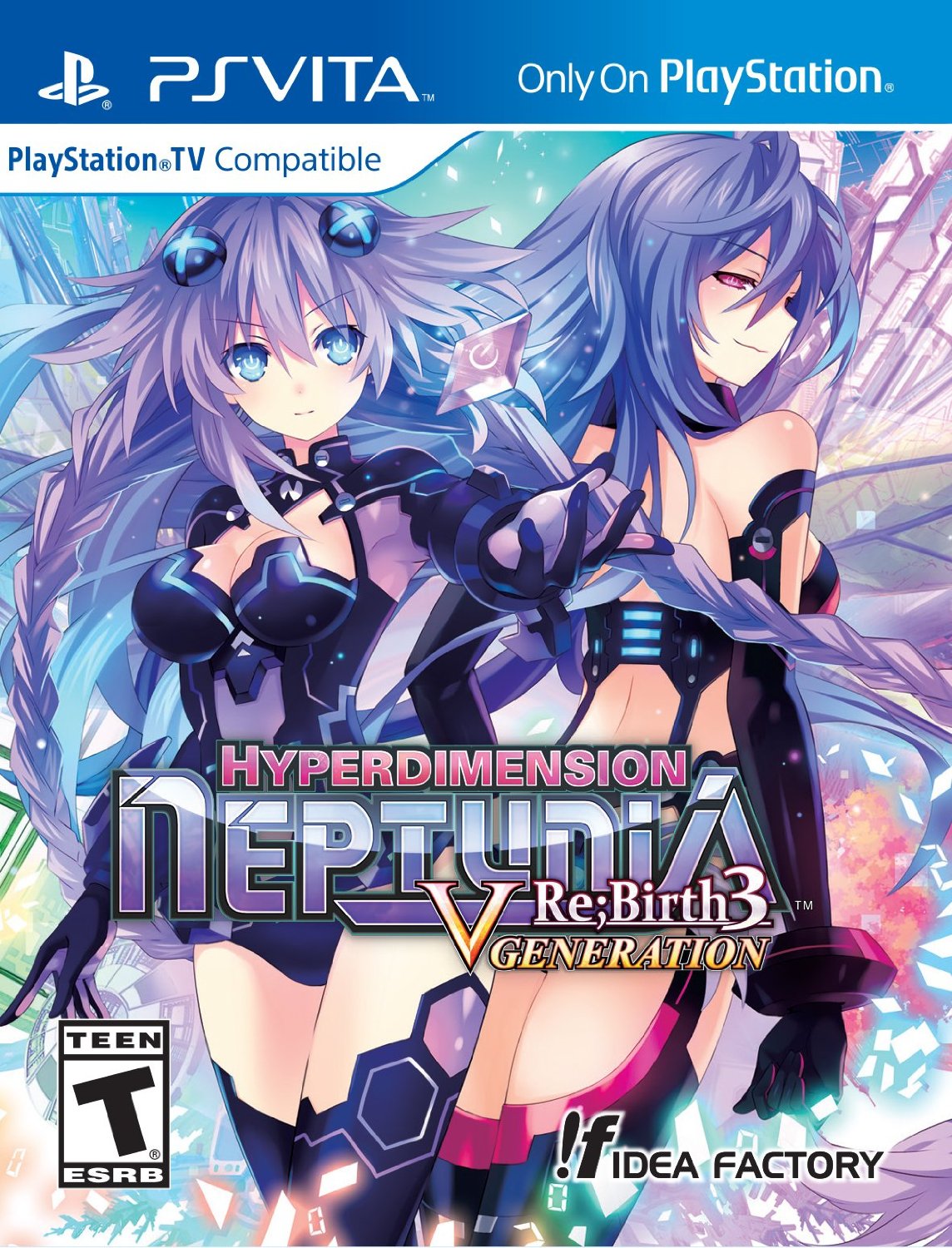 Man, oh man, have English-speaking Hyperdimension Neptunia fans been getting spoiled lately! Not only have we seen the continued proliferation of PS3 remakes on Vita, but we’ve also received Steam ports and copious spin-offs. It’s either the absolutely best time to be a fan (more games!) or worst time (expensive games!). In any case, Hyperdimension Neptunia Re;Birth 3: V Generation continues the trend of portable remakes and is based off Hyperdimension Neptunia Victory which launched on North American PS’s back in 2013. Chances are, if you’re looking at playing this game then you’re either a fan of the original series, or the Re;Birth releases. Even if you’re not, there’s not really any necessity to play each in order as each stands well enough on its own as the basic storyline is easy to grasp.

Hyperdimension Neptunia takes place within Gamindustri, a realm where the “console wars” are actually codified into different nations. For example, Lastation is effectively home to fans of PlayStation products while Lowee is the land of Nintendo lovers. All references in the games tend to be of this very obvious nature and are amusing for that reason. If you’re looking for some deep criticism of the gaming industry, you won’t find it. Cute anime girls based off consoles and game companies, though? Oh, they’re everywhere. With all that said, there are some tweaks to Hyperdimension Neptunia Re;Birth 3 which make it a release more attuned to the sensibilities of existing fans.

This is because it actually takes place in an alternate dimension from the regular series. For whatever reason, Planeptune’s CPU Neptune spontaneously finds herself transported to another realm. Instead of being with all her buddies back in the “real” world, she is transported back to 1989 — and this also happens to be a timeline where no one knows who the heck she is. At the start she can’t even utilize her CPU form because Planeptune is controlled by an entirely different CPU named Plutia in this realm! 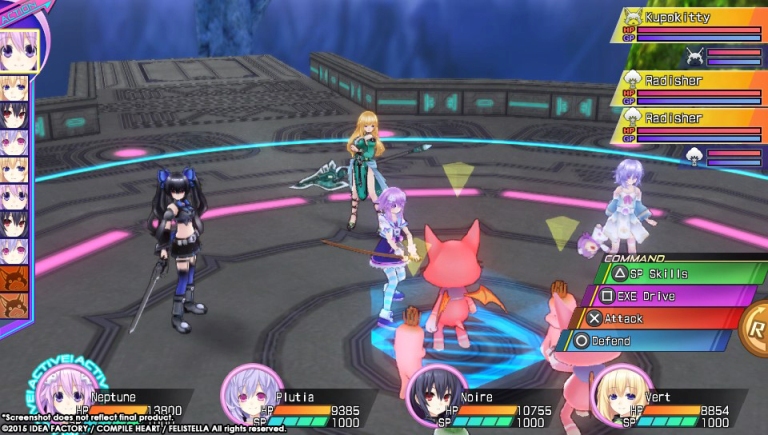 After a bit of finagling, the two timelines are able to communicate, but poor Neptune won’t be able to return home until she does something about the Seven Sages. These are seven distinct bosses who want to do nothing but harm to Gamindustri.

Those who have ever played a main series Hyperdimension Neptunia game know exactly what to expect from combat in Hyperdimension Neptunia Re;Birth 3. You collect quests on the world map, enter a dungeon, and go forth beating up everything in your path until story quests are completed. As all enemies are displayed during dungeon exploration, you can skip past some as you want, but often it’s better to just take them head on. Fights are turn based and also reliant on players maneuvering their teammates each turn to get the most effective hits on enemies. With that said, the strategy component isn’t that high, but the movement portion does make it harder to mindlessly grind to gain levels. 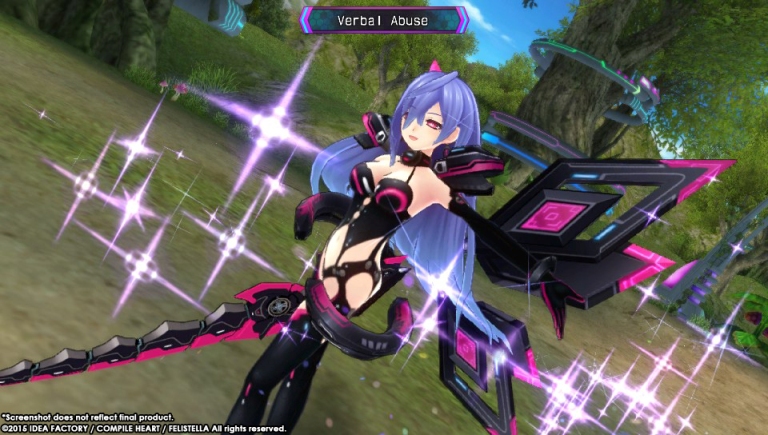 Difficulty is about average as far as the series is concerned, meaning that most RPG fans should be able to make it through without too much issue. If there is any problem, however, players can utilize the Remake System which has been implemented to each Vita release. This allows players to increase or decrease difficulty, craft special items, and change the creatures set to spawn in dungeons, among other things. It’s detailed very briefly in this release for whatever reason so don’t forget this option is available! There are a few other tweaks that the third game in the series brought to the table, but as a whole the only thing that really matters is the main game.

Dialogue in this series has always erred on the side of silly/fanboy-focused, and at times warrants some serious eyebrow-raising. Although many consider the height of this creepiness to exist in Hyperdimension Neptunia Mk2/Re;Birth 2, to me it’s in Hyperdimension Neptunia Re;Birth 3 where this aspect really “shines.” It’s all thanks to the new character Plutia, who is happy-go-lucky most of the time but becomes a sadomasochistic creeper when in CPU form. There’s nothing wrong with that in and of itself, but she becomes downright predatory toward Neptune and company. Although her harassing nature is played off as a big gag, it feels crueler than intended, at least in English. Of course, if you’ve gone through the rest of the series already something like this is very unlikely to faze you much. 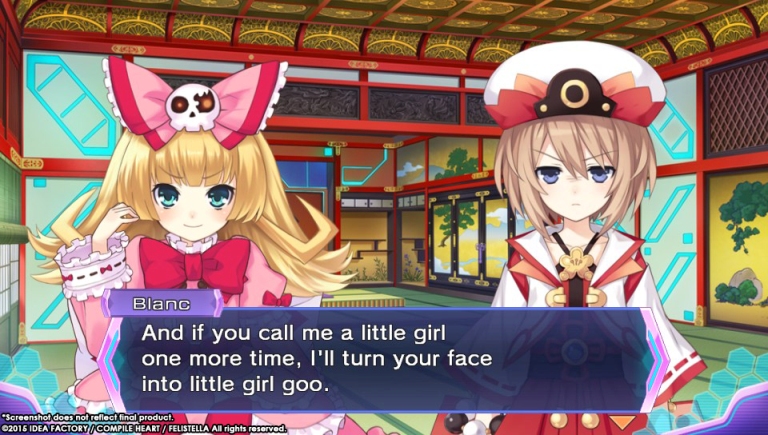 At this point in time, having replayed the entire first three games in the series, things are beginning to feel incredibly worn out. Yet again we see that landscapes, enemies and music are reused to a massive degree. Sure, these releases come from what was originally a “budget” style publisher, but considering how successful these games must be to warrant new copious releases, couldn’t they break out of these habits? Perhaps not for this remake, but hopefully it will happen with future releases. If not, there’s really only so much that a fan can take before finally getting tired of the same old thing. With that said, if you’re just seeking a way to get your RPG fun in on the go, and love yourself this console-parodying cast, then it’s yet another title to stick in your Vita. Hyperdimension Neptunia Re;Birth 3 does nothing to reinvent the formula, and instead happily situates itself in a cutesy, but mostly average status quo position.