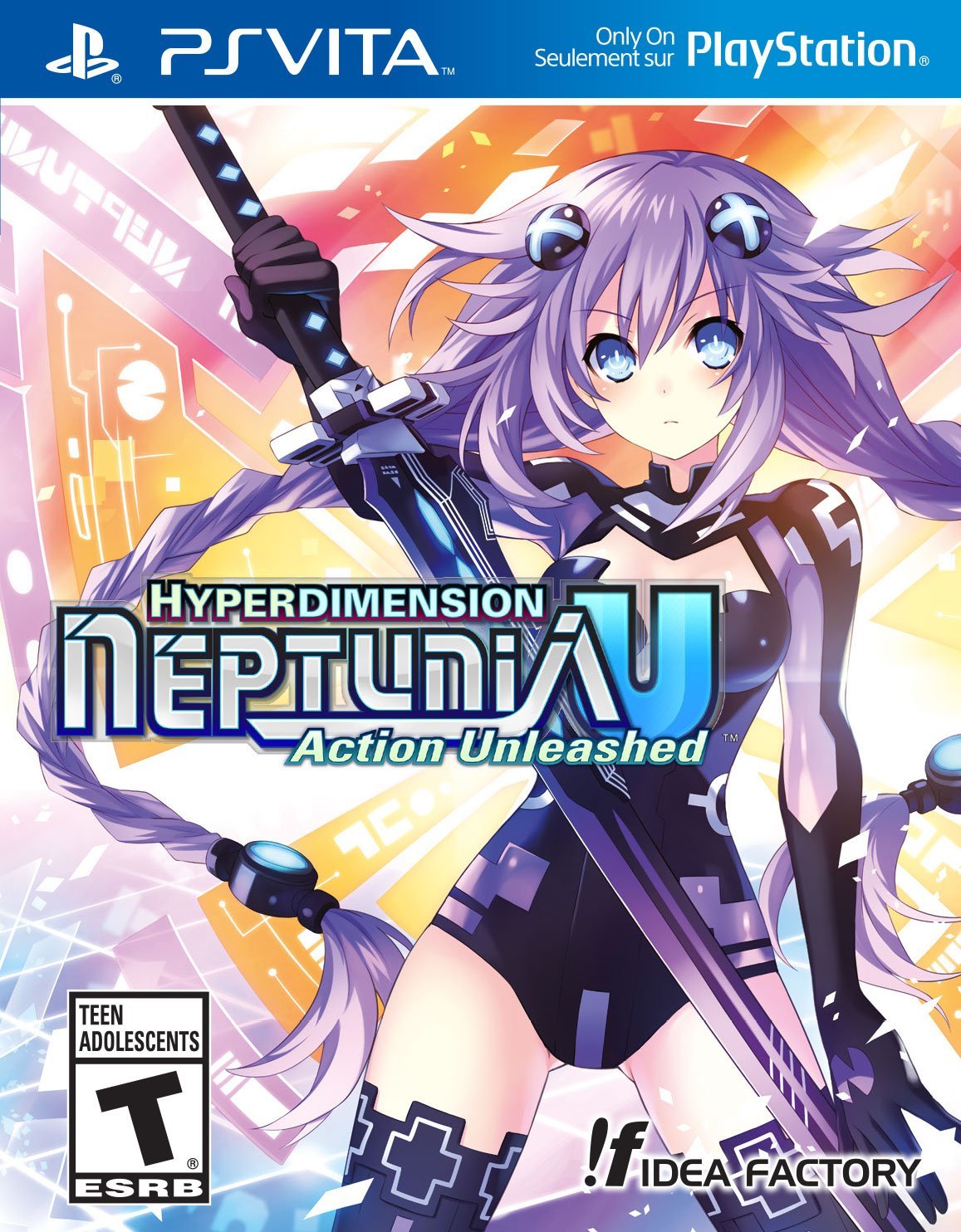 Who could have ever guessed that the Hyperdimension Neptunia series would not only take off in the West but that its multitude of spinoffs would also reach our shores? From idol sim to turn-based strategy, the series has departed quite far from its JRPG roots. The latest of these departures is none other than Hyperdimension Neptunia U: Action Unleashed for Vita. This time the world of Gamindustri has genre-hopped over to hack n’ slash. In order to give it the best chance of success, Compile Heart even handed development over to Tamsoft, the team best known for Senran Kagura. Considering that developer’s existing ability with beat ‘em ups, it seemed like a perfect fit.

Hyperdimension Neptunia U provides perhaps the meagerest story yet (outside of Producing Perfection) wherein all the CPUs and CPU candidates are just having a lovely time until Famitsu and Dengekiko both propose writing articles about them. In order to do so, the goddesses must be subjected to exciting quests. It seems that someone else is in control behind the scenes, however, ensuring that monsters continue spawning, leading to a huge span of quests to appear. Your goal is to complete a majority of the quests to push the story forward to eventual completion. Although some quests offer story banter, most offer nothing at all or just a completely frivolous aside. Although involving stories have never been the core of this series, there was at least character building and hilarity. Even the latter aspects feel toned down to a strange degree here.

As might be expected, the focus this time is purely on gameplay. Every quest is effectively the same in that your goal is to kill stuff 90% of the time. Every so often you’re looking for items to drop but, hey, that still requires beating up monsters! Quests allow players to bring two goddesses into battle (a few only allow one) but both aren’t playable at the same time. Instead, you have one CPU or CPU candidate controlled until you choose to swap between them. This is useful because if one is low on health you can quickly change to a full health character. While the other character is not in use they’ll even regain health slowly. The better the active character fights the quicker the other’s gauge fills up as well. 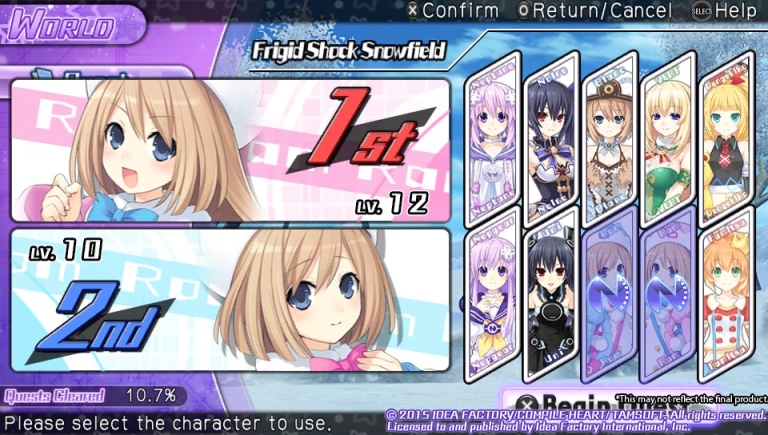 Most of the time you can choose from any of the following characters to bring to battle: Blanc, Dengekiko, Famitsu, Nepgear, Neptune, Noire, Ram, Rom, Uni, Vert. Every once in a while you’re assigned character-specific quests, though. These prove annoying for players who prefer to level up one or two characters rather than focus on constantly rotating teammates around. From the cast, each gal can also access a HDD mode. Yes, even Famitsu and Dengekiko despite their non-CPU status. It’s mostly just to grant them access to the same ultra powerful moves as the rest, as they don’t even get their own special artwork. As with previous Neptunia games, Lily Rank exists here as well, although its importance doesn’t become apparent until late in the game – about ten hours in.

Here’s the thing about Hyperdimension Neptunia U: the gameplay simply isn’t engaging. Yes, it is quite cool to watch the attack animations of each character the first few times and seeing the different combos you can perform to clear out monsters looks worthwhile. But then you quickly see how similar each quest turns out to be, and just how many monsters the game dumps at you. By the time you’ve entered the third and final chapter you’re forced to kill off 1,000+ enemies at times. If fighting itself is completely lackluster, just imagine how mind-numbing it is to complete quests where fighting X number of baddies is the goal. None of the gameplay appears outright broken, but there’s nothing here to compel people who aren’t already devoted to hack ‘n slash games. 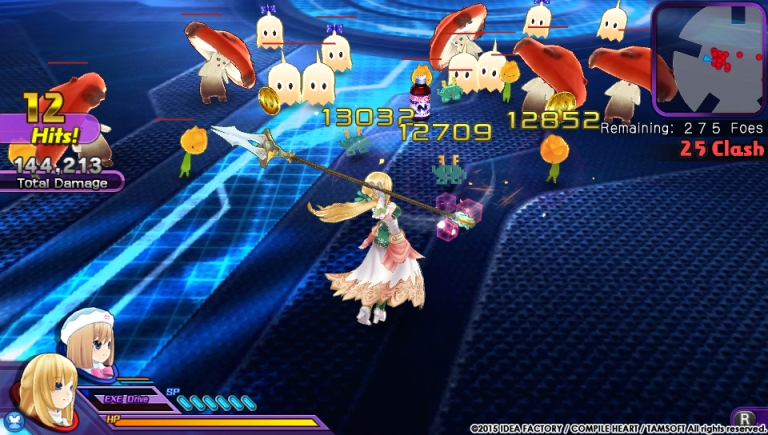 Unlike most Neptunia titles, there’s not even much of a cutesy storyline to chase after. The conclusion to Hyperdimension Neptunia U’s main mode is completely lackluster, ending without any dramatic flair whatsoever. Once you beat the final boss you get a droll storyline wrap up, nut at least you get a new mode for your troubles: Gamindustri Gauntlet. This turns things into a tournament between the CPUs/CPU candidates and is just more of the same routine battles in a different wrapper.

Once you win once the final mode, Neptral Tower, unlocks. This final mode is incredibly challenging because it requires players to ascend a multi-level tower successfully with each character. Although the main game takes under 15 hours to complete, Neptral Tower could easily double the time span due to needing to grind the cast until they’re strong enough to win. 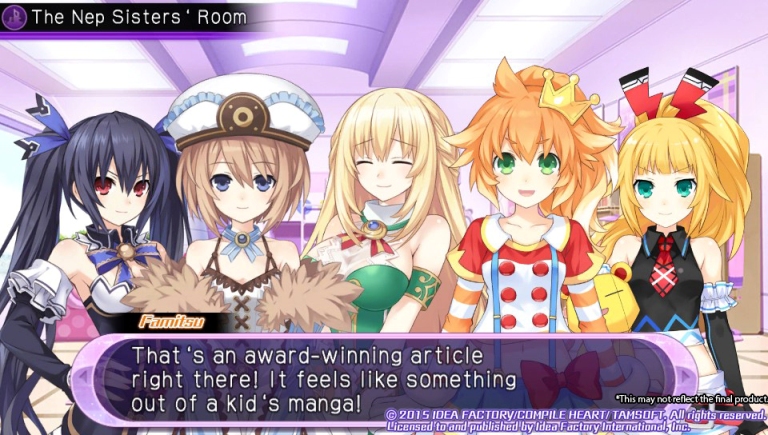 Existing fans of the Hyperdimension Neptunia series may feel a bit like lab rats being consistently subjected to different genres while the next main RPG is in the works. It would be acceptable if every game were a masterwork of its respective genre, but of course that isn’t the case here. Hyperdimension Neptunia U: Action Unleashed offers a fairly robust playtime if you go for 100% completion. It also manages to be free of bugs, glitches, or even typos, but none of that turns this completely average gameplay into something more engaging. Without that key element, it just feels absolutely ordinary.