Best known for their peripherals, such as their stellar headsets, HyperX has been becoming more well known over the last few years for PC components, most especially with their Savage and Fury lines of SSDs. Granted, Kingston in general has been doing PC components, such as RAM, for decades, but the HyperX brand has been becoming more involved with the enthusiast and gaming crowds. Continuing with that, we are getting brand new solid state drives that will no doubt go perfectly with those with expensive gaming rigs that have put their hard earned money into. We got to take a test run with the HyperX Fury RGB 480GB SSD and came away somewhat impressed with its performance, but most in particular its flashy design. 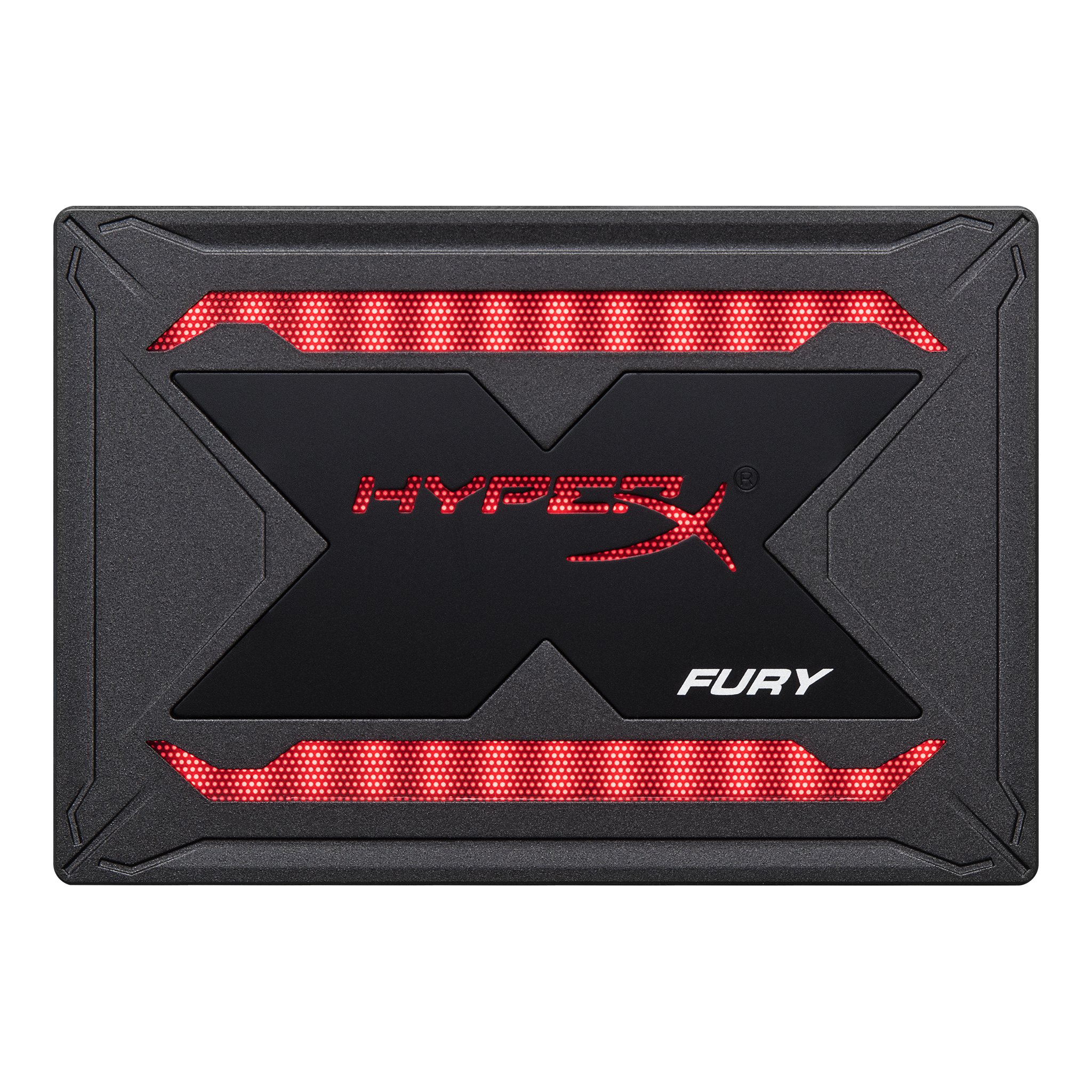 One of the biggest draws to the HyperX Fury RBG SSD is its outer design. It feels like most 3D NAND and modern SSDs have hit the throughput, at least for standard sequential data, where in comparison to other drives ends up showing minimal differences, so while they’re improving 4K sequential read and other factors, manufacturers are looking to add different elements to attract users. For HyperX, it’s lighting. As the name suggests, the HyperX Fury RGB is a new Fury SSD model enclosed within a new design that features fully functioning RGB lighting. You will need to properly mount this somewhere in your PC to fully utilize it, because it’s only the logo and two strips on the top of the drive, but they certainly will illuminate your PC with color in a glorious manner. You will also need a standard four-pin RGB connector on your motherboard to take advantage of it, which HyperX generously includes a cable for.

It should be stated that this is one of the heaviest, weighty SSD we’ve ever held. It ranges between two-to-three times the standard weight of an SSD, and even heavier than a hard drive, coming in at 165 grams. This is thanks to the metallic exterior of the drive, where it gives it enough weight that if you threw it at someone, you could do some damage. In addition, if you’re buying this to replace an existing drive with your operating system on it, HyperX has made it even easier. Every HyperX Fury RGB SSD sold comes with Acronis True Image cloning software, which is something I personally would recommend even outside of the drive. You’ll find a lot of companies that throw in second-rate software just to make things a little easier, so it’s nice to see HyperX going all out and including one of the best cloning products out there. 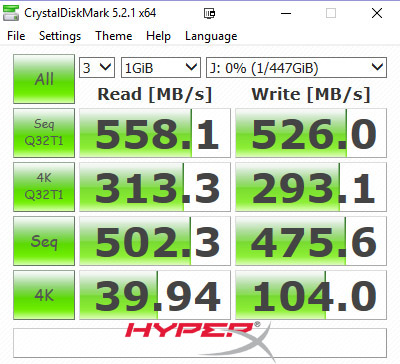 Unfortunately, whether it has to do with the metallic design or other factors, we found the HyperX runs hotter than most SSDs, coming closer to NVMe sticks and standard hard drives. We averaged standard solid state drives at a breezy 25C, with the NVMe doubling that. Unfortunately, when it comes to the HyperX Fury RGB, it managed to maintain a temperature of 39-41C throughout our time with it. Even with the RGB lighting disconnected, this didn’t seem to make any difference. Granted, this is still very much in the preferred temperature range, but it definitely runs hotter than everything else we’ve tested.

In terms of speed, the Fury RGB reaches close to (if not more) the maximum SATA III bandwidth limitations, hitting an easy 558.1 MBps read and 526.0 write. Increasing the block size will net you slightly slower reads and writes at around 502.3/475.6 MBps respectively, which is a pretty standard 10% drop. The 4K Q32T1 random test was a little lower than we would have liked as comparing to Western Digital’s Blue 3D NAND it’s 16% slower read and just over 14% slower write. Fortunately, the standard 4K read was running strong at nearly 40 MBps, but its write is lacking. Overall, it’s a solid drive for performance, but isn’t the best available. 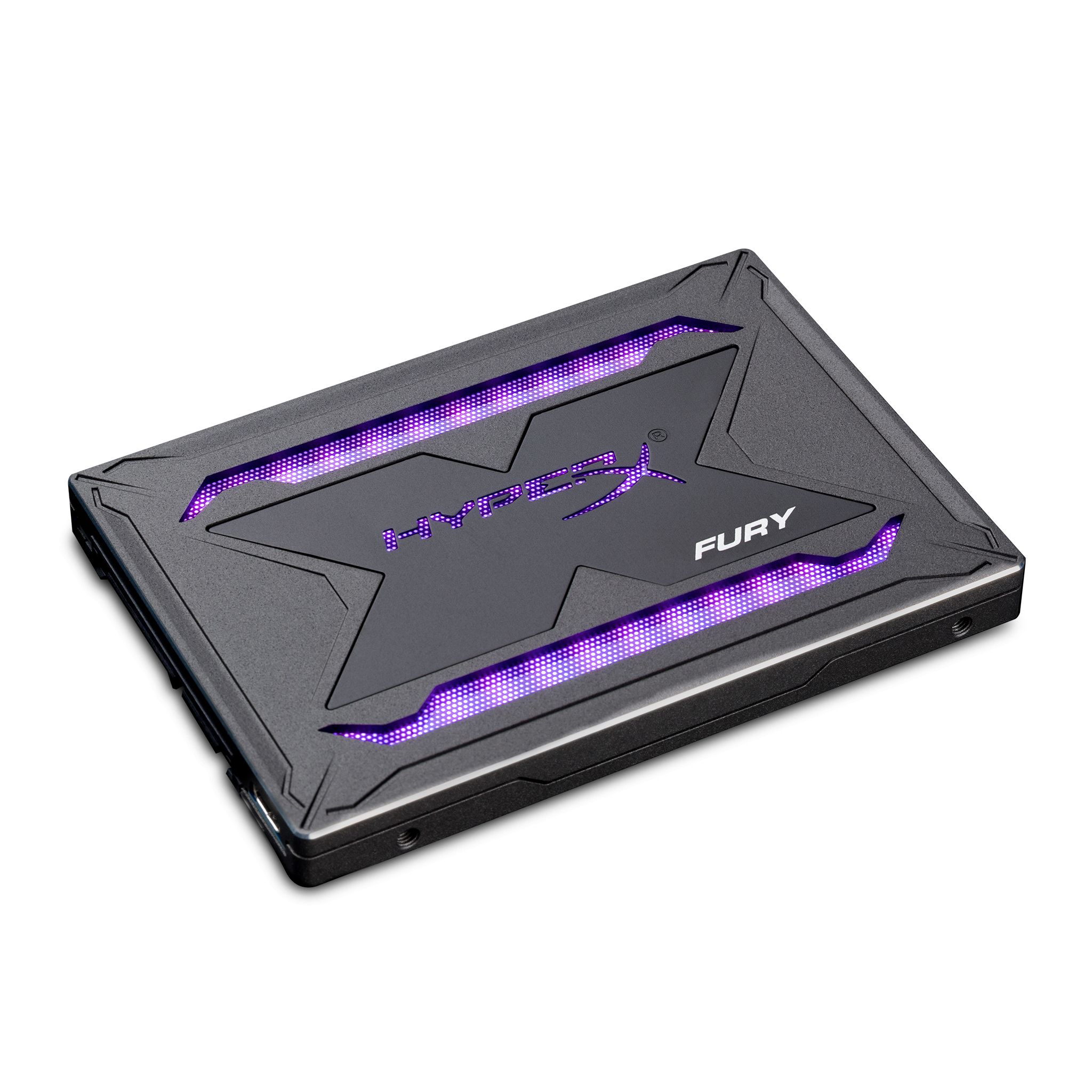 The HyperX Fury RGB will wow consumers with its strong presentational values, but at the same time won’t exactly be at the top in terms of performance. That’s not to say it’s trailing the best by much, but its average data rates are a lower than say Western Digital’s 3D NAND option, with the exception of 4K read speeds which does surprisingly well. It does run a little hot, about 50% that of a regular SSD, but that still falls into acceptable temperatures. Regardless, it still packs quite a punch, and the sleek, metallic design and RGB lighting certainly allows this to be a very appealing package for those with a fancy setup. Because of this, though, this is primarily built for PC enthusiasts and won’t do much for those looking for a new SSD in their console or laptop.