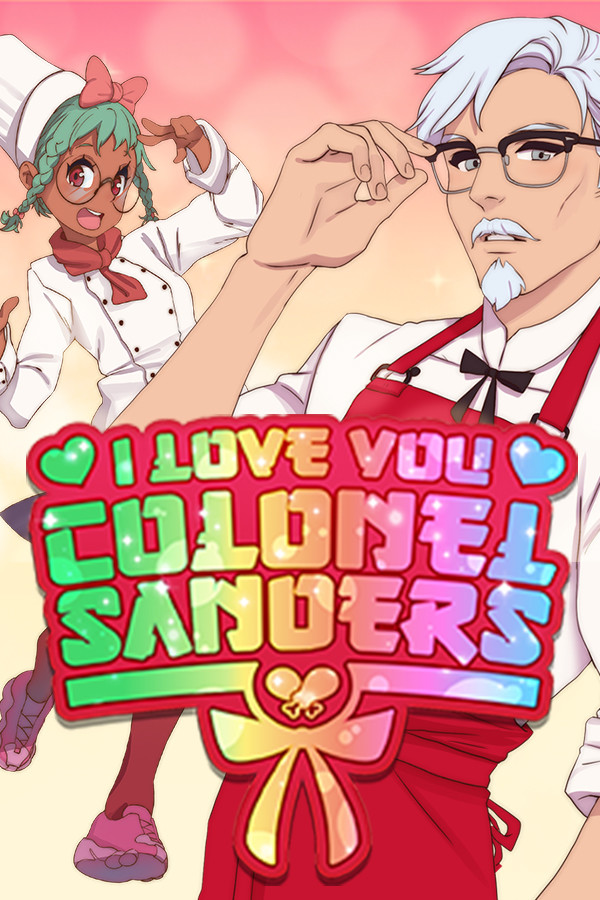 I Love You, Colonel Sanders!

When news broke that KFC were making a dating sim, gamers were both shocked and amused by the hilarious announcement. There was not as much discussion about its role as a marketing tool — though it clearly is one. Now that I Love You, Colonel Sanders!: A Finger Lickin’ Good Dating Simulator is out we finally know if it’s actually worth playing or not. It really depends on your expectation of a “KFC dating sim” as to whether or not it’s worth spending the time and hard drive space to take this title for a spin. Fortunately, it’s completely free to download on Windows and Mac. There is no paid DLC or any other means of the game directly generating money from players.

I Love You, Colonel Sanders! begins with our nameable (but faceless) protagonist waking up on their first day of school at the prestigious University of Cooking School: Academy for Learning. In an interesting, but possibly unintentional decision, the protagonist is never gendered. As they arrive at school, they’re immediately inundated with a cast of strange classmates. There is your best friend Miriam ready to help you out in a pinch. There are two rivals Aeshleigh and Van Van — though they’re more comic relief than serious enemies. Also in tow are a handful of other classmates such as Pop, who for some reason looks like a child, and Clank, which is clearly a machine. Your teacher is a talking corgi to keep things weird. Finally, there is Colonel Sanders himself!

Given that this is a visual novel focused on romancing Colonel Sanders, he’s depicted as quite the handsome fellow. He maintains his signature white hair and beard but otherwise looks a fair bit younger than his visage plastered on KFC restaurants. Although he’s just another student, he is far better at cooking than basically any of the other students aside from the protagonist. Throughout the short game you’ll be thrown a handful of dialogue choices. Some don’t affect much while ones pertaining to the Colonel determine which ending you receive.

This is not a terribly difficult game to get the best ending for. Simply talk to Colonel Sanders about topics that would interest him. Spoilers: he’s apparently only interested in talking about food, and in particular, items that might appear on the KFC menu. It’s a shallow experience in regards to choice because it’s not like there are any other romanceable characters to choose from. Also included are a few pop quizzes which mostly prove an exercise in frustration. If you fail then the game ends and you’ll have to keep plugging away until all questions get answered correctly. 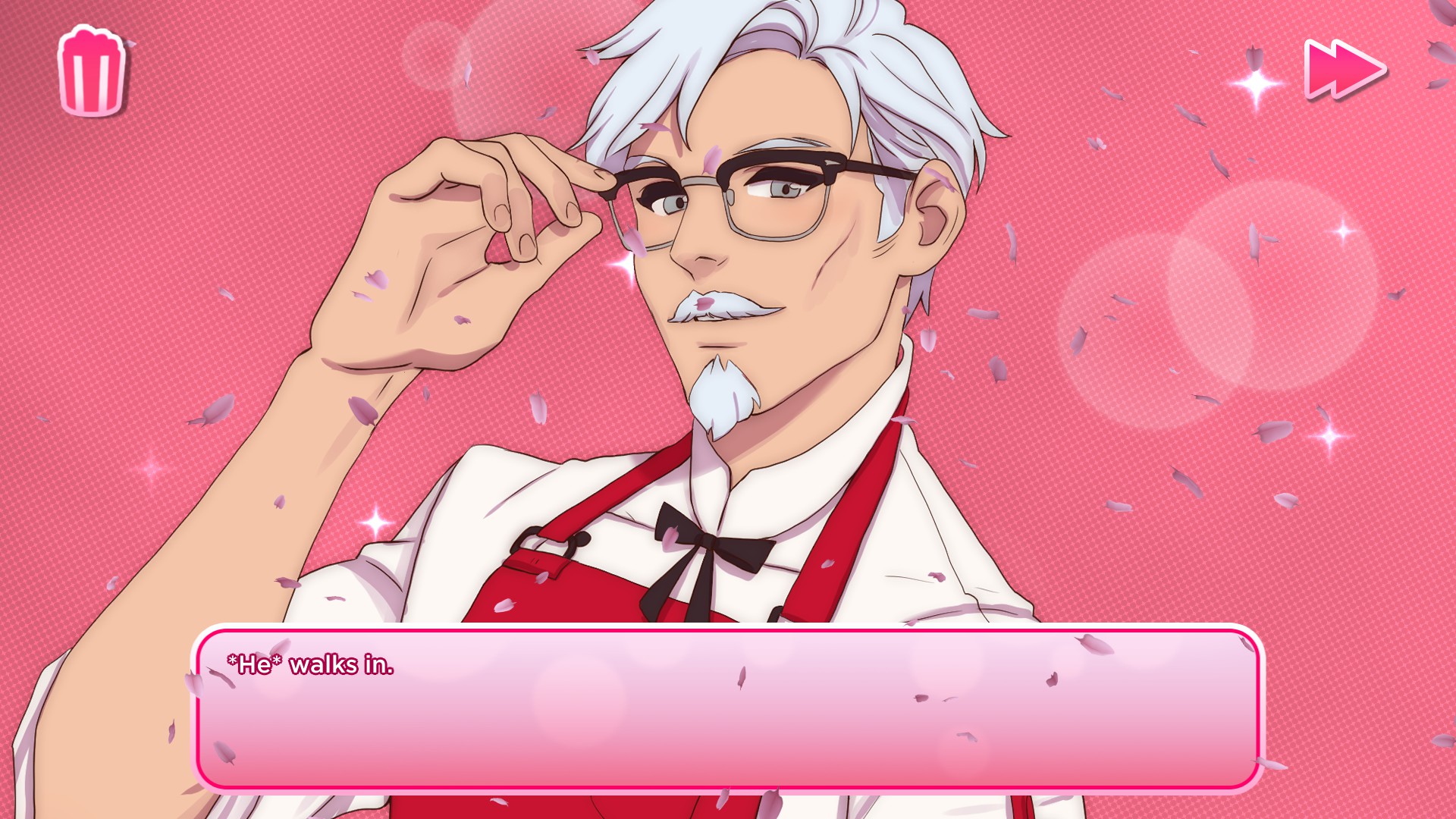 It’s tough to expect much from a game that only lasts between forty minutes and an hour and a half to complete. I Love You, Colonel Sanders is very much a surface level visual novel. It focuses on being zany rather than trying to make you actually feel for the protagonist and Colonel’s romance. There is also the question as to whether this is even a “dating simulator” as the title suggests. There is no stat raising for the protagonist and only a slight means of modifying the affection level of Colonel Sanders. Each ending is only minimally different and concludes the story abruptly.

Don’t expect anything fancy from the game. Visual novel fans in particular will likely be bothered by the lack of gameplay features. There is no auto text, ability to hide text window, text backlog view or even an option to save. Even the skip feature requires players to hold down the fast forward button manually. Such a lack of features is only forgivable because the whole game can be completed in one brief sitting. The lack of real depth to the cast also makes sense given the short playtime and focus on humor over anything else. 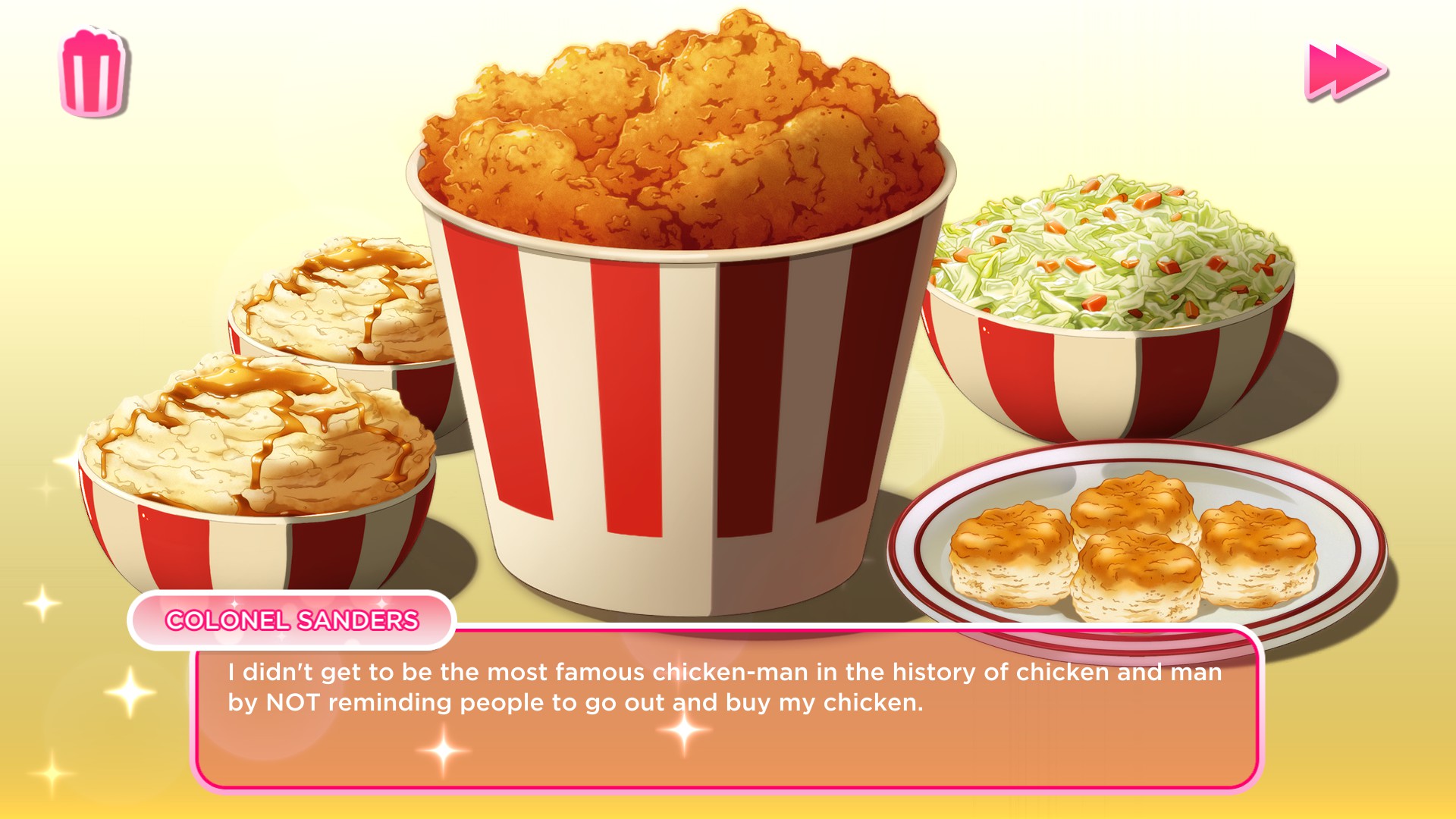 What could you really expect from a fast food advertisement in the form of a visual novel? For what it is, you’ll get about an hour of humorous — but not hilarious — story to experience. You may learn a little bit about KFC’s founder as well. But more than anything else, the game’s detailed artwork of KFC menu items may make you want to go to the fast food establishment. By that metric, the game is a success. But as a visual novel, you’d easily be able to play something much better than I Love You, Colonel Sanders for free or just a few dollars.