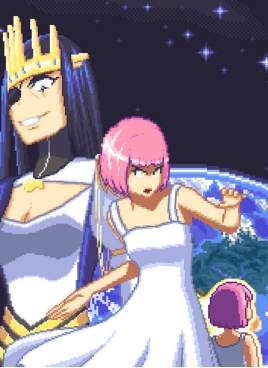 Infinite – Beyond the Mind

Infinite – Beyond the Mind first gained traction online a year before release with a short demo that showcased its fast-paced action. While there hasn’t been a shortage of retro-inspired 2D action-platformers over the last decade, there haven’t been many that left a lasting impression or felt like they would’ve been right at home as prime examples of how to do a particular kind of game design right. Infinite manages to outdo a lot of its contemporaries by taking established gaming tropes and putting a new spin on them in a small way.

Infinite gives you one of two characters to control, which really only changes the sprite art, but offers up some of the fastest action-platforming on the market. The core game is very much a blend of Ninja Gaiden-esque precision platforming with a Strider-like feel to the combat and a screen-to-screen approach to stages. It’s similar to a Mega Man game in that regard where each area offers up its own challenges and you have to pay careful attention to everything around you to avoid defeat.

Each screen poses its own dangers, but you have a variety of ways to defend yourself as the adventure goes on. You start off with a healthy mix of parkour platforming as you can dodge roll to not only make progress through a stage faster, but roll through enemy fire. A mid-air dash allows you to cross tough gaps and avoid enemy fire — but does so at the expense of your boost gauge, so you can’t just abuse it. You want to make sure to keep a keen eye on your character placement before using it too, as it can easily send you off an edge. 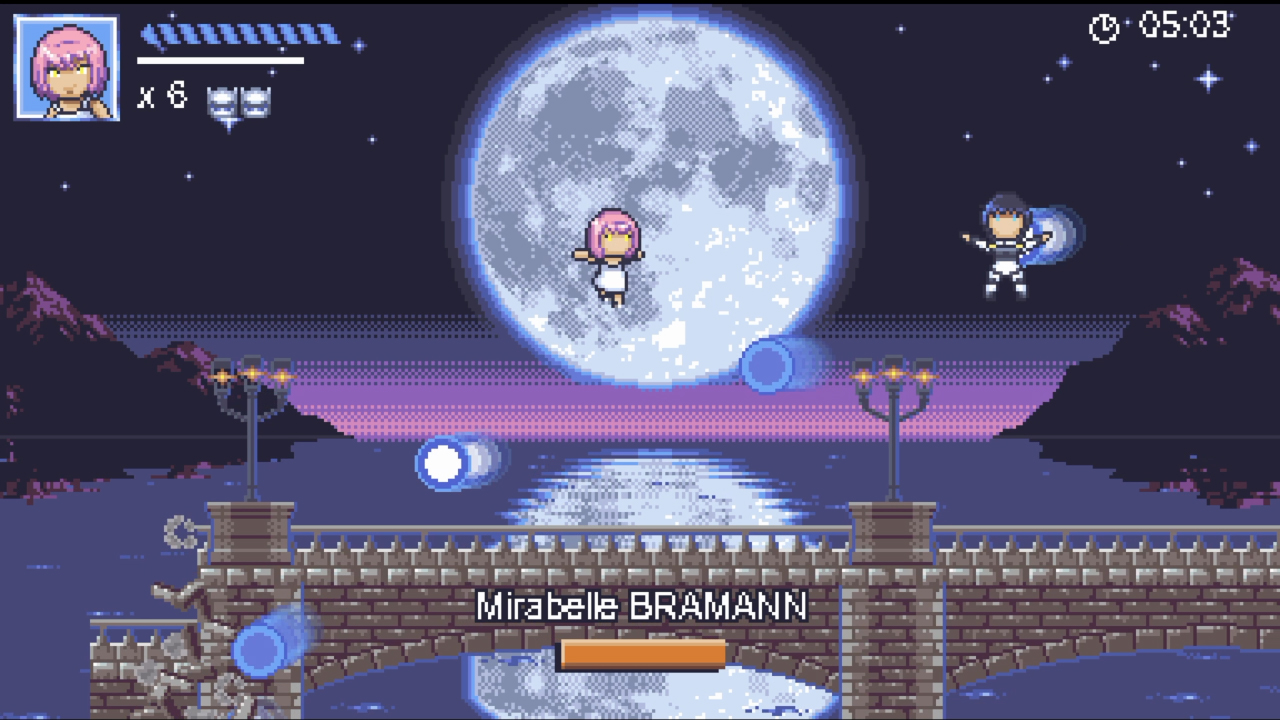 Sometimes, if you do this over a smaller ledge that has a wall near it, you can wall jump your way to safety — but you can’t count on that. Enemies come from all sides, even on the easiest difficulty level, and you have to balance the choice of taking them all out or picking and choosing. The former approach is riskier, but enables you to explore more of the stage and gather things like collectable tokens and health pickups. The latter are rarely found during the point A to B sections outside of right before a boss and the Sonic the Hedgehog-style multi-act structure for stages before a boss battle ensures that you have a good idea of when you need to stock up on health.

The short, but sweet level structure packs a lot into a small package.You’ll go from platforming-heavy sections to areas where you have to defeat hordes of enemies on opposite ends of the screen. Some enemies aim for you in the air, while others hide behind riot shields and some even lob grenades. As you progress, you’ll have to contend with enemies clad in items that make them blend in with their surroundings — but if you get used to paying close attention to your surroundings, they usually aren’t too much of an issue.

Boss battles are rewarding and generally make use of whatever skills that particular stage has tested you on. If you’ve battled in a lot of rooms with enemy hordes from multiple directions, then that skill is put to the test against two enemies shooting at you from several parts of the environment. Similarly, if you’ve had a lot of air dashing and a focus on platforming with tight maneuvering, expect to have to avoid a lot of shots on a minimal space later on. Infinite excels at side-scrolling action-platforming — but it’s a fine side-scrolling shooter as well. 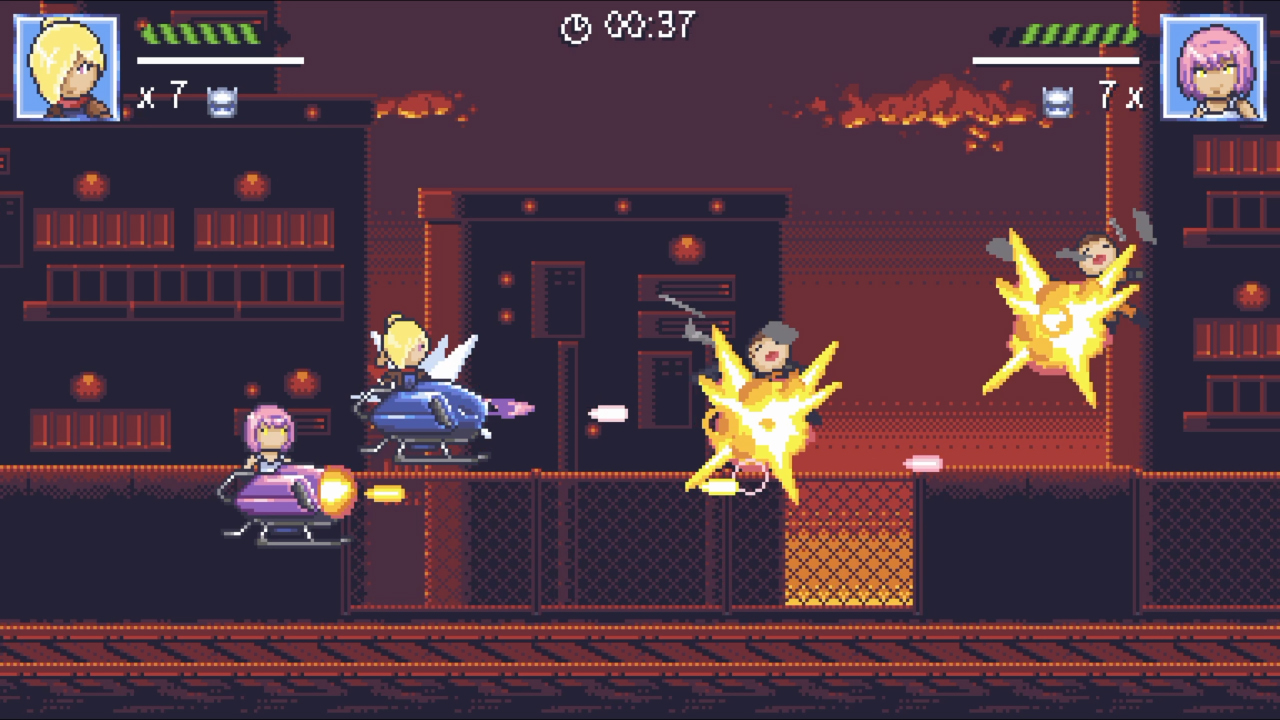 There are a handful of side-scrolling shoot-em-up stages mixed in and it’s a testament to how well-crafted the game is that they fit in seamlessly. Much like how 198X put a wide variety of genres in one game and did them well, Infinite does the same when it comes to platforming and shooting. Auto-fire is on by default, which helps minimize any fatigue while going from shooting to platforming and the stages are generous when it comes to not only avoiding bullet hell scenarios, but also having more health pickups than an average platforming stage.

Throughout the adventure, you gain some new skills like a charge shot that can cover the screen in the shooter levels and a mid-air slice off a double jump. Each of these has a risk/reward attached to it, with the former causing overheating with ease that leaves you vulnerable and the latter eating up your stamina gauge. Infinite manages to both have a set formula while still throwing in new ingredients to keep it fresh and interesting throughout the adventure, and while it may not be super long, it’s paced near-perfectly and tough to put down. 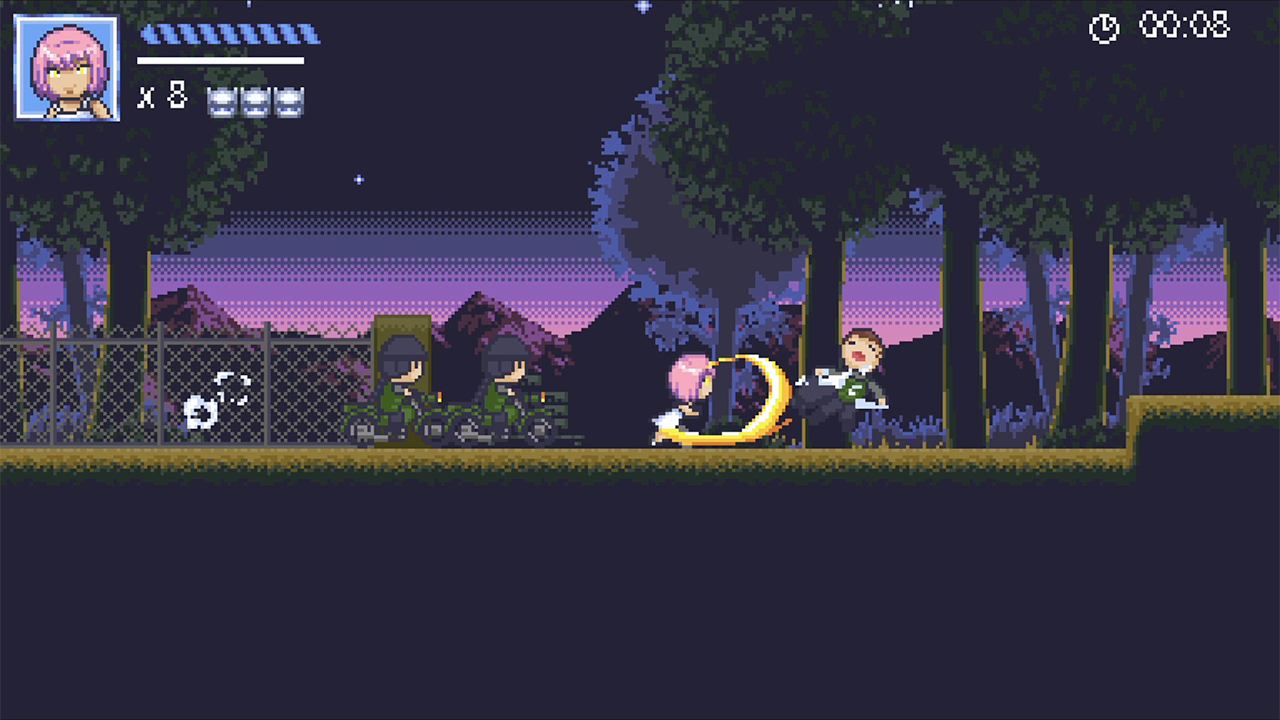 Visually, Infinite uses limited animation and in-game character designs to put a lot of the emphasis on the environments — which all look and feel different, with even act-to-act shifts having big color changes. This allows the world you’re in to stand out while the character design is minimalist, also showing how much you can do with very little as every playable character and boss manages to stand out thanks to broad color choices and it allows them to mean that much more after facing a slew of generic mooks.

Musically, Infinite has one of the finest chiptune soundtracks in modern gaming. It isn’t on par with Shovel Knight, but it isn’t far off and every stage ended with a song that I had stuck in my head for a bit and just had to hum a few bars of afterwards. Sword slashing sounds great, with a satisfying swoosh as it dices through countless foes while their firepower comes at you quickly, but each effect fits whatever kind of attack you have coming your way. Machine gun fire is different than a pistol, while rocket blasts have an oomph to them that makes sure you learn from audible cues to avoid them when you can hear them slightly before they happen. There was clearly a lot of work put into the sound design and it pays off in spades when you get to tougher stages and have more things thrown your way. 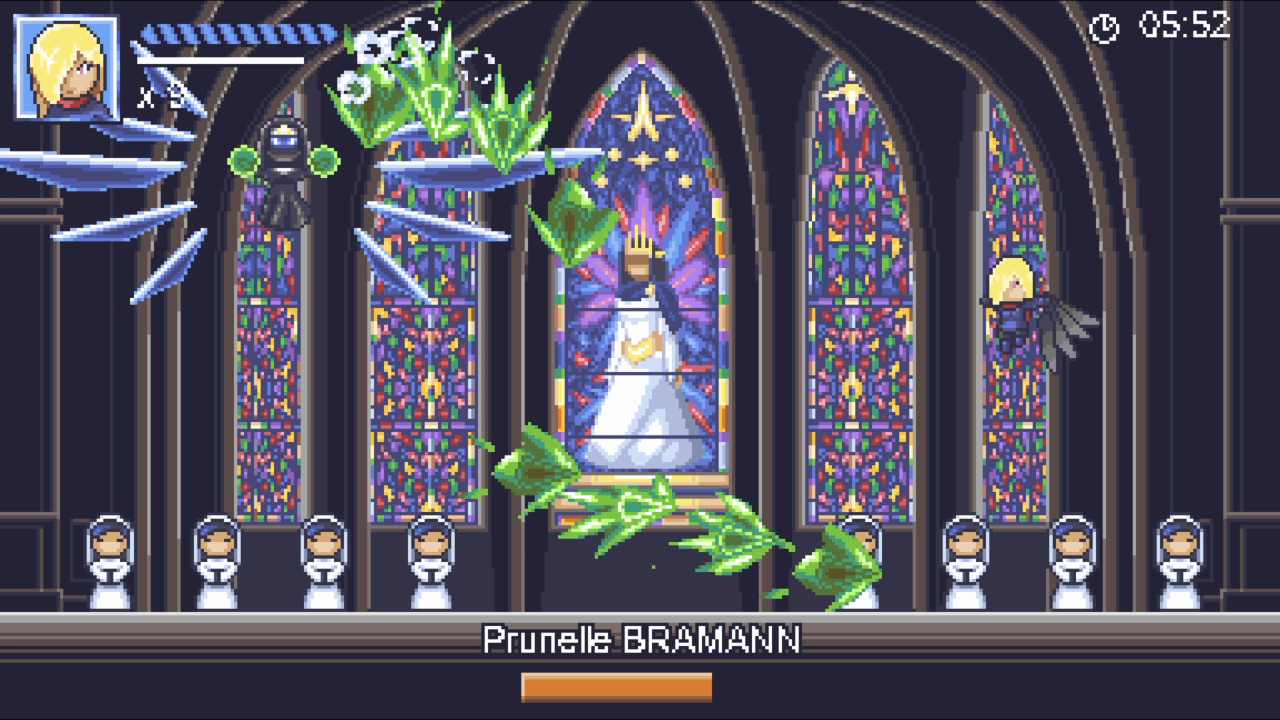 Infinite – Beyond the Mind is a finely-crafted game that blends several genres together. It’s reminiscent of Sigma Star Saga from many years ago with its seemingly odd merger of two genres together which winds up creating something that’s not only a great representation of one genre, but two. It’s a smooth-playing action-platformer that also manages to be an enjoyable side-scrolling shoot-em-up with a bite-sized level structure that ensures players are never bored. Those craving a fast-paced game that keeps them engaged from beginning to end should give Infinite – Beyond the Mind a shot.