Learning isn’t fun. There’s no two ways about it — it’s not something most people do leisurely — but whether you need to brush up on your Spanish to decipher details on a discount dentist’s billboard, or you’re simply in the mood to witness one of Japan’s many subway molestation’s firsthand, there’s always ample reason to add another language to your skill set. The problem is, learning a new language isn’t easy. In my experience, which I admit is rather limited, nouns, verbs and adjectives tend to meld together after a sliver of chapters, forming into a giant ink blot that, according to my most recent — and completely fabricated — psychological survey, looks a lot like something I wouldn’t be capable of conquering without some sort of direction.

It doesn’t have to be so hard, though. At least not according to Influent, the latest in language learning technology from creator Rob Howland, the Lee-proclaimed  “language extraordinaire” of gaming. Influent is, by all accounts, a learning system. Indeed, it presents itself in game form, with all the trimmings of your typical first-person, exploration based puzzler, only instead of gears to spin and levers to pull, you’ll be memorizing words in an ever-expanding vocabulary list. But it’s that gaminess that makes Influent stand out; it’s where it separates itself from the pack, chiseling a place in any respectable study round.

You see, school isn’t always entertaining.  There’s a lot of reading, writing, remembering and, usually after ingesting enough coffee to cripple a Colombian farmer, test-taking. And that’s where Influent shines. Gone are the traditional methods of memorizing text; reading over material for countless nights, slowly developing an adderall dependency. Where study helps build a foundation, Influent acts as a supplementary learning tool that — through a quirky storyline involving a crazy invention and its resulting lawsuit, open exploration of a 3D apartment, and some colorfully vibrant visuals — teaches you a basic vocabulary in the language of your choice. Most importantly, though, Influent is fun. And that’s something that can’t be said about most educational programs. 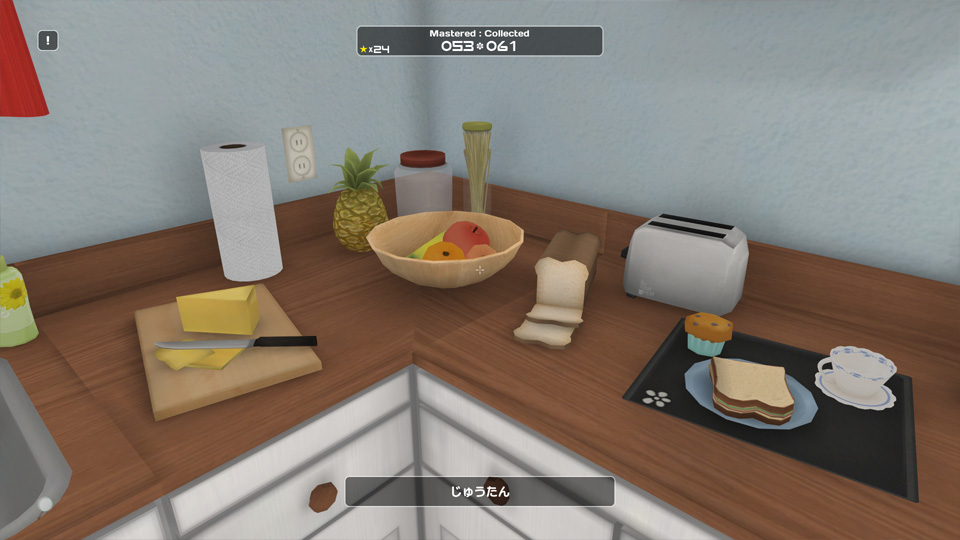 Now, you’re probably wondering if Influent is right for you. Good question. First, I’ll explain what Influent won’t do for you, because that’s where most of its value as a product is best represented. For instance, Influent isn’t going to help you master any sort of fluency. For that matter, it mostly ignores things like grammar, and doesn’t focus much on the finer points of each respective language in its roster. The intention of the game, and thus the end result of your playing through its story, isn’t to teach sentence structure, or improve whatever conversational jabber you’re struggling with. Rather, Influent sharpens an existing — or budding — skill, by forcing the memorization of a chunk of vocabulary (420 words total), and teaching proper pronunciation of said words. It’s best described — by me — as an exercise tool, well suited to help those with a developing interest in any of the available languages.

In terms of gameplay, you’ll explore an apartment littered with interactive items, both concealed in drawers, cabinets, etc., and at surface level. Your primary goal is to click on the objects to reveal a text bubble, each offering information such as spelling, pronunciation and, in some cases as with Japanese, various forms of orthography. While in its exploration alone Influent can easily improve on rough-but-established vocabularies, it’s the approach it takes that’s most impressive.

Learning to associate words with their respective object doesn’t feel like a chore in Influent, stripping much of the negative stigma revolving language studies. Once you locate an object of interest, you click on it, learn its definition/proper pronunciation, and add it to your vocabulary list. After enough words have been gathered (10), you’ll be tested on your knowledge — or more accurately, memory — of the assorted words. While in that regard, memory (rather than skill) plays a strong role in successfully conquering Influent, it also does a fine job of forcing you to dig deep into your brain for an answer you’ve recently learned — and in some cases would have forgotten. It ultimately boils down to Influent’s visual edge, however, as absorbing information is made all the easier when walls of text are replaced with exploring a 3D environment. 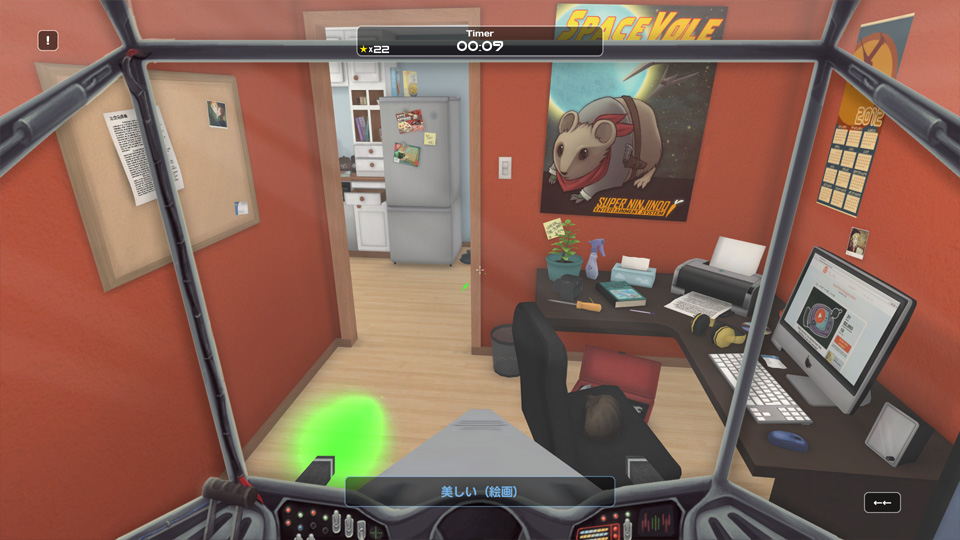 While the system itself is fairly simple, your bout of word masterly will eventually unlock a remote control airplane of sorts. This mode, which allows for a swifter exploration of the apartment, offers a nifty alternative to clicking things: shooting them. The controls can be somewhat finicky, but they don’t take long to get used to, and in the end it’s a nice addition to an already engaging practice. It does make for a satisfying method in which to study words, that’s for sure.

Most surprising, though, is the humor. I didn’t expect a game with such a strong emphasis on education to make me laugh, especially not as often as it did. With references galore, including nods to classic video games and obscure pop culture, running through the apartment on a word hunt is a breeze, and you’ll rarely feel the pressure of study in the process, instead learning at a natural and comfortable pace. There’s something amusing around every corner, and that’s what really encouraged me to brush through the environment with a fine tooth comb — something I’m quite glad I did.

Before jumping into Influent, I knew it wasn’t going to be a typical review. The game’s fun, sure, but it also has an underlying purpose that needed evaluation. Does it actually improve your vocabulary in the chosen language? Does the information stick outside of the game? The answer to both is a resounding yes. I was quite surprised at how quickly I picked up on around 75 words, gaining the ability to reference them as I walked about my own apartment. I found that Influent worked a lot like a series of virtual flash-cards, quickly reminding me of the learned words as I scoped my room for their real-world equivalent. Likewise, the pronunciation of words I thought I knew was corrected, as the game’s audio is loud, clear and easy to understand. 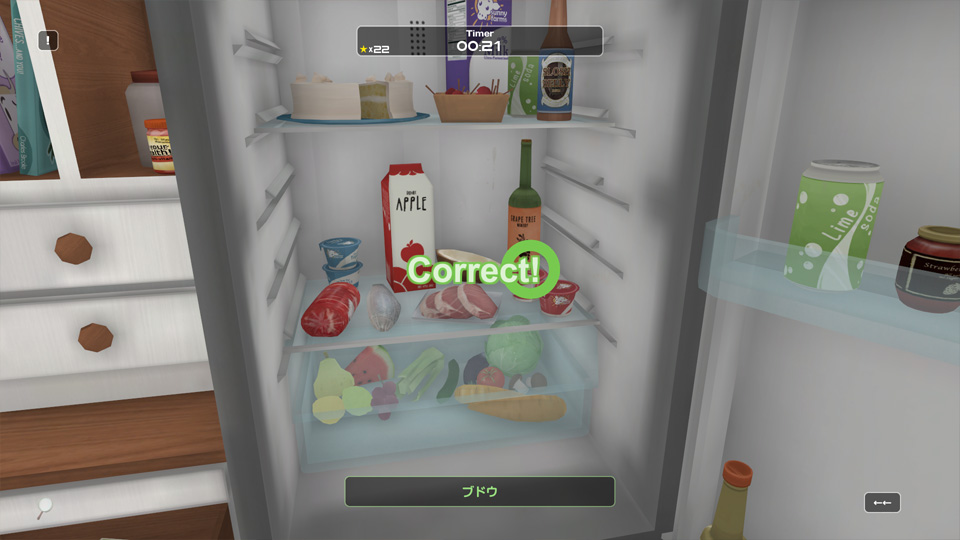 Its best feature, outside of any obvious educational benefits, is that Influent feels very much like a video game. Where most programs would have you sift through walls of text, painfully memorizing bits and pieces at a time, Influent has you explore, on your own terms, a game space chock-full of interactive study points. Indeed, it’s not the end-all educational tool, but you’ll walk away satisfied with your accomplishments and, in terms of vocabulary, more prepared to cross further barriers in your language of choice. For a starting price of $10, and with each additional language set costing a mere $5, there’s no reason not to jump aboard, if only to tinker with its innovative approach to study. I hope to see Influent grow beyond its current state and, perhaps in future updates, become gaming’s Rosetta Stone.