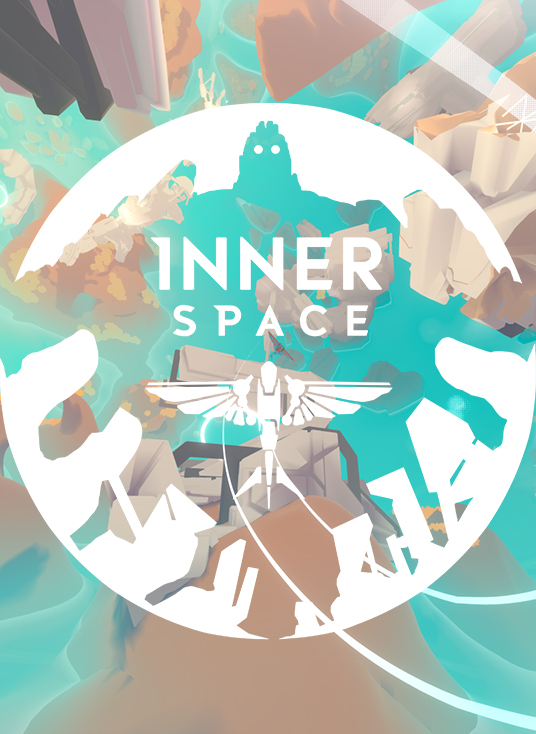 The end of the world doesn’t have to be an apocalypse.  Sometimes things simply wind down rather than break, leaving behind the dilapidated remnants of better days.  The Inverse is a world that’s over, pretty but completely worn out, and the only one left is the Archaeologist cataloguing its legends and artifacts before they fade away forever.  It’s a lonely existence, sure, but it beats doing nothing and there’s a lot of lost history to uncover.  One day the Archaeologist discovers a rare relic, and after a bit of tinkering manages to fit it to an airframe and activate its AI.  The result is not only a companion to explore the Inverse with, but also hope that maybe, just maybe, together they might find a way out.

InnerSpace is an exploration game set inside an enclosed world, where instead of flying over the outside of a giant spherical planet you’re on the inside with the levels above, below, and all around.   There’s no combat and no enemies getting in the way, making for a lovely and peaceful flight through large open areas, tight tunnels, and even a bit of underwater exploration.  The plane transforms into a submarine, because really why wouldn’t it, so all of the Inverse is your playground.  Its ruins aren’t completely inactive, though, so there are devices to activate and even old sleeping gods to awaken.  The plane stores the energy of Wind that it picks up, using it to energize the world’s leftover machinery.

Each of InnerSpace‘s five levels has a handful of collectibles to chase after.  The glowing white spheres are Wind energy, used to power upgrades and the occasional piece of machinery.  Relics are rare items hidden away, some moreso than others, and finding them enables upgrades, new plane types, or a bit of world lore.  Tracking down everything eventually turns up a boss encounter, or at least a boss-like encounter, except instead of fighting the area’s giant beast you’re waking it up, energizing its nodes until it’s alive again.  These giant beasts are the demigods of Inverse, and actually quite friendly and helpful once active.  They hold the secrets of Inverse’s slow fade-out, and while they can’t reverse its decline they can help you on the quest to escape. 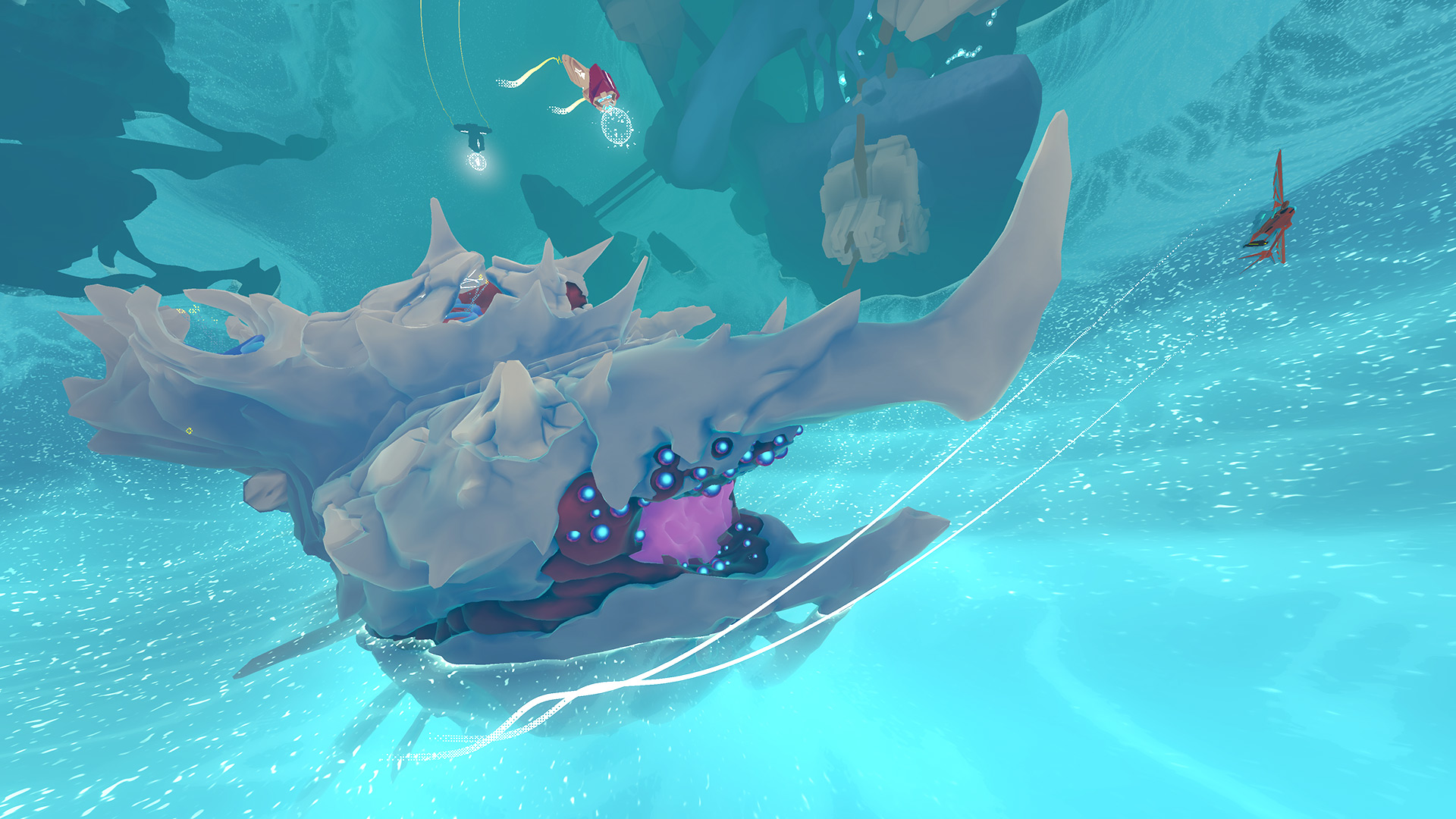 While there is a good amount of lore and history, they serve as a reason to explore rather than take center stage.  InnerSpace is about kicking back and flying through a strange alien world, chilling to the occasional bit of ambient music while figuring out how to get a relic you can see on the other side of a glass wall but can’t quite find the entrance to.  The plane is invulnerable, bouncing off walls without taking any damage, and while it can pinball around a bit in tight spaces it eventually pops out shaken but unscratched.  This is especially handy for bursting through fractured walls and windows, or ramming through cables holding up bits of scenery that cover passages to new areas.  InnerSpace is more about exploration than puzzling your way to a new area, though, so the breakable, bashable bits of scenery are always obvious.

The whole point of the game, in fact, is to poke around and see what you can turn up.  The flight model has a few tricks up its sleeve, such as a drift button that lets you look around while flying in one direction and gives a boost towards where you’re pointing when you let go, but for the most part it’s pretty simple and relaxing.  Fly, check out a cavern or bash into lever made obvious by the wind sweeping past it, see what happens.  The result is always going to be somewhere nice to fly through at the very least, and the only time it’s not incredibly pretty is when you’re in a tunnel between one impressive area and the next. 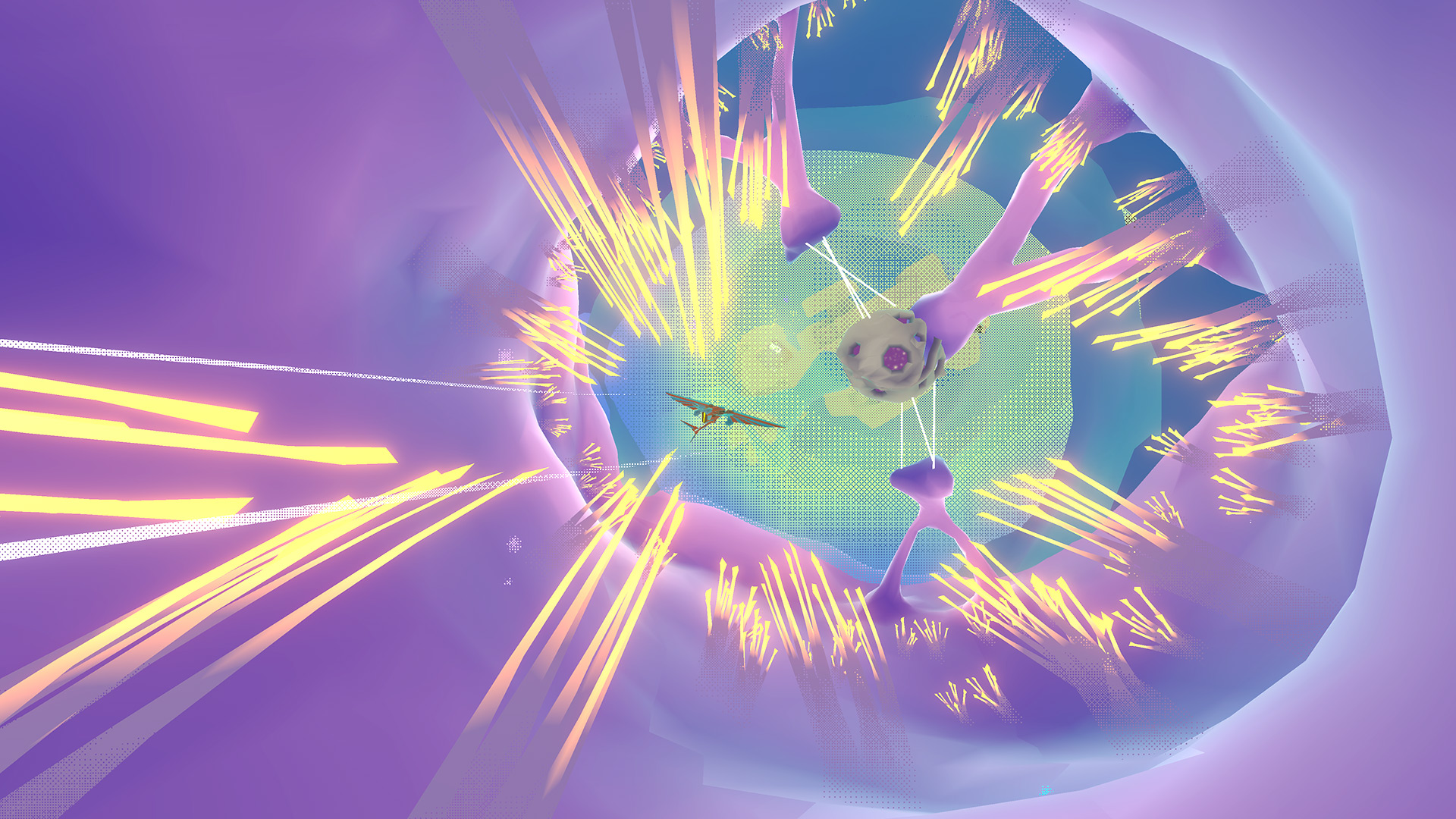 Mentally mapping out the areas can take a bit, thanks to the inverted-spherical areas, and a mapping feature for the twistier areas later on would have been nice, but a little attention to the surroundings and letting curiosity lead you onward means you’ll always be heading towards a new goal.  It’s very easy to kick back and soar through the inverted skies of InnerSpace, getting caught up in tracking down more Wind orbs or just doing a little casual barnstorming through the ruins, just for the fun of flight.

The smooth sailing of the core game is offset a little by a few technical problems along the way, though.  Small things, such as not being able to see what a relic does without opening it up in the menu, add a bit of inconvenience when you just want to check if you’ve earned its bonus yet.  My play-through also came up short on activating earned relics, one of which granted a new form for the plane, with the menu entry saying I could deliver it to the Architect now that I’d collected enough Wind except it had already been given.  This might have been fixed in the update that went live while writing this review, but it also wiped all saves so there’s no practical way to check.  Fortunately the standard plane is more than good enough to beat the game, and I found the trade-offs in speed and handling with the aircraft I did manage to unlock not really worth switching out from the base model. 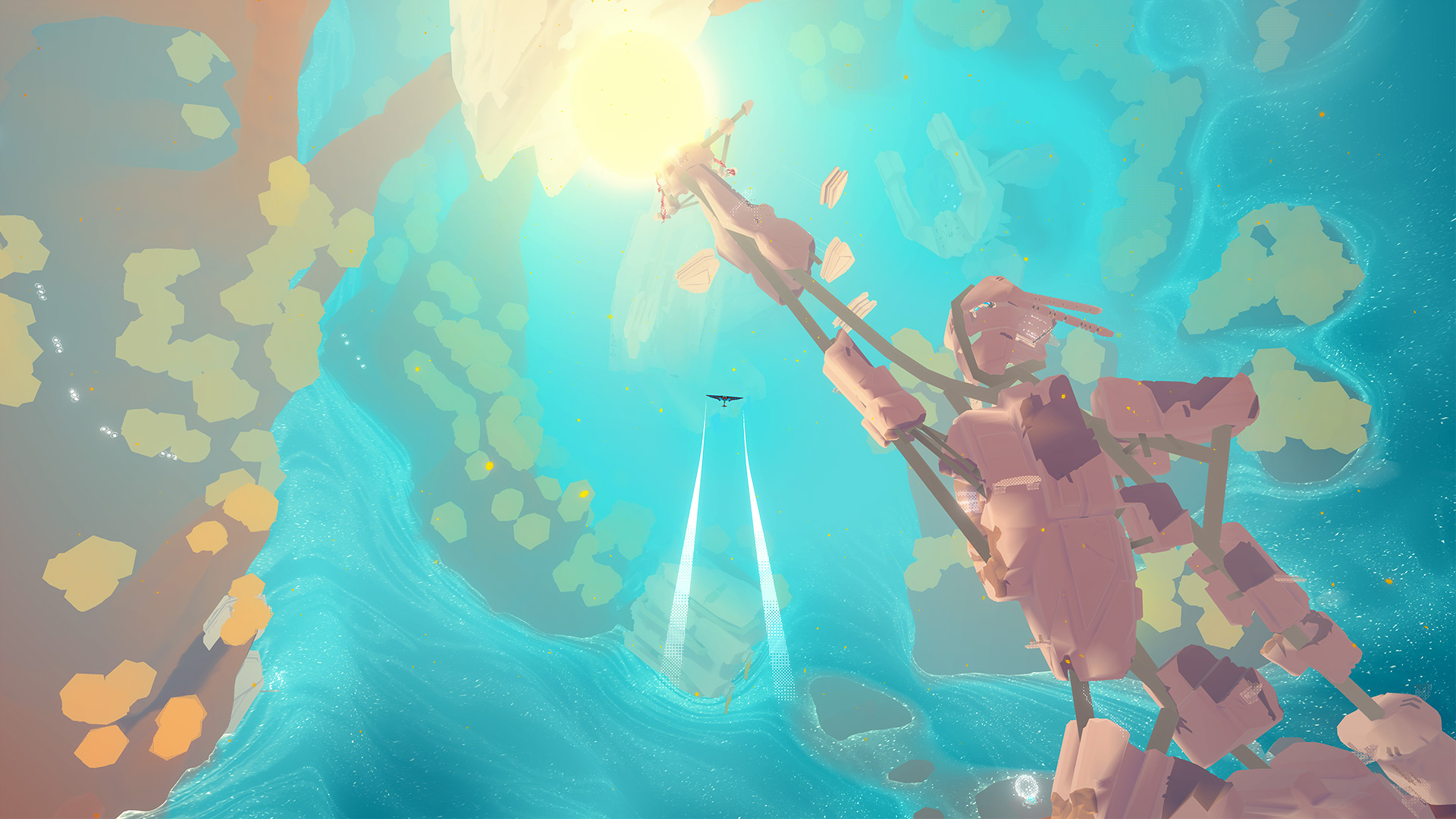 While InnerSpace struggles a bit on the technical side of things, the core game is a wonderful flight through worn-out but still beautiful sci-fi landscapes.  It always feels good to navigate the skies and mini-oceans of the Inverse’s enclosed worlds, and if it takes a bit of getting used to in terms of mentally mapping out how everything connects then at least it feels nice to re-fly through the tunnels as you piece the terrain together through a little repetition.  The Inverse is dying, yes, but it’s been dying for centuries now and it’s not like the place is going to explode any time soon.  There’s no reason not to enjoy the trip, activating old machinery and waking up the demigods that once powered the world during the quest to escape.  There’s a vast, endless universe outside the boundaries of InnerSpace, but there’s plenty of time for one final journey through the world while collecting its history along the way.