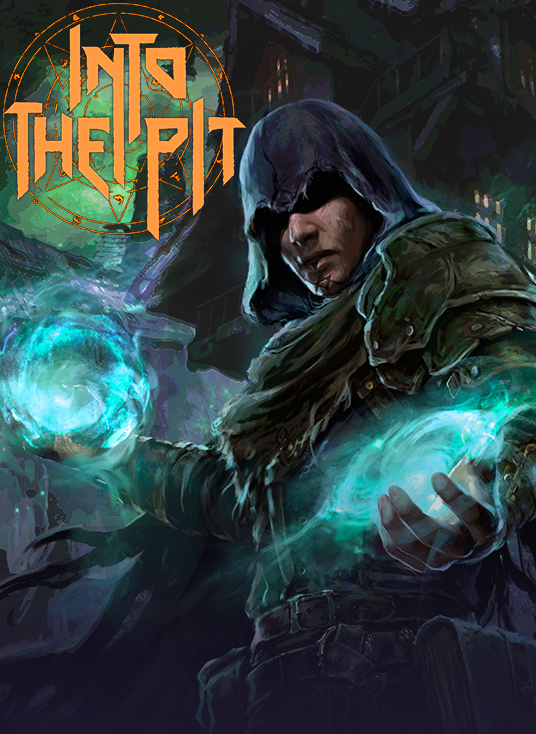 Guns are powerful, as are crossbows, swords and other stabby, pointy or shooty implements, but they’ve all got one thing in common: they’re tools.  Magic, on the other hand, is a skill, always available at the tip of a mage’s fingers and ready to fire off.  Sure, it takes decades of study and mental discipline to get to the point of having a wide arsenal of spells good for every occasion, but it’s worth it to have full access to unbridled cosmic force.  Ammo may run dry, but the underlying energies powering magical vitality are close enough to infinite as to make no difference, and only limited by the caster’s ability to channel them against the demonic forces of hell.

Following rumors of a demonic pit opening up in a small village, a spell caster shows up one rainy night to discover that there’s hardly anybody left.  The few townsfolk remaining are locked behind their doors, not willing to do much of anything until people start coming back from the pit the Alderman led them into.  The only one willing to help is the Ritual Keeper, who lives right near the entrance to the hole underneath the village, and all he can do is grant permission to enter into the depths.  It’s not much to work with, but as more villagers get rescued, the town’s resources slowly start opening up to make each new run down below maybe a little more surviveable.

Into the Pit is an action-roguelike FPS that’s heavy on the speed and firepower necessary to survive the monstrous creatures running rampant underneath the town.  At each run’s start you need to select one spell for each hand from a random selection of three, plus a non-firepower-oriented perk, and use what you’ve chosen to survive four floors and a boss encounter while powering up along the way.  There are a good variety of spells to choose from, such as a slow-moving but long-range explosive ball of magic, a short-range shotgun-style blast, a fast stream of bolts, mid-range scattershot and plenty of others.  At first it’s good to experiment to see what they all do before settling into an overall strategy, and I liked having a long-range attack on the left hand while the right was mid- or short-range attacks depending on what showed up as an option.  As for that final perk, it doesn’t take more than a run or two to realize the “chance to gain 1HP healing on enemy kill” is easily the most important of the lot for the early game, although speed, defense and various resistances are all options as well. 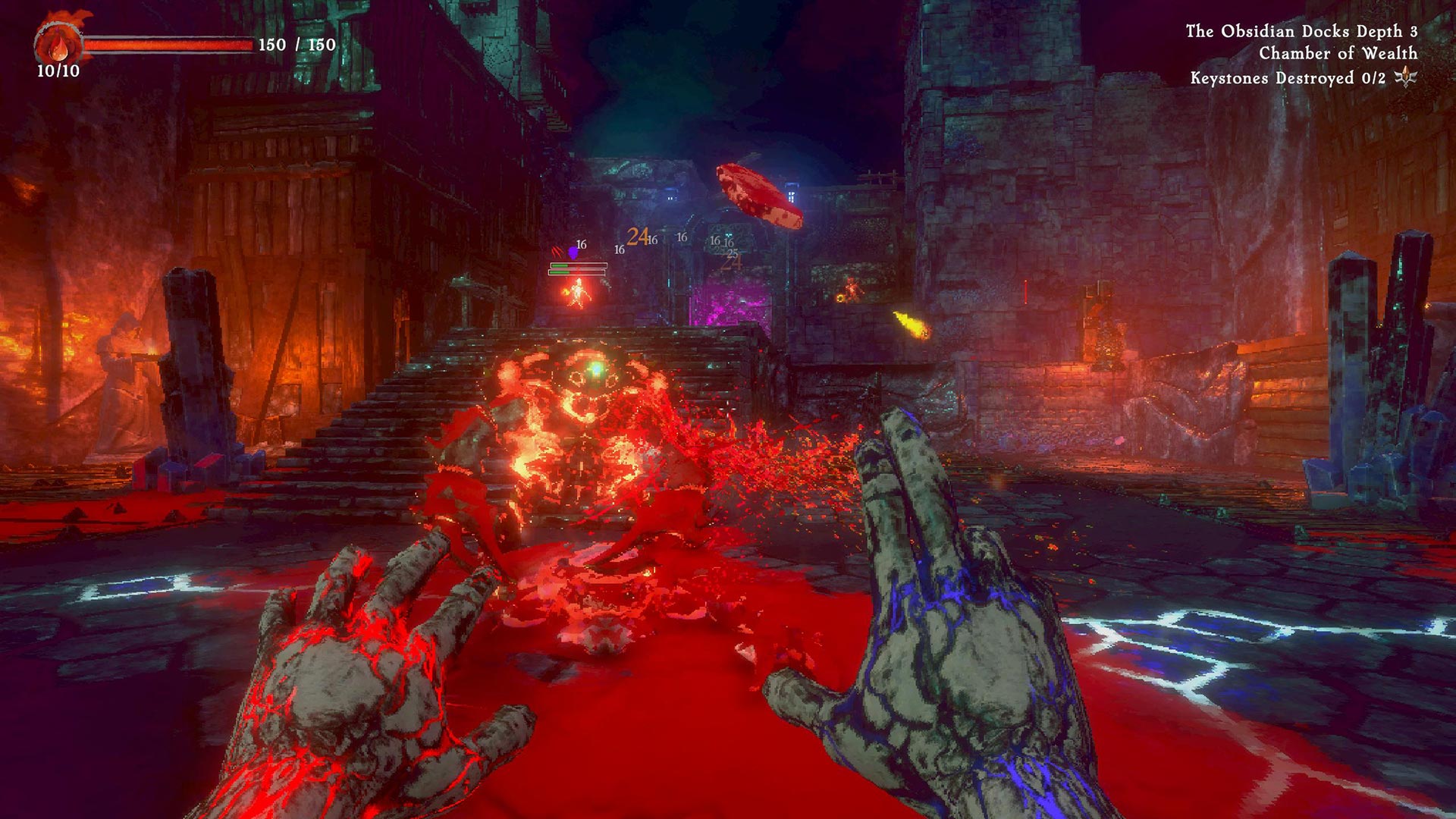 Once the selection is made it’s time to use it on the monsters, and Into the Pit‘s shooting action is fast, punchy and fluid.  It’s a lot of fun to tear through the early stages of a run, blasting through enemies while backpedaling, strafing and even getting good air-time if you can find a jump pad or a ledge to hop off.  Movement is set to auto-run and as is standard for this type of shooter the movement speed is by far the best defense.  The mage also has a decent jump, so it doesn’t take too long to start leaping from one platform to another while raining down fireballs on the monsters below.

Each floor of the pit is set up with four levels, and the levels are a random selection of hand-built arenas in a variety of styles.  Some are wide open, others have multiple levels of pathways, while others are more restricted corridors.  There’s also a choice to be made before heading into the level as to what kind of motes are inside.  Motes are basically a standard video game pickup, but each one does something different.  Gold, Fire and the rare Insight motes come back with you after the level is over to spend as currency in the village, while Renewal, Luck and Blood are used in the pit.

At the end of each level there’s a choice of three options to power up from, one for the right hand, left hand and support perk.  If you don’t like what’s there the Renewal motes lets you buy a redo, pulling in three new options, while Luck determines the odds of getting perks at level one, two or three for stronger results.  Adding the status ailment Bleed, for example, which makes enemies take damage when they move, is much more deadly at level three than one, but all perks top off at level five.  Finally, the last mote is Blood, which revives you on death with half a health bar provided you’ve collected enough of them. 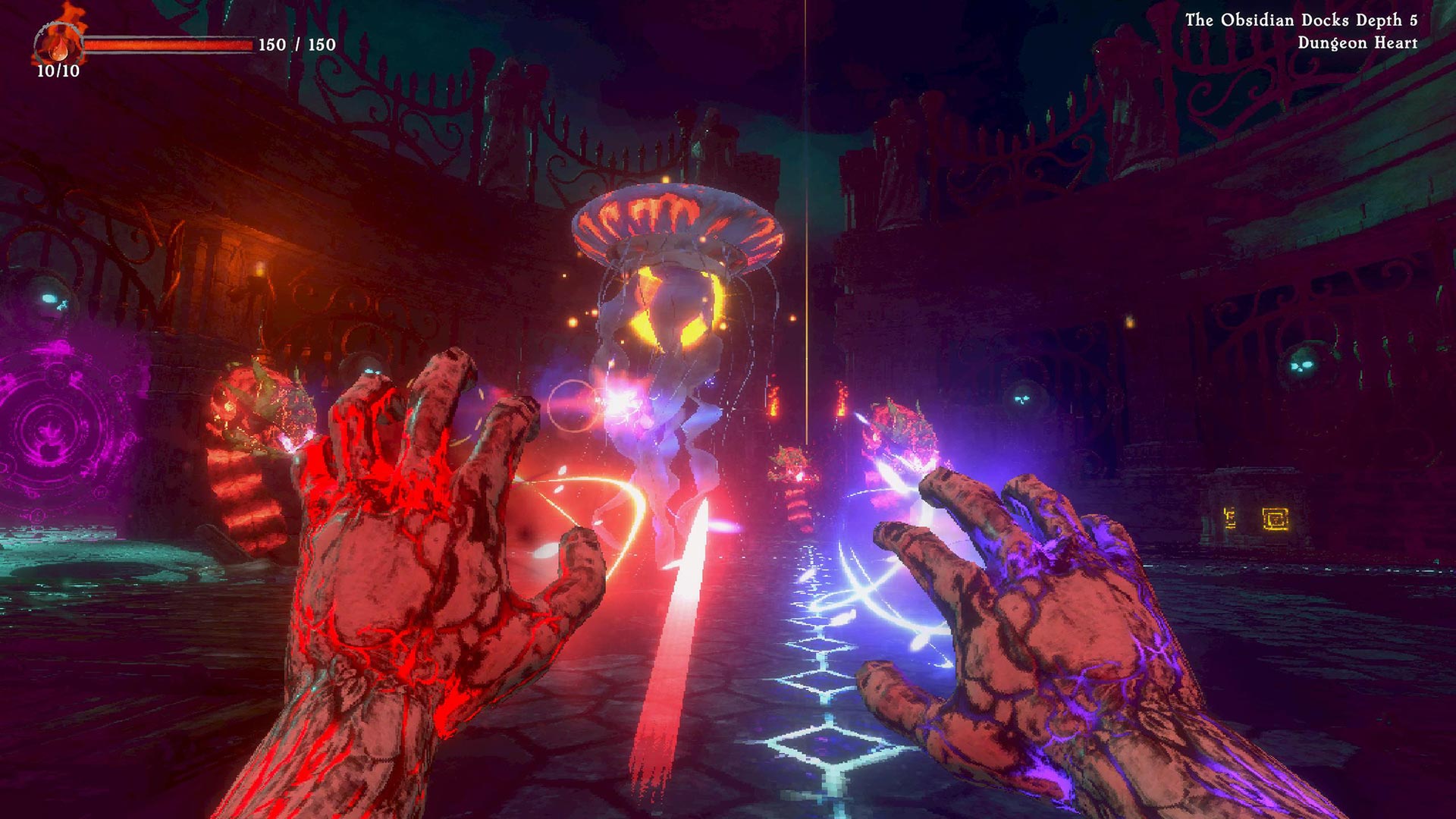 Each of the pit’s six biomes has its own set of arenas and menagerie of creatures, but only the Obsidian Fort is open at the beginning.  The villager with the key runes for the rest of the levels isn’t helping until three villagers have returned, and here’s where the start of the game gets troublesome.  Each area has three villagers to rescue, one on floors two, four and after the boss, and thankfully the Rune Carver will start selling his wares early, but his stock opens up as more people return and the useful options are locked behind having that third villager rescued.  Early on, healing is almost impossible to come by, and while no individual arena is particularly difficult, it takes sixteen levels and a boss fight for Into the Pit to start opening up.  It’s a war of attrition that makes the first area a slow, careful slog rather than the hyperactive action-fest the game turns into, because each hit is likely to make it that much harder to survive the boss on the bottom floor.  Once you’re good enough to survive the Obsidian Fort, the new healing abilities make the rest of the levels feel much easier.

The way abilities work is that villagers sell and enhance runes, and before each run starts you get to choose what to take along.  Initially the selection is four support and a key rune, but once that first area is finally cleared, the rune selection opens up to six plus two key slots.  Get a larger health bar, receive double motes at the cost of double damage, tweak the odds to get a favored style of post-level perk, and many more are all available, and it’s always fun to experiment with the loadout.  The key runes work differently in that once you’ve got two slots open you can mix and match biomes and enemy types.  Petrified Forest biome with Fungal Hollow monsters mixed in?  Sure, go to it!  For game progression it’s actually necessary to test each combination, because they’ve got three villagers apiece for a total of 45 in need of rescue.  Thankfully the status screen keeps track of which combinations you’ve done and how many villagers have been rescued in each, making it easy to know where to focus on next. 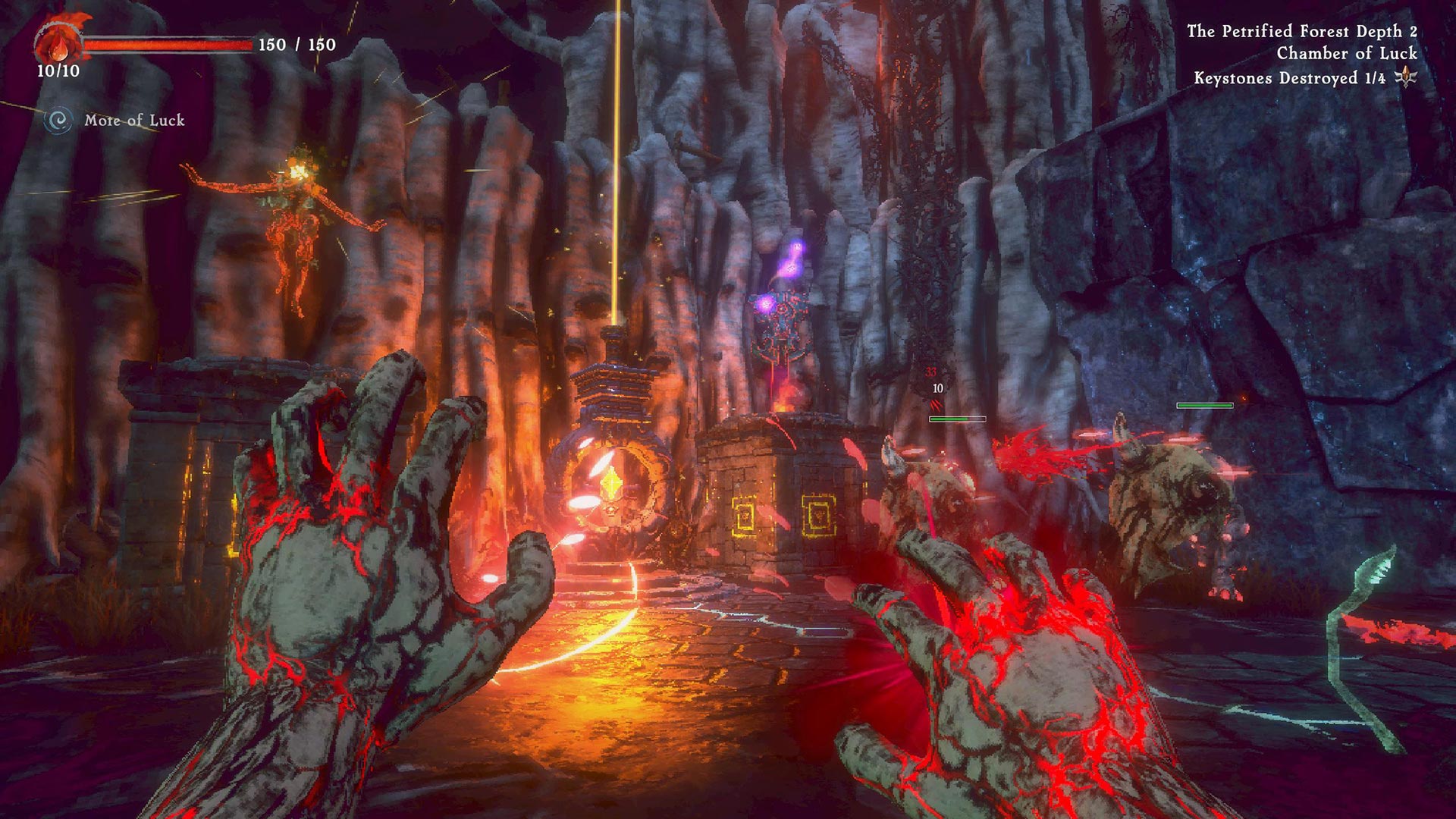 While the start of Into the Pit is unquestionably rocky, the follow-through is a blast, with fast action and serious pyrokinetics as monsters turn into blood splats decorating the walls.  While the overall theme could have been dark and gloomy, everything lights up and the darkness becomes the backdrop for the neon-magical lightshow to illuminate.  The variety of enemies and level types helps each run stay engaging, and while fifteen sets of levels plus the final area can feel like a bit much, there’s no need to try to blow through it all in a couple of days.  Into the Pit is about action, after all, with only just enough story to get things moving.  There’s a village in trouble and a ton of monsters to destroy by way of magical annihilation, and if it takes a bit to rescue everyone they’ll be fine waiting for a combat mage to do a run or two a day until the evil is finally dispelled.