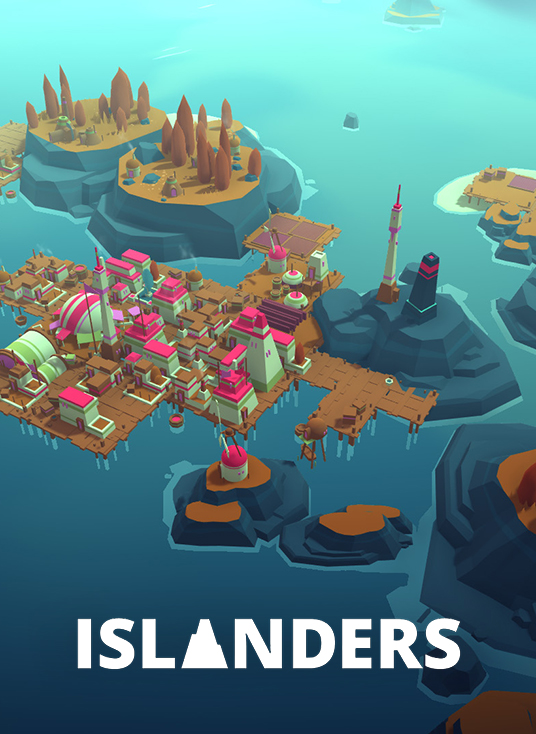 There’s a deep sense of satisfaction from building a little world but it’s easy to get lost in the details.  Worrying about tax rates, zoning, mass transit and all the other interconnected systems that make a city function can be a deep and rewarding challenge, but it’s also nice to plunk the blocks down wherever seems best until you’ve got a lovely little diorama.  Islanders is technically a city builder, in that you’ve got rules determining the most effective ways to set up a little town on an island, but it’s the kind of relaxed affair that’s more concerned with letting you create than getting lost in the details.

Each island starts off untouched by development, whether it be green fields, rocky mountains, large beaches, etc.  You get a choice between a couple of building packs, such as Farming or Lumber, and each comes with a number of buildings inside you can place anywhere you’d like.  On the surface there’s no resource management, but each building has the potential to give a nice score boost.  The Lumberjack, for example, gets a score bonus when trees are in its area of influence, but a penalty if another lumberjack is within range.  The Sawmill, on the other hand, gets its points from Lumberjacks, so if you’ve got a stand of trees on the island you can place a couple of lumberjacks around it and the sawmill between them, giving maximum score for each.

The score goes to a gauge on the bottom of the screen and filling it up earns the ability to draw a new pack of buildings.  At the start when you don’t have much going on the score to advance is fairly low, but as more buildings get added and the potential for combos goes up, the requirements to advance increase with it.  You’ll build little towns in multiple areas on the island, being careful that the Town Center buildings don’t overlap, then place fountains and parks to rake in the points, all the while being careful to avoid having buildings like the Mansion be too close to industrial areas like the Brickyard.  It helps that the area of effect for a house or mansion is fairly small, but islands only have limited room so after enough building the city can run right up against the working areas on the outskirts. 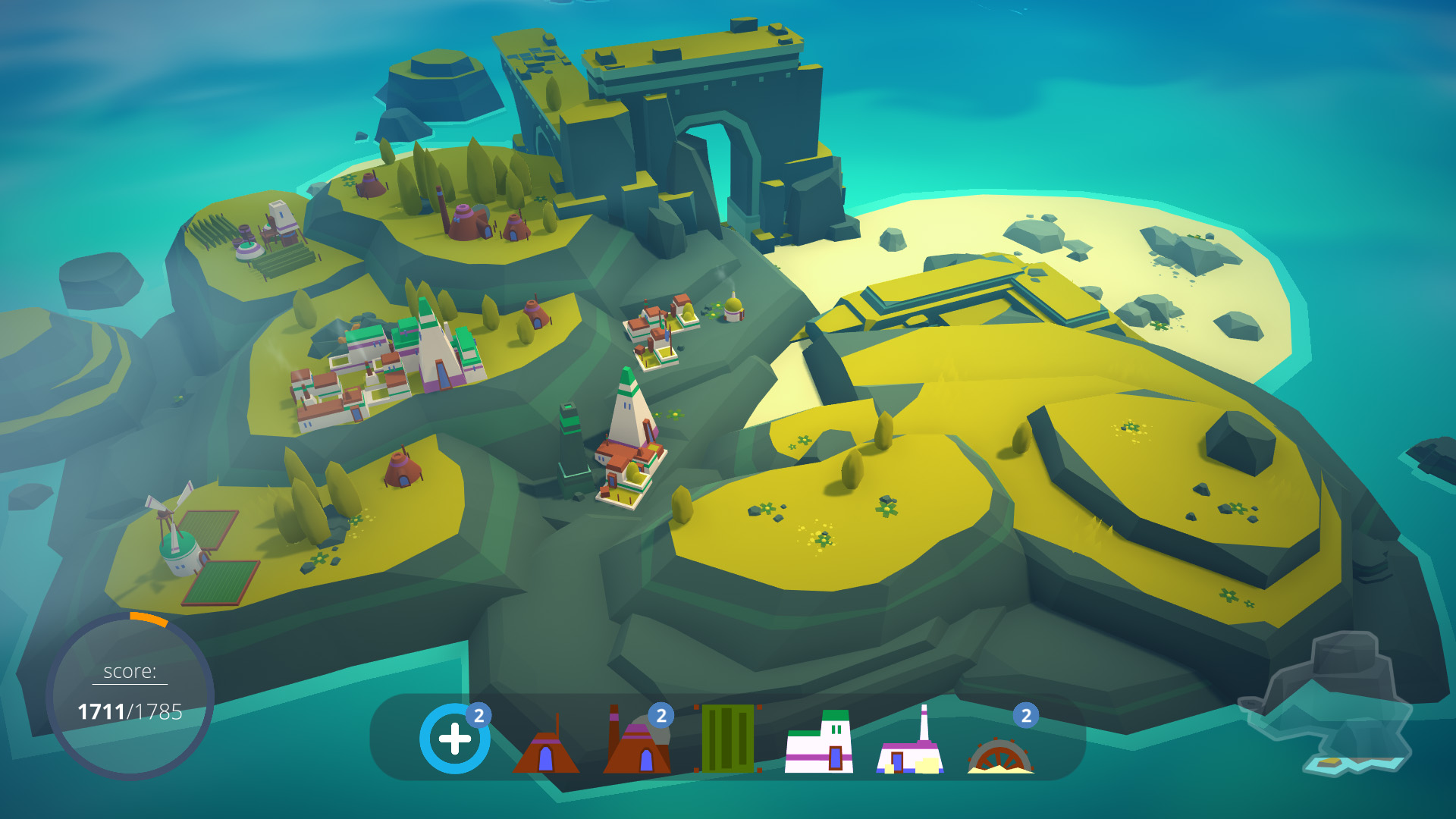 As you keep building, the island icon in the bottom-right of the screen slowly fills up, and once it’s full you can choose to either keep on going with the current island until you’re out of space or can no longer fill up the point gauge, or click the icon to start on a new island and bring your score with you.  On the one hand, as the island builds up you get more advanced buildings with greater scoring potential, but you can also discover if you didn’t plan from the start where the Gold Mine is supposed to go it’s easy to block off that avenue of development.  Islanders is very much like playing with building blocks, except for the bit where once a block is placed you can’t move it to make room for another.  Even though it initially seems like a relaxing toy, there’s very much a game running underneath the hood and it’s easy to build yourself into a corner if you’re not careful.

Still, the worst thing that happens if you find you’re out of moves is, instead of carrying the score along to a new island, you start from zero.  Same action, different point total.  If all you want to do is build until you can’t build any more that will keep you happy, but there’s also room to figure out maximum scoring potential in both building placement and the order of laying down the pieces.  Houses and mansions both give points when placed near each other but mansions only get a single point per nearby house while houses get two points per mansion, so when you’ve got both building types the mansions go down first with the houses second.  Of course, you don’t want to intermingle them too much because the Marketplace gets a mansion bonus and house penalty while the Circus is the other way around, but maybe you need those point bonuses from mixing houses and mansions earlier on to earn enough to get the next building pack.  In the meantime each new building takes up space and even the larger islands aren’t all that big, but maybe with careful planning you might just be able to get a massive scoring combo with an advanced building before needing to start fresh in a new land. 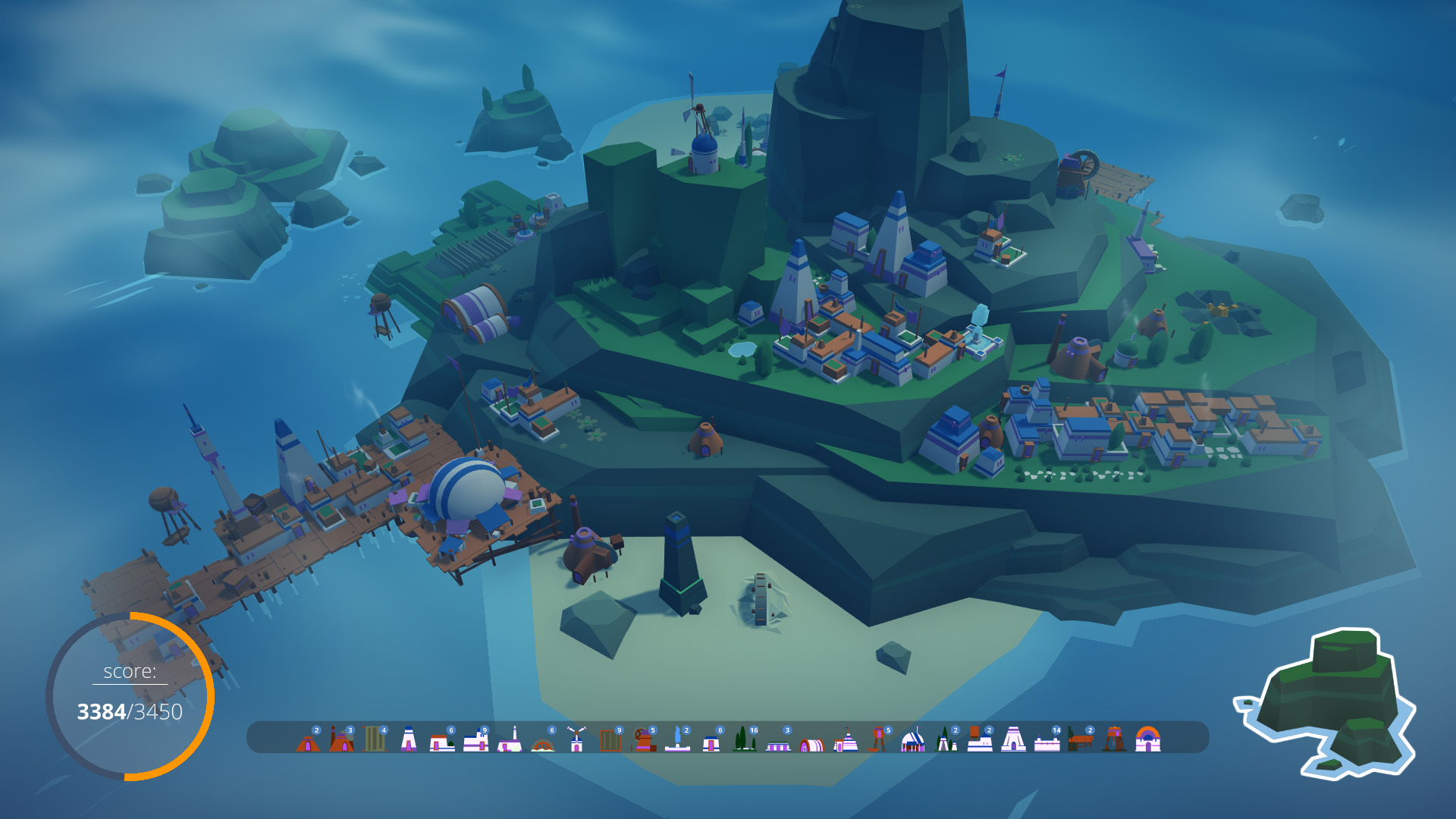 Islanders is a relaxing little builder more concerned with letting you get right to making the town than bogging you down with the details.  There’s a learning curve, of course, but it’s a gentle one that lets you pick up the details at your own speed without feeling like it’s a failure when you can no longer advance.  The next island is a chance for a new mini-civilization and the chance to build a little bigger than the previous attempt.  Even the rockiest outcropping of mini-plateaus has space to put down a building or two, and with a little careful management, it can be enough space to construct a town to be proud of.  And then the island is full with no more room to grow so it’s time to move on and do it again, lost in your own peaceful series of micro-worlds balancing building tactics with the chilled relaxation of low-pressure creation.