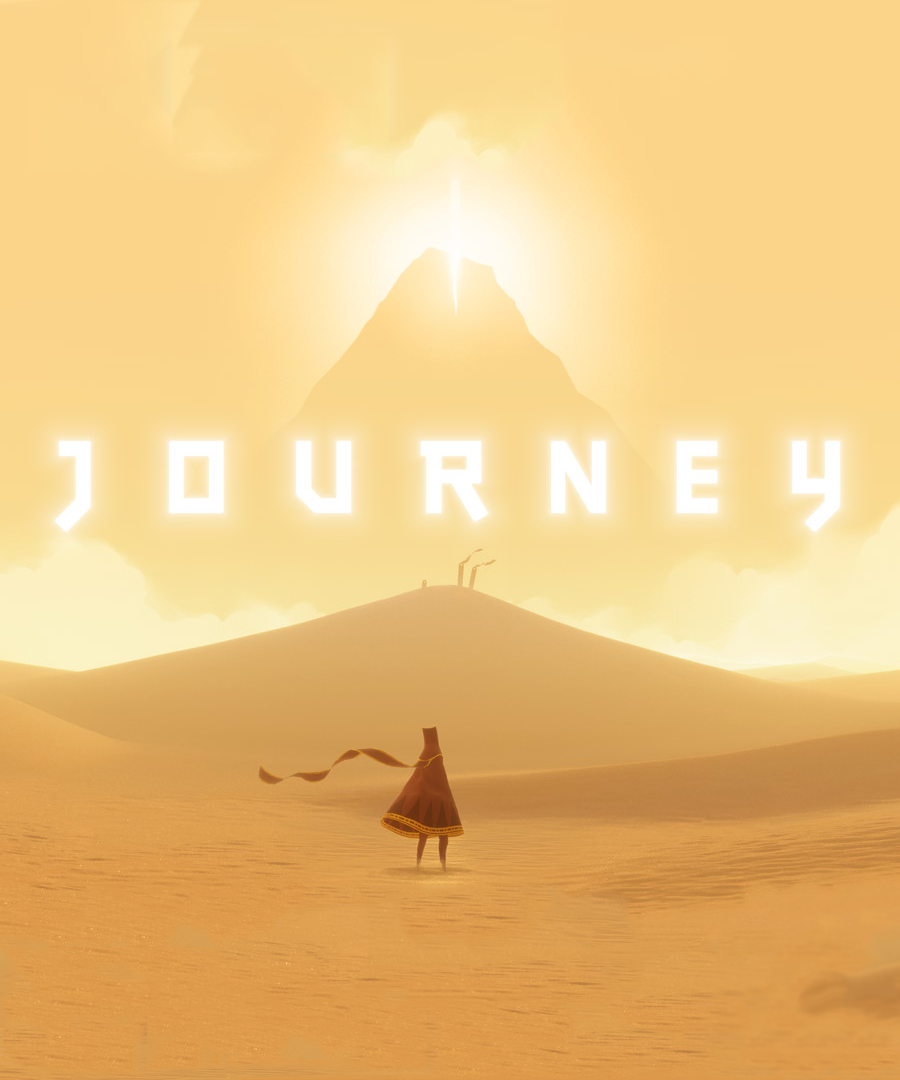 You know what’s strange? Loving a particular game more than almost every other form of media you’ve taken in, but feeling like you lack the words to do its description justice. Journey is one of the most special experiences in gaming to myself and countless other gamers, but whenever one tries to explain what makes it great, every word just seems ridiculous. For a while, it was hard to pinpoint exactly why this is the case, but after playing through the newly released PlayStation 4 edition of thatgamecompany’s masterpiece, the solution simply appeared.

Journey has the power to inspire thoughts and emotions that, while extremely strong, lack true definition.

Everyone is entitled to his or her opinions, but the idea that thatgamecompany’s Journey “isn’t a game” feels downright blasphemous. Journey is one of the most important video games of all time, as it kicked the argument that video games are indeed art into the forefront of everyone’s minds. On top of that, it’s the perfect game to show someone completely new to the medium, seeing that its true challenge comes not from its gameplay, but the way that it makes you feel. Journey is a humbling, breathtaking experience that finds a way to convey a different message every time you make a trek towards the mountain top. Perhaps it’s a story of the fragility of a new relationship. Maybe it’s a tale of accomplishing your true goal in life. Hell, maybe its narrative details the origins of life on whatever crazy planet it takes place on. Whatever the case may be, Journey is a modern classic and something that anyone who calls themselves a gamer deserves to dive into. Being that this is just a shift up to 1080p and 60 frames-per-second, the remastered version of Journey is definitely as simple as it gets, but those visual tweaks manage to make a stunning title even more sensational. 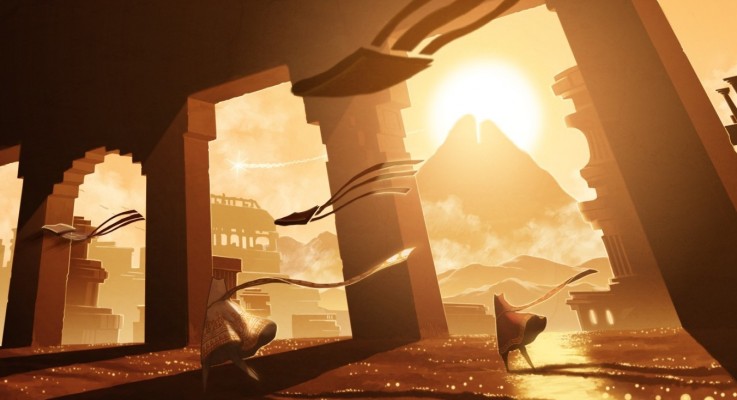 Anyone who has inhaled the air surrounding a conversation about Journey understands that the easiest way to describe it is beautiful. This is art design at its finest; every piece of the world feels alive and wondrous, begging for your character to explore it. As you make your trek up to the mysterious light-emanating mountain in the distance, it’s hard not to marvel at the sights and sounds around you. While some of you might feel like this review is chock full of hyperbole, one only has to walk around in the opening desert area and take in the surroundings for a few seconds before realizing that this is, quite frankly, the best looking game on the PlayStation 4. Every aspect of the environment feels purposeful, from the sand that dynamically reacts to your character’s movements to those breathtaking sunsets that manage to outdo AAA lighting effects.

Speaking of those sunsets, the middle section of the game is where the power of the PlayStation 4 makes its mark. For a game to physically drop one’s jaw during a repeat playthrough (yes, this totally happened) is something that doesn’t happen all that often, but this port absolutely has the power to do that. Because of the increased resolution, every glare on the sand during the iconic sliding sequence looks all the more staggering. Add this to the dynamism that results from gliding around this gorgeous realm at a smooth 60 frames-per-second, and you have the makings of a title packed to the brim with allure. 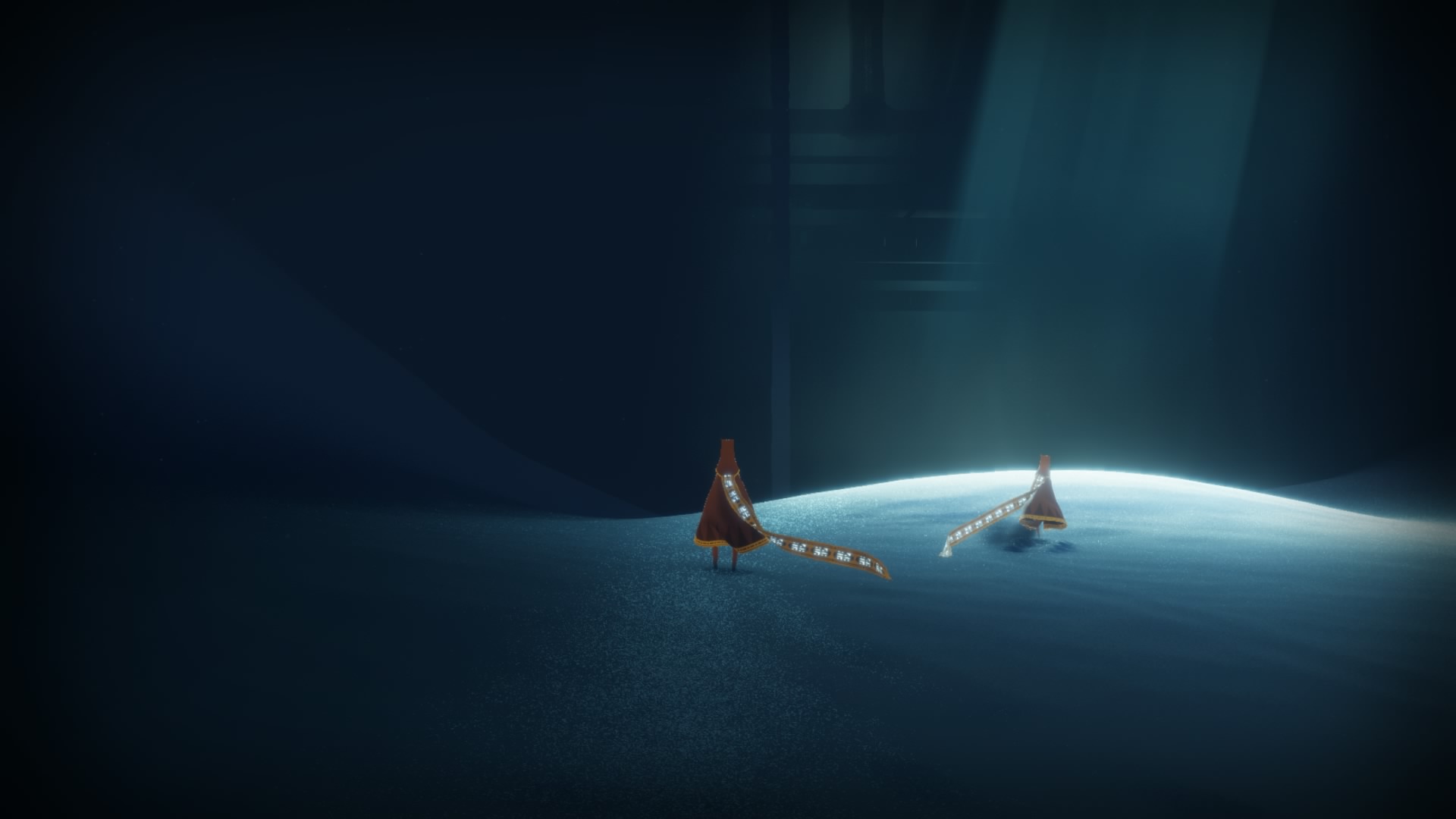 There have been early rumblings that the increased framerate does a disservice to Journey‘s cinematic nature, which borders on utter nonsense. The fact that one of the best looking games of all time is going to run better should be celebrated, as the increased framerate makes every movement feel more fluid and smooth. The thing is, if Journey was merely a visually beautiful game, it would be an interesting footnote in the history of the medium at best. Instead, thatgamecompany created one of the most powerful emotional experiences in gaming, and one that affects everyone differently at that.

The thing about penning a review of Journey is that its such a deeply personal two hours that it does readers a grave injustice to simply focus on the mechanics and narrative arc themselves. Let’s face it, this is a title with an extremely simple premise: you see a glowing mountain, you walk and float towards it and sometime unnamed players join you at random points along the way. Journey feels like the digital embodiment of the idea that a story is what you make of it. Sure, there are cutscenes here and there that help shape the world’s lore, but their ambiguous nature fits in with the overall emotional abstruseness of everything else. During this playthrough, I found myself endeared by the first player I met, only to grow tired of his or her companionship by the forty-five minute mark. After deciding that I’d take on the rest of the trek alone, I completely ignored this person whenever he or she appeared. Eventually I made it to the credits, where my companion’s PSN username would be revealed, something shocking happened: there wasn’t one person trying to befriend me, there were eight. In attempting to escape one person, I pushed away everyone who wanted to stay by my side. I was the monster.

Without turning this review into a personal diatribe, this playthrough perfectly mirrored past events in my life that I’m not particularly proud of. This is the exact reason why Journey is such a special game: every playthrough is different, and no other title has the potential to tell so many different stories. It’s the perfect reset button during a tumultuous time, or the perfect pallet cleanser when you think you’re sick of video games. Sitting back, wandering towards the mountain and letting your thoughts run wild is one of the most profound experiences you can find in gaming today, and now an entirely new segment of the population can experience this for the first time. 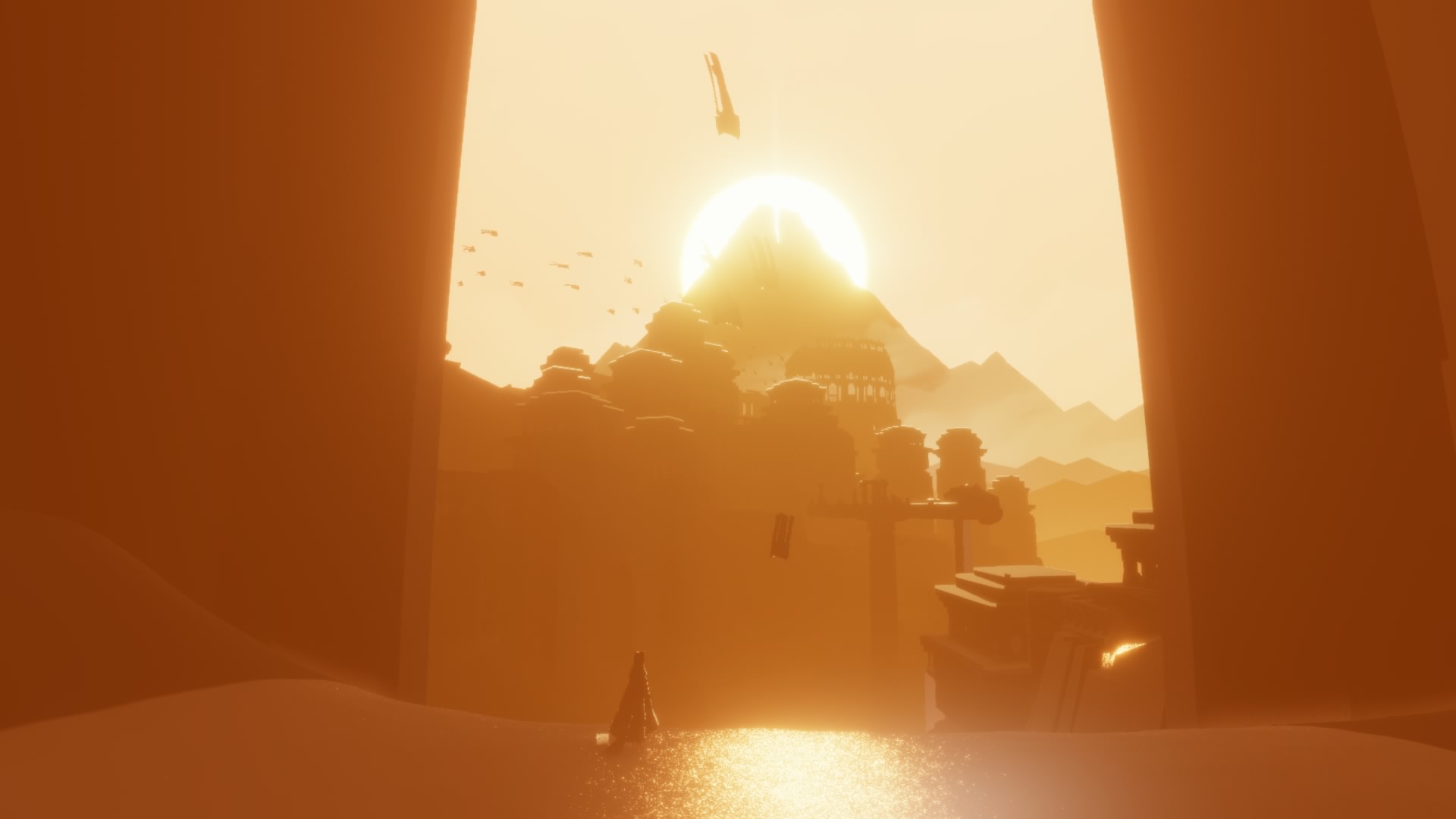 With the addition of Journey, the PlayStation 4 library has gotten a heck of a lot more special. If October’s Uncharted: The Nathan Drake Collection manages to avoid being a technical disaster, this will mean that Sony’s latest console will have five of the most incredible PlayStation 3 titles available for purchase if you include both this and The Last of Us Remastered. Out of all the shiny coats of paint last generation’s titles have received on PlayStation 4 and Xbox One, this is the title that demonstrates why visual upgrades can be important. Because Journey is a title whose art design weighs so heavily on the deeply emotional response it elicits from its players, making that art even stronger serves to underline its purpose. Those who haven’t taken the two-hour journey to the mountain top yet should stop what they’re doing and dive in. Journey really is that good.