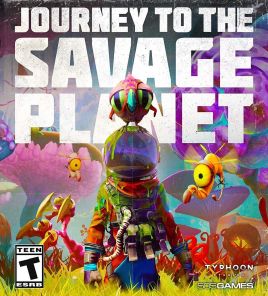 Journey to the Savage Planet

Publisher 505 Games has always been the company to give opportunities to developers to provide a more mainstream platform to showcase their ideas. In this case, Typhoon Studios has been working on a unique title that could be accepted as a blend of No Man’s Sky sprinkled with a little bit of Borderlands. Journey to the Savage Planet is the first game for the Canadian developer that consists of former employees of Electronic Arts, Ubisoft and WB Games Montreal. This game truly embraces an alien world as you will adjust logic to varying creatures as you do research of this planet as you try to get fuel and get off planet AR-Y 26. All of this sounds serious, but it’s the exact opposite. It’s a major part of what makes this game so special as Typhoon Studios’ first title is a memorable one.

Journey to the Savage Planet plays like a first-person shooter and a RPG, but it doesn’t fall in either boat. You play as the newest recruit for the Kindred Aerospace Corporation, which the game will constantly remind you that the company is rated the fourth best interstellar exploration company there is. As this Cartographer or explorer, you will explore four Biomes as you scan different types of life and learn how to adapt to this world. Different creatures will produce different traits and some can be misleading much like the dinosaur that killed Newman in the original Jurassic Park. There will be a “Ghost” robot much like Destiny has that will accompany you on your explorations. The voice of this robot showcases a sarcastic and cruel tone that embraces the light-heartedness of this title. The Javelin is where players can upgrade their skills or research weapons that will help advance quests. The game features one gun but there are sub-weapons that offer different effects such as causing a creature to get stuck or shocking them with electricity.

The light-heartedness is felt from the start. You will create your character and you need to choose from eight stock photos that look like glamour shots gone bad. The computer system and the ships design is something that was pulled straight from a 1980’s futuristic sci-fi movie. The more you play, you will receive commercials and advertisements for the most ridiculous things I have ever seen in a video game. These ads feel like they were pulled from a Tim & Eric Infomercial and it just adds to the overall humor of the game. It also helps seeing cute and innocent bird-like creatures that will charge you when aggravated. I honestly felt sorry for killing some of these animals as they don’t attack you unless provoked. However, all animals provide carbon and items that are needed to unlock and upgrade specific elements. It all just ties into an amazing experience that hasn’t been seen in a game before. 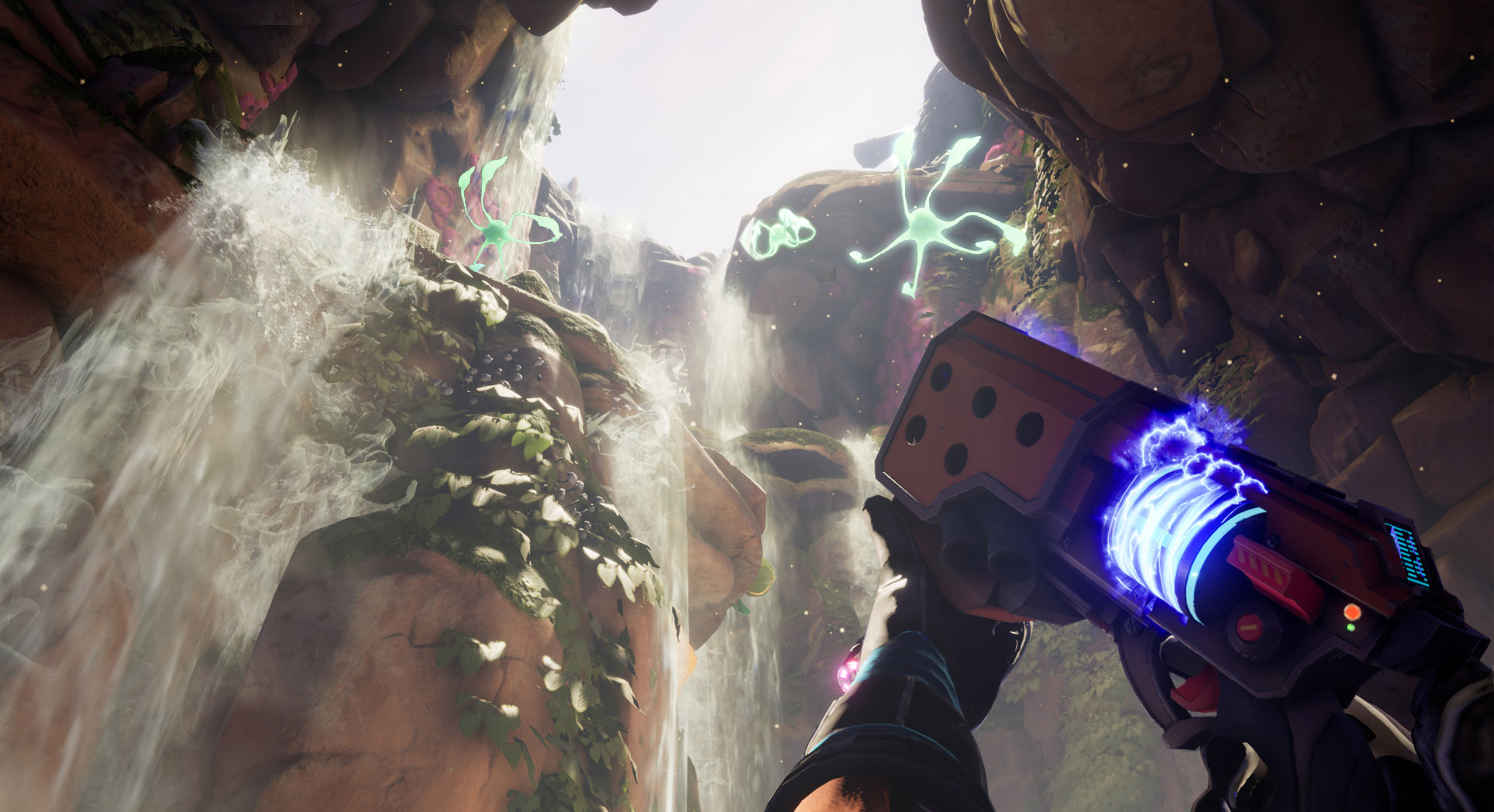 Journey to the Savage Planet runs on the Unreal Engine and focuses less on the technical details of realism but rather on a fantasy world for of color and originality. Everything from plant life and terrain are completely alien and the creatures range from cute little animals to mysterious life forms and menacing mid-bosses. Also, each Biome has a large and massive boss battle to advance to the next. The world looks beautiful, but textures up close are severely lacking. Playing this on PC, it easily ran in 4K at max with 60 FPS. This was using a GTX 1080ti an an older i7 processor. The only frame drops that I encountered was with heavy water effects such as a waterfall. There is clearly scaling for extended terrain in the game since the world loads with its creatures all at once. Looking off in the distance, you can see creatures move at what seems to be one frame per second. The worlds are immersive and giant as the game provides an excellent alien atmosphere for a planet that hasn’t been visited by humanity prior.

One aspect that’s appreciated in the game is the puzzle solving. Since this is an alien world, you can use the logic of solving puzzles but not knowing what does what makes it extremely challenging. Typhoon Studios made areas of the game difficult as there’s no helping hand. The game even lacks a map and while that’s annoying, it’s understandable to what Typhoon was wanting to accomplish. You have to get acclimated to each Biome by exploration. This can bring the grand total of the game to over thirty hours. You will also die a good bit. A lot of the traversing comes from trial-and-error but it is more on the line of learning rather than trying to punish you. Things will become easier when you unlock certain abilities. Being able to “Spider-man” your way through areas with a grappling hook is fun and makes the platforming element stand out.

The audio in the game is executed fairly well. Each Biome features ambient music that matches well with the level design. Voice acting is spot on, but you’ll only really hear the commercials and the voice of your robot. Each creature has specific sound effects to separate the species and they all fit perfectly. As great as an experience as Journey to the Savage Planet is when playing single player, Typhoon Studios has also added a cooperative mode. This option, however, is limited. There’s no lobby system or even matchmaking. This was something that Mechwarrior V implemented as it was touted as having it, but not executed well. Co-op is invite only and this is across each platform. The game is available on Xbox One and PS4, as well, and those require putting in someone’s account name to play. What makes it worse on PC is that this game is an Epic Store exclusive, so chances are players are more limited due to that exclusive. If you and a friend purchase the game and you want to play with that specific person, then it shouldn’t be an issue. Otherwise, you will be searching on the internet for forums to play with random people. 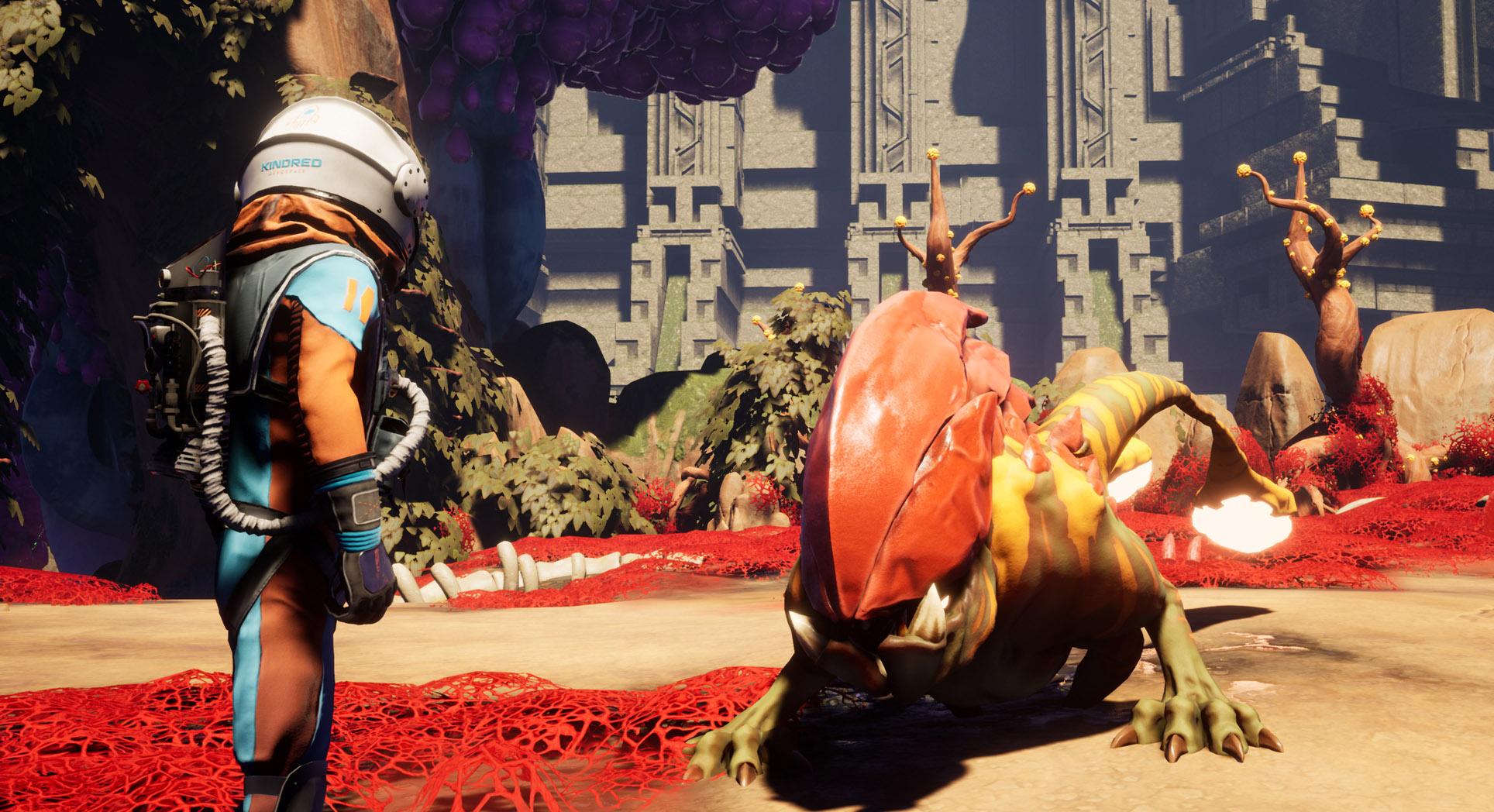 Typhoon Studios has created an indie title that will capture the attention of the masses. On the surface, Journey to the Savage Planet is an attractive title based on the sci-fi and exploration elements, but it’s the humor, gameplay elements and puzzle solving that pulls you in. You will be sucked into this game for hours before you know it and while you’re going to die a good bit, it won’t be due to punishment but rather learning what to do. Scanning and exploration are just a portion of the game but are a necessity to continue. The worlds are beautiful in the grand scheme of things, but focusing on textures and items up close will show some quality issues. The co-op option is truly just an option as it lacks matchmaking and lobbies, but Journey to the Savage Planet only retails for $29.99 and is no doubt worth every penny. There are plenty of full-priced games that do not offer the experience that this game does.