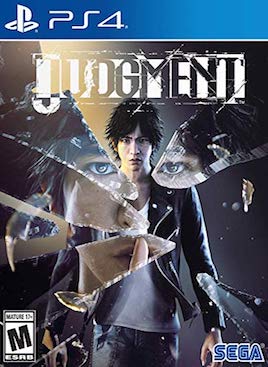 As mentioned by the game’s Director Kazuki Hosokawa-san when asked what developer Ryu Ga Gotoku would like players to take out from Judgment, the game’s focus on its story is undoubtedly its strongest element. There’s a stern argument to focus things on how similar the studio’s latest project is to their long-running behemoth Yakuza. Beyond just the fact that the game pits proceedings once more within the inner-city district of Kamurocho, and that — when it comes down to it — there’s a strong case for noting just how much here is reused and repackaged. Or in the case of the genuinely original concepts, recalibrated to suit the premise on show. For sure, Ryu Ga Gotoku have, in recent times, seldom shifted gears so dramatically for the sake of proving a point. Whether you’re against this design philosophy, or simply don’t care, the evidence is sufficient in that claim: Judgment — in many respects — looks, acts and plays very much like a Yakuza game. Not entirely to the point one can denote it Yakuza 6.5, but one whose major mechanics and plethora of content, though vast, shamelessly indulgent and [un]surprisingly entertaining, can feel a touch familiar.

Which in actuality, is no bad thing; where Judgment may slightly falter on its upfront visuals — and on occasion throw up some unwelcome performance hiccups and less-than-pleasant low-res textures for parts of the environment — it more than makes up for with, once again, just how wild and laughably bonkers the game allows itself to head towards. Scenes that start in empty rooms only to end with a dozen (or more) Yakuza types to beat up seldom fails to get a quick chuckle. In much the same way rooms full with furniture quickly get torn out to end on all-but-vacant spaces. Even if the tone here takes a slight lean towards favoring the gritty, serial-structured mood through its cutscene cinematics and general narrative alike, there’s no getting away from the studio’s renowned touch for the ridiculous. Yet it’s a welcome injection and levity of ludicrousness. The kind of ludicrousness that only compliments the fascinatingly, multi-layered tale being spun across its roughly thirty-hour main campaign. Judgment, while not entirely abandoning the murky underbelly of Yakuza crime-life with its grand, engrossing, twisting-and-turning tale — centering this time around a string of mysterious murders about the district — does still demonstrate plenty of what Ryu Ga Gotoku have become so good at in recent years. The end result may throw up a few too familiar touchstones, but the journey one takes is still worth it.

That aforementioned trait of the studio is of course in carving out a story that knows how to keep you fixed on where it’s going, complete with a grand assembly of likeable, interesting and well-rounded characters. Characters that extend beyond just main protagonist Takayuki Yagami whose own backstory is slowly drip-fed to the player via the interactions he shares with friends, rivals and would-be antagonists alike. A former disgraced lawyer, now living the private detective life who finds himself slowly-but-surely pulled into the events unfolding in the city and at points, called back into the events previous that made him give up his former profession. Even now, it’s rare for a studio to pull-off such a feat that is introducing more than a dozen (at least) recurring characters, yet never does it feel like Ryu Ga Gotoku have bitten off more than they can chew. 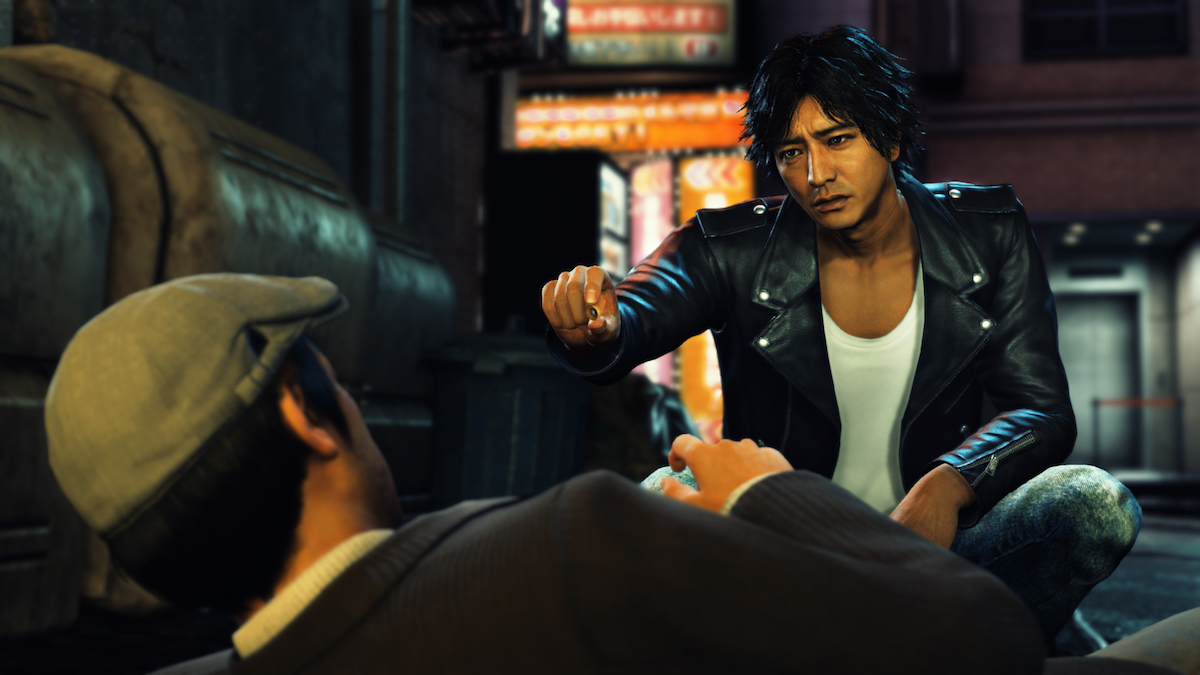 Especially for a brand new story arc and clean slate that Judgment offers — arguably the closest one can get to an entry point for those anxious about such an overbearing legacy that the Yakuza series presents. As such, Judgment’s positives go beyond simply the expected abundance of activities to partake in and collectible-like achievements to strike off. More so, it’s perhaps Ryu Ga Gotoku’s appealing to both old and new fans alike here where the game signals itself as another impressive package more than comfortable with the idea of standing alone amidst the studio’s many crime-thriller trips to inner-city Japan. It’s a relatively minor shame, though, that some of Yakuza’s legacy irks and nitpicks make their way into Judgment. For one, cutscenes and interactions between Yagami and secondary characters introduced through Side Cases and as new friends — one of the major new additions in the context of how optional missions are presented — remain lacking critical voice work or simply the means to feel anything but secondary material.

Limited only to shifting facial expressions and repeated sound-bites before, during and after crucial gameplay segments. The same, thankfully, can’t be said for the moments where Judgment truly makes use of the Dragon Engine and while its presence may not have the same impressive or radical upturn in quality as Yakuza 6 flaunted, that’s not to say that the technical competency is in any way less effective during major cutscenes. Small and subtle changes in facial expressions of certain characters driving home the narrative’s effectiveness as a tale you can’t help but keep entirely fixated on. Even the way scenes are particularly directed and how the game makes sure to make room so as to let key moments develop or merely linger, it’s part the reason why the story is so fascinating to sink into and Judgment — a new IP at best, a mere spin-off at worst — doesn’t hold back in delivering a conspiracy-drenched tale you just clamber to see the finale to. 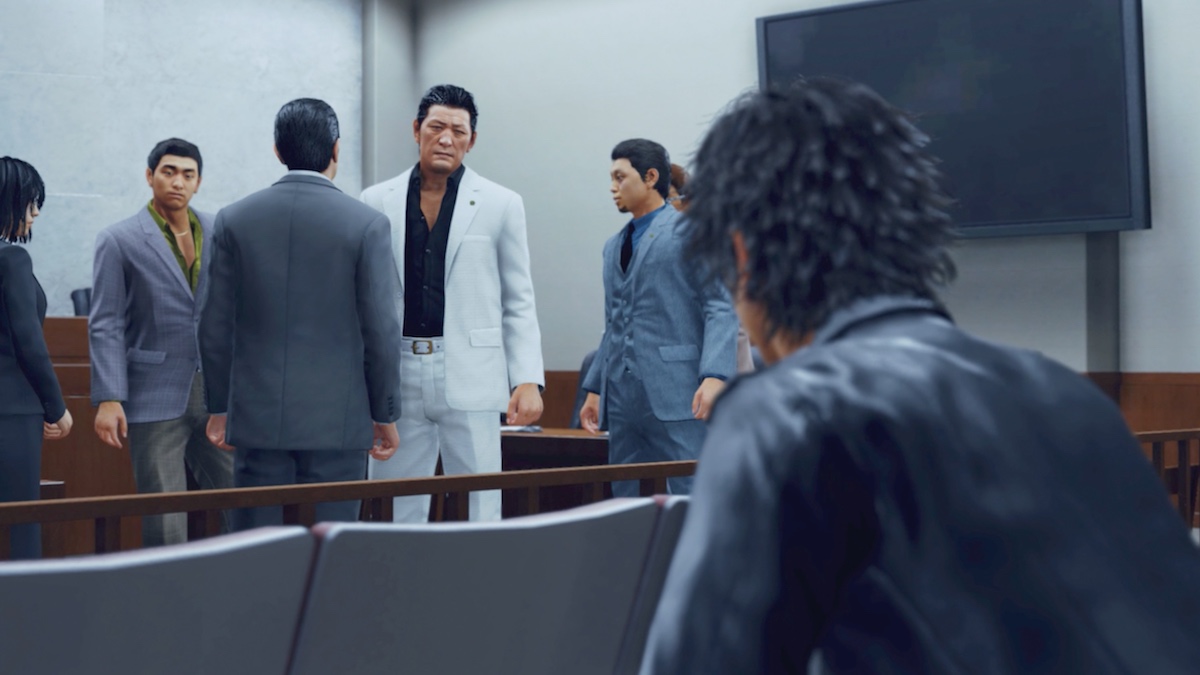 As far as gameplay goes, Judgment finds itself both revisiting and introducing completely new mechanics fans of the Yakuza series may already be accustomed to. First with its main combat, though the beat-em-up premise returns — knowing when best to incorporate blocks and evasive moves alongside the signatory over-the-top EX moves, which here replace the Heat Actions from Yakuza 6 — Judgment’s direction this time centers around two forms of fighting referred as simply as Tiger and Crane. Tiger allowing you to inflict more damage on a single foe (though it is possible, if positioned correctly, to strike multiple foes), while Crane specializes in striking multiple foes with lesser strength. In keeping with the Yakuza formula when Yagami stumbles into a fight with local street thugs (whom are somewhat more conspicuous this time round), there are of course environmental objects to use as weapons and a move-set that can be added to via unlockable abilities and skills both input and context-based depending on the situation.

But perhaps the biggest change to the formula comes in the form of the detective-orientated objectives. More importantly — and impressively — how the game manages to weave all these ideas into the geometry and design of Kamurocho itself without ever feeling like it’s radically changed the situation to accompany. Though some concepts are less-developed and slightly-more frustrating to control — the first-person detective work is shallow at best, with drone segments feeling awkward at points to maintain — the slower-paced tailing missions and frantic on-rails chase sequences, by contrast, offer up a welcome change of pace. Ideas that, thankfully, neither overstay their welcome nor feel over-represented over the course of the entire game, both via the main campaign or through the side cases alike. 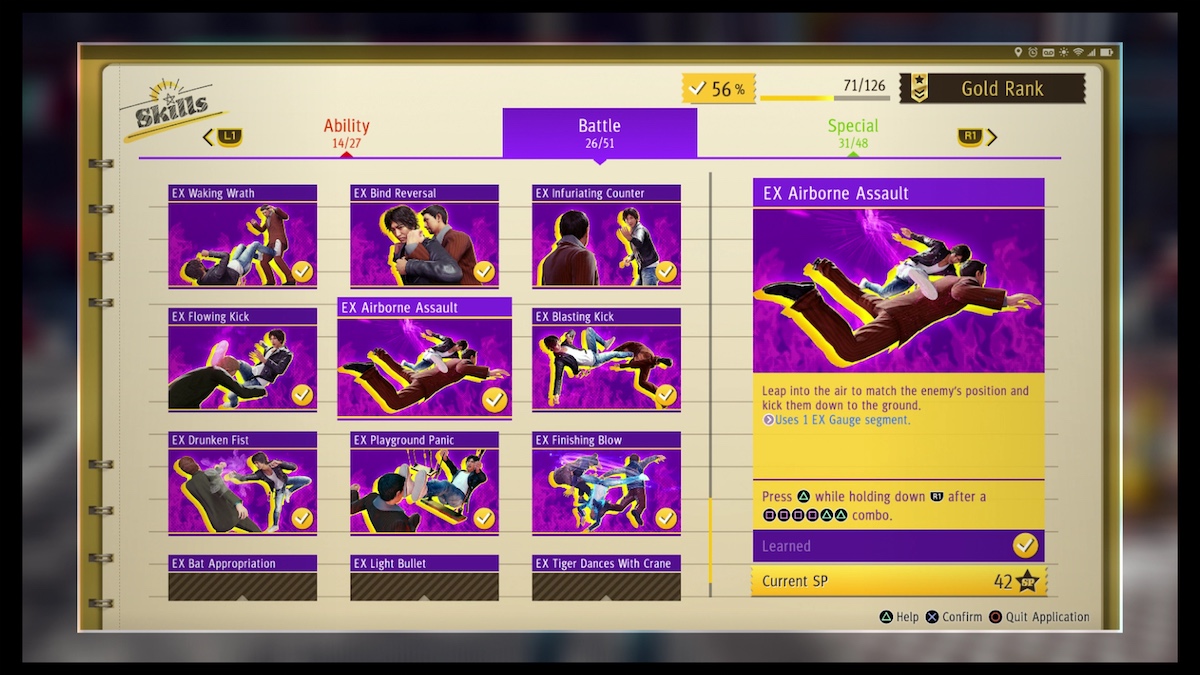 So far as upgrading goes, Judgment this time streamlines proceedings, ditching the multiple, five-part XP accumulation of the past along with the small, incremental steps that governed how much a player progressed in such a span of time. Instead, a more universal SP system (awarding you for practically every task undertaken in the game, no matter how small) takes the reigns, one that is used right across its three-part upgrade page. While there are some notably worthwhile investments such as the ability to leap-frog and counter opponents with follow-up strikes, the game is not without (once more) certain additions that ultimately feel present for the pure sake of having unlocks. Such things like highlighting which keys in one’s inventory unlock certain doors, comes off as rather pointless — there just to create the illusion of variety and choice.

Further to that, as much as Judgment once more shines in offering plenty of content for players to invest in — to the point one can almost forget there’s a main campaign to conquer — you can’t help but shake the feeling that the game almost works to contradict itself so far as encouraging people to discover optional side activities for themselves. One of the key changes in Judgement, in the context of side activities, is the notion that investing in places like convenience stores and restaurants will open up new friends to chat to and tasks with which they’ll need Yagami to complete. This is mitigated somewhat, however, by the fact that players will rarely feel the need to eat out and recuperate what little health they’ve lost via street battles or major story-based encounters alike. Even the major lethal damage mechanic — which, when afflicted, permanently decreases your health bar — can immediately be remedied by a quick visit to a nearby doctor for a small fee. Money, once again, rarely an issue; thus, a mechanic simply there to declare such a feature is present. 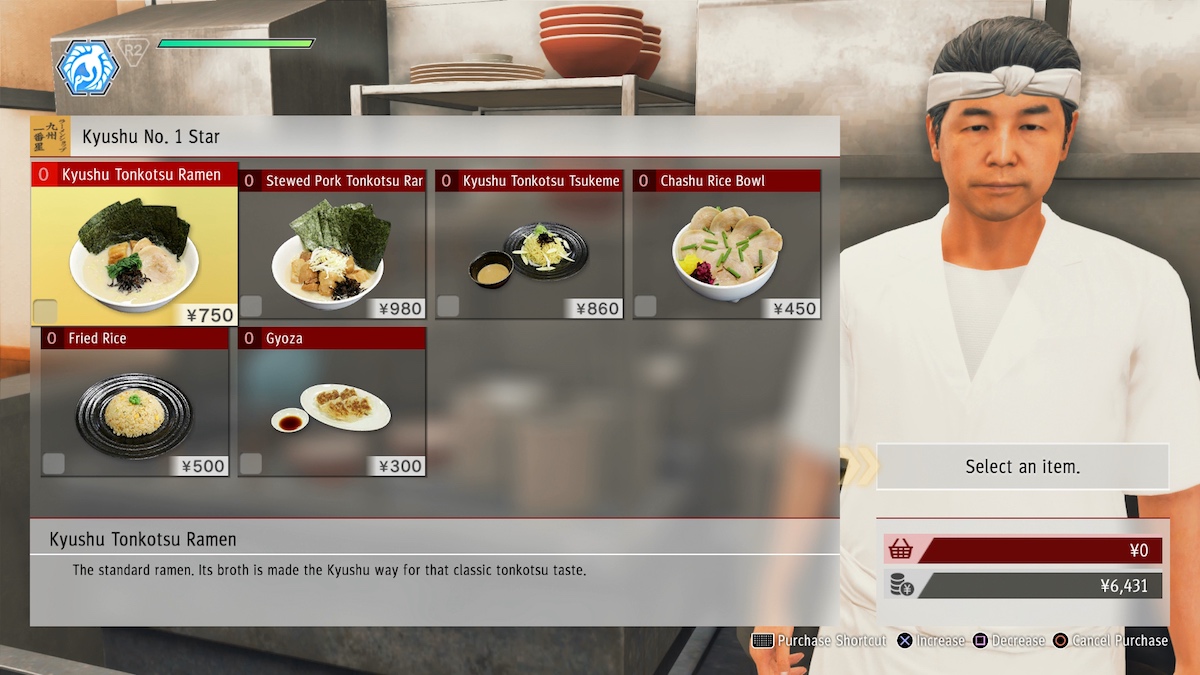 But as far as creativity and investment in such ideas goes, Ryu Ga Gotoku once again demonstrate an incredible knack for designing mini-games that can add justifiably sizeable sessions to one’s total run-time. While it’s a shame that such fantastic additions like last year’s SRPG-styled, overhead Clan Creator are strangely absent, it’s compensated sufficiently by new additions such as light-gun, arcade entry Kamurocho of the Dead at the Sega Arcade, a VR-rendered, Mario Party-like board game, and more notably, drone racing that uses the geometry and layout of Kamurocho to architect some genuinely enjoyable three-lap races with surprisingly-catchy background music to accompany.

Even the mere pinball machine found at Yagami Detective Agency’s main office shouldn’t go unnoticed. Taking up way more time than any pinball machines really deserves, it’s a testament once more to just how rich and varied these activities truly are. Regardless of how you use your spare time — some of which is forced on the player via the game’s many not-so-subtle pauses in the story, moments where the main narrative seems to take a breather in favor of something off-topic or unimportant — there’s still a certain delight in seeing the usually-calm and stoic persona in Yagami replaced by brief flashes of glee or excitement as he plunges into virtual reality or comes first in a drone race. Such an almighty contrast in presentation and delivery shouldn’t work, yet Judgment — like the series it leans on for resources — more than makes a convincing argument for both stances, the serious and the not-so-much, co-existing. 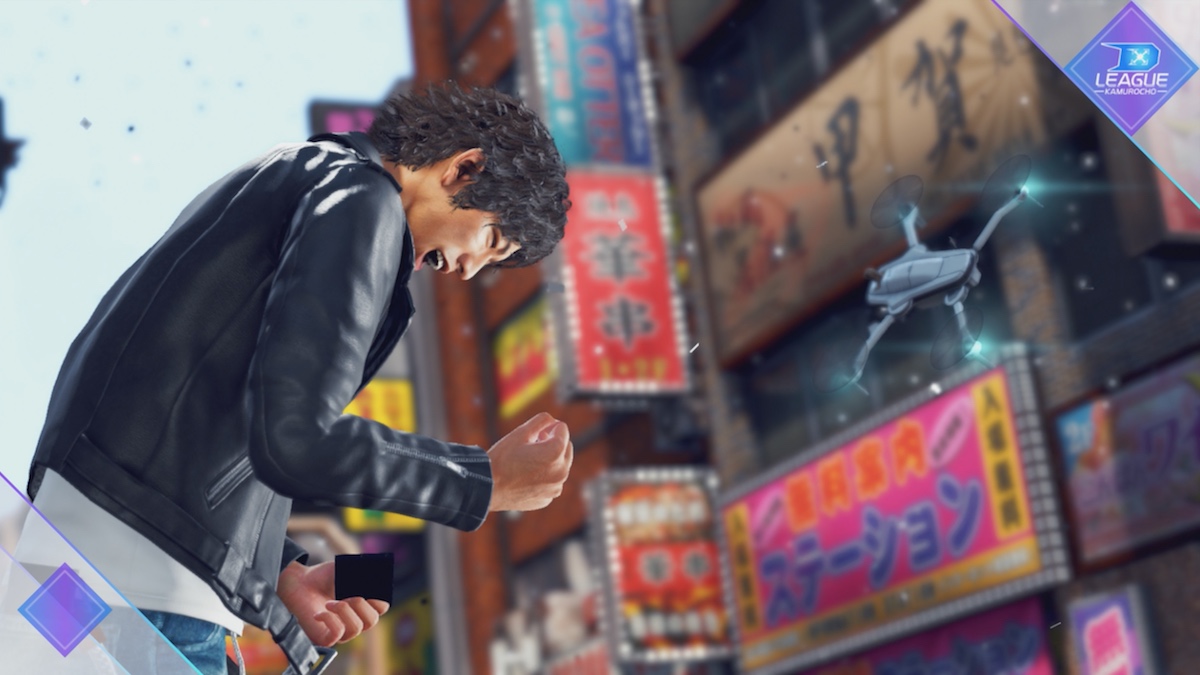 There’s an argument to be made that Judgment does at points let the familiar get the best of itself — confusing the mere sake of additional features and mechanics for those that genuinely feel like fresh changes. While its gameplay additions, those that cater towards the more detective-orientated style of play and presentation, can feel like a mixed bag of shallow and interesting deviations alike, it’s but a minor crease in a game that once again excels both on its content and the knowledge on how to use it. A story that is engaging, intriguing yet thoughtfully structured, complete with another grand cast of new characters, even when it risks of becoming too pedestrian, Judgment predominantly finds the means to keep players fixed on the events unfolding. Fans of the Yakuza series may be quick to filter out what’s genuinely new from everything else, but for a game as packed and as entertaining as this, what it may lack in pure originality, Judgment more than makes up for with a game that is as fun to engage with as it is to just sit back and watch as the now-commonly bizarre antics of Kamurocho play out to delightful and convincing effect.